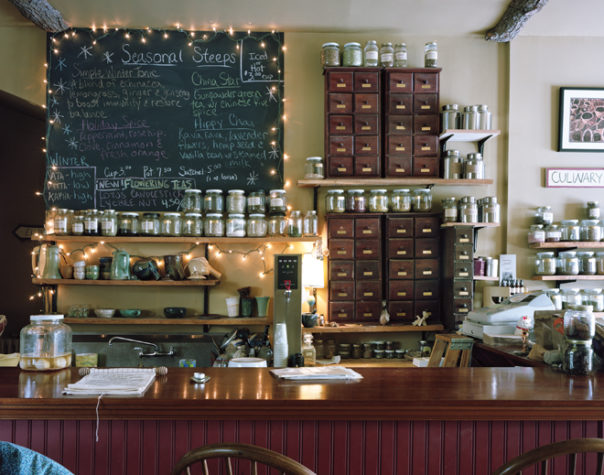 Sarah Richards has been blending teas since she was given a medicinal herb encyclopedia at the age of twenty. She opened Homegrown Herb and Tea in Portland in November 2006.

The Congress Street shop is part teahouse and part apothecary. Studies of both Ayurvedic medicine and Western herbalism have greatly influenced Richards and the philosophy behind her tea concoctions. Simple meals are served in the snug shop, but Richards intends the food to be secondary to her custom blends. Each cup of tea is meant to be a unique preparation for each person, Richards explains.

Teas are blended on the dry counter surfacenot even lemon or fresh ginger come near this pristine space. The herbs closest to the counter are arranged by frequency of use, and those in the ladder- accessible drawers above are arranged alphabetically. The jars are grouped according to their medicinal commonalities. Herbs are blended following an ancient apothecary formulaits my secret, although I didnt invent it, Richard notes.

Richards uses local sources or grows her own herbs whenever possible. Her brother has spent several years clearing and preparing land on the New Sharon farm where they grew up, and this summer they will plant an extensive herb garden. Herbs are sold in bulk at the shop or mixed into blends.

The water heater is the only kitchen appliance in the shop larger than the
small Crock-Pot Richards uses for soup. She requires the water to be heated to 212 degrees, but most water heaters do not dispense boiling water. Richards had Bunn technicians come to calibrate the heater when she opened the shop.

Sarah Sorenson-Coppi of Earth and Soul Pottery in Portland designed all of the teapots and teacups. The teacup design classic but oversized, with a flat saucer was made specifically for Richardss shop, where the teacup serves as vessel for both steeping and serving.

The tea is steeped in unbleached acacia- pulp sacks. The tied sacks have become Richardss signature, and they make
her blends recognizable in the Portland restaurants that serve her tea.

There is always a jar of pickled eggs on the bar. I love them, says Richards, and they are a huge hit. Food in my shop may be simple and little, but you get a huge cup of tea.