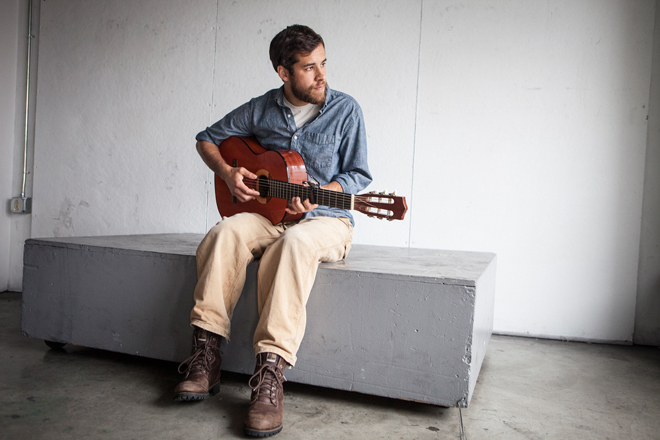 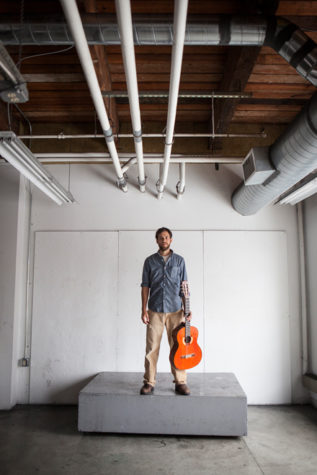 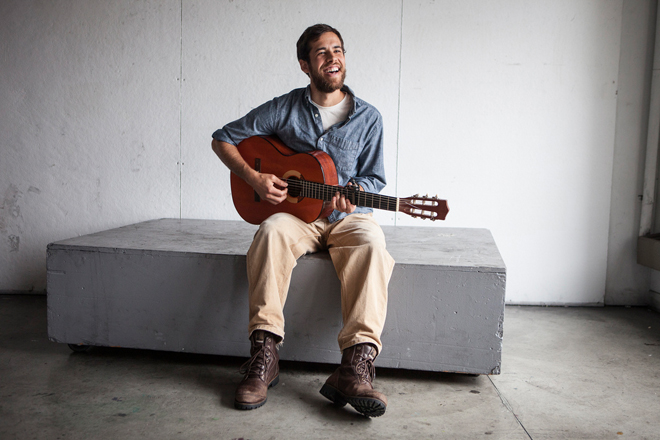 Max García Conover grew up in western New York, moved to Maine to go to college, and has since settled in Portland. Confession: I’ve known Max since first grade and loved him since tenth. His newly-released album, Burrow, made a splash at the office and I was asked to interview him for this column. Of course I said yes. I’m looking forward to hearing him play at this year’s Kennebunkport Festival.

What made you first want to become a musician?

I was always really interested in music, interested in good songs, but even more than that I wanted to be the person who wrote the songs. It took me a long time to learn how to play the guitar, a long time to figure out how to use my voice. What ended up coming naturally was crafting lyrics. Through persistence the rest fell into place and my style is a result of all of that: mostly acoustic with lots of rhythmic finger picking and lots of words.

What were your first experiences playing for people?

I was in Puerto Rico, living in my grandfather’s apartment for the summer. I didn’t speak Spanish well enough to get a job, so I decided to start busking on the streets in Old San Juan. It was a good way of getting experience playing for people without much risk, because most people seemed happy I was there but no one was really listening.

How has your own learning experience impacted the way you teach?

I attribute my success as a musician to doing things over and over again and for some reason believing I could do them, even though I really couldn’t for a while. I try to be that person who believes in my students enough to get them to put in the work it takes to improve at something. I probably have the most to offer those students whose talents might be buried beneath the surface.

Portions of sales from your past releases have gone to charities.

Yes, all sales from my last EP went to the Chewonki Foundation, and a portion of proceeds from my new album go to Evergreen Health Services, a nonprofit working to bring medical services and support to people living with AIDS. Both causes are personal to me and relate in some way to the albums I paired them with. There’s so much self-promotion and marketing that goes into being a musician, it’s a little easier if that work is in some way connected to something bigger.

I write the guitar and vocal part before I write words. I draw on what I’ve been thinking about recently, what turns of phrase have stuck with me, whatever I’m reading at the time. I go to poetry for its exactness and clarity to get inspired lyrically. Often the meanings of my songs are purposely fuzzy but the physical setting is more or less in focus. I write songs that put me in places I’d like to be, like the woods behind my house growing up.

What would you say your album is about?

The album is about digging into the world through the art that you make or the work you do, about how you orient yourself to everything else. I think you do that inevitably through the way you choose to live and the job you choose to do and how you choose to treat other people and all of that kind of stuff, but I think making art is sort of unique in how deliberate it is.

What has performing, specifically, brought to your life?

I’m an introverted, quiet person in regular life. For a while I wanted to be a speechwriter, and then I wanted to be a writer of novels. Then I started writing music. It turned out I loved performing, and I was really suited for it in some ways, which I think speaks to the complexity of people. We come up with words like “shy” to describe people, to make us feel like we understand them, but everyone is bigger than those small descriptions.