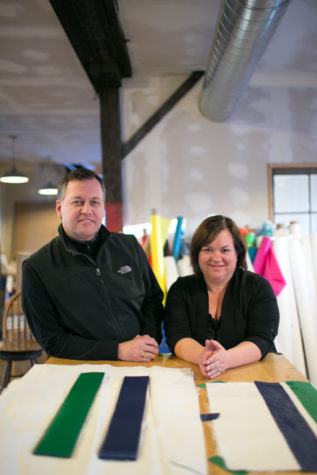 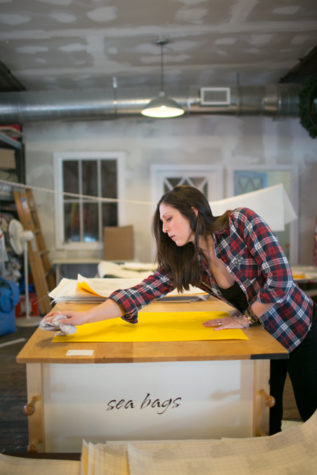 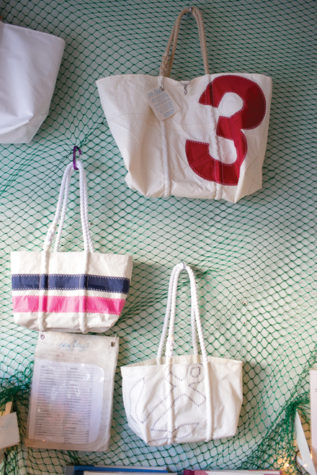 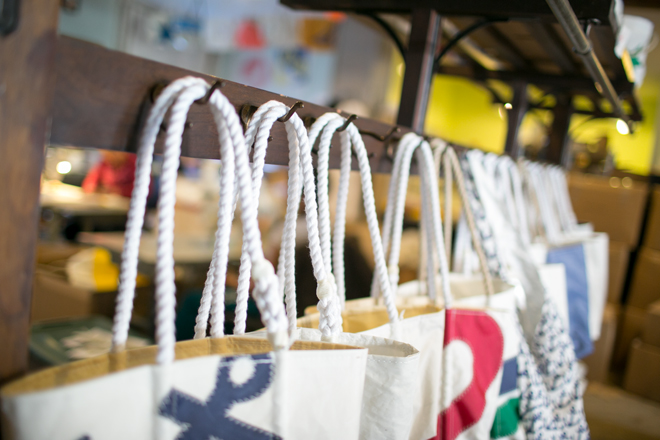 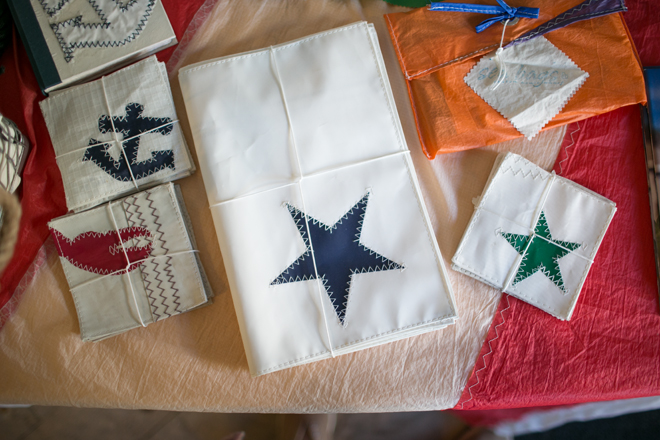 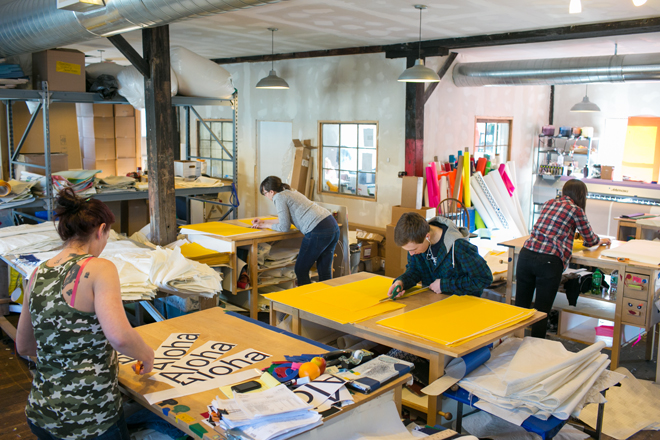 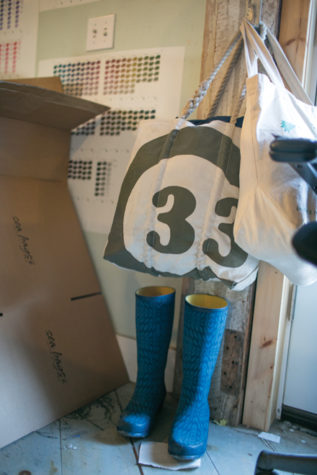 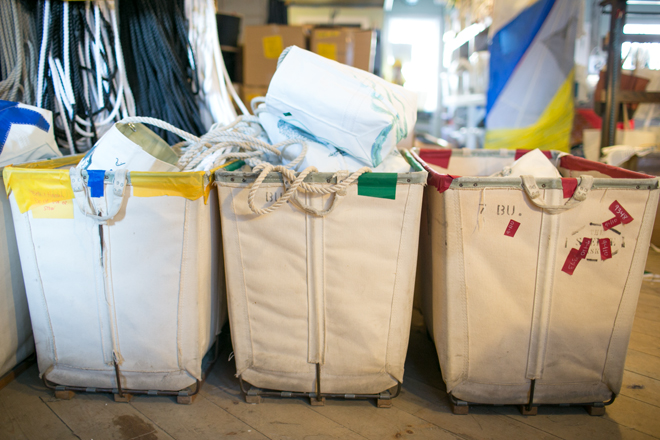 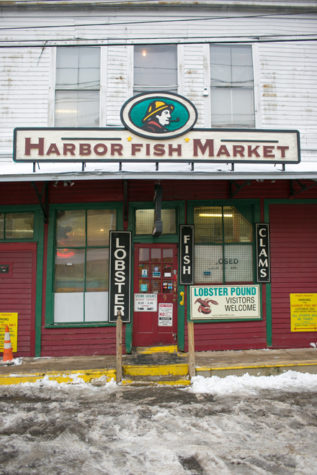 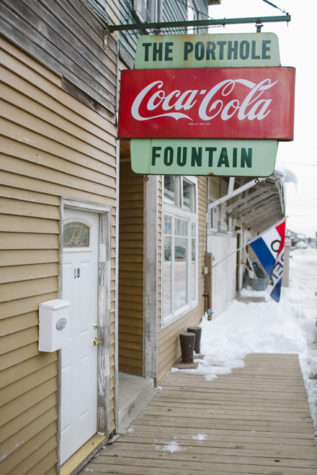 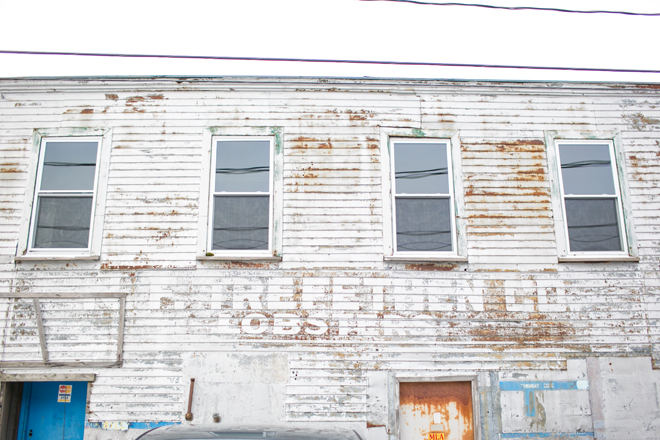 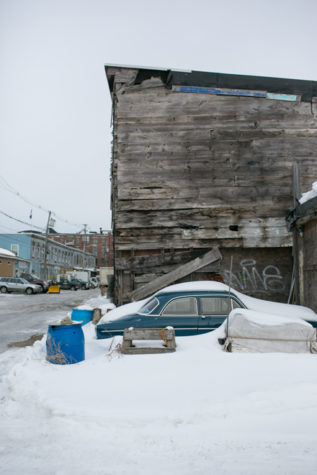 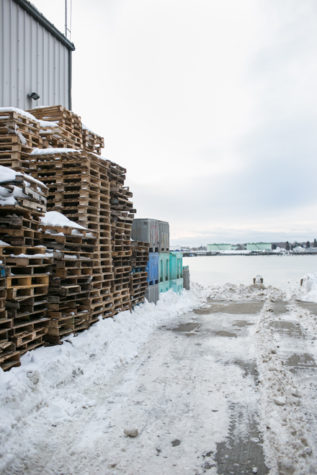 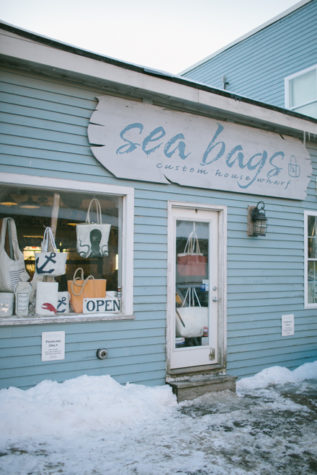 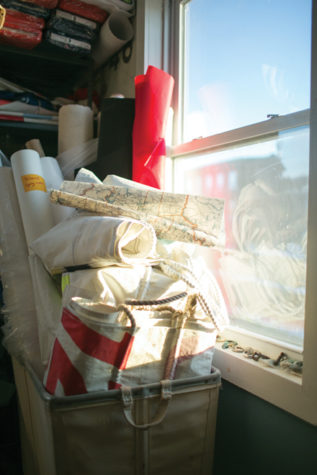 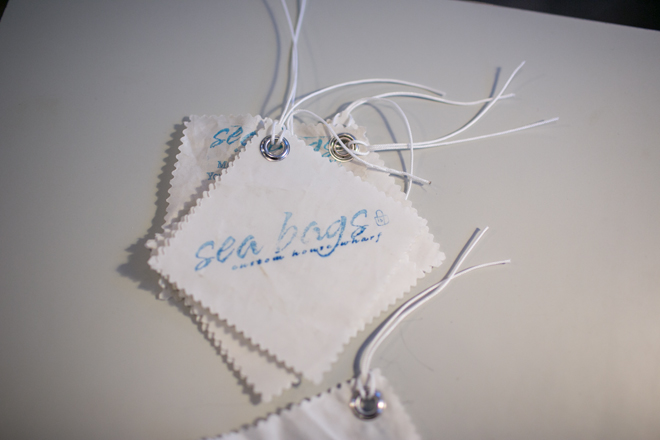 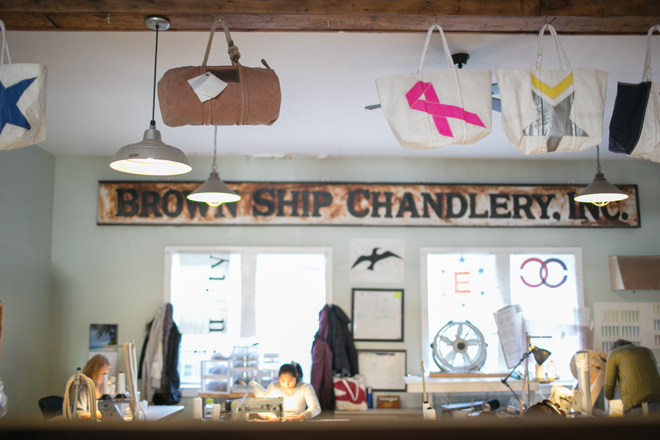 Hard at work in the Sea Bag headquarters. 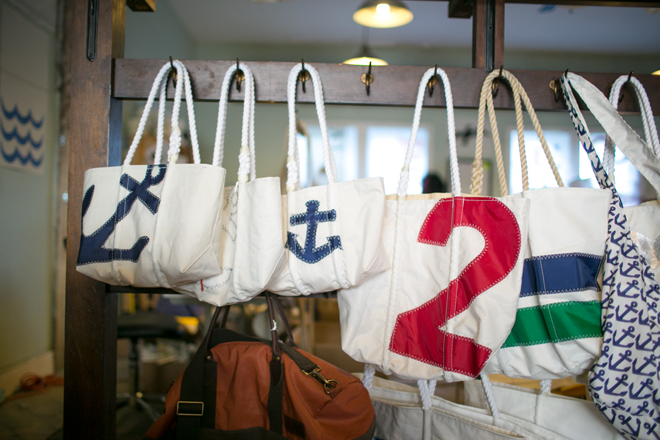 The Sea Bags line of tote bags are made from recycled sails. 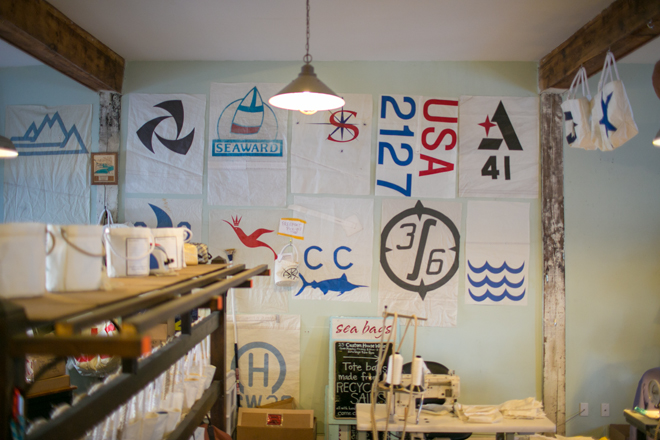 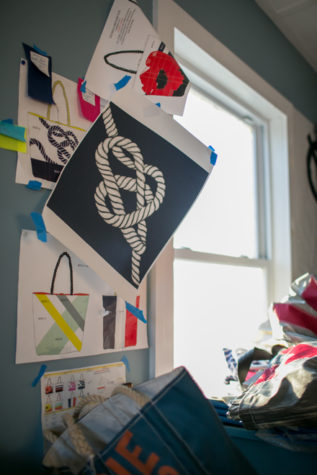 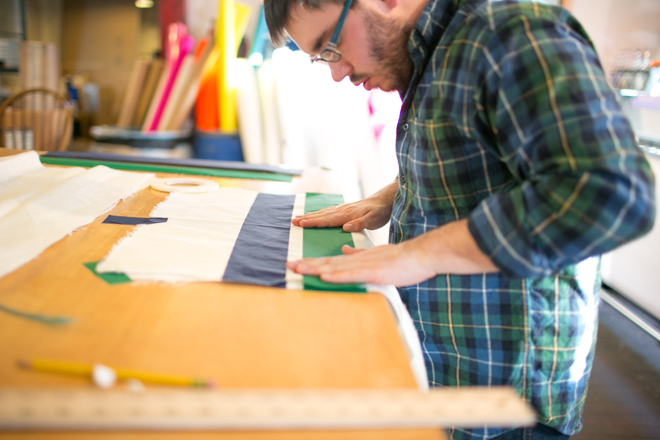 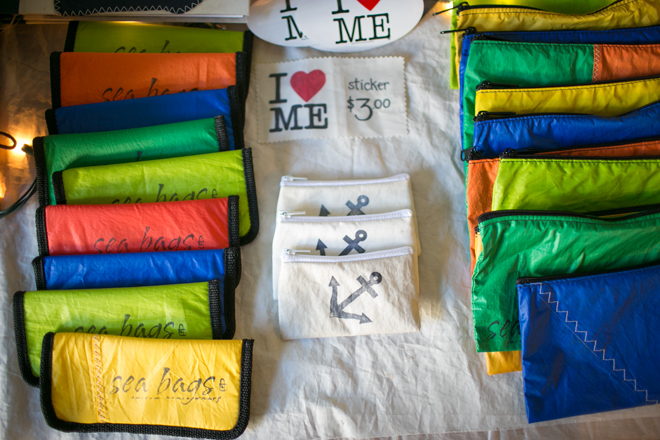 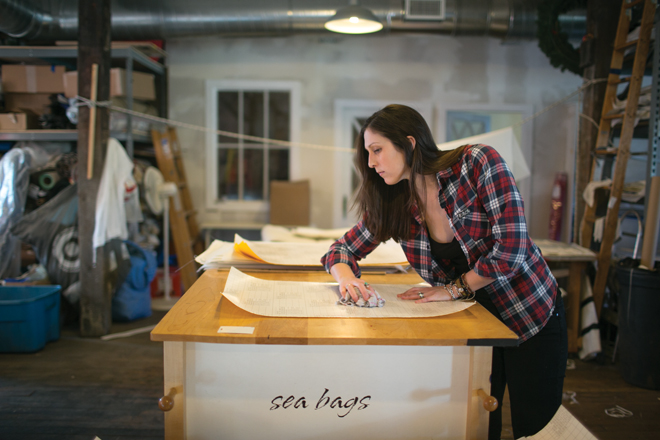 Jillian Mavodones prepares materials that will become part of a finished tote. 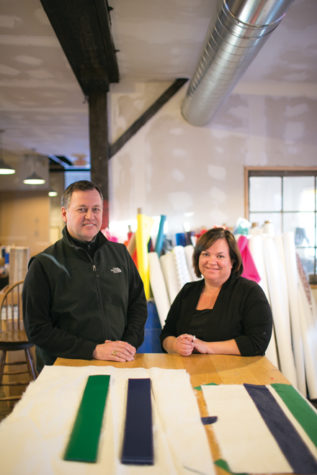 Sea Bags: Made in Maine

Green in Product and Practice and Made in Maine

Durable, practical, simple—like Maine itself. These are the qualities that go into every square inch of each hand-sewn product manufactured by an assortment of 30-something craftspeople at Sea Bags on the Portland waterfront.

For those who do not know Custom House Wharf where Sea Bags is located, you might want to imagine the setting of Steinbeck’s Cannery Row, which first made fish-stewed-and-strewn, pot-holed working waterfronts famous. Part way down the wharf, just beyond the Portland landmarks of Harbor Fish and Boone’s Restaurant, you enter the storefront which leads you into the world headquarters of Sea Bags, a company that has thrived in this archetypal marine setting—perhaps because of it—and managed to turn out 42,000 units from a cramped first floor space in 2013.

Fourteen years ago, Sea Bags was first in the market to sell handmade tote bags sewn from recycled sails. It was a small operation that employed founder Hannah Kubiak and one of her close friends. By her own admission, she kept “very Hannah-like hours” and made enough to pay the bills. Then one day in 2006, Beth Shissler wandered into the Sea Bags shop and found Kubiak there. Beth wanted to buy a number of bags because she loved the fact that were made from recycled sails on a wharf in the heart of Portland’s working waterfront.

To understand what happened next, you need to understand that Beth’s family came from the small island community of Isle au Haut, perhaps where she acquired a penchant for thrift.Shissler wanted a discount, which Kubiak saw no point in offering. Shissler had left Maine, like so many others, to pursue her education, including earning an MBA and working for a global company in the semiconductor industry. But she dreamed of coming back home and putting her skills to work. Shissler may not have gotten a discount on the Sea Bags, but instead started a discussion with Kubiak that soon led to a productive business relationship whereby Shissler became the co-owner of Sea Bags and Kubiak got agreat business partner.

You still enter the world headquarters of Sea Bags through the same door off the same narrow alley of Custom House Wharf. But now Sea Bags has tripled the size of its manufacturing space by expanding into the second story of the building. And upstairs sitting across from Beth Shissler is her business partner, Don Oakes, who until relatively recently had been senior vice president at L.L. Bean in Freeport, and bought into the company with another L.L. Bean retired senior manager, Fran Philip, at the end of 2013.

Like Shissler, Oakes grew up in Maine—in the town of Milo, almost as small as Isle au Haut, but further north, in the shadow of Mount Katahdin. After graduating from the University of Maine, Oakes also got an MBA (his from Harvard), but after several successful job postings in southern New England, he yearned to come back to Maine. As Oakes puts it, “Most people I worked with came to Maine to work at Bean’s; I came to Bean’s to work in Maine.”

For 12 years, Oakes was responsible for the “look and feel” of L.L. Bean’s marketing—especially its catalog and website. Fran Philip, former chief merchandising officer at L.L. Bean, was a long-time colleague of Oakes, and continues to focus on helping build brands as a board member of retailers, Vera Bradley and PacSun.

After 20 years at Bean’s, Oakes wanted to put his energy and experience to work to help other businesses in Maine grow. He looked at everything from startups to silent investor opportunities, including several in the middle part of the state, but ruled out going back “to the big city, where anything I did would just be a rounding error.”

When Oakes first met Beth Shissler, he thought to himself, “This is too good to be true—taking something that would otherwise end up in a landfill and adding value to it to make something that people will want. You could not make this up.”

Shissler recalls that over the years many business people had approached her about some form of investment in Sea Bags, but she had never been much interested in their ideas. Access to capital was not an issue for the company, because Sea Bags had a good relationship with its bankers. Several of those who approached them suggested “offshoring” the company’s manufacturing in China to reduce manufacturing costs. But Shissler and Kubiak were dedicated to their employees, proud that a third of them had been working for Sea Bags since its second year.

Furthermore, they were never going to stray from the three cornerstones of their business: green in product and practice, made in Maine (on a working waterfront), and being involved in their community. They put these values to work every day. “When we needed furniture,” Shissler recalls, “we found it used or free.” Sea Bags’ windows came from the Porthole restaurant across the way on Custom House Wharf and the doors  on the small (thrifty) office space she shares with Oakes came from Boone’s Restaurant on the other side of the wharf. “Used is better than new,” says Shissler, and the record of success of the company suggests a lot of customers agree.

But Shissler was “out of bandwidth,” as she puts it, as president of Sea Bags. She felt like a lot of people running small companies, especially as they go through the growing pains of success. “I was playing whack-a-mole all the time,” she said. “We needed more people; we needed benefits; we needed more space.” So when Don Oakes and Fran Philip came knocking, Shissler was willing to listen—sort of.

She was very clear that the most important thing to figure out about a prospective partner was whether they “shared the vision?” Do they have the right values? And she had not yet met anyone who fit the bill. But after eight months of intense discussions around the big questions described by Shissler as “Would we, could we, should we,” she became convinced that the three of them had the complementary skill sets she was looking for. She instantly discovered in Philip a shared passion for branding. And among other qualities, she appreciated that Oakes was as thrifty as she.

Oakes was just as excited. “Fran said she was busy and volunteered that I would be willing to work in the business.” Thus Shissler will continue in her role as president with the additional responsibilities of chief sustainability officer, while Oakes has assumed the role of CEO. Philip will serve as an advisor and Kubiak will retain her title as founder and part owner, but is not involved in running the business day-to-day.