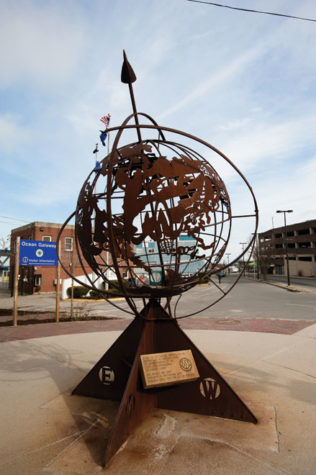 A Global View of Maine: The Portland Armillary

The history of the armillary sphere as a piece of scientific equipment dates back to approximately 200 BCE, when the Greek mathematician, astronomer, and poet Eratosthenes created the first of these structures. Designed to chart the earth, stars, and solar system, this device was once the primary instrument used by astronomers to visually conceptualize the heavens. While the invention of the telescope made these complex ringed objects nearly obsolete, the desire to depict our world in three dimensions lives on, as evidenced by the Portland Armillary, Maine metal sculptor Patrick Plourde’s striking rust-red steel sculpture that marks the trailhead of the Eastern Promenade near the Maine State Pier.

While the first armillary spheres were intended to describe the solar system, this piece serves a more symbolic purpose. Instead of displaying stars and planets, the sculpture is shaped like the earth, with land masses represented by familiar pieces of Maine iconography. Fish, crabs, sharks, and seashells float neatly alongside a pine tree, a skier, a lighthouse, and even an L.L.Bean boot. These disparate shapes come together to create a representation of the globe that any grade school child could recognize. And yet this earth, with its loons and lobsters, is clearly a world seen through the rosy, saltwater haze of Maine.

Installed in 1999, the Portland armillary is officially untitled, though it is most often referred to as simply “the globe.” Funded by the Casco Bay Sunrise Rotary Club, the object was a gift to honor Portland Trails, which in turn donated the piece to the City of Portland. Today, this sculpture (and functioning sundial) stands as a reminder that, while not the center of the solar system, Maine is more than a place. For some, it’s a way of seeing the world.