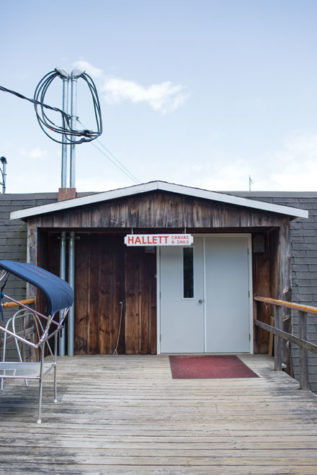 Hallett still lives on the same property as Handy Boat. 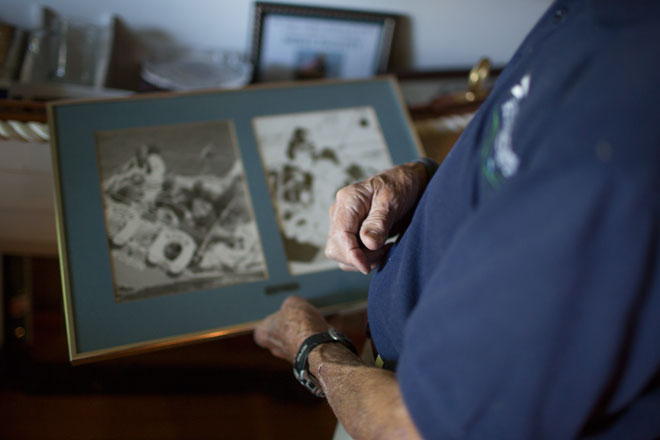 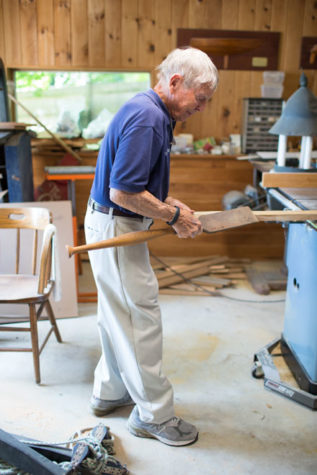 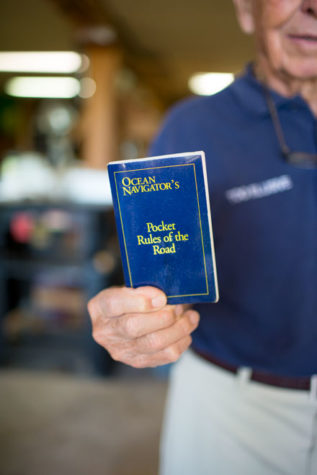 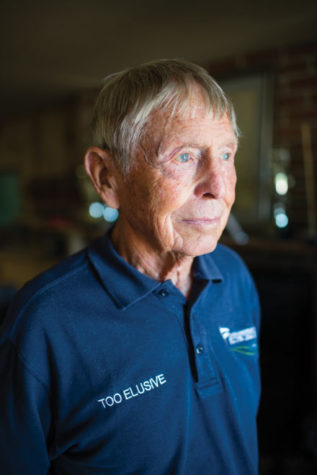 Merle Halletts life has been filled with long days on the water, and short summer nights at sea. 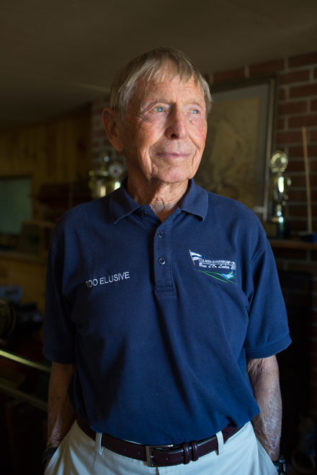 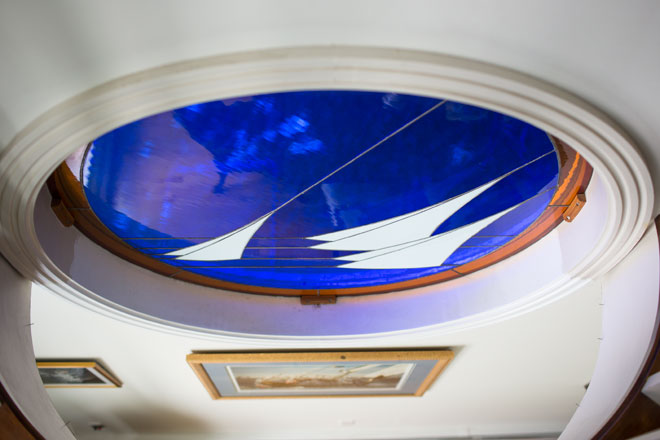 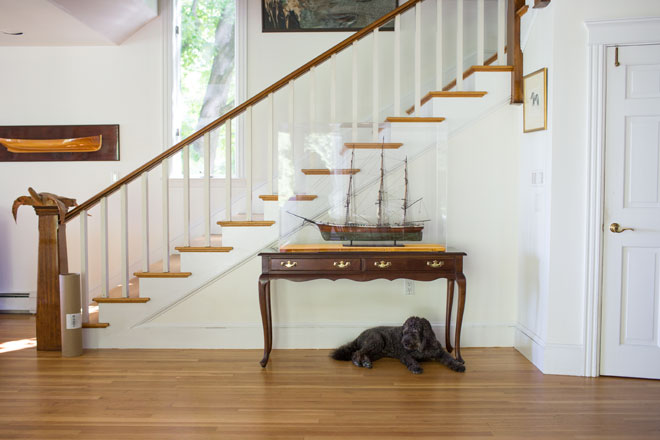 Inside Hallett's beautiful home, where the nautical theme reigns supreme. 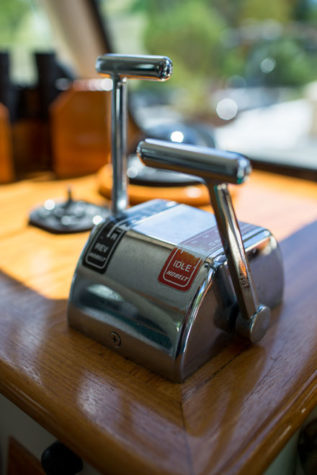 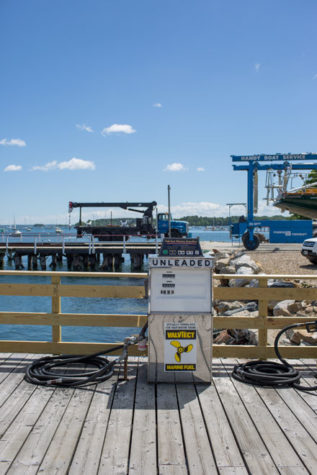 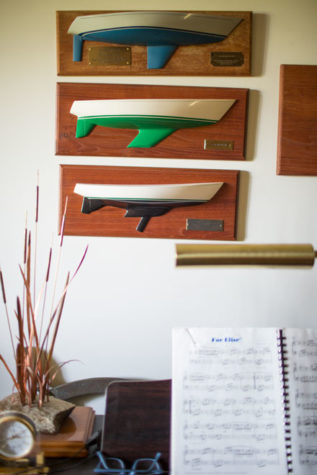 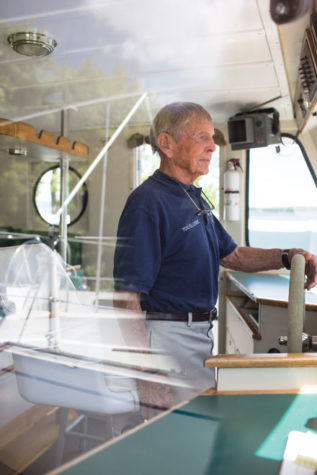 Merle at the helm 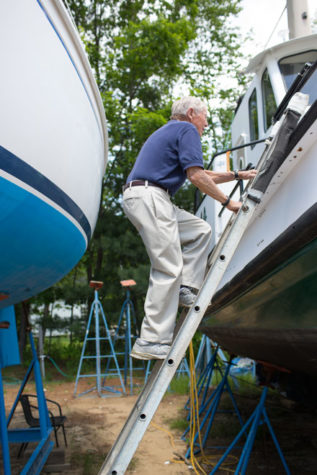 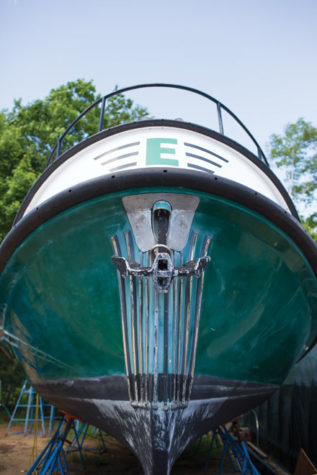 In Hallett's front yard, the Scaramouche waits for warm weather. 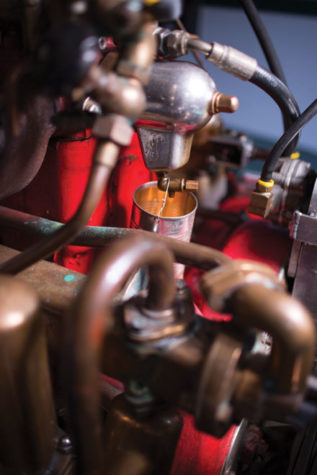 The mechanics of a seafaring vessel. 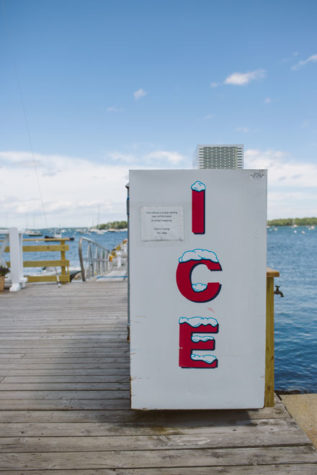 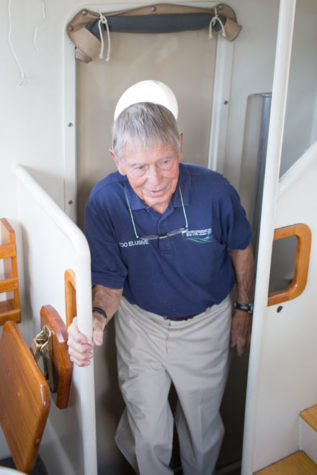 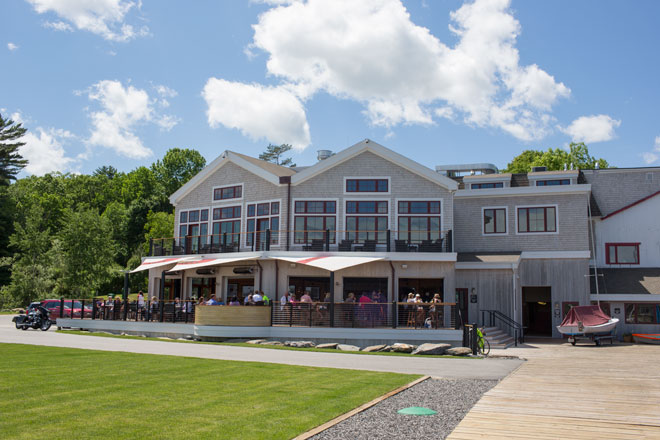 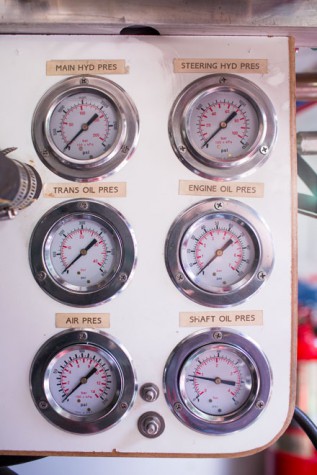 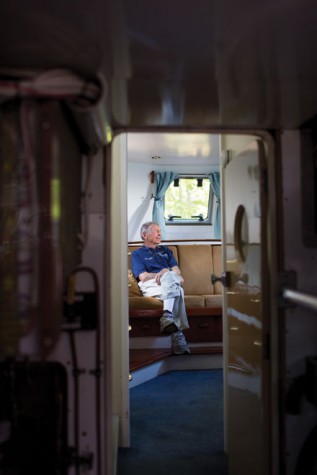 At ease in the cabin 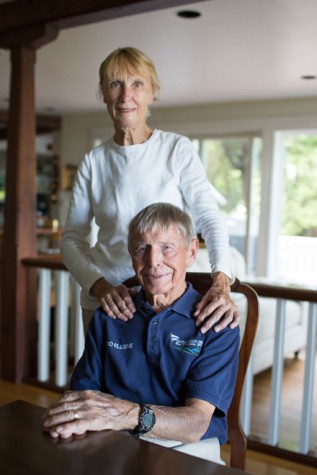 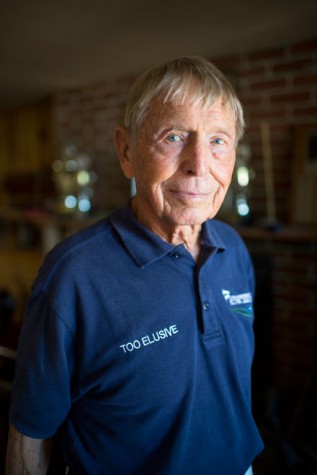 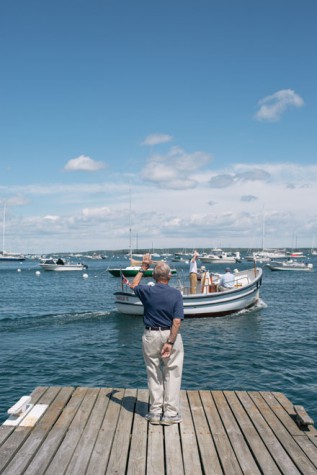 Hallett waves off a cruiser as they head out into the Casco Bay. 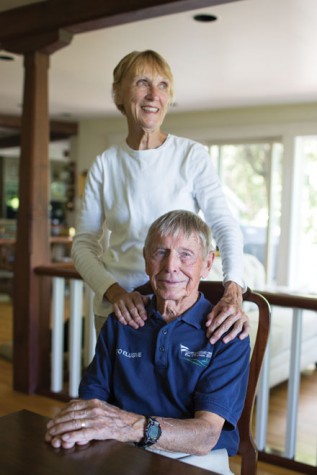 Merle and Barbara pose together.

The ABCs of Sailing and other nautical tales from the man who built Handy Boat.

A person’s house can tell you a lot about them. The things they accumulate, the mementos they keep, the art they surround themselves with—these items all hold stories. In the case of Merle Hallett, former owner of Handy Boat and longtime sailor, his space reflects a life well lived, filled with memorable races, treasured friends, and many, many different boats.

His Falmouth home is filled with pictures of boats, sculptures of boats, carvings of boats, and drawings of boats. Tugboats, schooners, catboats, dinghies, and canoes—if it’s seaworthy, he’s mastered it, as evidenced by the room full of trophies that flanks his foyer. An avid racer, Hallett has sailed all over the world. He’s navigated the icebergs off Newfoundland and cruised the turquoise waters of the Caribbean. He has collected burgees from various yacht clubs and sailing organizations, many of which have made him an honorary member. One banner depicts a dollar sign festooned with white wings. “That’s what happens when you have a boat,” he laughs before the punch line: “money flies.”

The son of a grocer who lived on Munjoy Hill, Hallett is the first to admit, “I didn’t grow up this way.” “Tell the story of your first trip,” his wife, Barbara, urges from across their kitchen table. We’re sipping large mugs of coffee, and my eyes are wandering around the living room. It’s a welcoming home, immaculate and polished, in that Maine way. Barbara apologizes repeatedly for the mess—“We’ve just returned from Florida, you understand,” she says—but I don’t see a mess anywhere. Everything seems to be in exactly the right place, from model boats to heavy earthenware mugs. I’ve only just met Merle and Barbara, but I can already tell—by their warm hospitality, their polite attentiveness, their quiet, easy smiles—that they are the type of New Englanders who project a sense of reserve and dignity, cushioned by the ritualistic gestures of niceness, that belie vast reserves of kindness.

“When I was in grammar school,” Hallett begins, “we could get copies of Popular Mechanics and Popular Science for 25 cents. Those were my favorite magazines. One day, I read an article called ‘The ABCs of Sailing’ and I just kept thinking about it.” It was the 1930s, and Hallett didn’t know the first thing about boats. But his neighbor, Frankie “Whistle” Woods, did. Whistle Woods worked on the Casco Bay Lines and “always had fish chowder going on the Shipmate stove,” Hallett recalls.

“One day, we were walking on the beach on Peaks Island looking at the boats. I said ‘gee, I would love to sail.’ And he looked at his boat and said, ‘sure, you can take her out for 25 cents an hour.’” The next day, Hallett spent the entire afternoon on the water. He spent a few quarters, and gained a passion that he would pass along to his children, and later, to their children. So begins a love story: a lifelong romance with the ocean and all the vessels we have found to tame its wild tides.

It wasn’t enough to borrow a boat for a few hours a week. A love like Hallett’s requires a greater commitment. He set about building himself a raft, then a boat, then another boat, and another. He would go on to own and run Handy Boat in Falmouth, succeeding its founder, Harold S. Sawyer, who started the boatyard in 1934.

It took years for Hallett to get to that point, however, and many more years before he retired to his home (formerly the home of Harold S. Sawyer) just minutes up the road from the marina. In between, he took many different jobs: he was a door-to-door vacuum salesman, a ski instructor at an all-girls school, a loan officer, a repo man, a refrigerator salesman, and, for extra cash, a musician in a “girl-guy-dance-band” he formed with a few buddies during World War II. By the time he was a junior in high school, Hallett and his band could “blow the roof off the place.” They played weddings and school dances, fancy events and low-key parties. “I fed my kids with that,” he says with deserved pride.

Inside Hallett’s beautiful home, where the nautical theme reigns supreme.

Talking to Hallett, it’s easy to get sidetracked, to go off on tangents and to stay there, splashing in the pools of memory. He tells me about how, as a child, he would let the tides carry his handmade raft out on the water, to be towed in again by a local lobsterman. He shares an anecdote about sailing during World War II, when everyone on the water had to carry identification cards on them at all times. He describes one memorable night in high school when he bumped his boat into the hull of a destroyer and was towed home by the United States Navy. “I can’t count how many time we were brought home by the Coast Guard,” he says, laughing.

Hallett’s stories are peppered with references to eras long past, ships that are no longer in the water, and people who have long since moved, or died, or both. As he leads me through his home, he points out notable people he has sailed or worked with: Guy Gannett, the Bush family, George Burnham of B&M Brick Oven Baked Beans, Danny Wellehan of Sebago shoes. It’s a who’s-who of Maine history, and a testament to the pull of Handy Boat and its importance in the boating community. What started as a small boatyard—just a “strip of road and a shed for cars”—has grown to include a restaurant, a boat repair business, a gift shop, and of course, the busy anchorage. “When I started, you could buy a lobster roll for 50 cents, but that’s about it,” Hallett remembers. Now, you can spend hours at the beautiful Dockside Grill, dining on whole steamed lobsters, plates of haddock and scallops, and pan-seared steak with chimichurri sauce.

“Hallett really changed the place here,” says Brent Sullivan, who has worked with Hallett for the past 17 years. “Everyone here has stories about how he turned the place from a tiny operation into a thriving waterfront. The whole restaurant, the big building, these are all things he built or added to.” He continues, “You know the whole front lawn area? That was all water. Hallett salvaged an old barge and brought it here, sunk it, and backfilled it. He had rock brought in and filled in the whole area. That might be illegal now, but at the time, people just saw it as improving his property.”

The bustle of the boatyard is the perfect antidote to any dreamy ideals one may hold about sailing. There’s still magic here, but it’s real and rooted, born of hard work and worn with age. Here, people cut sails, repair engines, fix hulls, and work the docks. And everyone knows Hallett. Although he is no longer the owner of Handy Boat—he sold the business in 2008—he keeps an office in the main building. His children and grandchildren work for Handy Boat now, and it very much feels like a family business.

Merle reflects and reminisces while going through old photographs.

How did that kid, who knew nothing about sailing save what he read in a magazine he bought for a quarter, come to own one of the most recognizable boat yards in Maine?  “I was keeping a schooner here,” he starts, “I was making $80 a week working at the bank, but I decided to come out here, where they would only pay me $45 a week.” He took the big pay cut and began doing “real nasty work”: cleaning and sanding the underside of ship’s hulls. One day, Hallett mentioned to his boss, Harold Sawyer, that things would go much faster if they had an electric sander—plus, he wouldn’t spend so much time with wood dust falling directly into his face. “He just looked at me and said, ‘we’re charging by the hour,’ and handed me two more pieces of sandpaper.”

Despite the nasty work and poor pay, Hallett was happy. He was in his element. Eventually, his dedication paid off, and when Sawyer was looking to retire he put a stipulation in his sales documents: No matter who owned Handy Boat, he wanted Hallett running the boatyard.

For years, that was the arrangement. Under the new owner, Fred Felton, a wealthy man in the distillery business, Hallett worked to improve and expand Handy Boat, all the while building his own reputation as a racer to be reckoned with. As trophies piled up—Hallett has won the Ensign Class National Championships, and he can’t even remember how many times he’s sailed in the Monhegan Island Race, much less the number of times he’s won—Hallett continued to expand the reach of Handy Boat, becoming further entrenched in the Falmouth business. Felton, who had relied heavily on Hallett’s knowledge and charisma since the beginning, came to Hallett one day and said: “Hallett, you’re the logical guy to own this place.” They both knew it was true, but they also both knew Merle was two pennies away from being broke.

On the advice of a friend whom Hallett describes as a “real, true Harvard man,” Hallett decided to find investors. He approached Charles Morrill of B&M Beans, with an offer for preferred stock. Morrill listened to Hallett’s proposal, and finally said: “There are two things I believe in, Hallett, supporting the church and supporting the boatyard.”

In 1966, Hallett purchased Handy Boat from Felton. “I still go down there every single day,” he says. As we walk, he points out his boats. Since childhood, when he built boats and christened them with colorful names—Cinderella, Rowdy, Scaramouche—Hallett has always owned at least one boat. He still races. He still takes his kids out, and his grandkids, and, of course, Barbara, his wife of 50 years. Barbara even has a favorite ship of her own: Endurance, a beautiful 38-foot cruiser.

“It’s named after our marriage,” Hallett tells me. Barbara just laughs. It’s clear they have told this joke many times before. I later learn that the boat is also named after the three-masted ship that Sir Ernest Shackleton sailed to the Antarctic in 1914. Really, it doesn’t matter where the name came from—it just fits. Like Hallett’s love for the sea, sparked by a chance encounter with a 25-cent magazine, and like Handy Boat, a small boat launch that turned into a booming business, these stories endure. Together, all these boats, all these stories, they form a legacy. A greater picture of a life spent on the water, a life well lived.