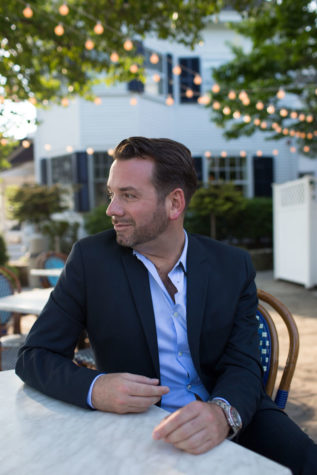 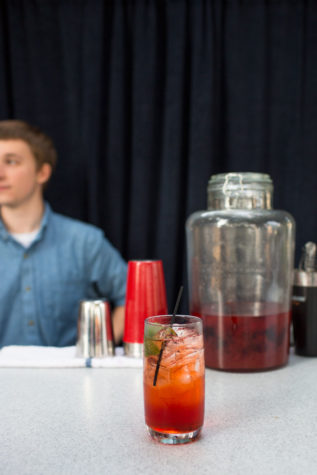 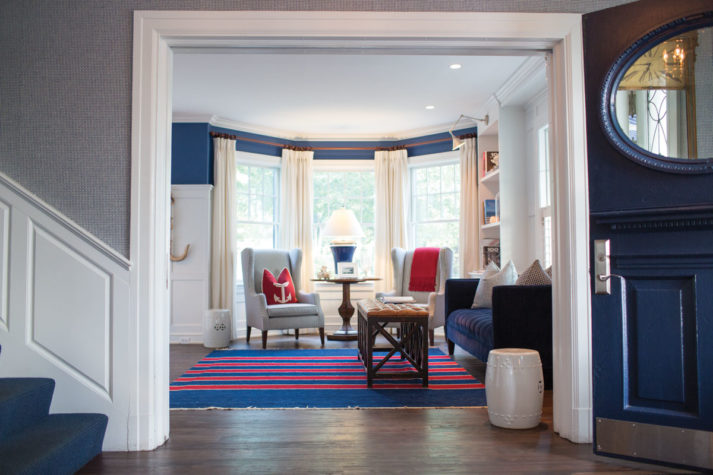 The stylish lobby of the Kennebunkport Inn is decorated in nautical reds and blues. 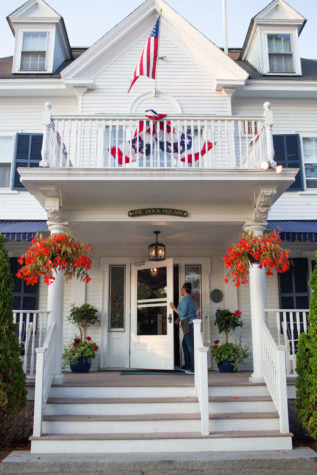 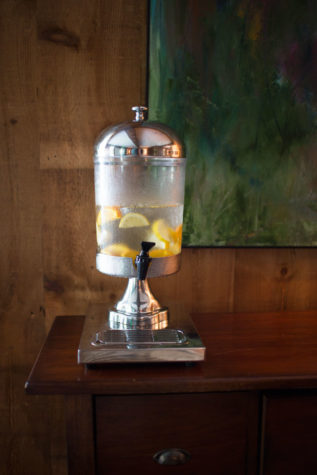 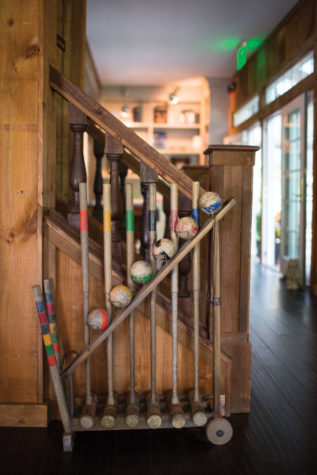 A croquet set adds a playful element to the Club House at the Cape Arundel Inn. 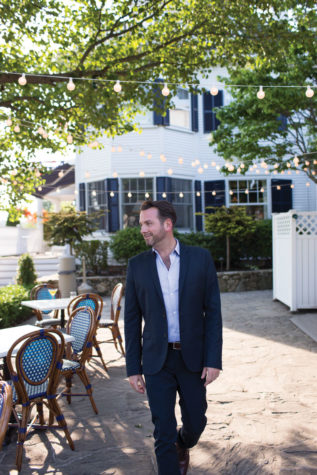 Damien Janowicz is as stylish and sharp as he is warm and generoustraits that endear him to guests at his hotels. 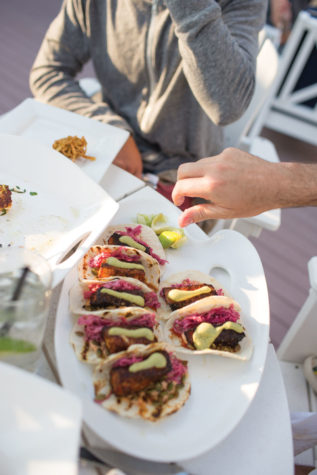 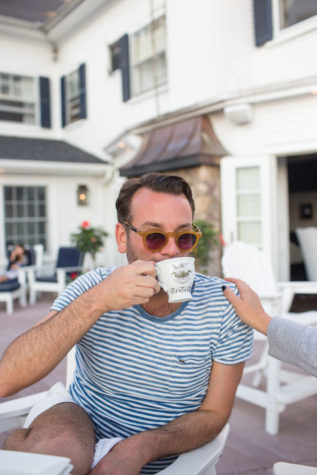 Damien Janowicz enjoys tea on the outdoor patio at the Kennebunkport Inn. 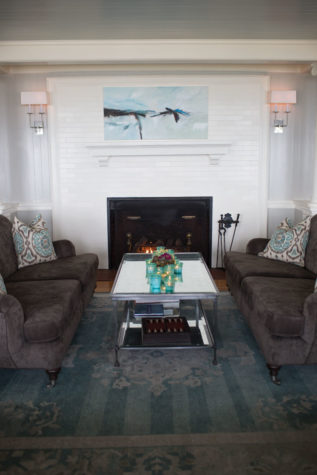 The parlor at the Cape Arundel Inn is a popular spot where guests can relax, enjoy a book by the fireplace or share conversations with other guests. 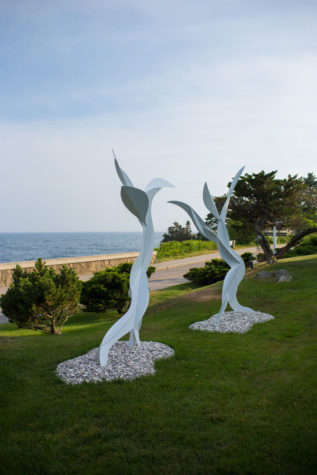 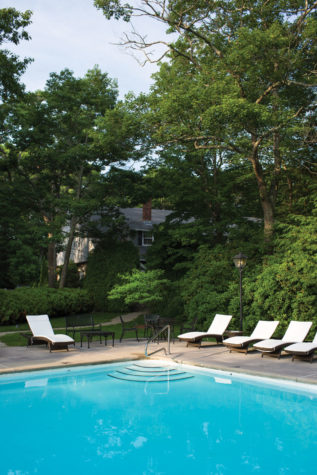 The pool at the Cape Arundel Inn is popular among guests. 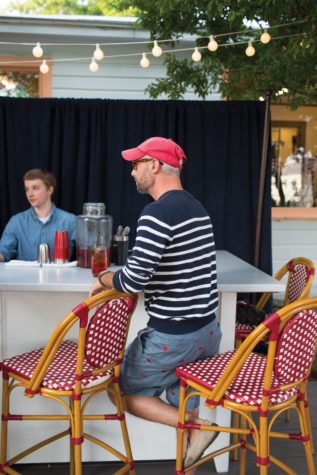 The outdoor patio at the Kennebunkport Inn features a bar that is especially lively during happy hour. 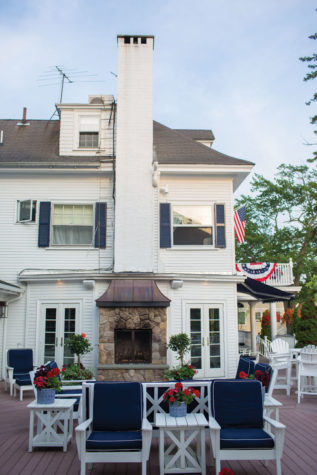 Comfort and style outdoors at the Kennebunkport Inn 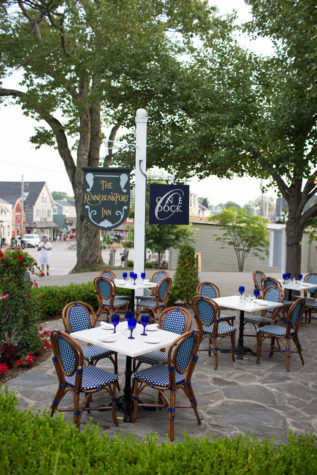 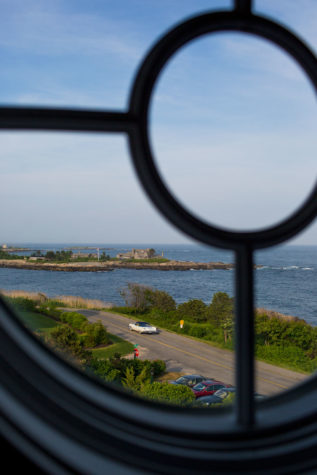 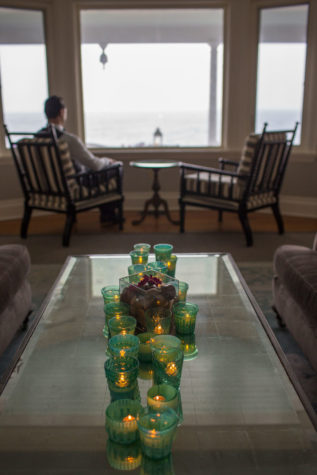 On bringing his natural warmth, sense of humor, and love of hospitality to the Kennebunks

Sitting on the porch of the Cape Arundel Inn, it would be difficult to feel anything but relaxed. The undulating waves of the Atlantic just a few yards away lull you into a trance, and the chatter of nearby guests fades to a comforting hum. Bicyclists and runners stitch their way across your view, waving as they pass. The hours of the day unravel unheeded. And why would you pay any attention to the time? You have absolutely nowhere to be.

This is exactly the experience Damien Janowicz wants you to have. As the general manager of the Cape Arundel Inn and Resort and the Kennebunkport Inn, two of eight properties that comprise the Kennebunkport Resort Collection, it is Janowicz’s personal mission to make sure you are completely, utterly relaxed. He once convinced a couple who had driven nine hours from New York to abandon their dizzying agenda, which included a full day of shopping at L.L. Bean. Instead, they whiled away the weekend, rode bicycles around Kennebunkport, and napped on the beach.

“I read somewhere recently that Americans are working more hours per week than ever before,” says Janowicz. “So for me, the time they have here is precious. This isn’t just a bed for them to sleep in. This is their hard-earned money being spent to get away from their lives for a little while. I want guests to feel so relaxed that they are terribly sad to leave. If I can make you cry because you’re leaving, then I’ve done a really good job.”

Janowicz, 35, exudes an air of polished ease. He eschews a uniform and nametag for a plaid button-down, crisp jeans, and boat shoes. He is sharp, handsome, and stylish—he looks as though he has just walked off the set of a J. Crew photo shoot. He has an office, but rarely works there. Instead, he shuttles between properties, checking in with his staff, ensuring everything is in its right place, and tending to various requests from guests. The hospitality industry calls this “management by walking around,” and it allows Janowicz to be fully involved.

Case in point: last September, Sheikha Mozah Bint Nasser Al-Missned, the wife of the then-emir of Qatar, was going to be at the University of New England to accept the George Bush Award for Excellence in Public Service. Along with a full entourage, she would be staying in town, so the Kennebunkport Resort Collection team reserved and staffed several cottages, as well as all the rooms of the Tides Beach Club. The status of her visit vacillated several times between being cancelled and being on, and it wasn’t until her plane actually landed that it was a sure thing. Then came a rather unusual request: Sheikha Mozah needed two suitcases worth of clothes washed and pressed by the morning. Janowicz, along with Tides Assistant General Manager Eryn Littlefield, rolled up his sleeves and got right to work.

“From 10:45 a.m. until about 8 a.m. the next morning, our office was a laundry center,” says Janowicz, laughing. “We hung clothes-drying lines from one end of the office to the other, and after we washed and dried every article of clothing, we spent all morning ironing. It was like a sweatshop.” Requests like these do not faze Janowicz, whose summer was packed full with festivities like the Kennebunkport Festival and the George H. W. Bush ninetieth birthday bash, which saw the former president parachuting out of a helicopter.

There is no typical day for Janowicz—no clocking in at nine and punching out at five. In fact, the work hours stretch deep into the night, with Janowicz sticking around long after guests have left the dinner table and retreated to their rooms. It can be a juggling act, but what energizes him, and perhaps what sets him apart from others in the industry, is that he does not view what he does as a job.

“It is 100 percent a lifestyle,” says Janowicz. “I consider this my life. People have jobs and careers, and to that extent, I suppose I’ve never really had a job. I am lucky to do what I love doing. This kind of work can kill you if you don’t love it.”

It speaks to both his work ethic and natural talent that nearly everywhere Janowicz has worked—which includes Biba, famed chef Lydia Shire’s now-shuttered Boston restaurant, Beale Street Barbecue in South Portland and Bath, and Petite Jacqueline in Portland—he has climbed up the ranks within a few short years, sometimes within months. In 2011, Janowicz accepted the post of restaurant manager for Earth at Hidden Pond and the Tides Beach Club, which are also part of the Kennebunkport Resort Collection. By 2013, he was the Tides Beach Club’s general manager.

“I worked very hard, and I think that when you set the bar high at the managerial level, it filters down to the rest of your staff,” he says. “I washed dishes, mopped the floor, picked up broken glass. I don’t like to point at things and tell people what to do. It doesn’t work like that. You have to participate as a team, and I think this is one of the reasons we have a cohesive staff. We all work hard to keep this engine running smoothly.”

Debbie Lennon, founding partner and operator of the Kennebunkport Resort Collection, could see how the hotel thrived under Janowicz’s leadership. When the time came to restructure the KRC management team, she put him in charge of the Cape Arundel Inn and the Kennebunkport Inn, knowing that in sink-or-swim situations, Janowicz would always swim.

Lennon attributes Janowicz’s success as a leader to his strong operational focus and keen attention to detail, but she points to his genuine care for others as the true mark of his character. “It is part of his natural personality to treat everyone, regardless of whether or not they are a guest, with the highest level of respect and service, and he oversees both properties as if they were his own home—with a warm, gracious style,” she says.

You could trace Janowicz’s love of hospitality all the way back to the parties his parents frequently hosted at their home in Hampstead, New Hampshire. Those parties, he says, were filled with laughter, warmth, and great food, and they were such a mainstay of his childhood that he assumed every party was just like them. It was not until he attended a friend’s graduation party, a well-meaning but less jovial gathering, that Janowicz understood how special and extraordinary those get-togethers in his home really were.

“At a very young age, I would watch as my parents entertained family and friends,” he says. “The energy was so vibrant and infectious and happy. And I was eager to participate in whatever way I could. I would swap out the used glass ashtrays for fresh ones, or arrange the fruit trays and desserts on the buffet. I guess you could say I started in hospitality at age three.”

Janowicz has a disarming laugh that becomes especially ebullient whenever he shares stories about his family. Beyond influencing his philosophy on hospitality, Janowicz’s family, which includes a younger sister and older brother, also informed his carefree outlook on life. His parents were both educators, affording them the same schedule as their children. The five of them did everything together, he says, and it fostered a bond that is still tight-knit to this day. Every summer was spent in Hills Beach, near Biddeford, where his parents had a home and a few plots of land. There, with no television or telephone, the family spent their days on the beach, basking in a schedule of midday naps and late-night dinners. It was a magical time, and Janowicz says he would cry hysterically when the time came to leave and go back to school.

“What I learned from my parents, and from my friends and family, is the importance of having a sense of humor,” he says. “Being able to laugh, having patience, being empathetic—those are all important qualities, whether you’re dealing with society, employees, or superiors.”

Janowicz engenders a feeling of reassurance that is embodied in every aspect of the hotel: in the smiles that greet you at the front desk and in the care and attention put towards every detail of the rooms. There is a sense of warmth here that is neither affected nor stuffy. It makes you feel as though you are being cared for by a good friend.