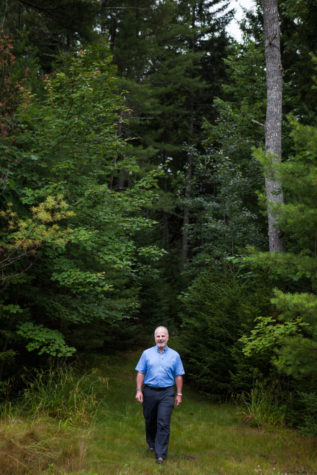 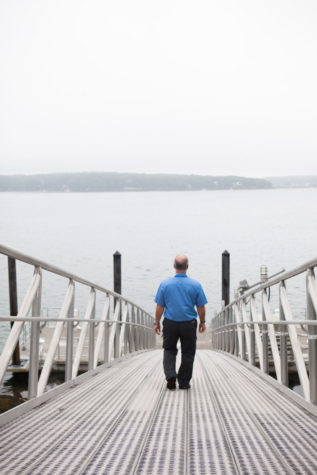 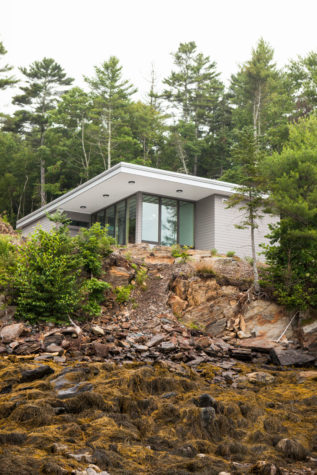 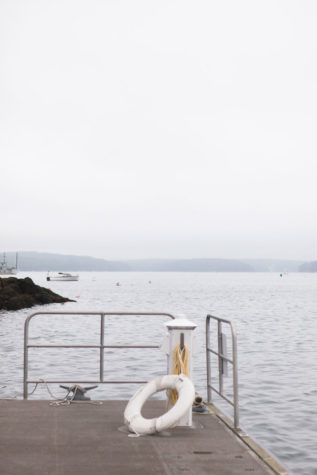 The dock from which Bigelow scientists venture forth to obtain specimens. 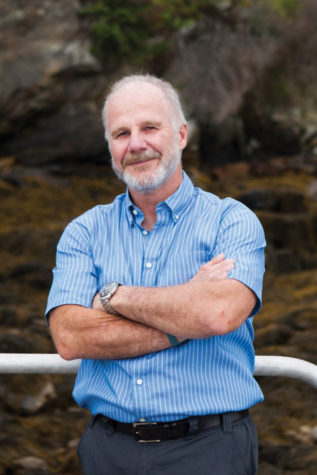 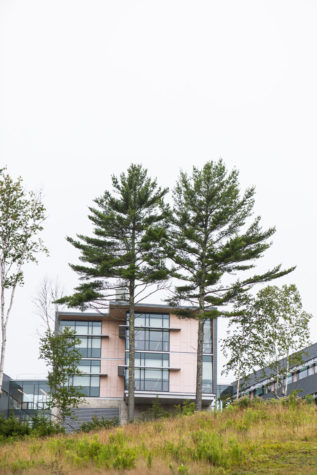 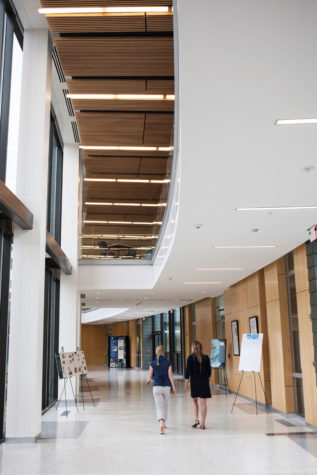 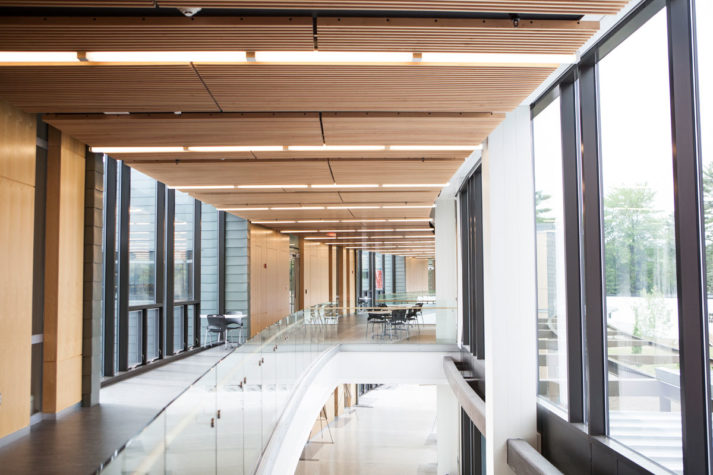 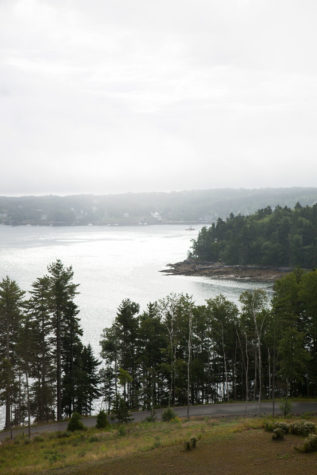 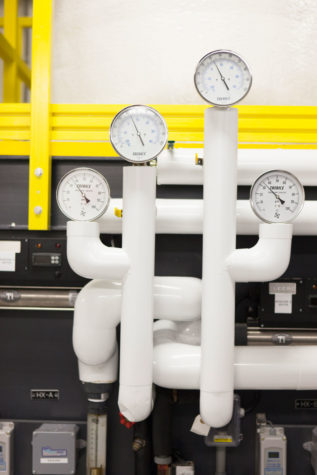 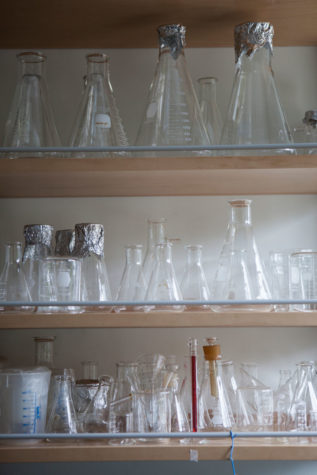 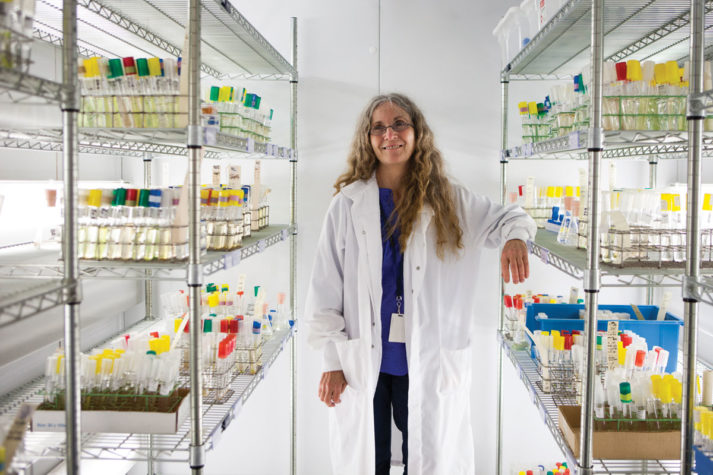 Julie Sexton, head curator for the phytoplankton collection. Bigelow has the nations largest collection of algae 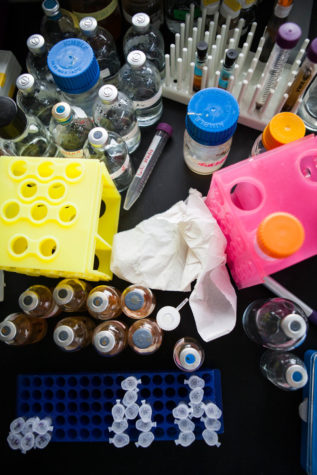 Billions of ocean organisms, including microscopic plants, animals, and viruses can exist in the smallest aliquot of seawater.

I first learned about the Bigelow Laboratory as an undergraduate at Bowdoin College. A biology major, one of my campus jobs was cleaning test tubes for a professor who performed research in the basement of Searles Hall. This pastime had its perks, including access to two of Maine’s most interesting scientists: Drs. Charles and Clarice Yentsch, founders of Bigelow. The Yentsches believed that the Earth’s most diminutive aquatic organisms held critical information about the health of the planet as a whole. Bigelow, the lab they founded in 1974, would become known internationally for translating the ecological messages sent forth by the sea.

The Yentsches came to Bowdoin to present at a conference on flow cytometry. Flow cytometry enables researchers to analyze miniscule particles by suspending them in fluid, which is then passed by a laser-based detection device. In the early 1990s, this technique was more frequently used in the medical field to measure cells, such as blood, cancer, and those that fight infection. Dr. Clarice Yentsch employed cytometry to look at microscopic sea-beings. Her husband took a more macroscopic view, utilizing satellites to monitor the growth of phytoplankton across oceans. Each of these approaches provided data about the impact of climate change, and other variables, upon the invisible creatures dwelling in the waters that cover 70 percent of the planet.

In early 1974, the Yentsches had just returned from an expedition to India, where they had been training people to work on a satellite project, when they took a fateful trip to Maine. They had heard about available acreage on McKown Point in West Boothbay Harbor, recently vacated by a federal fisheries research center and state fisheries lab, and thought that this would be the perfect location for a marine biology lab. The Bigelow Laboratory for Ocean Sciences was established on July 1, 1974.

Charles was the first executive director of Bigelow, a private, nonprofit research facility. The lab was named after Dr. Henry Bryant Bigelow, himself the founding director of the Woods Hole Oceanographic Institution in Massachusetts. Harvard-educated marine biologist Henry Bigelow had spent significant research time in the Gulf of Maine.

Dr. Bigelow is considered the father of modern oceanography. Previously, ocean studies had focused on simple descriptions of what might be found beneath the surface of the sea. Bigelow believed that the ocean should be viewed as a complete ecosystem. In a report to the National Academy of Sciences in 1929, Bigelow wrote, “The inter-relationships in the very complex chain of events in the sea…govern the comparative success or failure of its inhabitants in the struggle for life.”

Although Dr. Bigelow died in 1967, his oceanographic vision would continue in the Maine research institute that bears his name. Celebrating its fortieth anniversary, Bigelow is home to more than 70 senior research scientists, postdoctoral researchers, interns, and staff. Dr. Graham Shimmield, the current executive director of the Bigelow Laboratory, says, “Our scope is global—our scientists work in the oceans from the polar regions to the tropics. Our primary focus is on the smallest things in the ocean: the microbes. Viruses, bacteria, and plankton all influence the way in which the climate system operates.”

Bigelow has access to many of these tiny sea specimens. According to the Bigelow website, their National Center for Marine Algae and Microbiota (NCMA) has “more than 2,800 strains of phytoplankton, bacteria, and viruses from around the world.” The NCMA makes these available to universities, government agencies, and other interested organizations. Meanwhile, Bigelow scientists are studying everything from the gas produced by phytoplankton in the Arctic (a measurement helpful to the study of climate change) to the genetic makeup of microbes that live in the darkest part of the ocean. They’ve assured Dr. Henry Bigelow’s legacy in the Gulf of Maine through use of a six-foot robot submarine that communicates changes in the ecosystem using a satellite feed.

Known for its educational outreach, the Bigelow Lab interacts with students and teachers at all levels: more than 700 students and postdoctoral scientists have worked with Bigelow scientists since 1974. “One of the most lasting ways to transmit the knowledge that scientists acquire in the course of their research is to mentor the next generation of scientists,” says Shimmield. Each year Bigelow offers 16 Maine high school students the opportunity to study ocean sciences for a week, through its Keller BLOOM (Bigelow Laboratory Orders of Magnitude) program. Bigelow also works with the National Science Foundation to offer the Research Experience for Undergraduates (REU) program.

One of last year’s REU scholars comments, “Many people come to Bigelow because of its reputation as a global leader in ocean sciences. For me, the passion and the curiosity of the scientists became much more important than prestige.” This student worked with senior research scientist Dr. David Emerson, whose work focuses on iron-oxidizing bacteria. These bacteria can be found in a diversity of environments, from undersea volcanoes to saltmarshes, and may be useful for removing pollutants from groundwater.

“It was fun to go out into the field with Dr. Emerson and see how his interaction with the land captivated him,” says the REU scholar. “Bigelow scientists are doing something they believe in. They are extremely curious, always exploring new ideas.” The student continues, “Being curious myself, every single day, was more important than having this internship be a simple stepping stone toward graduate school.”

Bigelow scientists readily share their curiosity with the Boothbay community. “Scientists need to explain the work they’re doing,” says Shimmield. “They should explain why it matters, what should happen next, and how it might be used in applied opportunities as well.” During the summer, Bigelow features a popular Cafe Scientifique series, on site and at the Boothbay Opera House. This year’s “Science Conversations on the Maine Coast” offered discussions about coral reefs, oil spills, and energy generation. Bigelow also has two lending libraries open to the general public.

Bigelow has continued to expand both its mission and its physical footprint. Originally housed in several buildings leased from the Department of Marine Resources, decades of growth led to overcrowding. Recognizing the need for more space— and better laboratory air quality than the 1960s and 70s-era systems could offer— the lab purchased a 64-acre forested plot in East Boothbay with $2 million in private donations and a $1.46 million grant from the National Oceanographic and Atmospheric Administration. In 2010, they broke ground on their new facility.

By December 2012, Bigelow had moved its operations to a 62,000-square-foot building on the shores of the Damariscotta River. Designed by Perkins+Will architects Gary Shaw and Patrick Cunningham, the $33 million dollar lab would become the only research facility in Maine to receive the highest LEED (Leadership in Energy and Environmental Design) rating by the U.S. Green Building Council. “What was important to us,” says Shimmield, “is that we built a building that was sustainable, in tune with the environment, and able to do the kind of science we wanted to do. We’re delighted that it’s turned out to meet energy efficiency and design criteria at the highest level.”

With countless accolades and four decades behind it, Bigelow is energized about the future. It continues to attract significant talent to the Maine coast. Dr. Shimmield moved here from Scotland in 2008, as a result of Bigelow’s international search for a new executive director. “The people that come to Bigelow are extremely passionate, dedicated, and enthusiastic,” says Shimmield. “It’s an exciting time to be a marine biologist.” Last year’s REU scholar agrees, “This is more than a separate institution of science. They all seem to have a healthy perspective on the world.”

To Dr. Henry Bryant Bigelow, perspective—and innovation—was everything. He once wrote, “oceanography would die, but for the development of a new point of view.” Bigelow, and its cofounders, remain on the forefront of ocean science. Collectively, Bigelow scientists have published more than 1,374 research papers in the past 40 years. Charles Yentsch, Bigelow’s executive director until 1987, received a Lifetime Achievement Award from the American Society of Limnology and Oceanography in 1999. When he passed away in 2012 at the age of 85, he was described in his obituary as a “beloved maverick,” in part due to the groundbreaking work he had done with satellites. Clarice Yentsch went on to spearhead science education reform efforts in Boston and Washington, D.C. Now living in the Florida Keys, and working as an adjunct professor at Nova Southeastern, her focus is on human dynamics and the importance of creativity and the brain.

Clarice, who returns often to Maine, reflects on what Bigelow has become. “I would say there is a creative tension, because when we started Bigelow we were trying to focus on the sea as a unit—a phrase that came directly from Henry Bigelow—and now the technology has gotten so molecular that things have become extremely specialized.” But she acknowledges that “all of science has gone in that direction.” Ultimately, she is proud of the contributions Bigelow is making to ocean study. “The questions we ask about the ecosystem are the same, even if the way that we get there is different. Bigelow is doing wonderful things.”

Last year I visited the new Bigelow campus, nestled amidst Maine’s tall pines on the banks of the Damariscotta River. I stood in one of the glassed-in conference rooms and listened to the REU student eagerly describe how the study of iron-oxidizing bacteria might relate to human health. He introduced me to scientists who relayed, with equal zeal, how their work was linked to the well-being of the humans I care for in my medical practice. I saw that Bigelow is indeed doing wonderful things.

Before I left, I hugged my son, Campbell, the REU scholar who had showed me around the Bigelow campus. I was gratified to know that he had benefitted from the infectious enthusiasm of the Bigelow scientists, the way I had benefitted from my brief encounter with the Yentsches 20 years before. I came away convinced that Bigelow’s ocean exploration is generating a research and educational ecosystem that will influence Maine and the greater world for decades to come.