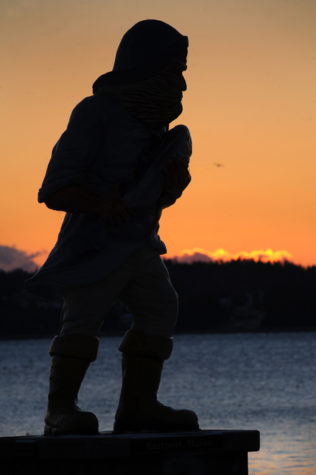 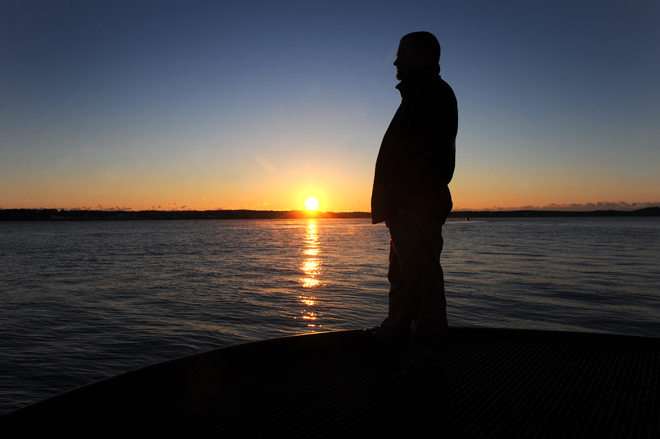 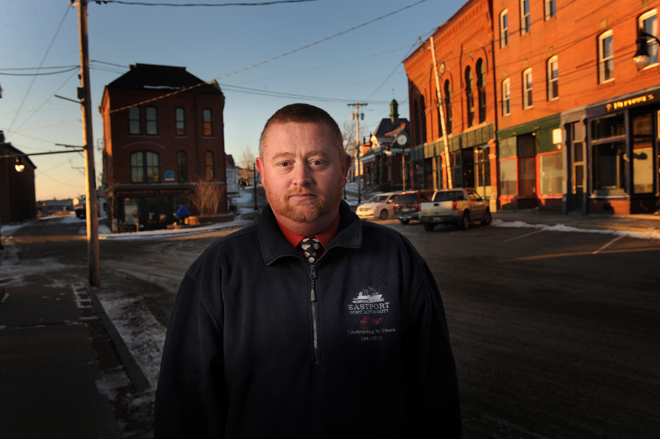 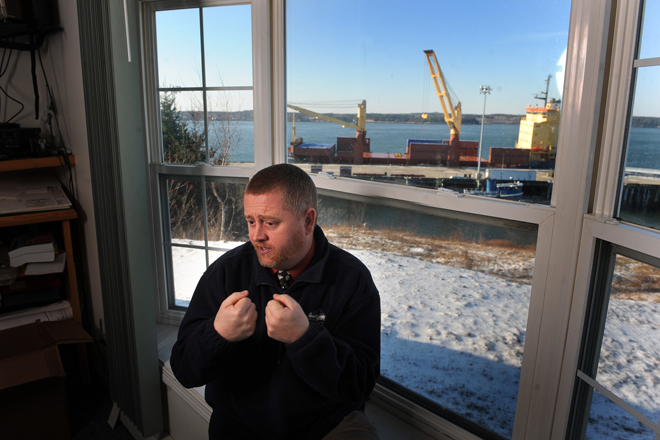 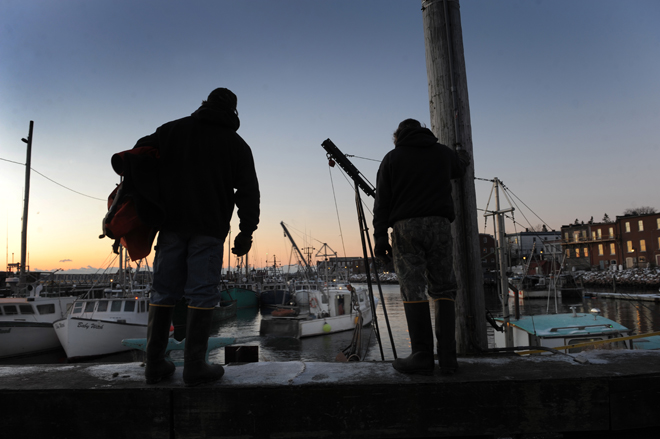 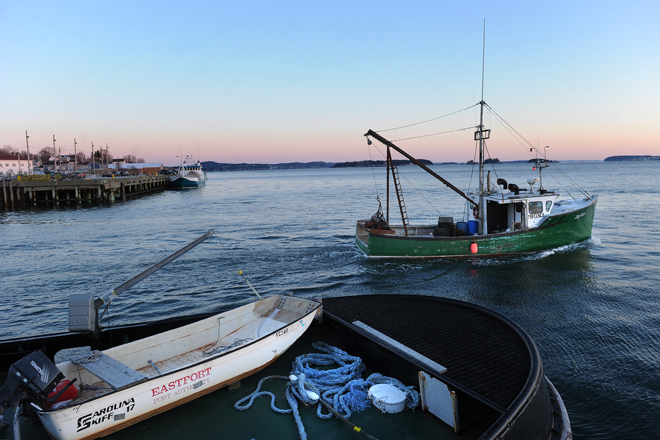 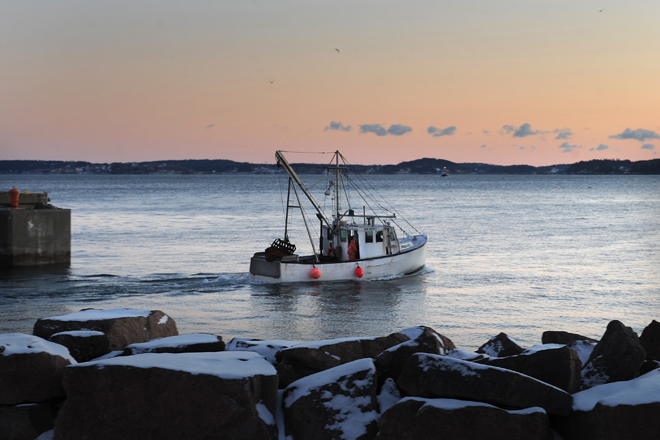 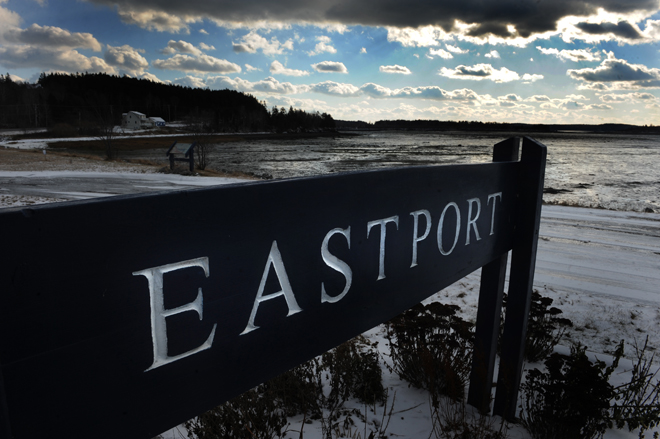 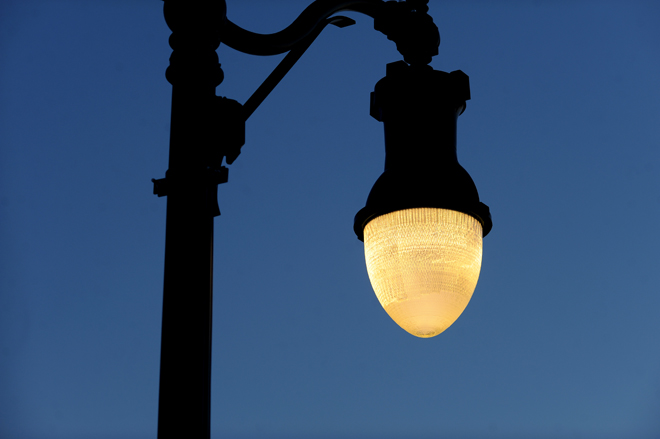 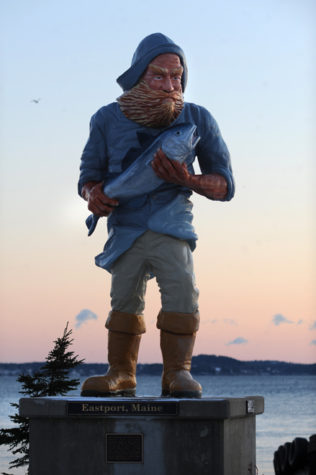 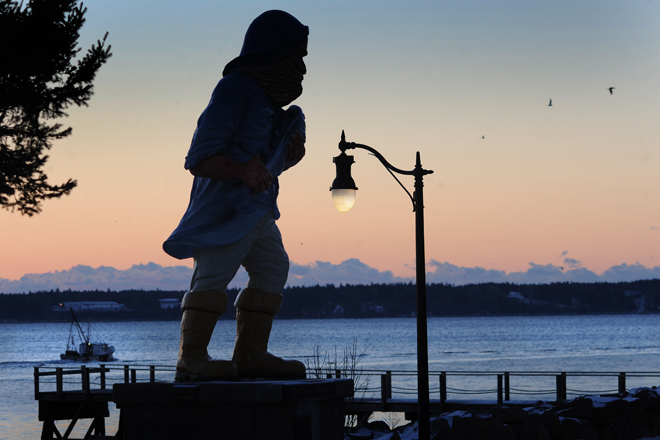 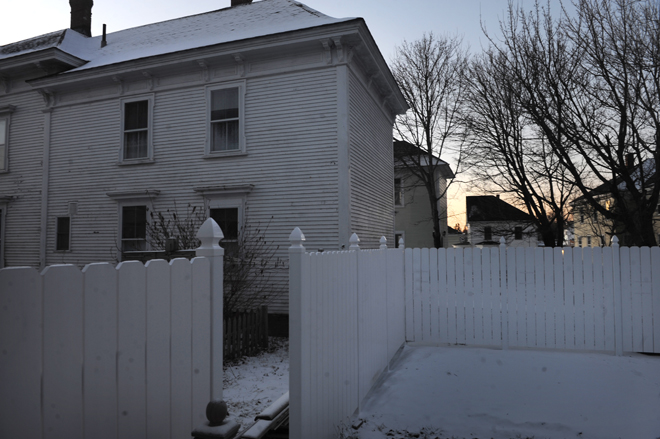 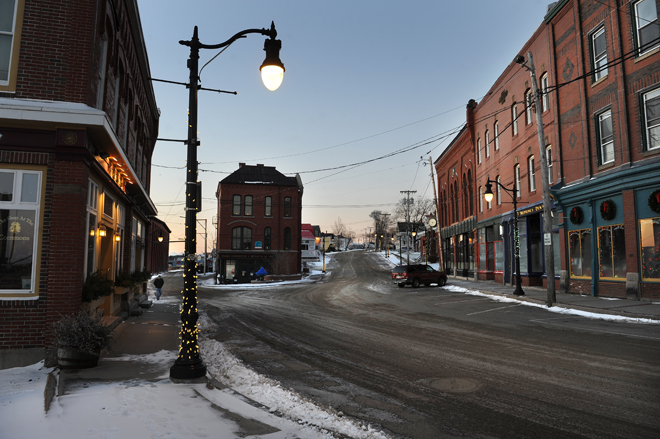 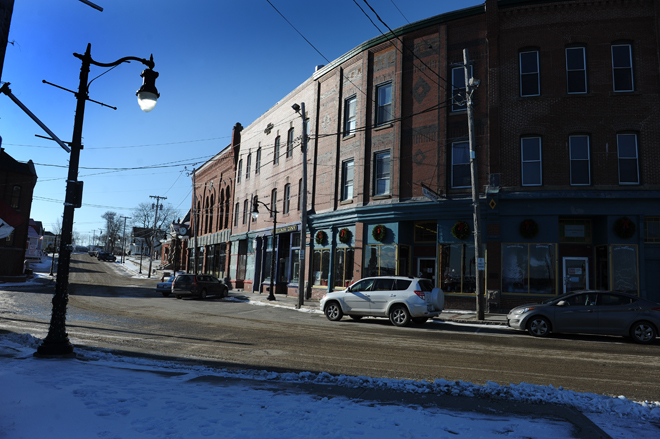 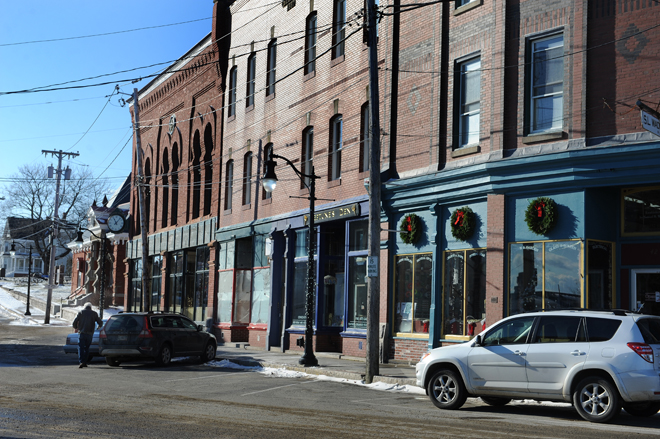 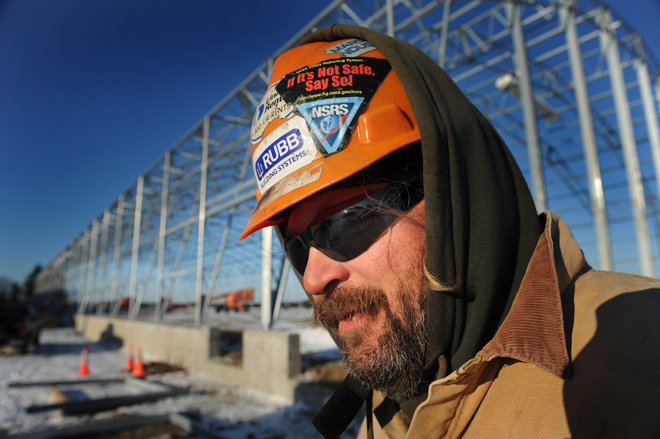 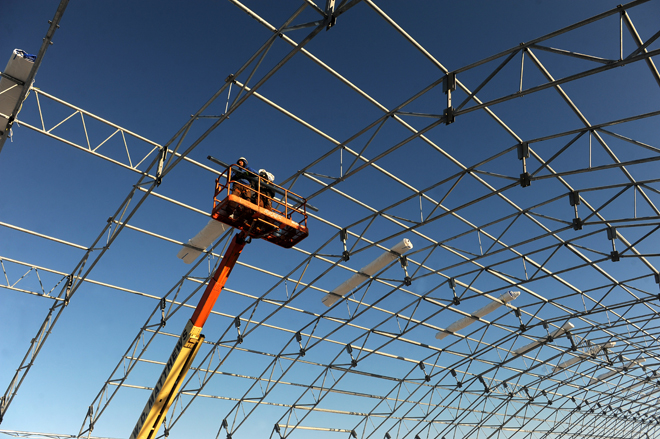 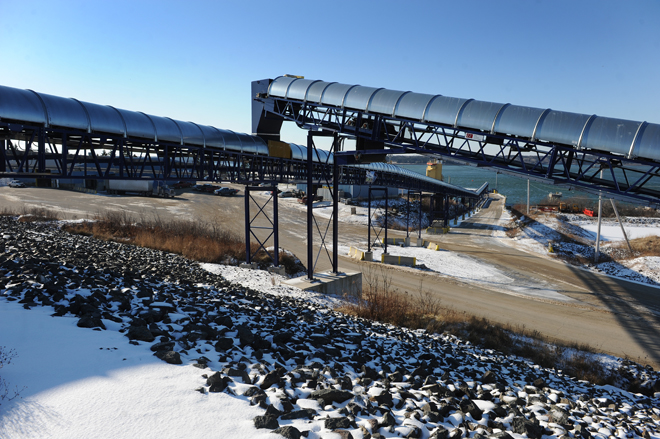 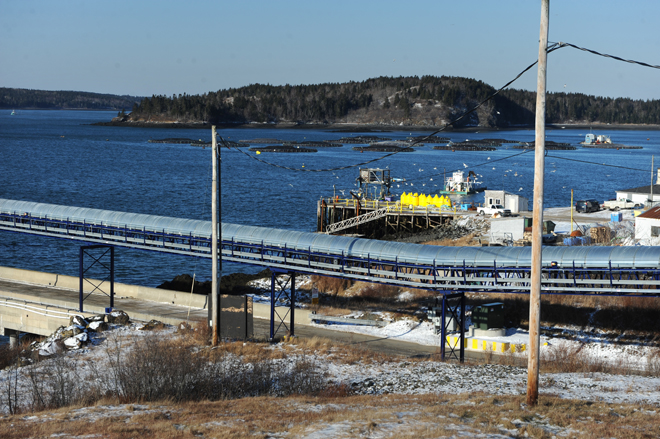 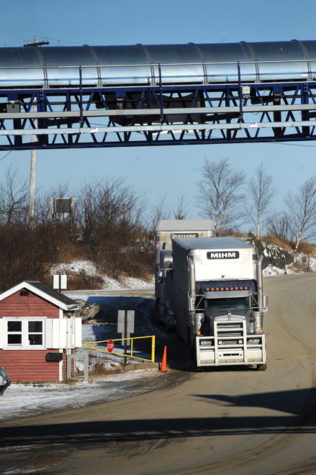 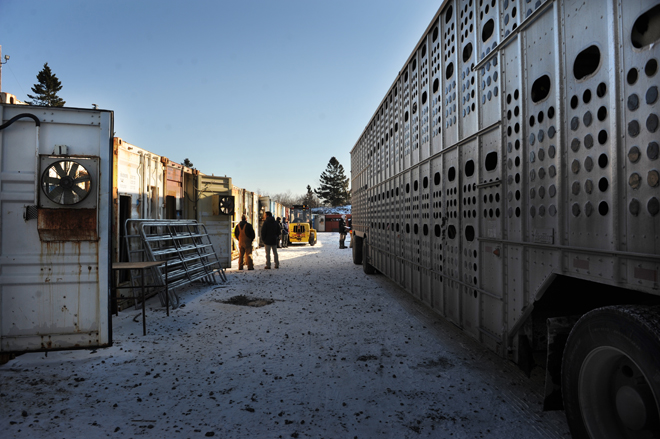 The Middle of Nowhere at the Center of the World

The deep, deep waters of Eastport.

On a cold morning in early December, just past 7 a.m., I waited for Chris Gardner, executive director of Eastport’s Port Authority, on Water Street in downtown Eastport. Beyond a row of half-occupied storefronts in varying states of ruin and re-model—remnants of Eastport’s once-thriving past, expressions of its recent revitalization—the empty channel glittered with hard, winter light. Across the channel, where the St. Croix River drains into Passamaquoddy Bay, the Canadian shores of Campobello and Deer Island floated like purple mirages. Just beyond those islands: the mainland of New Brunswick and Nova Scotia. Just beyond those Canadian provinces, in a straight shot east: the North Atlantic, maritime gateway to the rest of the world.

That morning, I’d left the midcoast around 3 a.m., driven north on I-95 into Bangor, then headed east on Route 9—known locally as the Airline—on a one-way trip of roughly 230 miles. Passing through towns like East Eddington, Clifton Corners, Archers Corners, Amherst, Aurora—all communities with populations of less than one thousand—the sun rose pink over vast, tundra-like fields to the north and south. Just past the Washington County line, I pulled over and got out of my truck just to take in the dawning beauty of all that space. By then I’d been driving for over three hours, and had I driven south on I-95 instead of north and east, I would probably be stuck in a traffic jam near Providence, Rhode Island, halfway to New York City. It is no brilliant revelation to say that Maine is a very big state (its total area is roughly equal to that of the five other New England states combined); the revelation, I suppose, is how attached most of us have become to mapping this vastness in a very specific, and quite limited way.

Gardner showed up on time. I got in the passenger seat of his SUV. The plan was to spend the morning poking around the shipping terminal at the port of Eastport to witness the construction of a new 100-foot- by-300-foot warehouse that Gardner intends to use as a storage facility for potential overseas shipping cargo, creating more opportunity for increased shipping traffic and business. You can’t take on new ships if you don’t have a place to store what they carry, Gardner told me when I spoke to him by phone earlier that fall. His was an “if you build it, they will come” vision of economic progress that was hard not to admire, and even believe in. Someone had to make a first move to bring more business to Washington County—a county that, among Maine’s sixteen, has a reputation for being the poorest and least employed—so, Gardner decided, why not begin where America’s sun rises.

A native of this region, a former police officer and county commissioner, and a father of two, Gardner has devoted the last seven of his 38 years to reviving this port. And we had not driven far beyond Eastport’s downtown before he began articulating his vision for this region as if he were standing before the entire state.

“Do me a favor,” Gardner said, reciting lines from a recent commencement address he gave to the two-dozen graduating seniors of Shead High School, which Gardner graduated from in 1992. “All of us here, tell us we’re all liars! Every one of us: liars.” Maine, Gardner told those students, is great at inventing “neat slogans” for everyone who doesn’t live here: Open for business! Vacationland! The Way Life Should Be! But behind that positivity, Gardner said, the message that too often was projected to the young of this community—“our greatest responsibility, our greatest hope”— was what Gardner referred to as one of “tactical retreat:” to leave Eastport, to leave Washington County, to leave Maine, to find better opportunities elsewhere. The new message Gardner wanted to offer: one of hard-won, stubborn optimism. “Wherever you choose to be,” Gardner said, “that is where tomorrow begins.”

And then we crested a hill, and Gardner stopped talking, put his car into park, and threw his hands in the air. “I can’t believe it,” he said. “I can’t believe it.” He turned to me. “We’ve got cows today. We’ve got cows!” The cows. I’d read all about the cows. Although you could not see them, there were some 350 Holsteins packed inside nine 40-foot storage containers, which had made the trip to Maine from a farm in Ohio upon tractor-trailer trucks. Waiting on the port access road, steaming in the cool of the morning, the trucks themselves seemed their own species of grazing, bovine beings, headed straight for the pasture of blue that sparkled before them.

When Gardner interviewed for his position at the port back in 2007, he asked the board of directors what they wanted him to do. “Move the needle,” he was told. Part of moving the needle meant establishing a system of logistical infrastructures to move biomass pulp from mills in Maine to points as far eastward as China and Indonesia. But it has been this business of moving of cows through Eastport that has earned Gardner the head-scratching, baffled admiration of the public. What makes these cows different: before arriving in Maine, they’ve all been artificially inseminated by a multinational firm called Sexing Technologies, which sells the cows to foreign buyers with the promise that as their product makes their 30-day transatlantic voyage east, every one of them will be pregnant.

Gardner isn’t all that interested in why there is such high demand for pregnant American cows overseas (the demand might be fueled by a European beef market looking for loopholes around the bureaucratic legacy of the mad-cow epidemic of the early 2000s). To Gardner, the imminent concern is his community, and how Eastport’s port can play a central part in moving goods—pregnant or not—across oceans. In a sense, the cows have become an agricultural charismatic megafauna, an animal symbol of how big problems can be solved with the most unpredictable, outside-the-box solutions.

“Pregnant! Of course they were pregnant!” Gardner recalled, as we passed the parade of tractor trailers. “I had no idea how we were going to do it, but you don’t lead with no. You lead with yes. There are a million reasons why we can’t do something. But you got to ask yourself: are you gonna do something or not? You build your wings on the way down.”

In the first year of the cow project, the port moved 470 cows overseas. Since then, they’ve shipped some 40,000 of them. Gardner is careful to maintain, though, that it wasn’t just blind hope or a leap of dumb faith that has made this project so successful. “Location, location, location,” he told me while looking out a large window in his office, which offers a view across the port’s main terminal, as well as a view of the $9-million-dollar conveyer belt system that Gardner has recently invested in. The system still shimmers with the shine of newness: as of yet, Gardner hasn’t had the demand or opportunities to put the system to use. The new storage facility, this conveyer belt: leading with yes.

But returning to “location:” this notion of how, exactly, one imagines Easport’s “location” goes back to the map of Maine I, and many of us, keep in our stubborn, south-centric heads. When most of us talk about Washington County, we tend to refer to it as “way Down East” or “far away” or “in the middle of nowhere.” When most of us picture a town like Eastport, we think of it as the last stop on the edge of the American world.

But Gardner is the first to point out how detrimental—and ill-conceived—that language can be. “We have a national asset that Iowa doesn’t,” Gardner explained. “We’re closer to Europe [via shipping routes] than New York City by four full days. The cheapest way of moving cargo? The ocean. The second cheapest? Rail. That’s the real money in all of this,” Gardner said. “These boats, they rule the world. And we got way too many natural resources right here not to be successful.” But the crown jewel of this port: the deep, deep water. The channel that runs along the port’s terminal boasts more depth—40 feet at low tide, 80 at high—than any other channel in the continental United States (Valdez, Alaska, is the only port with deeper water). This makes Eastport a profoundly accessible terminal for the massive ships that traverse our planet, loaded with the stuff of the world. For transatlantic ships collecting cargo along America’s eastern seaboard, that also means that Eastport is the last stop. For certain forms of time-sensitive cargo— pregnant cows, for instance—there’s no better place to start.

Later that morning, I met up with several of the welders and longshoremen in charge of moving the cows from the larger containers in which they’d been shipped on land to the smaller containers where, 14 at a time, they would make the transatlantic voyage. Of all the men who took part in the work, the two I found most interesting were the ones everyone referred to as the “cowboys:” 51-year-old “Pepe” Vega, of Cuban heritage and a resident of Miami, and 28-year-old Ever Peralta, a farmer from Nicaragua. It was these men who had just returned from a previous 30-day voyage across the Atlantic, during which they fed and tended to the pregnant cows, and even delivered calves that were born at sea. After a single day in Turkey recovering from the trip, Peralta and Vega boarded a flight back to Bangor, arriving about 3 a.m. That morning, they drove the two hours to Eastport, and now, in nearly subzero temperatures, they’re herding the next shipment in preparation for another voyage.

Approaching the noon hour, back on Water Street, I sat down at the counter of the WaCo Diner, and spoke to a waitress there who told me that none of the people she went to high school with are still in the area, and that there’s not much to do here. Her husband, though, has good work at the port, and her father-in-law does, too. As for herself, she’s proud to have her job at the diner, serving people from her community.

Among her customers that day were Ever Peralta and Pepe Vega. They looked tired, but their spirits were high. For the next two days, they would rest up in town before returning to the ships, to the cows, for another voyage across the Atlantic.

For now, they were happy to be in Eastport. “It’s like being at home,” Peralta told me, in Spanish. “The people here are the nicest people I’ve met in the USA.” Vega told me that he liked this work. In his former life in Cuba, he was a “doctor pediatrico,” but had come to America for a better future.

Over coffee, it dawned on me that Vega and Peralta were global cowboys of a different frontier: this one began in Eastport, and, rather than offering a westward destiny across the plains, sent these men overseas, back in the direction where so many of our Maine ancestors had come from. And in their description of this global journey, I could feel in my own mind the old map blurring, drifting, then changing shape: to these men, to Gardner, to the people of Washington County, Eastport is not a town on the edge of the world. It is right at the center of it.