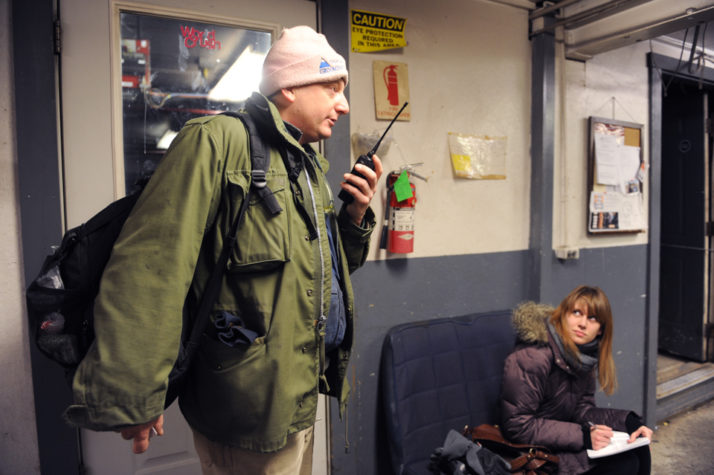 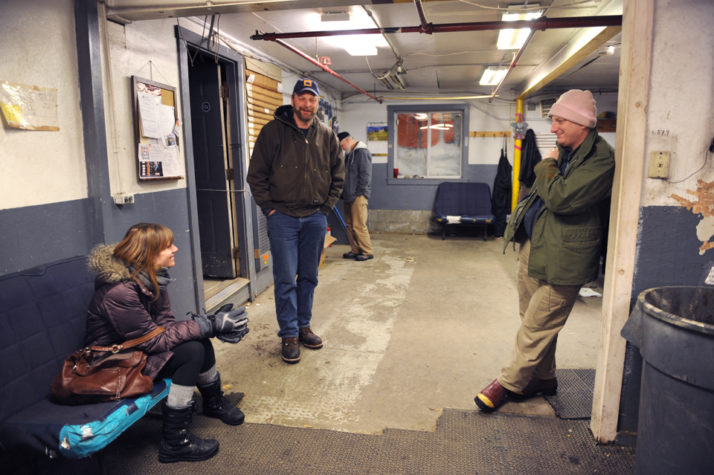 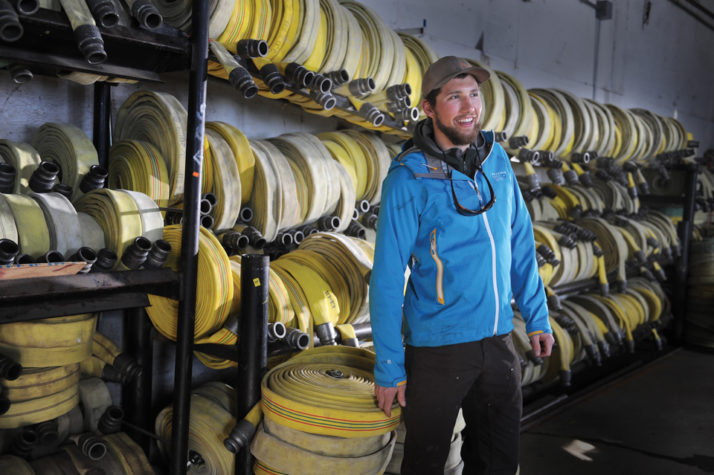 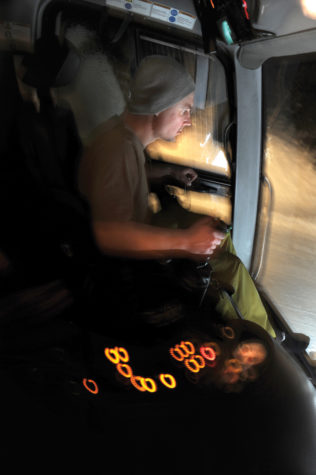 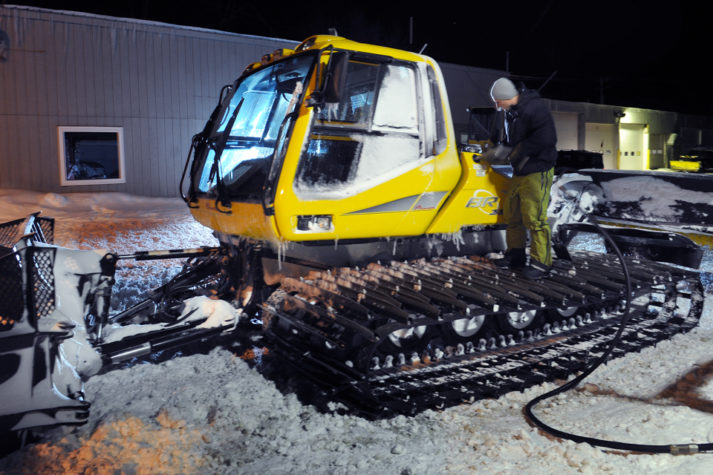 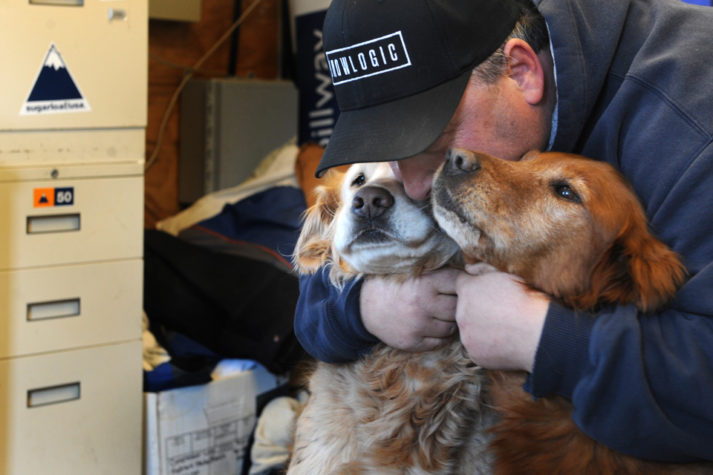 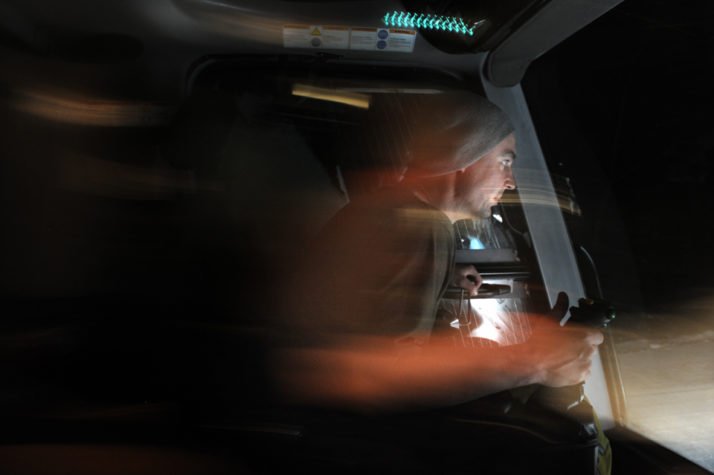 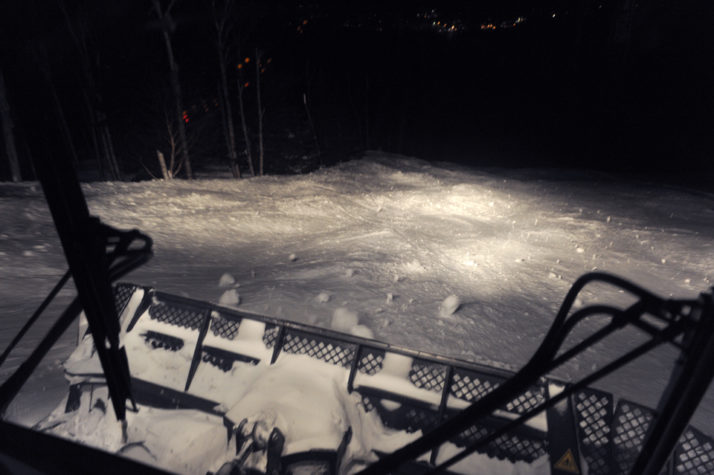 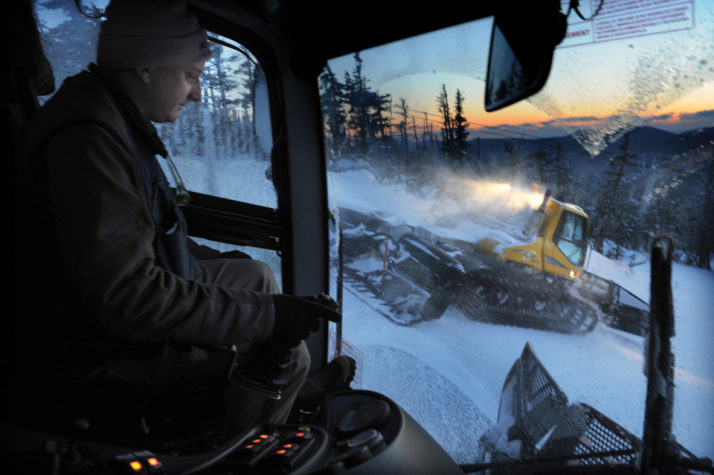 John Markham steers through the dark hours of the night. 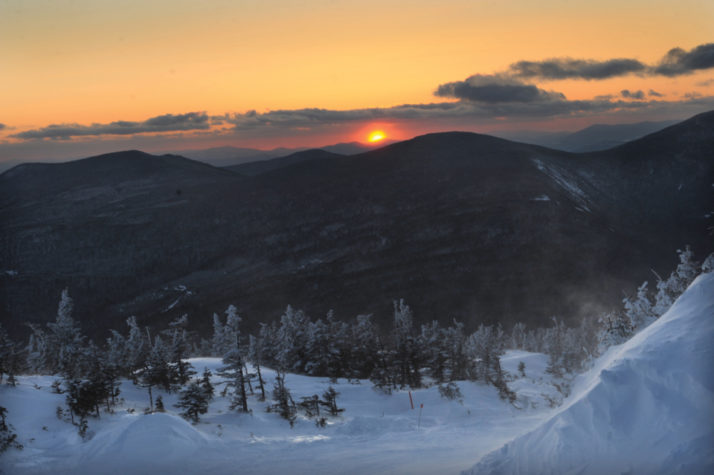 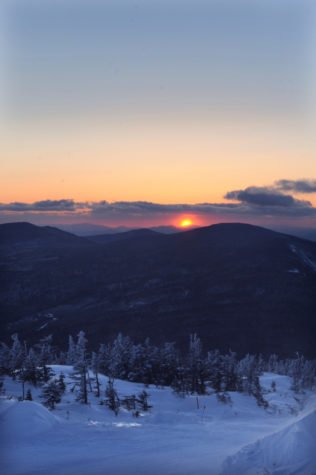 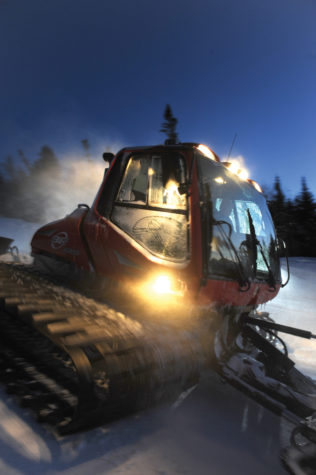 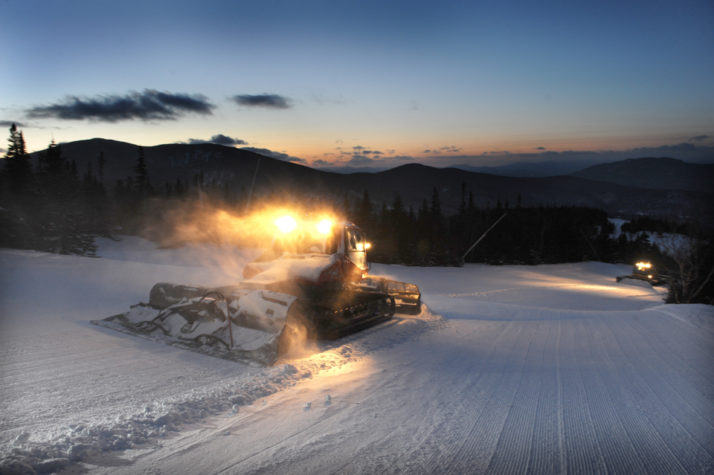 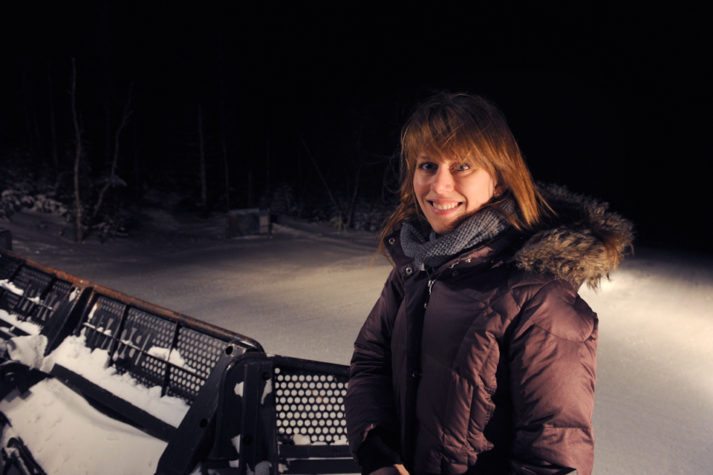 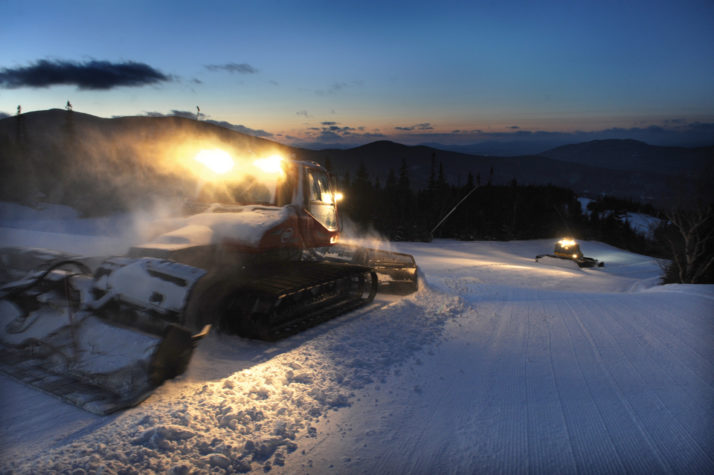 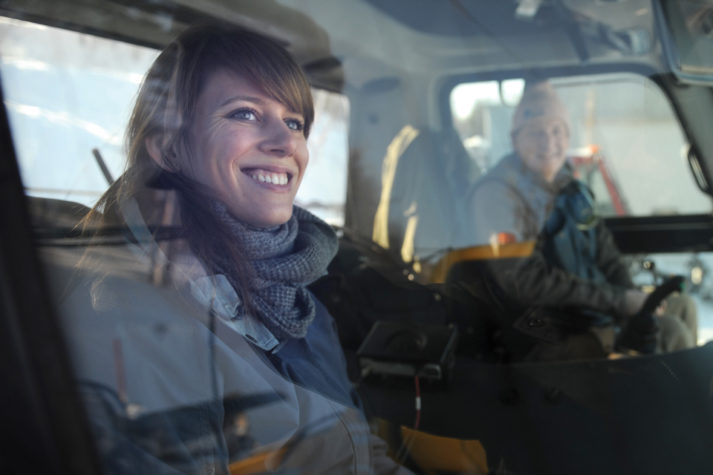 It’s midnight on the mountain, and the wind has wormed its way into my heavy parka and down my spine. Lights from large machines shine like beacons, eerily illuminating distant ski trails, and snow ripples through the air in ghostly waves. It’s seven degrees below zero, and all is quiet on the slopes of Sugarloaf.

Or so it seems. Inside the maintenance garage, lockers line the walls and various pieces of outdoor gear are strewn about haphazardly. Workers in snow pants and sweaters straddle the benches, pulling on mittens and gloves, talking loosely about the trail conditions. Their conversation is peppered with words sprung from metaphor: mashed- potatoes, corduroy, silk, death cookies, powder. Each describes a different texture of snow, from the covetable to the disastrous. (Eskimos may not have 100 words for snow, but these guys just might.)

For some, this is the end of their grooming shift. This group of workers is loud and boisterous—after spending the past six hours in solitude, the crew seems ready to use their “outside” voices. Others have just arrived. While most skiers and snowboarders are sleeping in their beds, these workers are wide awake, ready to climb into their snowcats and begin the long process of preparing the slopes.

There are two types of night workers who maintain the trails. First, you have the snowmakers, who travel in pairs around the mountain, turning high-powered snow guns on and off and monitoring the quality and depth of snow. The second group is the groomers. Alone, each man operates his snowcat, driving the 11,000-pound piece of equipment up and down trails, smoothing snow and moving drifts. Albeit not the most cushy jobs on the mountain, these positions are essential, for snow is to a ski resort what flour is to a bakery. It is the ephemeral white backbone of the entire business.

It also costs quite a lot of money. When Mother Nature plays nice and blankets the Carrabassett Valley with powder, everyone is happy. But as anyone who has lived through a Maine winter knows, Mother Nature is nothing if not capricious (and occasionally cruel). Since 2010, Sugarloaf has invested over $2 million in snowmaking equipment and technology. This figure includes 550 new low-energy HKD SV10 Impulse snow guns. These high-tech machines are extremely efficient when it comes to merging compressed air with water particles; that magic cocktail is sprayed from the snowmaking equipment with great force and can be flung over 100 feet from its source.

“It doesn’t sound like it, but the hardest part of the job is to maintain a snow gun,” explains Dan Bradford, who has been working as a snowmaker at Sugarloaf for the past five winters. “A lot can go wrong— bad wind, bad temperatures. Guns and hoses get buried. The winds can change, and you come back in an hour and there is four feet of snow covering 50 feet of hose. It takes forever to dig out.” If anyone can enjoy this job, it’s Bradford. His lifeis arranged around one simple principle: “Outside is where I feel most comfortable.”

This, it turns out, is a common theme among Sugarloaf’s night workers. Bradford, currently a full-time student at the University of Maine, Orono, spends his summers rock climbing and his winters on the slopes, either in Maine or in Jackson Hole, Wyoming. He has also spent quite a bit of time in Alaska, working and studying in Denali National Park. Groomer (and former snowmaker) John Markham competes annually in the Sugarloaf Banked Slalom competition, snowmobiles the backcountry of Carrabassett Valley, and spends his free time designing and building wooden snowboards for the Maine-based company Lucid Ski. Dave Perry, a groomer who has been working for Sugarloaf for 12 years, sails professionally out of Bar Harbor in the summer. Before he came to the resort, Perry spent his winters in New Zealand, training for the America’s Cup, which he describes as “the Formula One of sailing.” Maine, he says, is the perfect place for him. For lovers of the outdoors, it’s the best of all worlds, with thousands of miles of coast for sailing, mountains for skiing, plenty of natural snow, and miles of uninhabited forests. Some people look at Maine on a map and see what isn’t here, focusing on the lack, the negative space, the highways that have yet to be built, the land that has yet to be developed (or has fallen into disrepair). People like Perry and Bradford and Markham and all the other groomers and snowmakers I spoke with, look at the same map and see hundreds—thousands— of adventures and an impossible wealth of beauty.

Sugarloaf epitomizes this mindset. Rugged and tough, the north-facing mountain is cold and formidable. At night, it feels even more remote. “You have to enjoy a certain amount of—I shouldn’t call it torture— but you have to enjoy the struggle,” says Bradford when I ask him why he has chosen such a physically demanding lifestyle. “It feels good when you have the guns set the way you want, when everything is going so smoothly, it feels right.”

Even though he takes pleasure in his work, Bradford admits that sometimes “torture” is the right word. He recalls one night, early in the winter of 2014, when the temperature was 27 degrees below zero, and the wind was roaring at a steady 50 miles per hour. “You don’t want to have any exposed skin, especially if you’re walking into the wind,” he cautions. “You have skin in the game— sometimes literally,” adds Markham. Sarcastic and funny, the groomer (a former Sugarloaf snowmaker) sits forward in his seat as he navigates his “winch cat” around the mountain. “When I was making snow, I got the tip of my nose frostbitten one night. I learned fast. Always cover up.”

Frostbite will always be a concern for snowmakers, but a blackened extremity is nothing compared to what would happen if one of the snow guns were tomalfunction. The hoses that pump water to the snow guns are always charged with around 800 pounds of water pressure. On the main line, there are hydrants that hold up to 1,400 pounds. An article titled “Snowmaking is the Most Dangerous Part of Skiing” published in February 2013 on Salon.com details the many ways in which a snowmaker could be hurt, and the list is impressive and a little terrifying. Branches weighed down by ice and snow can fall through the dark, pinning the hapless snowmaker to the ground. A hose could explode—or perhaps wasn’t attached quite right—launching metal into the air (or even a whole snowmobile). “There are many ways to die,” concludes author Jennifer Kabat. It’s no wonder these employees work in pairs.

Fortunately, these types of accidents are few and far between. The real, everyday peril of the job has more to do with personal satisfaction than physical risk. To be a good snowmaker or a good groomer, you need to be able to entertain yourself without screens or games or the banal distraction of office water cooler talk. You need to enjoy the cold, to relish in the small victories of getting a trail just right or producing perfect powder. “We like to hire people who ski or board,” says Perry, who manages Sugarloaf’s groomers. “A lot of our guys get promoted up from snowmaking. Snow science is a big part of what we do. The moisture content, the texture and density of the snow, all that changes how you groom.” This, in turn, changes how the skiers experience the slope. While Sugarloaf’s night workers aren’t able to ski after dark, at least one admits to staying up all night and grabbing first chair.

But it doesn’t feel like it. Perhaps it’s the game-like aspect of the job. Perry, who calls his snowcat “1,400 pounds of fun,” compares grooming to a video game, one that requires technique and precision. “It’s a very nimble, precise machine,” he says, before launching into a description of the robotic blades that push snow from here to there. It turns out that Perry isn’t the only one to have this thought; Libredia, a digital gaming publisher, produces a Snowcat Simulator game for PCs that rewards users for “properly preparing” slopes at a “huge ski resort.” (“In such a profession, the fear of steep slopes is out of place,” the game makers caution.)

But I suspect my feeling of disconnect has to do with something greater. As the mighty machine carves the snow, pushing hundreds of pounds of frozen water from here to there, I find my eyes keep drifting towards the sky. “It’s really special up here on a full moon night,” remarks Michael Anthony. My last interview of the night, Anthony is the most experienced groomer of the bunch. Having worked at Sunday River for 13 years, and Sugarloaf for four, he speaks of the mountain with a deep, solemn respect. “Some nights it’s bitter cold, not fit for man or beast to be out there,” he says. “But you’re up here alone. Just you and yourself to contend with.”

Just you, yourself, and the mountain. In truth, it’s not a game, nor is it really a job. This is a lifestyle, one that worships the Great Outdoors and all its fearsome splendor. Anthony does not strike me as a man of many words, which is perhaps why I hang on every one. He tells me about silk, that “dry, sweet snow,” with the reverence one might use to describe a holy ritual: “You can see that silk powder glistening in the sunrise at the end of your shift.”

Every night, Anthony makes a point of taking his machine up to the summit. “On a clear day, you can see all the way to Sunday River,” he says, as we look out over the mountain. “You can see for miles and miles from here. That’s God’s honest truth. It took me awhile to believe it, but I’ve seen it now.” In the dark of the graveyard shift, my vision is blurry and strained. I can barely discern the glittering lights of the hotel, much less Sunday River. Then, I get out of the snowcat and look up. There are stars, hundreds of them, brighter than all the houses below, each point of light defying the vast emptiness, like towns scattered across a map.