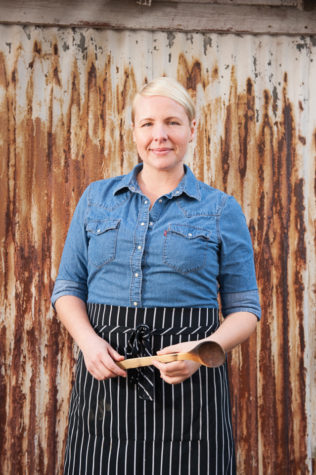 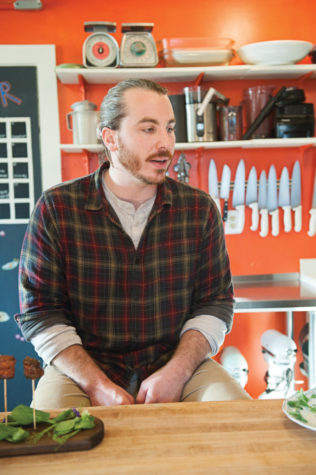 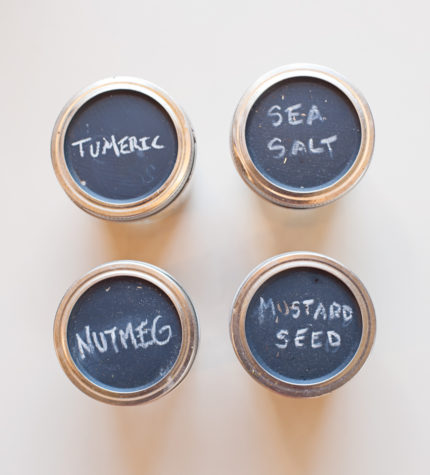 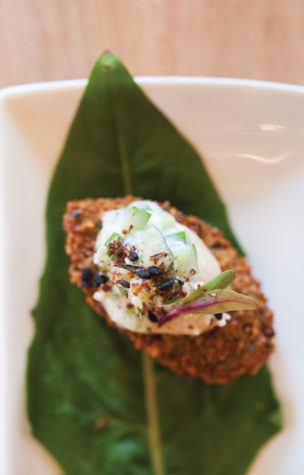 Falafel with tahini and cucumber yogurt 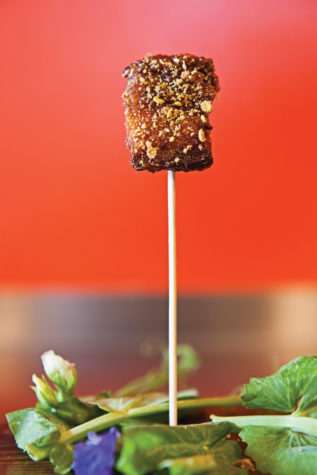 Pork belly lollipops are like French toast from heaven. 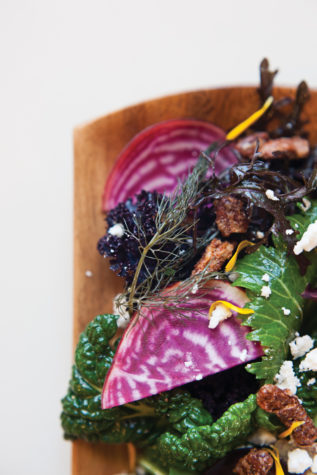 Remember, you eat with your eyes first. 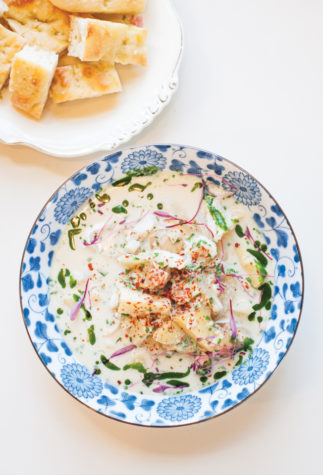 Taking the art of the feast to the next level

I don’t think that I’m alone when I say that the quality of the feast can truly define a wedding as a whole. I am referring to not only how the food actually tastes but also how it is served, as the human mind is conditioned to recall the visual of the plate before all else. For most wedding celebrations, designing the meal is especially daunting given the wide spectrum of guests—from the food-savvy to the more conservative—so it takes a certain measure of skill, combined with flair, to beguile each and every reveler that comes to the table.

When I arrived at the home kitchen of Trillium Caterers in Belfast, this “whole package” idea was beautifully illustrated with the very first piece of food I put in my mouth. Abigale Avey, who runs the company with her fiancé, Michael Casby, hands me what at first glance appears to be a lollipop. As it turns out, the pops are squares of pork belly that have been braised in apple cider and milk before being deep-fried, glazed with maple syrup, and crusted with pistachio. The complete joy I experienced from this one bite of food is difficult to properly express with words. The meat was tender, fatty, and salty on the inside, while the outside was crunchy and sweet. It reminded me, in a way, of the best French toast I have ever tasted. Avey shows me the presentation, which involves a long wooden board that would run the length of the table without inhibiting cross-table conversation, studded all the way down with the pork lollipops, garnished with a scattering of greens for color. This, to me, is the kind of thing that makes a meal memorable.

Both Avey and Casby have extensive experience in the restaurant business—in the back and front of the house, respectively. They met while working at a restaurant in Brooklyn called Enoteca and traveled to Maine to visit friends on Islesboro. They stumbled on Belfast and quickly fell in love with it, citing a meal at Chase’s Daily on Main Street as what finally prompted them to stick around for a while. Avey, through her friends’ connections, landed a job as kitchen manager for Trillium Caterers, while Casby initially focused on massage therapy. Within a year, they bought Trillium, which has been around since 1978, and began to get truly inspired by the art of banquet service.

Maine allowed not only for a break from the pace of the city, but also the benefits, especially in Belfast, of being surrounded by farms to procure fresh produce. Avey tells me, “At certain points in the summer, I will purchase seven different kinds of tomatoes, each varying in brightness, acidity, shape, and color, one from each vendor. I place a very high priority on aesthetic, so just having access to this kind of variety is really special.”

She presents to me a salad of greens with paper-thin Chioggia beets, salty feta, and candied pecans. The garnish is the very last calendula flower of the season, procured from the garden right outside. The first thing I notice about the salad, outside of its stunning beauty, is the intensity of the flavor in the greens themselves, which came from Chase’s Daily. Each element on the plate is given the opportunity to shine and contribute to what is, in essence, such a simple dish, bringing me back to my point about what makes food memorable. Dishes like this lend themselves to being served family-style, which allows for both the ease of beautiful presentation and the all-important interactions amongst guests.

Casby, who primarily handles the service and bar elements of each event, mixes me a cocktail of Bulleit Rye with Angostura bitters and thyme syrup. It is refreshing with a thought-provoking balance of sweet and savory, yet at the same time the formulation is simple and lends itself well to quick preparation. Trillium will happily customize cocktails to the customer’s preference, and it is worth stating that they offer a very broad range of wine and beer, even from some of the smaller, boutique distributors found locally.

As Avey goes on to discuss the challenges and excitement of maintaining quality even on larger scales, she begins plating up her cod chowder. The creamy stew itself is an updated version of the New England style, incorporating parsnips with potato, fennel, Pernod, and Aleppo chili along with a showering of fresh herbs, most notably tarragon, and the requisite bacon lardons. When it is served with pillow-soft, warm focaccia, I simply cannot imagine a dish more suited to a Maine wedding in the fall, nor can I imagine one more universally crowd-pleasing.

Avey and Casby, after only three years in business, have garnered some high-profile clientele, most notably Bettina Doulton, owner of Cellardoor Winery in Lincolnville. Each year they are responsible for hors d’oeuvres and dessert at Doulton’s famous VinFest celebration, where Trillium has become known for grand presentations. During the Paris-inspired party one year, the team placed a buffet of sweets on a replica of the Japanese footbridge painted by Claude Monet.

“Bettina gives us so much creative control at VinFest, which is so fun,” Avey says, “Not to mention it often results in new dishes that we add to our menus for weddings.”

Doulton praises Trillium for their execution, recalling, “Last year they managed the kitchen and table service for our four chefs and 250 dinner guests. It was flawless—the vision of their 45 team members lined up in the kitchen proudly, waiting to deliver the first plate, always makes me smile and breathe a little easier.”

What is most impressive about Avey and Casby is the manner in which they are able to breathe life and impart flair to what can so often be such a stagnant affair. There is nothing “prime rib, chicken, or fish” about what they do, as each dish tells a story, while also being customized to be practical for service. With so many factors in play on the all-important day, it is comforting to know that the crew in charge of the feast is as excited as you are about exceeding all expectations.

As Doulton tells me, “They love what they do and it shows.” 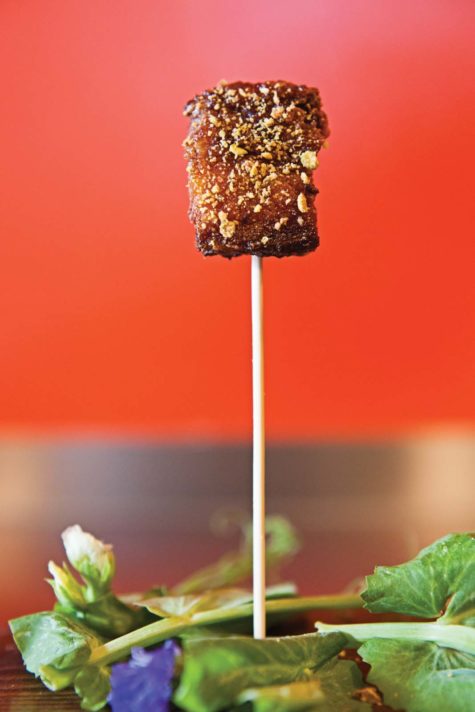 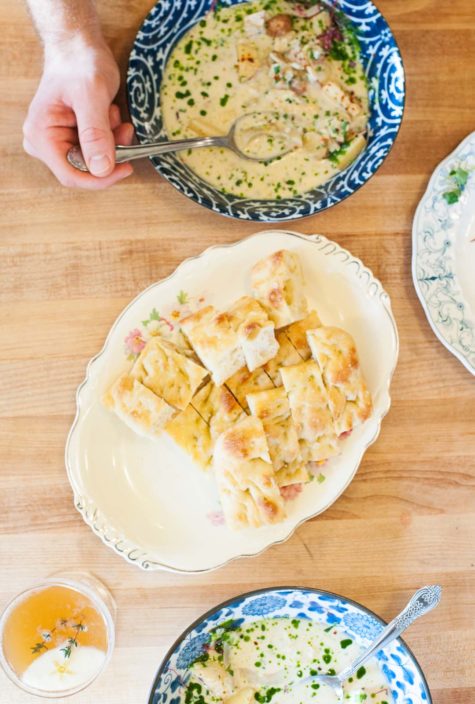 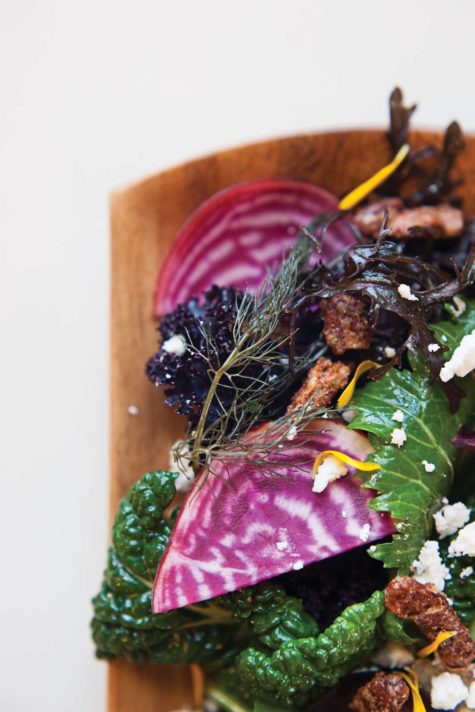