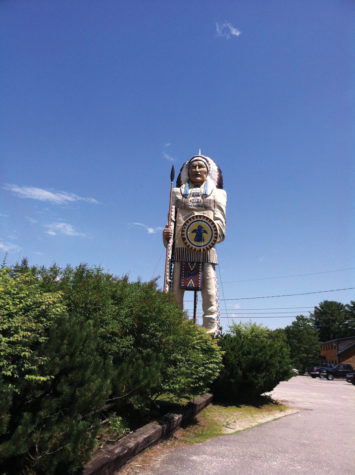 Julian Leslie was a marketer known for his innovative spirit. He owned Casco Bay Trading Post on Route 1 in South Freeport, and in order to pique the interests of passersby bought several undriveable used cars, and parked them out front. “When you see a lot of cars in front of a restaurant, you would think it was good and might stop, so he tried that philosophy with the store,” explains Julian’s son, Michael Leslie, who worked closely with his father. He had good ideas and others that were out in left field, too, but running a business involves risks and Julian Leslie was not afraid to take them. Perhaps his greatest marketing success is the one that still causes people to pull over today: the Big Freeport Indian that stands 30 feet tall along Route 1.

In 1947, Julian opened the Casco Bay Trading Post as a sporting goods store with his twin brother, Bill. Years after being in the retail business, Julian and Bill added handmade moccasins to their inventory. Later they built a factory to stitch the shoes in-house. A true entrepreneur, Julian was always reacting and adapting his company to the surrounding world. One day while having lunch at Brown’s Wharf Restaurant in Boothbay Harbor, the large fiberglass Old Lobster Fisherman statue out front got him thinking, and sketching. Soon he had a drawing of a Native American and the contact information for Rodman Shutt in Pennsylvania, who had built the fisherman and other roadside statues around the country. For $5,000, Julian commissioned Shutt to build him the 1,500-pound, 8-foot- wide, 30-foot-tall figure made of fiberglass, plywood, and steel rods.

Traveling from Pennsylvania on a flatbed trailer, causing much rubbernecking traffic on the New Jersey Turnpike along the way, the Big Indian arrived at the Trading Post on August 26, 1969, with much fanfare. Newspaper reporters and photographers, townspeople, and the Leslies gathered round as the sculpture was lifted off the trailer with a crane and installed in front of the store.

In 1989 Julian retired and closed the Trading Post. Over the years, the Big Freeport Indian has inherited some other playful nicknames and has been the target of practical jokes—a few times employees arrived to find arrows lodged into the Indian’s back. New businesses have since been established in the area, but the towering chief remains. With his decorated headdress, tall spear, and fierce expression, he has become a navigational marker and a landmark that still commands the attention of those who drive down Route 1 and enter Freeport.