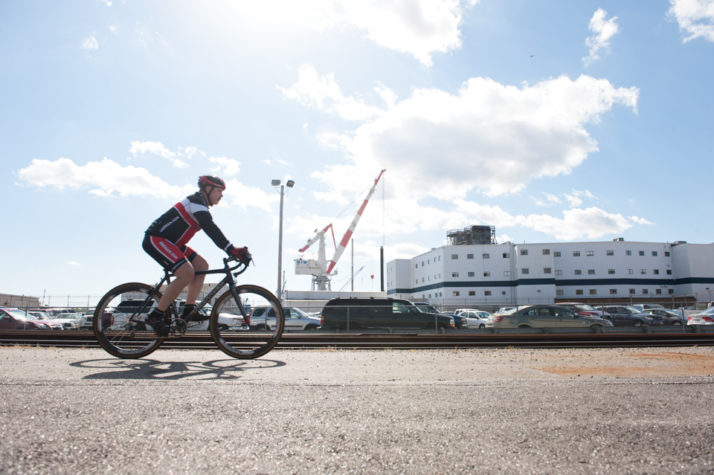 Electrical designer Lee Strout of BIW takes his bike out for a spin in downtown Bath. His pep talks with a company-supported health coach help him keep his fitness goals on track. 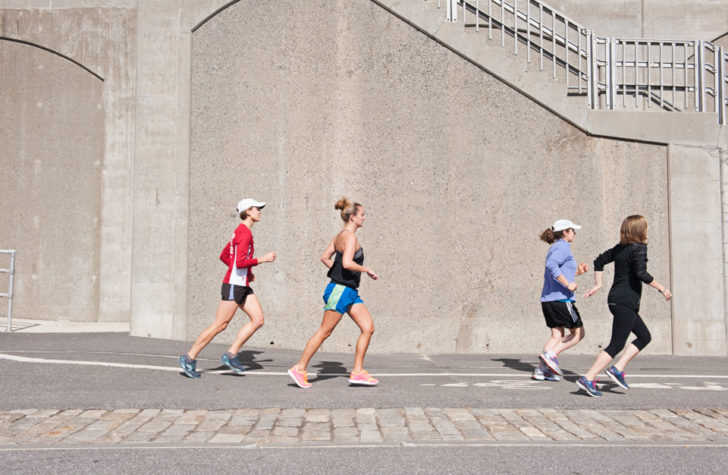 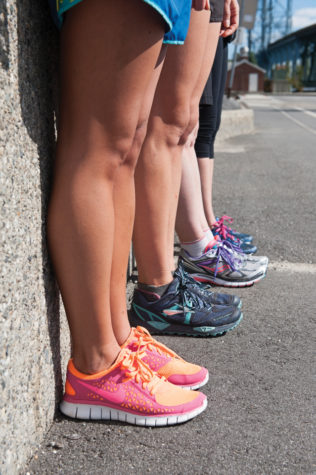 BIWs Fit for Life program helps employees stay active and energetic, which gives them a new zeal for work and ideally a competitive edge. 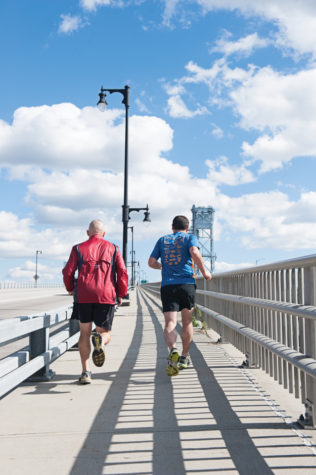 Workers from Bath Iron Works run over the Sagadahoc Bridge during lunch. 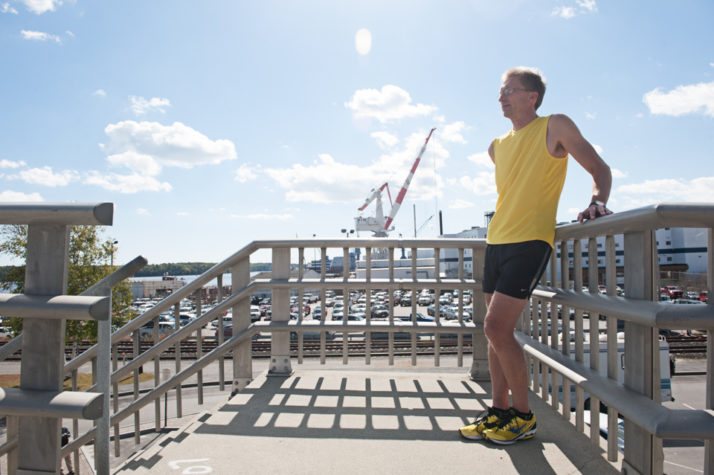 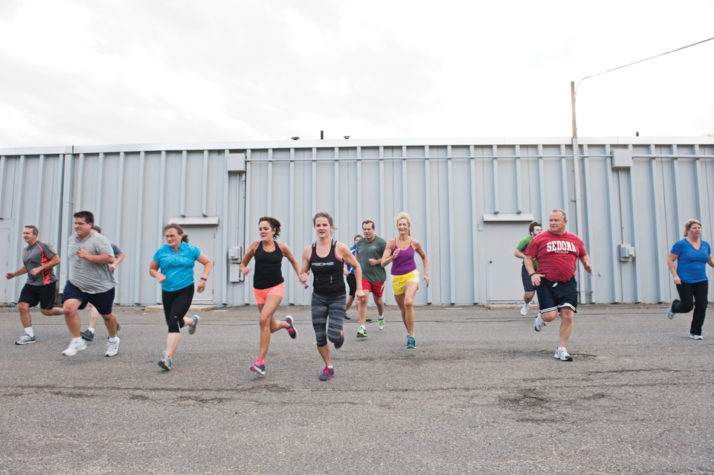 L.L.Bean workers have access to daily fitness classes on campus. 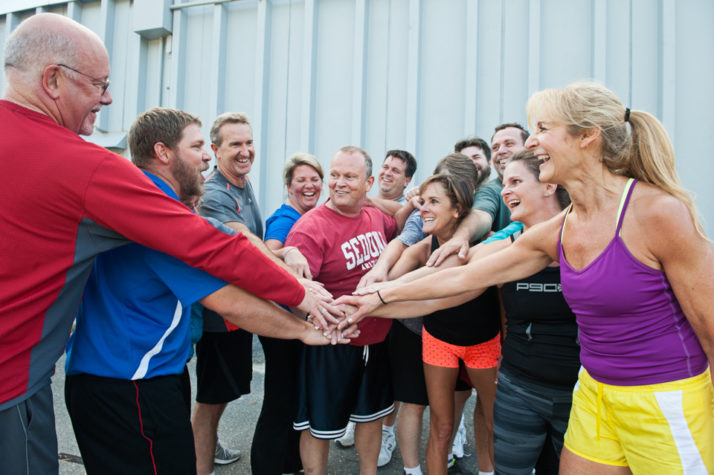 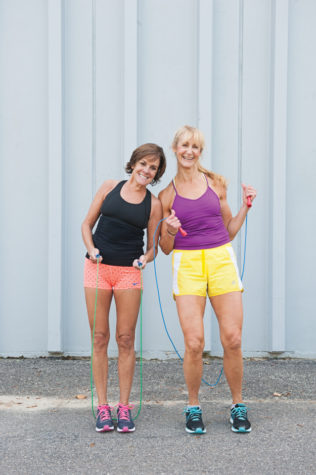 L.L.Bean has had a wellness program for over 30 years. These women are part of Healthy Bean, a program that encourages employees to get their heart rates up and de- stress.

As a leading shipbuilder and defense contractor, General Dynamics Bath Iron Works builds sea-going juggernauts for the powerful U.S. Navy. To encourage employees to be as rigorous about their health as they are about their work, the company is increasingly turning its attention to the well-being of its staff.

With 5,600 employees, the largest manufacturer in Maine offers company perks that are not flashy but could, like the mighty vessels they build, protect and save lives. “As our workforce grows we have seen the trends of gyms and cafeterias emerge as the big thing,” says Jonathan Mason, the company’s director of human resource services. “We think community health screenings to get family members engaged can further help employees with chronic diseases, like diabetes, find resources to manage that.”

To further workplace wellness, BIW has sidestepped steamed broccoli in the cafeteria to make registered dieticians and nurses available to staffers and their spouses. These motivated pros, consultants from health coaching company TrestleTree, Inc., devise individual health plans under the company’s four-year-old Fit for Life program.

With tight deadlines a constant, employees can’t easily leave for doctor’s appointments. To keep their health in balance, the company partners with Mid Coast Hospital to set up mobile health screenings in conference rooms, trailers, and even aboard ships. Technicians and nurses check employees’ cholesterol and blood pressure levels, and calculate their body mass index.

More than 2,000 workers took advantage of the screenings in 2014. Some didn’t realize that their health was in jeopardy. For electrical engineering manager Bob Dundas, a hale-looking 50-year-old, the screening was a wakeup call. “I was exercising once in a while on my own. I didn’t know I was in as bad a shape as I was,” says Dundas, who has worked at BIW for 29 years. “When I did that assessment, it opened my eyes.”

He discovered that the stress of managing 60 people was starting to show. His cholesterol was too high and he was carrying 30 extra pounds. Dundas was paired with health coach Amanda Hopkins, who told him he was on the road to poor health. Together they charted a better course.

Beyond devising a diet he can stick to, Hopkins meets with Dundas every few weeks for a one-on-one consultation. “Making healthy snack choices like eating an apple,” instead of cookies or chips, between meals proved effective, says Dundas, who runs on his lunch break over the Kennebec River when time allows.

He lost weight and lowered his cholesterol over the course of a few months. And, most importantly, has kept it in check. Beyond better food choices, which most people understand already, was the calming reassurance that somebody at work cared— not only about his mental performance but his physical health as well. That wasn’t exactly the case when he started at Bath Iron Works in the 80s.

“They have, certainly in my mind, changed their focus on the importance of an employee’s health. They understand that an unhealthy employee is an unhappy employee,” says Dundas, noticing that his coworkers are starting to look and feel better. The new emphasis on health behind the gates “has made a significant difference in lots of people’s lives, like myself.”

As a whole, he says employees who have gone through the program are “more active, more energetic, and apply themselves better to the job. I give the company credit for making it so easy. It has had to cost them, but it makes a big difference.”

His colleague, electrical designer Lee Strout, who sits at a desk all day, had a similar epiphany through the program.

Fearing becoming a “computer jockey whose main goal in life is to see if they can get bigger than their chair,” he turned things around by becoming aware of his triggers with help from Hopkins. “My problem was more nutrition than getting off the couch,” says the self-described “depression eater.”

At company headquarters in Bath, where a handful of Navy destroyers are always under construction, employees like Strout, a cyclist, dart out for a run or ride. During their lunch hour, some return with sandwiches in hand, others with a glow from physical exertion.

Dundas, who has flextime during the week, has the luxury of sneaking in a run during the day from time to time, and jumps at the chance. It’s opportunities like this that make him want to stay here. Such perks could also be attractive to younger employees desiring a less rigid work environment.

“We have been building ships on the Kennebec River for over 120 years,” says Mason. “BIW has an inherent responsibility to employees who have to be competitive.” With an aging workforce— the average age of employees is 49—“the company needed to get healthier,” Dundas notes.

Back in 1986, when he started at the company, improving employees’ physical condition was not a company imperative. “We grew old and got out of shape,” admits Dundas, who took advantage of the screening when it became available because it was a no-brainer. “It was laid out on a platter for you. There is no excuse for not going.”

Another Maine institution, L.L.Bean, takes health as seriously as their commitment to outdoor gear backed by a lifetime guarantee. Onsite fitness classes and time off to get active outdoors are part of company policy, but in the call centers, where workers are mostly sedentary, innovative programs such as Bean Strong are influencing employee health.

Bruce Walker, director of operations and customer satisfaction in Bangor, Lewiston, and Portland, says for some employees, who are responding to customers by emails, social media, or phone calls, staying healthy, mentally and physically, can be a challenge. There are fitness rooms in each L.L.Bean facility; however, some employees are too intimidated to visit. So Walker sought to change the culture and offer accessible programs to employees looking to lose weight and live better on their own physical playing field. Enter Bean Strong.

Tested in Bangor three years ago, the initiative makes working out during the day, for people with a body mass index greater than 30, possible. “It’s on their schedule,” says Stephanie Harvie, wellness operations manager at L.L.Bean.

Employees who qualify for the program receive three hours a week of paid time for group exercise instruction. They are also granted an hour of nutrition education every two weeks and partake in monthly emotional well-being sessions. The time is supported within their regular work schedule, says Harvie, so it is easy for employees to take part. “Due to the positive impact and success the program has had, it is no longer a pilot but rather becoming a part of customer support culture being offered annually at all contact centers,” says Harvie.

And because managers condone this time, these employees get something else: “social and verbal support from peers,” says Harvie. “Coworkers say, ‘yes, you can do this, we want you to do this.’”

To Walker, who has seen great strides in the mental and physical health of employees, “It has been the most successful and emotional experience in my 33 years here,” he says. “We tell these folks, ‘we are going to work with you because it’s our desire to have a better and healthier you.’”

According to Walker, the results —lower blood pressure, better attitude, positive self image, and fewer employees on medication — were astounding.

By engaging those most at risk and creating a comfortable atmosphere to improve their nutrition, mental health, and physicality, the company sends the message that, “We care. That is what we are saying, and that was the difference,” he says.

Those who participated in the pilot program, which is slated for rollout in all L.L.Bean call centers this year, found that it worked. Some lost upwards of 67 pounds, Walker says.

“I would have employees stop me that would be in tears. They never envisioned being off medication,” says Walker. “They said ‘this has made a difference in my life.’ It surprised me how emotional it was. I was moved to tears. We helped people get empowered and get to where they never thought they would be.”

As Maine’s economy diversifies, and more companies relocate to the Pine Tree State, these historic Maine operations are taking the initiative to safeguard their most important asset: their employees. L.L.Bean and Bath Iron Works have united for a diabetes prevention workshop held in various locations, like local YMCAs and the L.L.Bean campus. Because prevention is a key part of wellness, employees and their spouses are encouraged to participate.

“These folks are sitting in the row and saying ‘this company is unbelievable. I can’t believe it. I feel good.’ It’s huge, and they become goodwill ambassadors,” Walker says. “When I retire, I will look back on this and say, ‘at least I did that.’”