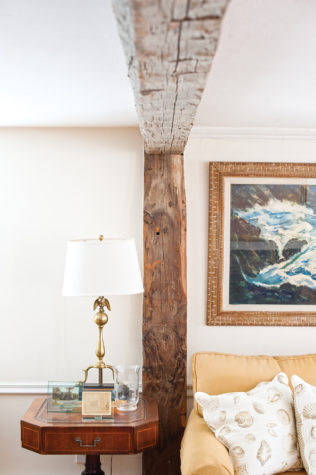 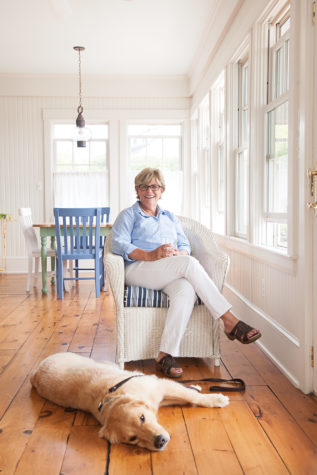 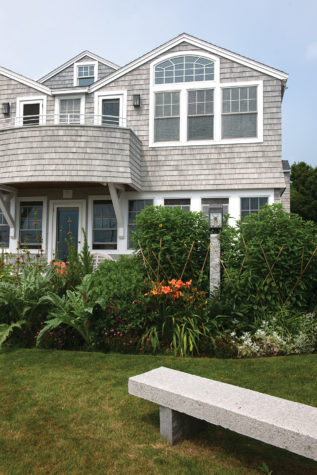 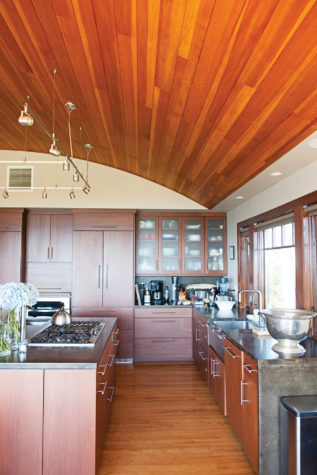 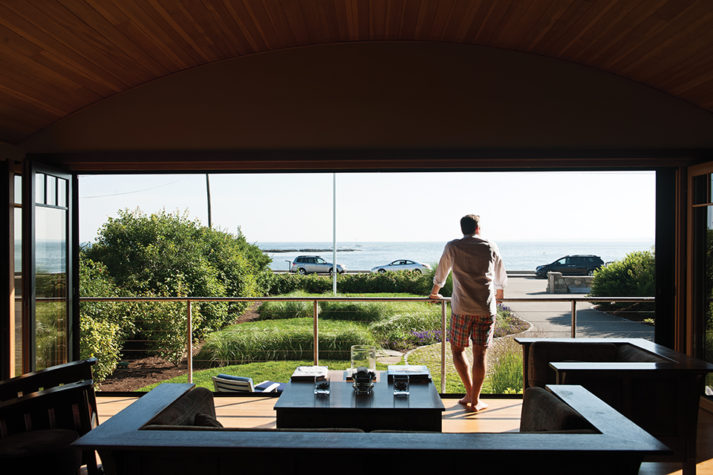 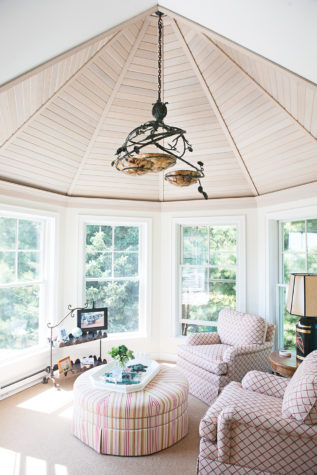 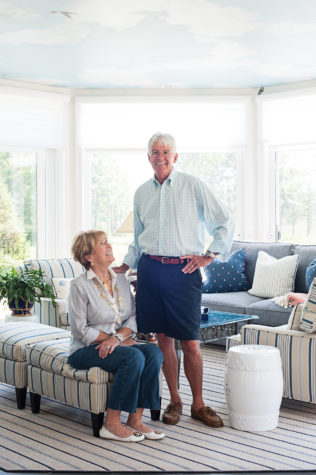 If you happen to find yourself in the Kennebunks in early June, walking around the Port or bridging the gorgeous gap between one Kennebunk beach and the next, you’re likely to see, hear, and smell what smells, sounds, and looks to be a most delicious dinner party, the kind you wish you could join.

Here’s a surprise: you absolutely can. For several years now, homeowners in the Kennebunks have been welcoming some of Maine’s best chefs into their kitchens, inviting family, friends, and strangers alike to break bread at their tables as part of the Kennebunkport Festival’s Art of Dining dinners. The goal is to raise money for organizations committed to ending childhood hunger in Maine, such as 2015 festival beneficiary Full Plates, Full Potential. Granted, these are special occasions for a special cause—stylistically varied and distinctly beautiful, these homes will be filled in June with original artwork, the tables lined with flowers and glassware to catch the candlelight. But beneath the veneer is one of the most basic, most human sort of events there is: a dinner party.

I am of the mind that it is never too early to start discussing what’s for dinner. As a girl, listening to my mother and my great-aunt talk steak and asparagus over morning coffee signaled that the evening to follow would be my favorite kind, filled with interesting strangers and people I loved. I relished being put to a task before a big family dinner in the summertime—driving to the pie stand with my grandmother after lunch or being shooed out onto the back porch to shuck corn in the late afternoon. The food was what brought us together, but the main thing was the togetherness, the conversation, and how the mood of the room changed as the light began to fade.

Maine has an absurd number of good restaurants—of that, we are blissfully aware—but there is nothing quite like sitting down to dinner in someone’s home, in a space of their making, where they can most be themselves. Kennebunkport is the perfect setting for an early summer celebration because the spirit of hospitality is alive and well in this coastal community. Take my word for it: all over the Kennebunks people are planning menus for friends and family, washing sheets and fluffing pillows, and filling vases with fresh flowers in anticipation of some special someone’s arrival.

Anne Raffaelli found her family’s beloved beachside home by accident. Her friend was looking to buy a place in the Kennebunks and had asked Raffaelli to join her on a tour with a realtor. The friend found a house, but in the end—to Raffaelli’s surprise—she did, too. Set back from Mother’s Beach, the old cottage was in rough shape when the Raffaellis purchased it in 2001, but Raffaelli, who had just concluded a decades-long career on Capitol Hill, most recently as the chief of staff to U.S. Congressman Fortney “Pete” Stark (D- CA), was more than ready to tackle a very different kind of project: to create a special space that would become a gathering place for her family.

Regularly visiting from Virginia to check on the progress of the 18-month-long renovation, Raffaelli met such kind and welcoming people that the Kennebunks started to feel like home well before the house was finished. Gracious couples like Ralph and Louise Hurlbutt, who have also hosted Art of Dining dinner parties in their home, invited her over for dinner, and eventually invited her to stay with them when she came up to check in on the house. And soon after the Rafaellis moved in, they invited their extended family to become part of the Kennebunk community, too.

At events like their annual Fourth of July party, the Raffaellis have hosted as many as 170 people for smoked brisket and ribs and a potluck dinner on the front lawn, with the nearby ocean providing a soundtrack of surf and gulls. “We would not have built anything this big, but this was what came on the lot,” says Raffaelli. “So John and I thought about how we could share this place with our friends and families.” Their adult children and grandchildren join them for much of the summer, and so do their brothers and sisters, nieces and nephews, and great-nieces and nephews; it is not uncommon for the house to be filled with dozens at a time. The house is both exceptionally beautiful and comfortable, with subtle nods to its nautical surroundings. “I knew people would be sitting down on the furniture in wet bathing suits no matter what I said,” Raffaelli informs me with a laugh. “So it’s all machine-washable.” One of my favorite features is the long, sturdy dining room table. This, of course, is where Raffaelli and her family and friends sit down to home- cooked dinners all summer long.

Tucked back a little ways from the beach, on the edge of a marsh like a scene from a painting, the Clarkes’ grandchildren are also enjoying family-filled summers. Cindy and Jeffrey Clarke, originally from New Hampshire, were introduced to the Kennebunks through their daughter in law, whose parents still spend summers nearby, making it possible for their shared grandchildren to visit with both sets of grandparents in a single day.

Jeff Clarke had enjoyed summers in Maine as a boy and was excited to return to the coast after spending decades vacationing on a lake near their hometown of Keene. The Clarkes have spent the past few years lovingly renovating their home, putting thought into each and every detail, considering how their friends and family might get the most and best use out of every living space. They’ve even considered the chefs who, during the Art of Dining dinners, make beautiful meals in their kitchen.

When I visited with the Clarkes last August, they had just said goodbye to a group of close friends visiting from Florida. Like everyone I talk to, they enjoy entertaining in their home but also showing their friends all that the Kennebunks have to offer—the dynamic landscapes, outstanding restaurants, and gregarious people. I recognize and appreciate that pride of place and pleasure in sharing. Walking through the house, they tell me story after story—of the beautiful antiques purchased from Antiques on Nine or Hurlbutt Designs, and of the whimsical enclave designed especially for their beloved grandchildren.

For the past several years the Pressly family has gathered in their 1784 Georgian Colonial in Kennebunkport’s darling downtown. Patriarch and matriarch Jamie and Katie Pressly open their home to their children and grandchildren, siblings and cousins, who unanimously adore the house with its wide plank floors and original timber beams, its classically decorated but exceedingly comfortable living rooms and bedrooms. Located right in the heart of Kennebunkport, the Presslys’ days often spill out into the streets and out along country roads, sometimes beginning with breakfast at H.B. Provisions, followed with a kayak on the Kennebunk River, or perhaps a bike ride out to Cape Porpoise for fried clams at the Ramp or to Mother’s Beach, where their granddaughters love to fly kites. “But this home is our haven,” says famously friendly Katie Pressly. “This is the gathering place, the touchstone for what matters most to us: family and friends.”

Rick Taranto feels the same way about the home he shares with his husband, Jon Ellms, and his daughter, Olivia. “This is the place where we can actually take a deep breath and connect and be with people we love,” he told me last summer. “Maine gets in your bones like no other place I’ve ever been.” We were chatting in his open- concept kitchen and living room while he prepared food for friends coming over that evening; the pharmaceutical researcher put his career on a brief pause to start up a wedding rental company in Maine and give culinary school a whirl, so he knows what he’s doing. In an even more recent turn of events, Taranto and Ellms have purchased Kennebunk wine bar Old Vines.

In terms of style, Taranto and Ellms’s home is the antithesis of the Presslys’ classic colonial, but just as beautiful, with an entire wall that opens to face the Atlantic. The smell and sounds of the ocean fill the space. It was a warm, sunny day in August when we met, but Taranto adamantly told me that he loves this house in any weather, in every season.

Since purchasing this home a few years ago, the couple has been coming up from Boston every chance they get, at any time of year. In no time at all, the Kennebunks felt more like home than any other place they had lived, and when they started to plan their 2011 wedding, Taranto and Ellms agreed that it didn’t seem right to hold the ceremony anywhere else. “We wanted the wedding to feel like a dinner party with our favorite people in our favorite place,” Taranto told me.

A dinner party. I couldn’t help but smile. For the past few years, as part of the Kennebunkport Festival, Taranto and Ellms have hosted just the sort of dinner party that forces passersby to pause and think: Now that looks like fun. I have no doubt that it was fun. And not just because of the flower-filled tablescape, wildly elegant furniture, and food prepared by award-winning chefs, but because of the company.

“Coming here we started to meet the most amazing friends we’ve ever had. Our mindset has totally shifted to where this is home. This is where we want to be, the place we can’t wait to get back to,” Taranto told me while putting the finishing touches on a Mediterranean-inspired plate of appetizers for his friends, due to arrive any minute.

“Now how does that look?” he asked.