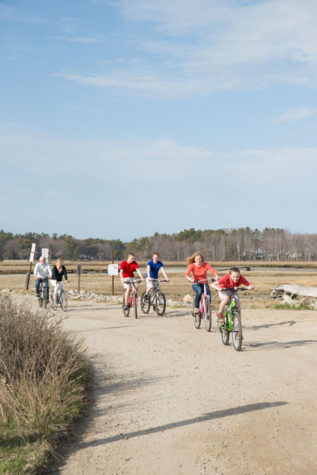 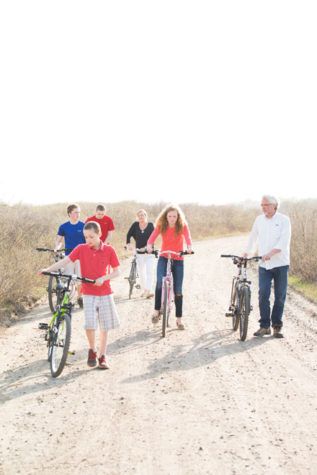 The Bard family sets aside time on weekends to play together. They especially enjoy biking around the Kennebunks and camping near Moosehead Lake. 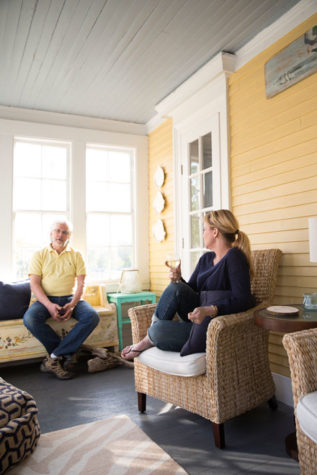 Tom and Shannon share a quiet moment at their Kennebunk home. 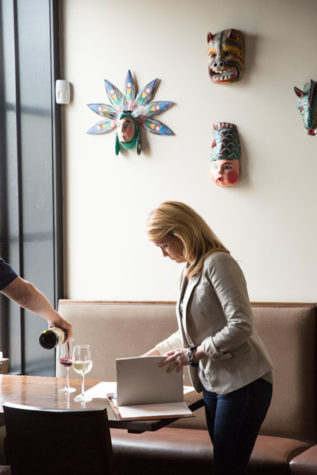 Shannon, pictured here in Zapoteca, attributes her passion for cooking to her mother and grandmothers, and her interest in Mexican cuisine to her Oklahoma upbringing. 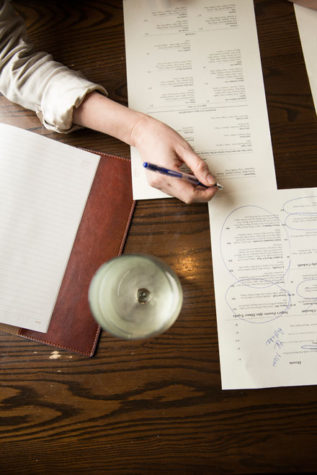 Tom and Shannon take time to collaborate on the menu at their Portland restaurant. 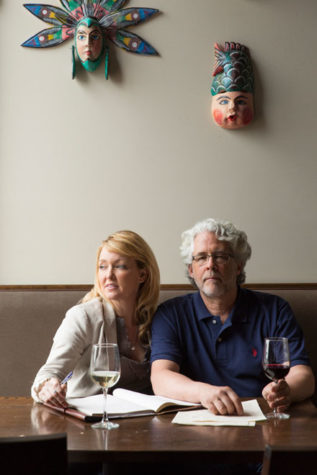 Tom & Shannon: Collaborating in the Zapoteca Kitchen and at Home

In collaboration with her husband, Tom, she opened two busy Mexican restaurants, published a cookbook, appeared in (and won!) the Food Network’s Kitchen Inferno competition, and cooked at the James Beard House in New York City. The Bards are also in the midst of raising a good-sized family: they have five children, four of whom are under the age of 18.

“Most people start their careers when they are 20, and they are burnt out by now,” explains Shannon, 45. “I took the opposite path: I started in my 40s. I have a short time to make a go of it.” A former corporate recruiter and homemaker who began her formal culinary education when her youngest child started kindergarten, Bard has become one of Maine’s most recognizable new chefs.

Tom, 60, has more than four decades of food service experience—much of it at the corporate level, providing managerial expertise for restaurants such as Applebee’s, Pizzeria Uno, and Ruby Tuesday. He is highly appreciative of Shannon’s talent. “She’s got incredible power,” says Tom. “She is really good with food and combining flavors.”

The Bard’s first restaurant, Zapoteca Restaurante y Tequileria, opened on Fore Street in Portland on June 23, 2011—the day before Shannon’s forty-first birthday. Zapoteca quickly became known for its authentic Mexican cuisine served with a creative flair. The restaurant offers seven different salsas: everything from a classic salsa fresca, featuring fresh tomatoes, serrano peppers, and onions, to a spirited salsa de anacardo, created with fire-roasted cashews and smoked jalapeños. Shannon created each of these salsas as a way of showcasing different flavor combinations.

When it comes to cooking, the Bards are always looking for new ways to bring friends to the table. I first met the Bards at the Kennebunkport Festival, a charitable food and wine event located in their hometown. Shannon, a petite blonde clad in a professional chef coat bearing her name, was preparing a savory ceviche. With a mother’s ability to multi-task, she was simultaneously plating fish morsels and greeting guests as they walked past. She was able to see what needed to be done in order to create delicious food and a rewarding social experience so that guests felt nourished in more ways than one.

Nothing escaped her eagle eye. “She is meticulous,” says Tom. “She can be a pain sometimes with how intense she is. We call Shannon the butterfly. When she sees something that needs attention, she focuses on it until it is 100 percent.”

Tom is no less mindful of the details that make for an exceptional dining experience. Whether Shannon is working in the restaurant or off-site, Tom is usually not far away, providing his own high-level support, from welcoming guests to coordinating deliveries.

Tom began working in the food industry as a high school student in Berkeley, California. Born in San Francisco, he was adopted at birth by a doctor and his wife, a schoolteacher. When his parents divorced, Tom moved with his mother to Las Vegas, before settling back again in Berkeley. After graduating from high school, Tom earned a degree in classical archeology and linguistics at San Francisco State, and spent a few years working in real estate development. “But I always loved the people aspect of the restaurant business,” comments Tom. “I couldn’t stay away from it.”

Meanwhile, Shannon was helping out on the family farm in Chattanooga, Oklahoma, (population 400). Born in Garland, Texas, Shannon moved to the Sooner State when she was six months old. She began driving farm equipment at the age of nine. “In the winter we carried five-gallon buckets of water for the animals, and got up early to feed them before we went to school,” Shannon remembers. “Our jeans would be frozen stiff from carrying the sloshing buckets of water in the ice cold. We did this all over again in the evening.”

From Chattanooga, Shannon moved on to Oklahoma City University, then the University of Oklahoma. Like Tom, Shannon was a people person and became a member of the sorority Gamma Phi Beta. “The after-school activities were more important to me than classes,” she laughs. “I enjoyed the social scene.”

When her mother lost her arm in an accident back in Chattanooga, Shannon’s view of life forever changed. She decided to explore the greater world before settling down after college. She followed her then-boyfriend, a Navy pilot, to Pensacola, Florida, then to San Diego, California, before that relationship ended.

By 1995, Tom was also in San Diego, serving as the regional vice president at the Applebee’s where Shannon had taken a position as a waitress. They fell in love, and Shannon quit her waitressing job to travel with Tom as he managed Applebee’s locations across the country. “We were someplace different every weekend,” says Shannon, “Back and forth from Reno to Santa Fe.”

The Bards married and moved to Massachusetts, where Tom had lived for several years as a young adult. This would enable him to be closer to his daughter, Ashley. Pregnant with their first son, Dylan, Shannon kept the home fires burning while Tom continued to travel— now internationally—offering franchise support for Pizzeria Uno in Middle Eastern locations like Dubai. Shannon began connecting with her love of cooking. “It was a way to use my creative side that provided immediate gratification,” says Shannon.

Travel-weary and wanting to be more present for his wife and children, Tom knew that a job change was in order. He became the franchise owner of ten Ruby Tuesday restaurants in Maine and Massachusetts. The Bards had moved to Maine in 2001 and had their son, Devin, and their daughter, Logan.

During this time, Shannon was developing a reputation as a talented home chef. “I would come home to a house full of neighbors,” says Tom. “They would be drinking wine and enjoying something tasty that Shannon had cooked.”

Once the Bards’ last son, Camden, was in kindergarten, Shannon was ready for the next phase in her life. After taking culinary classes at York County Community College, she decided to concentrate on Latin cuisine—a nod to her Southwestern roots—and continued her education at the Culinary Institute of America campus in San Antonio. One day, while Shannon was in San Antonio, Tom called with important news: he had found space for the restaurant that would become Zapoteca.

From that point forward, their life would become a culinary adventure. Two years after starting Zapoteca, the Bards opened a sister restaurant, Mixteca, in Durham, New Hampshire. Eventually, they would begin offering food preparation for events through their company, Salud Catering by Shannon Bard.

Their hard work paid off. By January 2014, Shannon had been invited to cook at the prestigious James Beard House in New York City. Soon after, she went on the Food Network’s Beat Bobby Flay. Although unsuccessful in that competition, she was also asked to cook on Kitchen Inferno. After four rounds against top chefs, she won the $25,000 jackpot, beating celebrity chef Michael Chiarello. Throughout Kitchen Inferno, Tom Bard could be seen in the studio audience, cheering on his wife from the balcony.

This February, Shannon launched her cookbook, The Gourmet Mexican Kitchen: Bold Flavors for the Home Chef. The book features recipes such as mariscos de campechana (mixed seafood cocktail) and tarta de limon (lemon tart) and showcases pictures of the Bard children—taken by photographer Ted Axelrod—assisting in the preparation of Mexican delicacies. Themes of home and family run strong. Dedicating the book to Tom, Dylan, Devin, Logan, and Camden, Shannon writes that it was created in memory of her mother and grandmothers, “Who taught me a love of cooking that has now become my passion.”

The Bards maintain a strong commitment to their children, and to family time together. Sundays are especially important. Tom, a cyclist who has participated in Trek Across Maine, uses these days to organize bike rides with the kids. “We like to stop at Bennett’s in Kennebunk for sandwiches,” says Tom, “and take them to the beach for a picnic.”

“All of this is part of the juggling we do,” says Tom. “Neither Tom nor Shannon seems deterred by the juggling act.

“I know this is what we are supposed to be doing,” says Shannon. “This has all been made possible because of Tom and an amazing support system. I am enjoying every minute of it.”