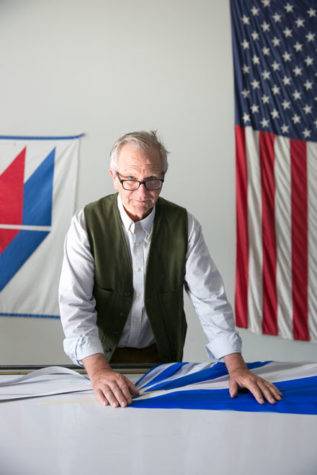 I want to find out exactly what the customer wants and do that, says Fowler, pictured here in his Freeport sailmaking loft. 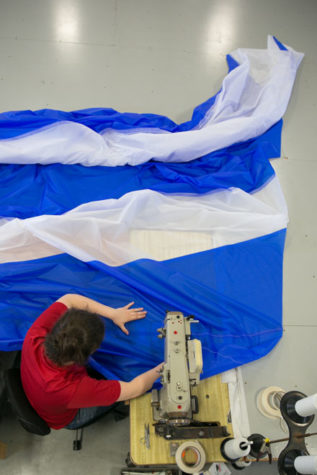 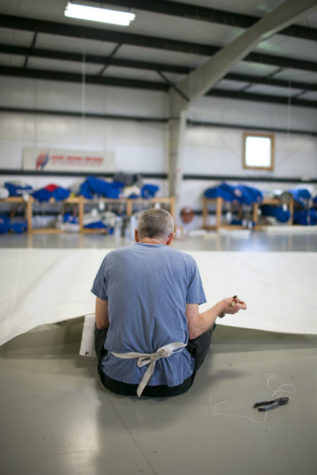 Jake Graves does final handstitching on a mainsail. 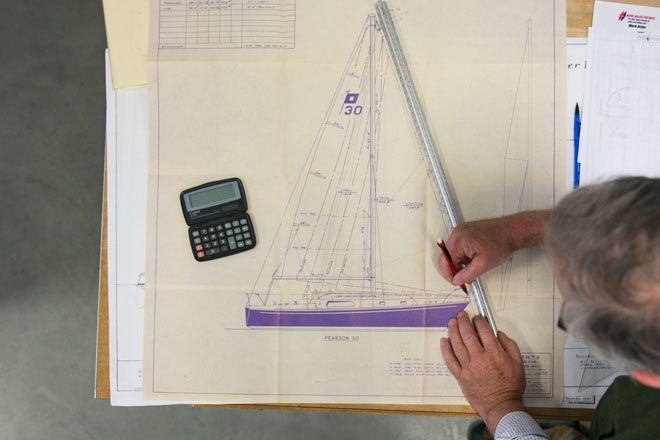 Measuring a sail plan for a new genoal 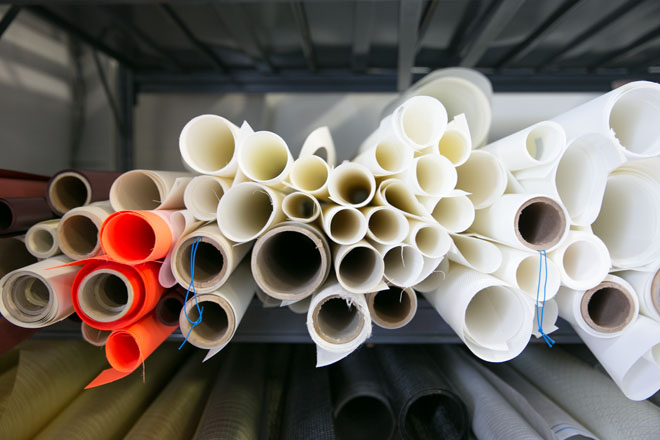 The sail loft is filled with materials of all colors, sizes, and textures.

Win Fowler of Maine Sailing Partners I want to find out exactly what the customer wants and do that, says Fowler, pictured here in his Freeport sailmaking loft.

Lately I’ve been asking sailors from Portland if they know of Win Fowler. Most of them say yes. Some bypass yes all together and tell me straight up, “That man’s a legend.” Since meeting Win Fowler, I can imagine how he might respond to this claim: with a barely audible chuckle, a dismissive wave, a dash of exasperation, and other manifestations of genuine Yankee humility. Fowler doesn’t suffer fools gladly. And exaggeration? Not in the least. So, for accuracy’s sake, let’s begin with some uncontestable facts: Win Fowler is the owner of the sailmaking company Maine Sailing Partners, which is based in Freeport. He is one of the most well-regarded sailmakers in the country. He is also a Gulf of Maine Ocean Racing Association champion, which is another way of saying that he is a damn good sailor.

Earlier in the summer, I made my way north along Route 1, past the hubbub of L.L.Bean, and turned down a woodsy road to find the Maine Sailing Partners sail loft sandwiched between an old farmhouse and Interstate 295. I parked next to a truck sporting a Bowdoinham Fire Department bumper sticker and entered an industrial- looking space filled with music. At the center of the large room, two men were busy laying out a large piece of canvas upon an elevated platform. Around the periphery were clusters of machinery and materials— stations where Fowler and his team tackle different stages of the sailmaking process.

Win Fowler emerged from a collection of desks and computers and partitions—what you might call the office portion of the loft—to greet me, wearing that familiar Maine uniform that’s all about quality and comfort: worn khakis, plaid shirt, light vest, glasses. Hesitant to talk about himself, he opened our conversation with a boiled-down introduction to the sailmaking process.

Depending on their customers’ needs— whether they’re building sails for dinghies, cruising boats, or racers—Fowler and his team design and make custom sails using a variety of techniques and materials.

Starting with plans drawn up by the boat’s designer, Fowler first utilizes special software to make a three-dimensional mold of the shape the sail will take when it’s flying and then determines the most effective and efficient ways to cut the material according to that design. Depending on the sophistication of the sail, the material is cut and fused together using a variety of computerized machinery and human handiwork. We move around the space in order of production, stopping first at the tables piled with blueprints, moving through the software programs, past the racks of canvases, the rotary blade and drag knife cutter, and 100-year-old sewing machines. Most importantly, I am introduced to the people who put all these tools to use day in and day out, many of whom have been working with Fowler for decades. Fowler himself has been making sails for well over 30 years and has been sailing for almost twice as long as that.

Fowler grew up in Cumberland. His parents were members of the Portland Yacht Club in Falmouth, where Fowler came up through the Junior Sailing Program. He went to high school out of state and then on to Harvard University, where he continued to sail on the Charles River. “I started off as a physics major but I couldn’t hack it,” he says, by way of explaining his psychology degree. The irony isn’t lost on me: sailmaking is all about aerodynamics— he learned to hack it better than most, just later on. After graduating from college in 1969, Fowler moved to New Hampshire, found work driving a truck, and played bass guitar in a blues and rock band. In New Hampshire, he met his wife, Mary Lee Coe Fowler, who is now an author and English teacher. “She had built herself a house in the woods,” Fowler tells me. “She persuaded me that I should quit work to save time and money and live out there. So that’s what we did. We called ourselves subsistence farmers, but that was a glorification of what we did.”

In his mid-twenties Fowler left the woods and returned to the water with his wife and their young daughter. He was happily surprised with what he found upon his return. “When I was a kid and went away to school I swore I’d never come back to Maine,” Fowler tells me. “I thought Maine was the sticks. But Portland had improved dramatically by the time I was out of college. And it kept getting better and better.” This was a time of rediscovery for Fowler, who was back on the water and exploring the coast with a new appreciation for his home state. By now he has seen much of the world by boat—on trips around the San Francisco Bay, across the Atlantic to Sweden—and still Maine remains one of his favorite places to sail. “The thing about Maine is you could spend a lifetime sailing the coast, three weeks every summer, and still never be able to see it all,” he says.

In 1973, Fowler went to work in the sail loft at Handy Boat in Falmouth, where he learned the ins and outs of the craft. Ten years later, with a desire to start his own business, he opened Maine Sailing Partners in a “crummy old building on Commercial Street” that he recalls with a nostalgic smile. Eventually Maine Sailing Partners moved to a space along the Royal River in Yarmouth, and finally landed in its current space—built especially for the company to make and repair any and every kind of sail—in 2008.

Historically, apprenticing in a sail loft has been a rite of passage for aspiring sailors— the education in the mechanics of sailing is unbeatable. Keenly aware of this tradition and passionate about the craft, Fowler went into business with a different mindset than he has now. “I started out thinking, I’m going to be a craftsman, an artisan, and let my craft sell itself.” A self-proclaimed introvert, Fowler learned over time about the importance of collaborating with customers to find out what they want in terms of cost, performance, and durability, and to execute precisely the right product to the best of his ability.

Other changes in his approach to sailmaking were the result of rapid technological advancements. For centuries, sailmaking had been a matter of intelligent guesswork, but the advent of computers and special software—along with the development of new and improved sail material—changed the game. Fowler kept abreast of these changes, and, utilizing all of the tools and materials available to him, he started making a name for himself from his small but well-regarded loft in Maine. In the late eighties, he became a tactician and trimmer on the Formula 40 catamaran Fluid Design in the ProSail professional racing series.

In the early 1990s, Fowler moved temporarily to San Diego to run the sail loft for America3, the defender in the 1992 America’s Cup—a role that solidified his reputation as a local legend. The America’s Cup is one of the oldest and most important sailing races in the country. Faced with unlimited resources and sky-high expectations, Fowler calls this experience “the ultimate graduate school in sailmaking.” The America’s Cup is not only a sailing race but also a race of technological and engineering ingenuity for those spending sleepless nights in competing sail lofts, making cutting-edge racing sails for cutting-edge boats. America3 retained her title that year. Fowler returned home to Maine and got back to business making and repairing sails of all kinds—from sails for small dinghies to large cruising yachts to the racers leading the pack in the Gulf of Maine sail races, which have been won with Maine Sailing Partner sails many times over the past few decades. In the years 1997 and 1998, Fowler himself was the champion.

Fowler recalled these highlights with humility and without the least bit of hyperbole. Then our conversation ended up circling around to the customers who have kept Fowler in business all of these years. Like so many small business owners, Fowler’s biggest struggle has been with overseas manufacturing. Maine Sailing Partners sails aren’t the most affordable sails available, but their customers are willing to pay for custom-designed, hand-built sails made in Maine by Maine sailors. The company works primarily with individual boat owners who value the fact that their relationship with the sailmakers doesn’t end when a sail is shipped, but continues over the lifetime of the product. Maine Sailing Partners is as much about repairing the old as they are about making the new.

Like me, customers are also taken with the space, the people, and the opportunity to observe the sailmaking process firsthand, whether they’re looking over Fowler’s shoulder at a three-dimensional computer model or watching Jake Graves expertly feeding material through the sewing machine with his nicked and taped hands, as I did on my recent visit. The fact that all of this happens under the same roof—this combination of cutting-edge technology and centuries-old craftsmanship—is very Maine to me. Fowler might not exactly agree with my sweeping, and (I admit) slightly sentimental statement, but he is grateful to come from a place where buying local and buying quality matters to so many. His livelihood depends on it, and I would argue that the rest of ours do too.