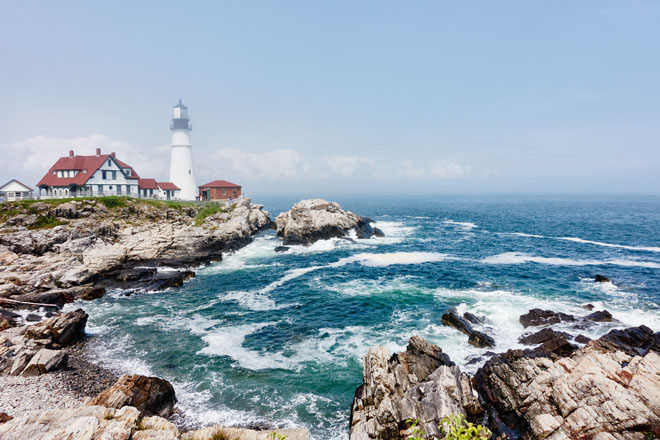 A mist rises off the cold Atlantic waters near Portland Head Light in Cape Elizabeth.

Two and a half miles from where the Kennebec River empties into the Atlantic is Seguin Island. In 1795 George Washington commissioned the construction of Seguin Island Light Station. At 53 feet it is the tallest lighthouse in the state. In 1857 a first-order Fresnel lens was installed in the tower. The largest and strongest type of lighthouse lens, it has 282 prisms; the light from the nine- foot-tall lens can reach over 20 nautical miles. Today visitors can arrive to the island by ferry starting in May, and each summer lightkeepers are selected to live on the island as caretakers.

West Quoddy Head Light is located on a tip of land that is as far east as one can go in the contiguous United States. The red-and- white-striped beacon was built to guide ships passing through the Quoddy Narrows, which run between the United States and Canada. From the lighthouse, visitors look out to Grand Manan Island and Campobello Island in New Brunswick. The original light station was built in 1808 and the current tower was built in 1858. On the peninsula Quoddy Head State Park has a number of trails that run along the cliffs and a boardwalk that runs through a coastal bog.

Portland Head Light is the oldest lighthouse in the state of Maine. It was built in 1791 to help ships navigate into Portland Harbor. Former president George Washington commissioned the tower to be built in 1787. The construction took four years and the masons used rubblestone. It is one of four colonial lighthouses that has withstood the test of time and has not needed to be rebuilt. The iconic tower and accompanying red-roof innkeeper’s house is located in Fort Williams Park, a 90-acre stretch of coastal land. Inside the former keeper’s quarters is a museum with historic lenses and interpretive displays.

In 1832 Samuel Marshall sold four acres of land on the coast to the United States government for $120 so they could build a lighthouse. Marshall Point Light was erected in 1832. The initial tower was made of rubblestone. Today, the structure can be accessed via a wooden ramp from sunrise until sunset and the town of St. George maintains the museum and gift shop. In 1993, the light had a cameo in Forrest Gump.

On a rocky island a few hundred feet off the coast of Cape Neddick is this idyllic red-roof lighthouse that has been depicted by numerous artists and has become a symbol of the surrounding area. The light, affectionately named Nubble Light because of its location on a “nub” of land, was built in 1879 and tended to by the United States Coast Guard members and their families. In 1987 the light became automatic, and today the York parks and recreation department takes care of the property. There is a gift shop for visitors and the park on the edge of the Neddick Peninsula is open year-round: in winter, the lighthouse is trimmed with Christmas lights.

Monhegan Island is ten miles out to sea to Mainers, but to European sailors, the island was often the first sighting of land from across the open ocean. Monhegan Island Light at the top of Lighthouse Hill (the island’s highest point) marks the beginning of Muscongus Bay. The lighthouse was built in 1824 and in 1855 a fog bell was put on Manana Island, south of Monhegan. The Monhegan keepers could press a button that sounded a gong in the Manana keeper’s room notifying him or her to sound the fog signal.

On the southwestern edge of Mount Desert Island, tucked between pines and perched above the granite coast, is Bass Harbor Head Light. The only lighthouse on the island, it is a popular spot for those visiting Acadia, and its red light shines out to sea from the tower 56 feet above the water.

Tales of ghosts and mystery surround Owls Head Light, which guides ships to Rockland Harbor. One such story is of a couple trapped in a schooner off the coast; the chilly waters froze the two solid. An innkeeper saved them, warmed them up, and when they thawed, they were alive. Former keepers talk of eerie encounters at night. But from the water, the 1825-built light is a romantic scene on top of a rocky cliff surrounded by pines. A set of bright white stairs connects the innkeeper’s house to the light located in Owls Head State Park.

Isle au Haut Light was built later than most, in 1907, when the United States Army Corps of Engineers purchased land from Charles E. Robinson to build the white granite and brick structure. The light, which is also called Robinson Point Light, flashes red and white every four seconds.