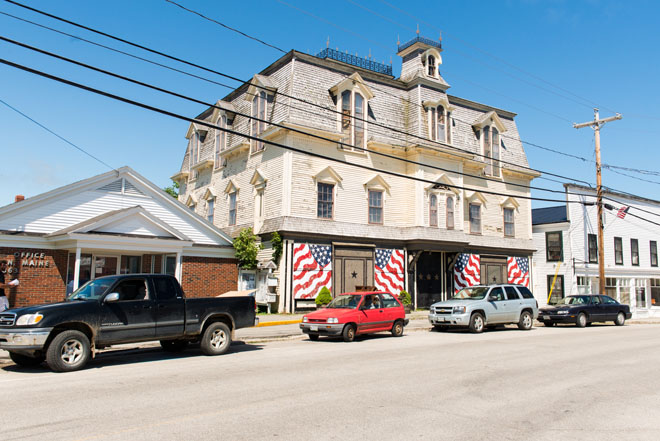 Homes that have been lived in, really lived in, hold inimitable characteristics: worn floorboards and grooves on the dinner table; the structure seems to age with the homeowner. Robert Indiana’s Vinalhaven home is one of these places. While he has not lived there his entire life, he has created something of a museum that holds decades of his work. “It is one of the greatest artist environments of the twentieth century,” says chief curator at the Farnsworth Art Museum Michael Komanecky. “Robert Indiana’s home is filled with everything Indiana has brought there. His whole life as an artist is tied up in that building, which has historical significance of its own.”

Originally built in the 1870s, the pale yellow Victorian known as the Star of Hope Lodge was initially a gathering place for a chapter of the Independent Order of Odd Fellows, an international fraternal organization for men. Photojournalist Eliot Elisofon bought the house, and in 1969 he invited his friend out to Vinalhaven to escape the busy hum of New York

City life. Indiana took the 75-minute ferry ride east and fell in love with the Main Street home. When Elisofon died in 1973, Indiana bought the building, and six years later, he became a year-round Vinalhaven resident.

Today, the building’s 12 rooms hold decades of Indiana’s work. “Bob is an inveterate collector and archivist of his own life. He has kept things for over 70 years now,” says Komanecky, who explains that the now-86-year-old artist still has drawings from when he was eight years old. Curators at the Farnsworth Art Museum discovered the prodigious collection inside Indiana’s island home, and soon after held an exhibit that pulled 80 works from his dwelling. While the house can only be admired from the street, it has been said that on occasion, Indiana may open his doors and give determined passersby a tour.