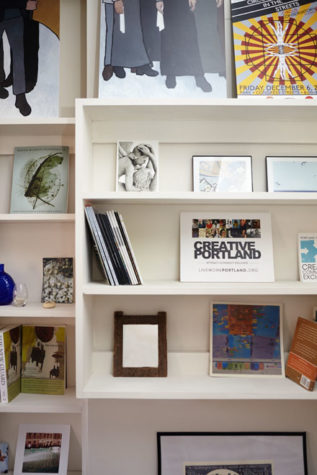 LiveWork Portland is one of Creative Portland's most visible and significant programsa website that showcases the city as a great place to live, build a career, and enjoy its rich and blossoming arts community. 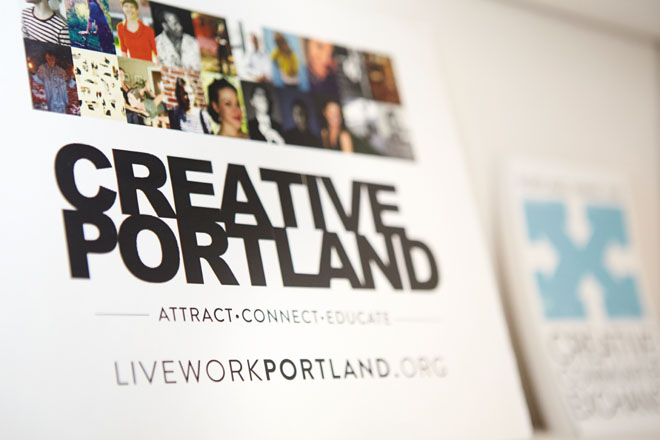 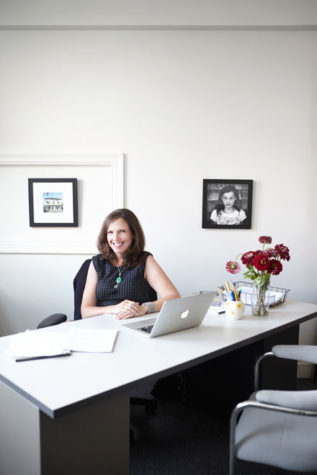 From her High Street office, Creative Portland executive director Jennifer Hutchins works on strengthening support for the arts and continuing the organizations goal of attracting 10,000 creative-minded people to Portland within ten years. 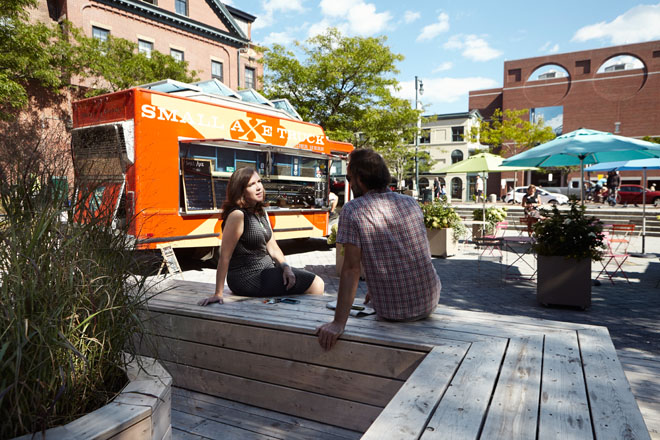 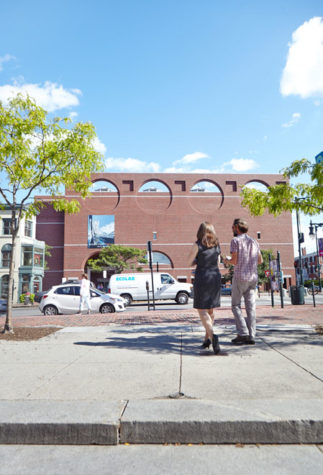 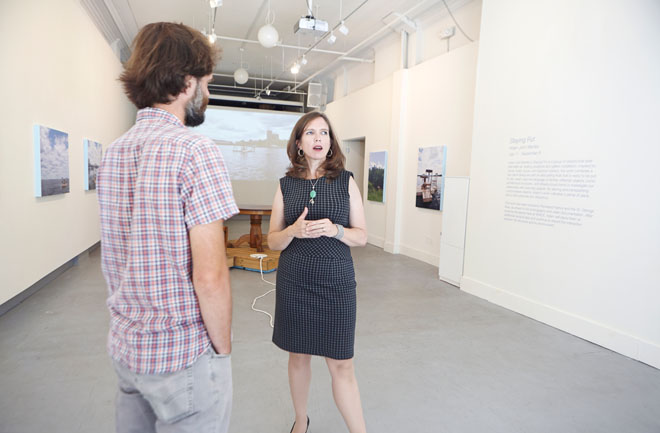 Hutchins keeps a finger on the pulse of the arts and economy, participating as a board member of the Greater Portland Economic Development Corporation and the Greater Portland Convention and Visitors Bureau, and meeting with directors of arts and music organizations, like Nat May of SPACE Gallery. 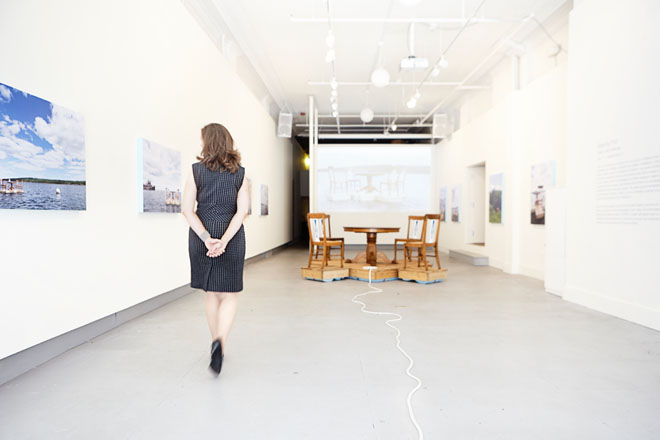 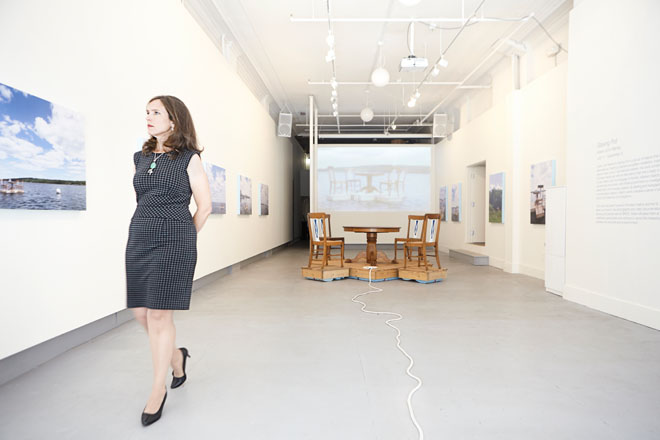 The Creative Portland Executive Director Dreams of Upending How we Value Art.

It is one of those brilliantly colorful days in Portland. Commercial Street is swelling with end-of-summer restlessness. Lines jut out of restaurants, lobster shacks, and cafes. Cars carrying kayaks and bikes nudge up against the stream of traffic. On Monument Square, a tank-topped busker belts out bluegrass on his guitar. And at a nearby coffee shop, posters advertise various concerts and events, like the upcoming Picnic Music and Arts Festival.

Summer is winding down, but a palpable energy hangs in the air. I like to think of it as creative buzz, ignited by all of Portland’s wildly imaginative residents plugging away at their arts—painting, sculpting, writing, performing, curating, programming, building. Increasingly, Portland is becoming visible as a city that produces and invites talent, innovation, and creativity. In recent years, many of Portland’s public officials and commercial leaders have made a concerted effort to support the arts and culture sector and the creative economy in general. Central to this cause is Jennifer Hutchins, the executive director of Creative Portland.

When I arrive at Borealis Bakery and Bistro, Hutchins is already settled in at one of the outdoor seats, coffee in hand, briefcase resting at the foot of the table. She has been dashing from one meeting to another, and although ours is one of many lined up for the day, she greets me with ease and attention, as though she has all the time in the world.

Her face is framed by chestnut-colored hair that is neatly tucked behind her ears, and she sits, poised, in a sleeveless, summery business dress, exuding the kind of ineffable grace I’ve noticed in some musicians. It doesn’t surprise me when she tells me she trained as a soprano from high school through her 20s, learning Italian arias and classic solos, and traveling to Russia with the Choral Arts Society of Washington and the National Symphony Orchestra.

While Hutchins eventually decided that singing professionally wasn’t her path, her passion for the arts has continued to drive her work at Creative Portland, a nonprofit founded in 2008 by the Portland City Council and charged with the task of growing and supporting the city’s creative economy. Its “big, hairy goal,” as described by founder and former president Andy Graham, has been to attract 10,000 creative-minded people to Portland within 10 years. Why? Because creative-minded people buy art, support theater, donate to museums, and purchase tickets to concerts. In short, they will help sustain Portland’s arts and culture. Recently Creative Portland has shifted its focus to not just attracting people, but also encouraging their engagement in the creative community.

Creative Portland currently has several initiatives directed toward achieving these goals. Its LiveWork Portland website acts as one big advertisement for the city, showcasing it as more than just a place to vacation, but one where the quality of life and culture make it a great place to live. The website features written and video profiles of creative professionals, and through its 2 Degrees Portland project, connects those interested in moving to Portland with those who live and work here, and can talk about their experiences. Networking events for 2 Degrees are held at creative businesses such as Running with Scissors, VIA, and Portland Museum of Art.

Hutchins is most proud of this program, whose database of 2 Degrees connectors includes working professionals ranging from people in the technology industry to those who work in health or publishing. There are engineers and painters, ballet dancers and software developers. It is a wide network that brings about a cross pollination of ideas.

“It’s unlike any other networking platform and it really gives those who are curious about life in Portland a real connection to the energy and the excitement of the people who live here,” she says. “We have couples, young twentysomethings, and working professionals call us from all over the country—Brooklyn, Austin, California— and we try to match them with a 2 Degrees connector who can offer useful insight.”

While the focus of Creative Portland is to support and boost the city’s creative economy, a byproduct of all of their efforts is that communities are strengthened, networks are created, partnerships and collaborations arise, and two-degree connections become one-degree friendships.

Creative Portland also produces the First Friday Art Walk series, which spans more than 60 art venues along the peninsula, and encourages engagement and dialogue among residents, galleries, and artists. October marked the fourteenth year of First Friday Art Walk, and attendance is estimated at 3,000 to 5,000 each month. “In our increasingly virtual social world, I believe that the desire for in-person connection is also increasing,” says Hutchins. “The Art Walk is a grassroots community experience that reminds people of why we love to live and work here—art and culture, relaxed pace, neighbors.”

But it isn’t enough to draw people here— there needs to be infrastructure and leadership around a united vision of Portland as a thriving creative city. Hutchins cites leaders who are making large, broad strokes in the galvanization of the cultural community—Portland Museum of Art’s Mark Bessire, MECA’s Don Tuski, Portland Ovations’s Aimée Petrin, Space Gallery’s Nat May, and Portland Stage Company’s Anita Stewart among them.

“We’ve started attracting people here and people understand the economic value of having a strong creative community,” she says. “But I’m not satisfied with just that. I really want to get us back to establishing arts and culture as a community value—art for art’s sake—more than being an economic value. I think of President John F. Kennedy in his support of the arts, and in the basic question set out by his efforts, which was, ‘Can you imagine a world without art?’”

Hutchins sits on the boards of the Greater Portland Economic Development Corporation and the Greater Portland Convention and Visitors Bureau. Both, she says, are relevant to her work at Creative Portland because they are implementing strategies intended to strengthen the regional economy, either collaboratively by linking public and private efforts or by serving the tourism industry.

“In all of our interactions with our partners and our own planning for the programs we pursue, we prioritize Portlanders by first asking how we can enrich the community without jeopardizing what we love about it, including our enviable ‘cultural density,’” Hutchins explains.

When she talks of change, she is talking about Portland, but she is also talking about upending society’s overall view of the arts as leisure. You can hear the sense of urgency and passion in her voice. “It’s a huge task. I realize these are just my ideas and I’m just this one person, and part of me gets a little intimidated by my ideas sometimes because I think to myself, if the Americans for the Arts [the venerable national nonprofit] can’t figure this out, who am I? At the same time, especially in the United States, some of the biggest changes have been ignited by small scale movements.”

Hutchins was peripatetic in her youth–after high school in Brunswick, she studied political science and French at Union College in Schenectady, New York, and moved on to teach English in France for a few years. Afterwards, she spent some time in Washington, D.C., working for nonprofits. After some time traveling in Africa, Hutchins found herself back in Maine, first in the marketing department at the Portland Stage Company, and then at the University of Southern Maine’s Muskie School, where she directed external affairs and communications while working on a master’s degree in public policy and management. While at the Muskie School, Hutchins was on a research team that authored a study of Maine’s creative economy, prepared for the New England Foundation for the Arts and Maine Arts Commission.

In a section of the study dedicated to the creative economy in small places (Portland, Bangor, Norway, and Dover-Foxcroft among them), Hutchins and co-author Deborah Smith outlined ten building blocks of the creative economy, and organized them into categories: assets, like creative people; connectors, like leadership; and enhancers, like money.

In their study of Portland, they cited several creative assets as critical in the city’s potential for having a thriving creative economy—the Maine College of Art, creative sector businesses filling previously empty storefronts, and a wide range of quality restaurants among them. But “without the necessary connectors (leadership, networks, and strategies) to tap into Portland’s potential enhancers (time and money), the question becomes, how long can the city’s creative economy sustain itself ? What potential development is the city passing up?”

In a broad sense, the spirit of this inquiry has defined Hutchins’s career. But in recent years, Hutchins’s work has taken on a new, more personal element: “I want my daughters to live in a society and a community that places equal value on imagination and adventurousness in creativity as it does in physical adventurousness,” she says.

To move toward this goal, Hutchins draws inspiration from parents who have taken matters into their own hands and have begun offering their own form of arts education. Writer and former Telling Room director Gibson Fay-LeBlanc, whose children attend the same school as Hutchins’s daughters, applied for and received a grant from the Maine Arts Commission, which helped to produce a series of arts programs run by fellow parents—themselves artists and professionals. The school has since hosted a performance residency, regular visits from performing bands and musicians, and, among other things, the creation of a literary journal, run by Fay-LeBlanc.

“There are other people out there who value the arts and value creative education for their kids, so there’s a lot to build on,” she says. “But what’s clear to me is that there is still work to be done. How do we get there? This question is what motivates me.The way I see it,my role is to do what I can to support the people who are creating all forms of art. It’s a role that I feel really good about and that feeds me.”

She adds, “Because I don’t ever want to imagine a world without the arts.”