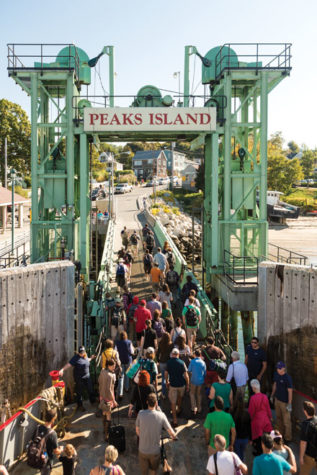 To get to Peaks Island, most pass over the mint-green transfer bridge at Forest City Landing. The structure, erected in the 1990s to replace a smaller bridge, is a passageway to 740 acres of island calm. But Peaks is hardly insular: in the warmer months, 17 ferries travel the 20 minutes between the landing and the Old Port daily. Many of the 900 or so year-round residents commute smoothly into Portland for work, and visitors can spend a few hours on the quiet Casco Bay island before heading back into the buzzing Old Port.

Peaks Island has long been an oasis for summer vacationers and daytrippers. Back in the late nineteenth century, steamships escorted passengers for a nickel to the island, where they might be vacationing for the weekend in a coastal cottage or perhaps catching that evening’s show at the Gem Theater. When the ferry arrived at Peaks, it released a flood of people onto the pier, where they were greeted with hot dog, ice cream, and popcorn stands.

Peaks is still an accessible island experience. Daytrippers have lunch at the Inn on Peaks Island, Cockeyed Gull, or Peaks Island House, and grab coffee and sweets at Peaks Cafe. Visitors also rent bikes at Brad and Wyatt’s Island Bike Service, kayaks from Maine Island Kayak, or golf carts at Mike’s Carts and tour the quieter side of the island before heading back on a quick ferry ride. In all its accessibility, there is still something special about passing over the bridge and into island living.