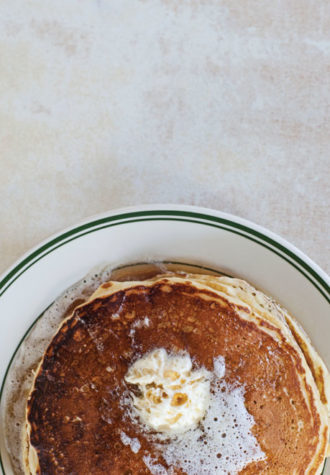 Buttermilk flapjacks are served with all the real Maine maple syrup you want, at no extra charge. 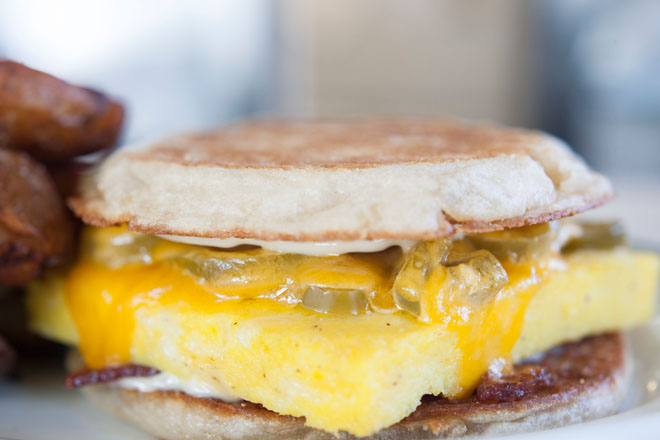 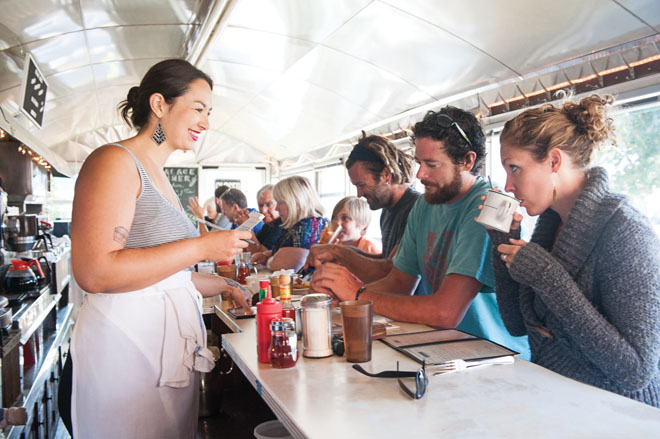 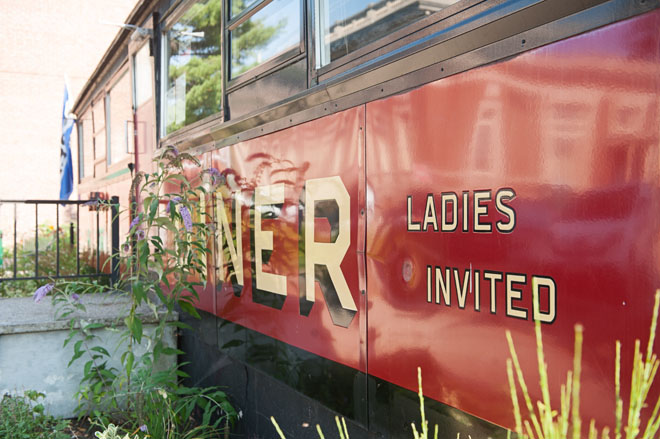 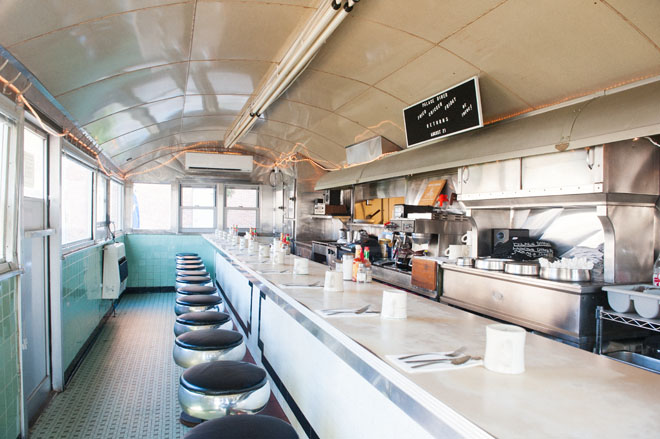 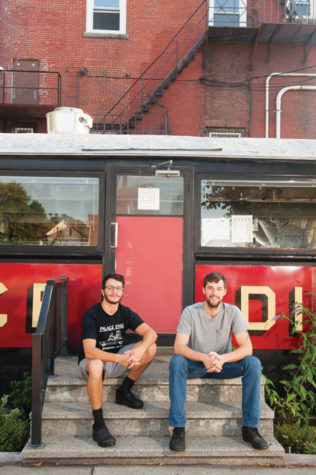 Greg Mitchell and Chad Conley are proud of what theyve established in Biddeford. When we saw this place, the light bulbs just went on for both of us, says Conley. 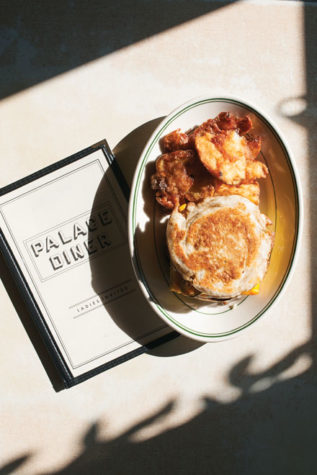 Early morning sun puts the spotlight on the Palace Diners Deluxe sandwich. Paired with the famous Palace Potatoes, its a filling breakfast or a hearty lunch. 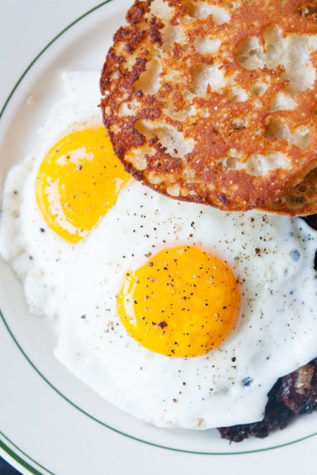 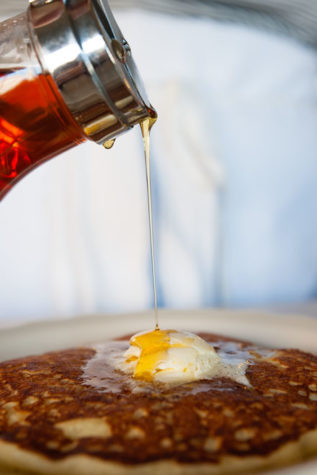 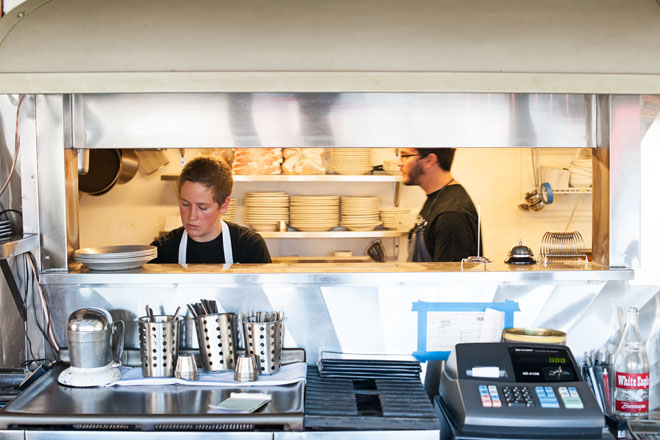 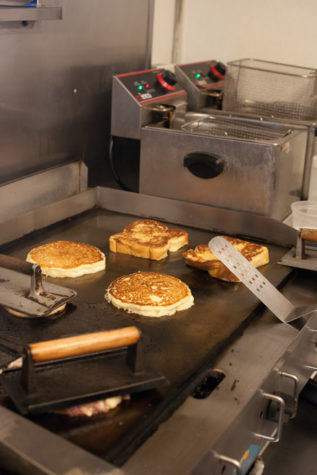 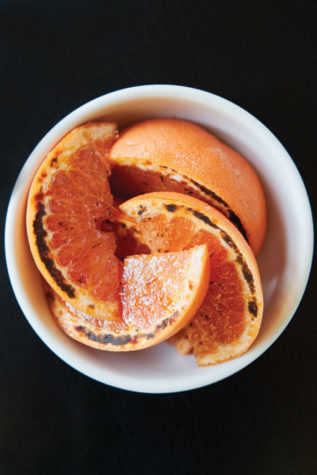 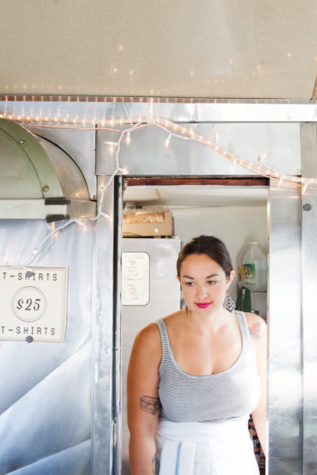 Sarah looks the part of an updated diner server with a shy smile and a warm way as she greets customers and pours coffee.

Back when the mill towns of Maine were bustling places staffed around the clock, hungry employees needed to be fed at all times of day. Diners were the original transportable lunch wagons and the answer for after-hours meals. They’d be parked outside when a mill worker finished his shift, and could be counted on for a hot, hearty, and inexpensive meal. The mills of Maine may have changed, but the diner concept is alive, well, and thriving at Palace Diner in Biddeford.

Just 15 stools line the worn counter. Stainless steel backsplashes, mint green tiled floors, and a sign on the side that reads “Ladies Invited” all harken back to a different era. The diner is one of only two barrel-roofed Pollard dining cars still in existence, which were built in Lowell, Massachusetts in 1927. The car was built specifically for Biddeford and has stood at several spots, all within a block of the current Franklin Street location, since then. Little of the style has changed, but the food certainly has, and that’s a very fortunate thing for Palace Diner patrons. The menu is purposefully small and concise, dictated by the size of the tiny kitchen and its lack of storage. ”We really had fun working within these parameters,” says co-owner and chef Chad Conley. ”The menu contains the very best of everything we felt we could do in a small space.”

Conley seems to enjoy a culinary challenge. After three years of working under chef Rob Evans at Duckfat and Hugo’s, Conley left Portland to explore cooking in other parts of the country. Stages at Chez Panisse in California and Daniel in New York City eventually led him to the high-powered kitchen of Jean-Georges Vongerichten. ”I deliberately chose a place at the top of its game; I wanted it to be high stakes. It was a lot pressure and I learned to be a better, more precise cook there, but I knew it wasnt an environment for the long term,” Conley explains. After two intense years, he landed at Four Season Farm in Blue Hill, eager to learn from Eliot Coleman what goes into growing the finest ingredients.

Greg Mitchell, now co-owner of Palace Diner, also followed a curiosity about farming and a love of fresh ingredients to the food-centric peninsula. Mitchell has worked in restaurants since high school, everywhere from upscale markets to bagel shops to the renowned Cowgirl Creamery in San Francisco. A position at Franny’s, a restaurant in Brooklyn, sparked his interest in understanding the source of his ingredients, and encouraged him to accept a chef friend’s invitation to spend time at Coleman’s Blue Hill farm. Mitchell eventually moved up the street to manage David’s Folly Farm in Brooksville, where he eventually hosted public farm dinners and other events.

The pair became friends during these years in Blue Hill, and often talked about restaurants from what kind they’d like to see in the Portland area to which ones they most admired and what they would do differently. Actually opening their own place was a pipe dream. After three years in Blue Hill, Mitchell went off to travel the world. When he returned, he and Conley decided the time was right to make that dream a reality. They searched Portland and struggled to find the right space. “Nothing felt inspired, so we decided to expand the geographical range,” says Conley. ”We came to Biddeford on a whim and within two hours we had met all the right people.” Once the two saw the diner, the original plan went out the window; they were going to learn to cook diner food. They tell this story in tandem, like an old married couple retelling the tale of their courtship. “We ate a lot of cheeseburgers,” admits Conley. “Even now, the editing and creating process never stops. We use customer feedback, take suggestions from our servers. We’re not afraid to take things off or add to the menu,” he says.

If the foundation of a diner is its hash and potatoes, then it’s no wonder Palace Diner has built such a strong reputation. ”The potatoes are the simplest thing we make, but they get the most recognition,” Mitchell tells me. The Palace potatoes are a carb- lover’s dream: blanched in seasoned water, then smashed, then fried. Smashing them increases the surface area so there will be more of the craggy fried bits and edges; still, the interior remains tender, a combination that makes the Palace potatoes a worthy indulgence.

”Every item has its own following,” Conley tells me when asked about a menu favorite. If that’s so, then the corned beef hash must have a very large fan base. The grass-fed brisket and short rib blend is brined for a full week before being braised overnight. It’s then mixed with Yukon Gold potatoes, onions, a little Dijon mustard, a touch of horseradish, and a bit of the braising liquid to bring it all together. Adding flavor at every step like this makes the final product savory and delicious. But wait, there’s more. The hash is then griddled, creating a luscious, crunchy crust. Order the hash as a base for your eggs along with a grilled English muffin, and all is right with the world, at least inside Palace Diner.

The Deluxe Sandwich is also a favorite. The chefs use a sandwich-sized English muffin, give it time on a buttery griddle, then pile on a fluffy square of baked eggs, cheddar cheese, bacon, pickled jalapenos, and a smear of mayo. Served with a side of the Palace potatoes, it’s decadent and completely worth it. It’s hard not to want one of everything when presented with the menu. The thick slices of challah French toast are eggy and buttery, the top piece lightly caramelized and served with all the real Maine maple syrup you can eat (no extra charge). There’s no regular dinner service, but every couple of weeks when the weather is fine, “Fried Chicken Friday” is held. The guys set up tables and chairs outside and a local brewery pours draft beer. If you’re lucky, there might be pie.

Last year, a staffer from Bon Appetit, who frequents Maine, happened to stop by. Not long after that, Conley and Mitchell received an email that is the stuff of young chefs’ dreams. It announced their nomination as one of America’s Best New Restaurants for 2014. Were they surprised by this national recognition? Yes and no. ”We knew we were doing everything right, executing at that level, but we didn’t know the right people were coming through here to see it,” says Conley. We did notice that our food was getting a lot exposure on Instagram though. Was the Bon Appetit selection based on the ethereal buttermilk flapjacks, for which the recipe now appears on the “Epicurious” website? Maybe. But it was no doubt that the tuna melt sealed the deal. It’s a simple diner classic for sure, but the Palace touch elevates it to new heights, literally. The traditional tuna mix of mayo, celery, celery salt, a little onion, and dill sits on a heaping stack of crisp iceberg lettuce. House-made bread and butter pickles are on top, and it’s all covered in cheddar cheese. It’s served on griddled challah bread, buttery and crisp, for a sandwich that can’t be overlooked by national food media.

“This place lets people know what were capable of. We love this place,” Mitchell says proudly, Conley nodding in agreement. Without a doubt, many people feel the same.