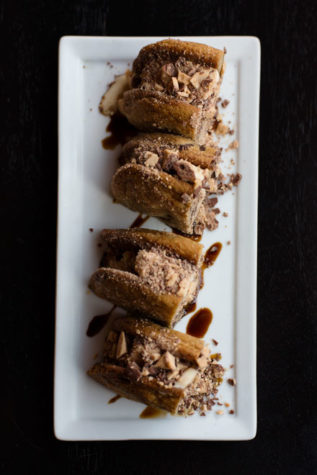 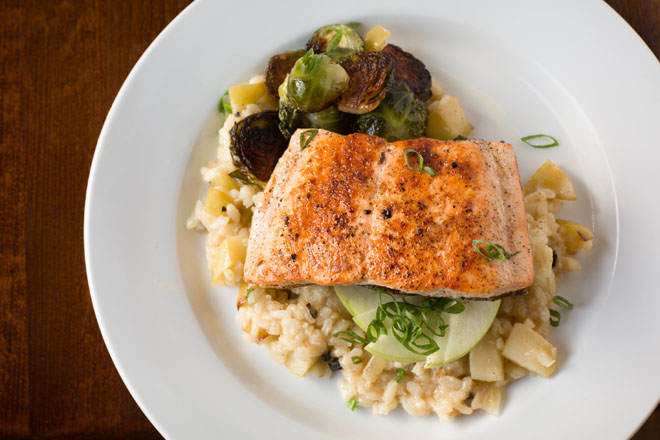 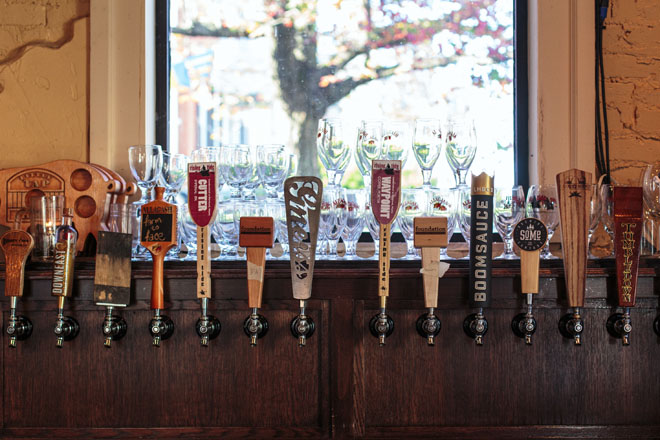 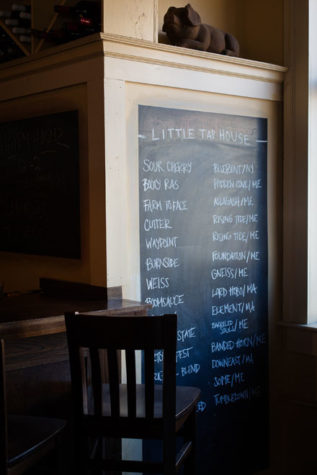 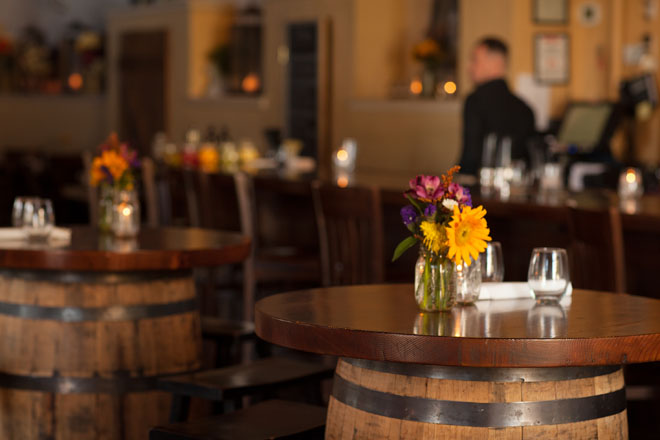 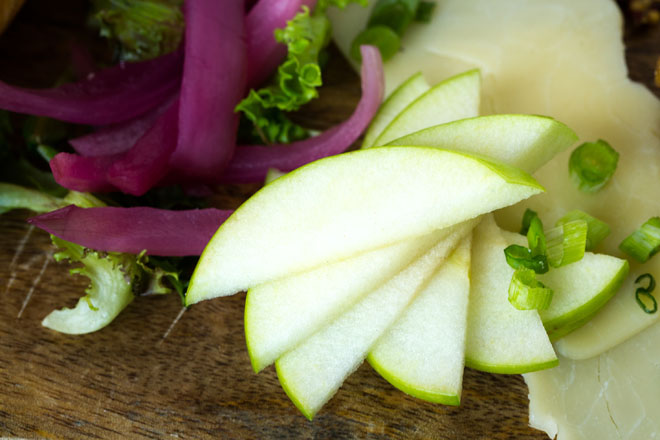 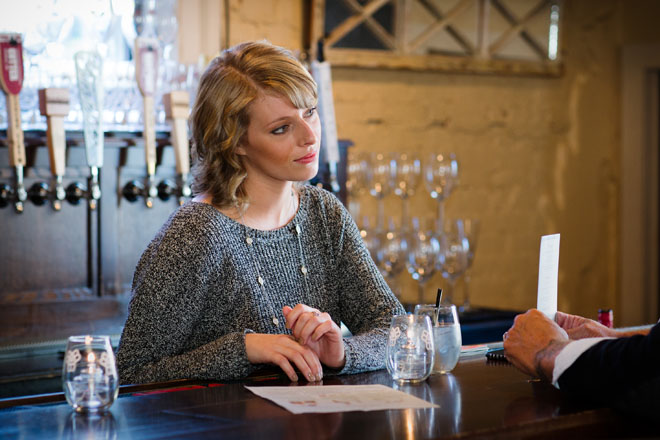 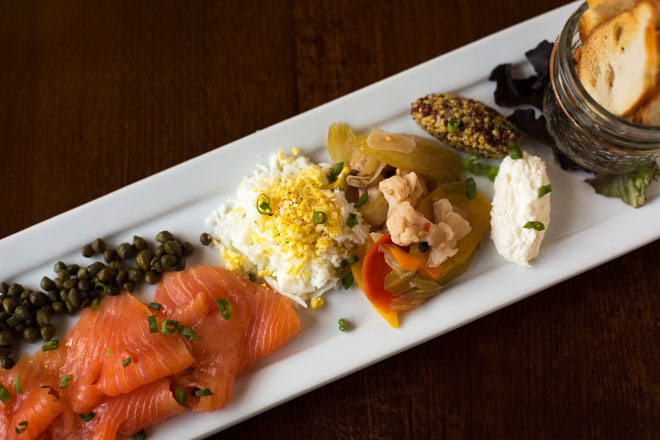 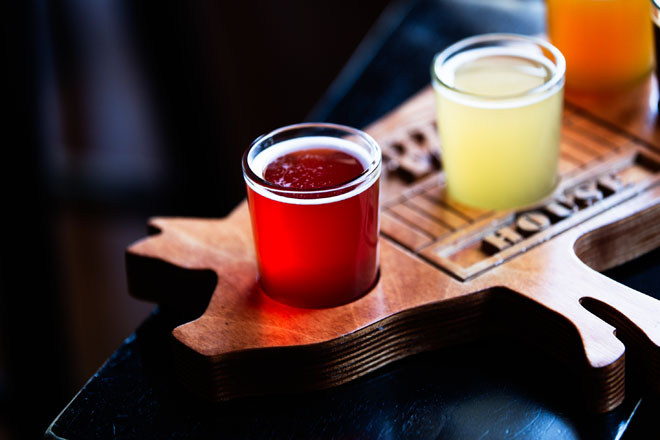 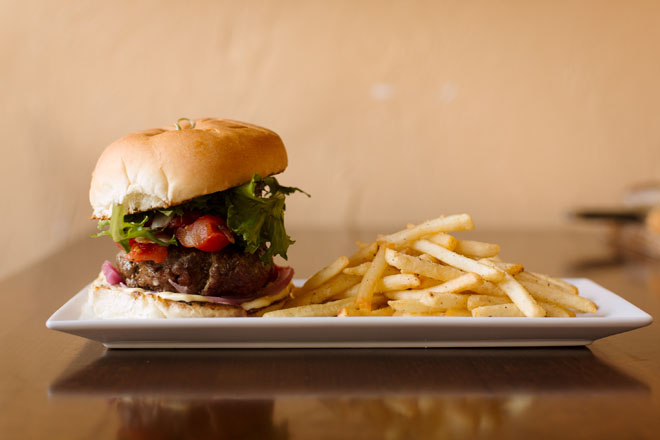 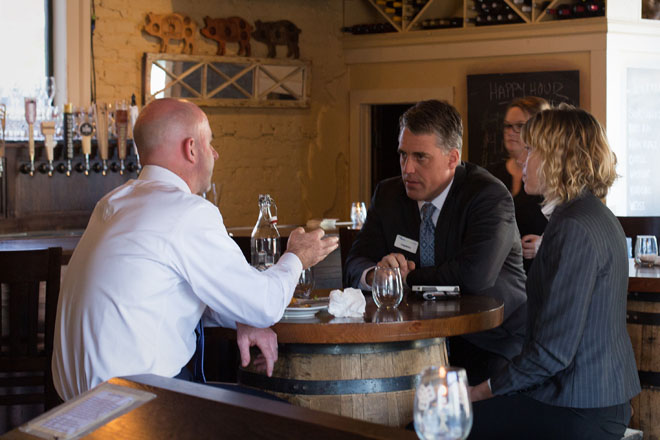 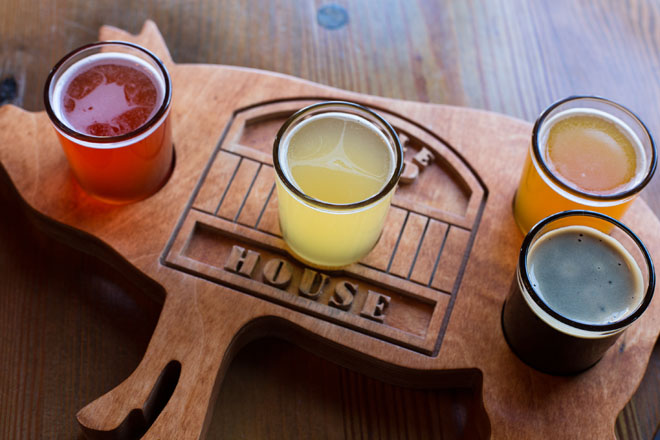 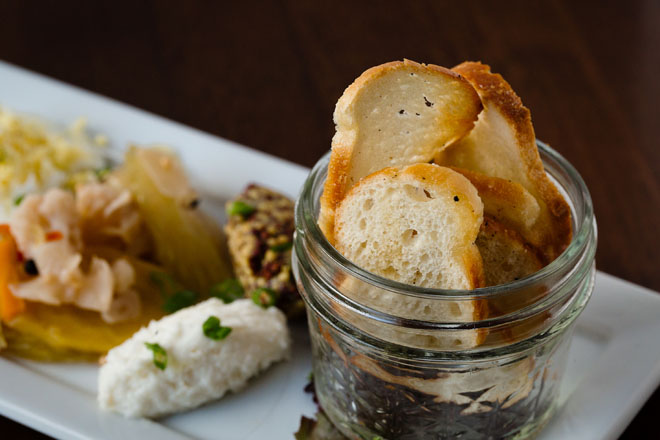 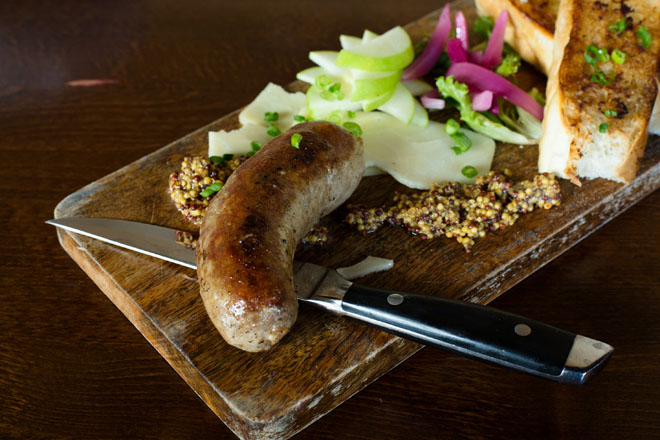 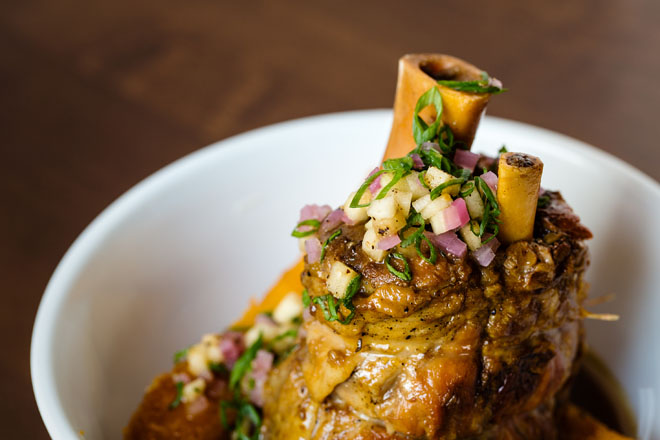 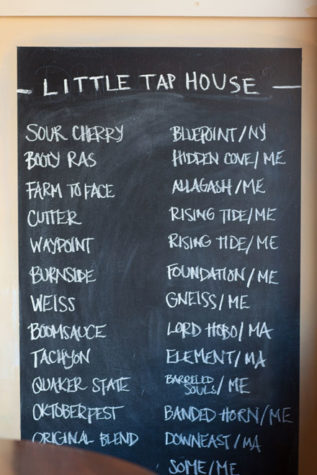 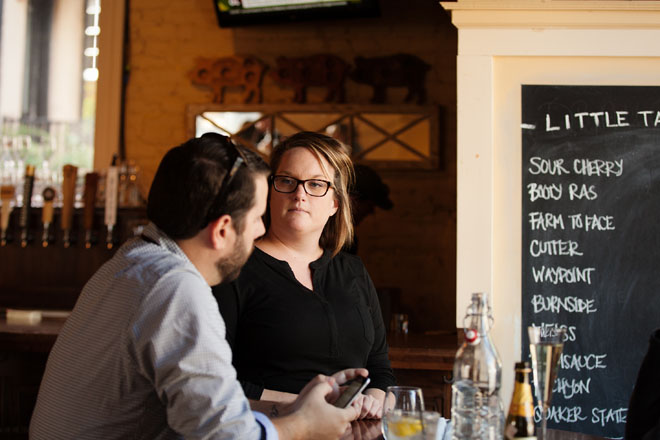 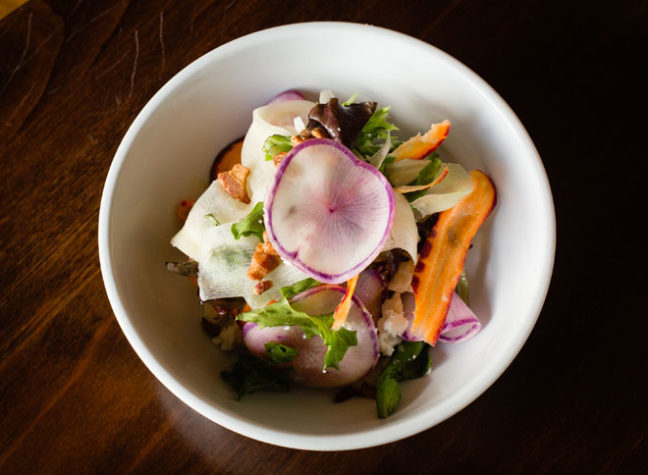 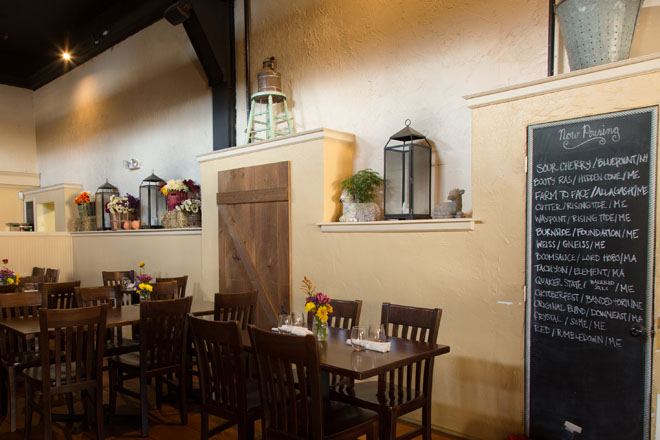 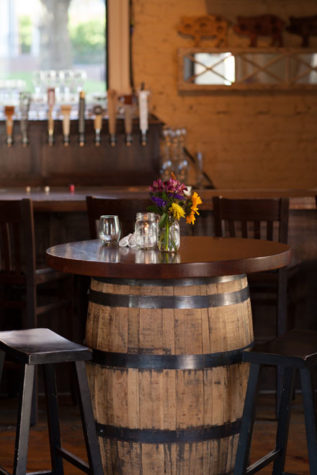 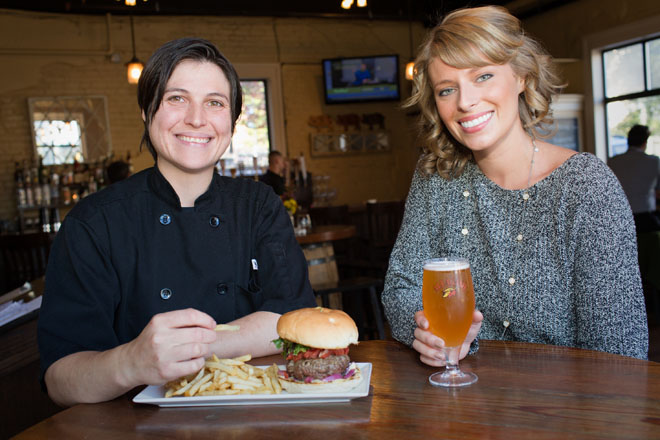 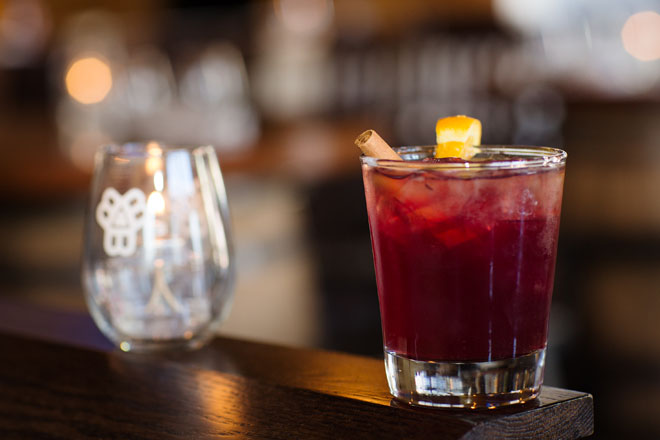 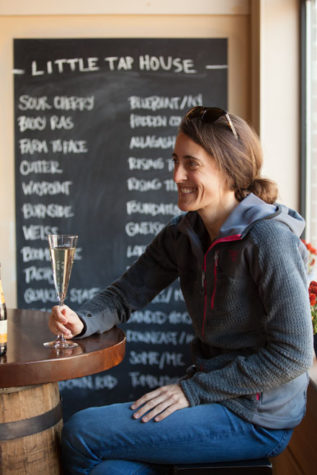 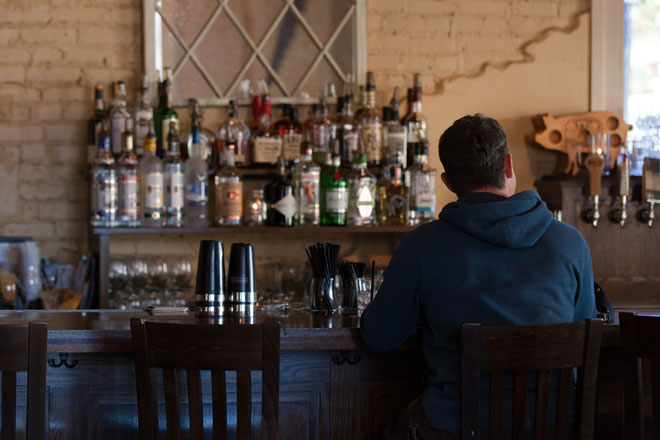 For the thousands of times I have sped up High Street past Little Tap House, dismissing it as merely a bar, a thousand apologies. How could I have known that this unassuming corner was so much more? Of course, Little Tap House has a bar with 14 rotating beer taps, beer flights, and high-top tables made from Allagash beer barrels. But above and beyond that, Little Tap House is a undeniably a restaurant, with the kind of food that shatters misplaced assumptions.

There is a certain rusticity to the room with its time-scarred floors and painted brick walls. But there’s plenty of light flowing in through big windows and the casual ambiance is inviting. The kitchen is under the leadership of Kelli Thompson. The chef came to Maine seven years ago, first working alongside Little Tap House owner Lee Goyette at Thornton’s Bar and Grille in South Portland. She later honed her skills at the Corner Room and the Front Room, then made the move to Little Tap Room last November where she was happy to work again with Goyette and her daughter and co-owner Brianna Jaro. Thompson is young and creative, passionate about her craft, and excited to explain the new fall menu to me. It’s varied and appealing, from perennial favorites such as the Tap House burger and beer tempura fish and chips to new seasonal items like the cider-braised pork shank. “Every piece of meat and produce gets the utmost care,” she tells me. “It’s all cooked to order. We want every dish that goes out to be spot-on perfect.”

That big and meaty pork shank proves her point. It’s a play on classic osso bucco, where instead of soft polenta, you get hearty crisp polenta fries that soak up the savory sauce. A pickled apple gremolta is a surprising and delicious twist on tradition, too. The tender meat easily falls away from the bone. A beautifully spiced piece of salmon gets special treatment paired with apple-sage risotto and everyone’s seasonal favorite—roasted Brussels sprouts. The “Shares” section of the menu are all popular choices. “It’s all about indulgence here,” says Thompson. “Treat yourself.” The poutine is a celebration of that sentiment with 12-hour braised beef, Pineland Farms cheese curds, and rich gravy over fries. Other shareable plates include mussels in a beer and smoked shrimp broth, cheese or house-made sausage boards, and three types of wings.

Sous-chef Dan Letendre is known for his extensive beer knowledge and is an award-winning home brewer. Sauces and accompaniments are all made in-house, very often using one of the on-tap beers. Letendre makes vinaigrette from gose, an old-style German beer, and it is poured over roasted beet salad. Each batch of the beer-barbecue sauce is made using a different brew. Even dessert gets the beer treatment with stout ice cream packed inside a house-made chocolate chip cookie with toffee crumble.

Jaro curates the beer list, which is Maine-centric, changes often, and stands by the motto, “Drink fresh, drink local.” You can order beer flights to taste and compare four varieties at a time. Happy hour goes by the name of Bar & Barrel and features a different beer each weekday from 4 to 7 p.m., which is paired with a snack from the kitchen (all for $5). The occasional Tap Takeover events highlight a special release from a local brewery, often with the brewer on hand. But it’s not all beer at Little Tap House. Day manager Emily Maro, has crafted a sweet-and-spicy harvest sangria of red wine, spiced rum, orange, and cinnamon. It’s a delightful sip of fall flavors, as is the maple old-fashioned.

Jaro brings a young vibrancy to Little Tap House. She’s full of ideas for events and ways to constantly improve the restaurant. With her energetic staff, she makes both regulars and first-time visitors feel at home. Little Tap House’s location, just a block off Congress Street, around the corner from both the Portland Museum of Art and the State Theatre, invites those looking for something special just a little off the beaten path. West Enders appreciate the sense of community that Jaro fosters here. In the summer, sidewalk tables fill up fast with patrons often bringing their dogs along. In the snowy heart of winter, Little Tap House is a neighborhood gathering spot, perfect for watching the storm, mingling with old and new friends and enjoying the bountiful food.

The moral of the story: do not judge that place on the corner until you’ve been inside. You might never know what you’re missing. Mea culpa.