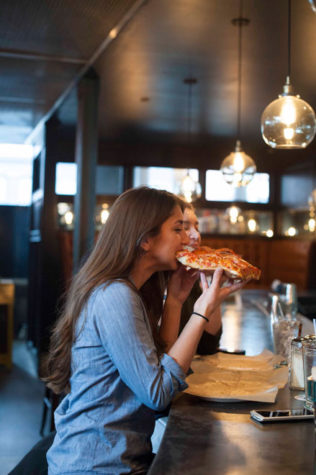 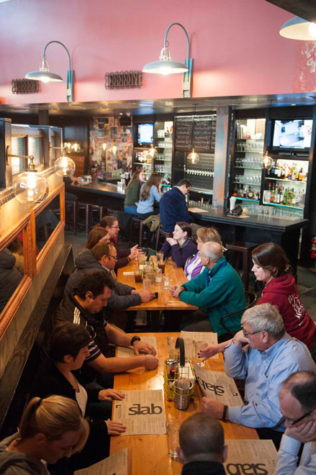 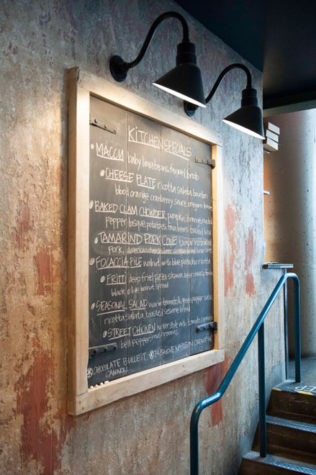 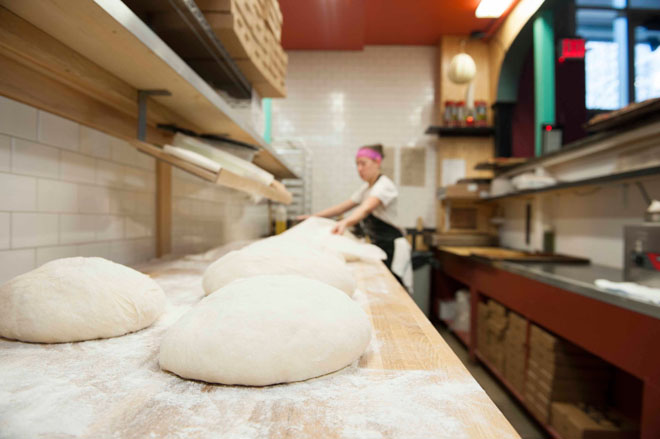 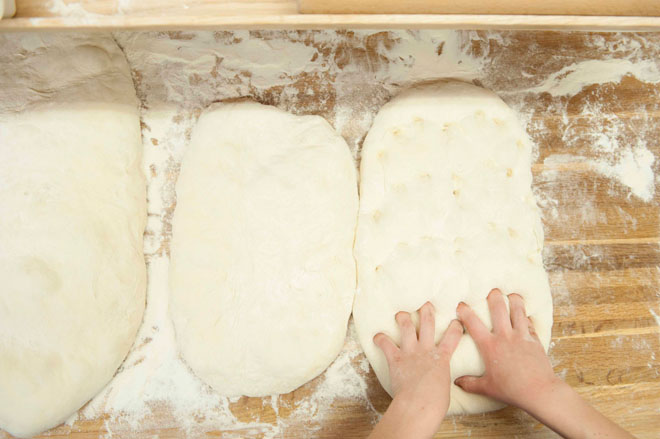 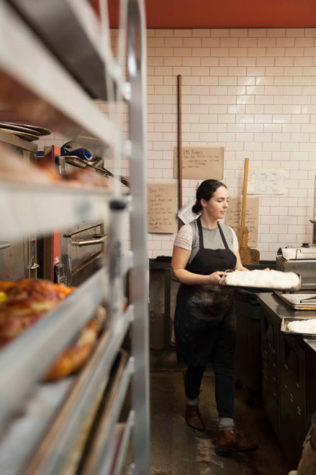 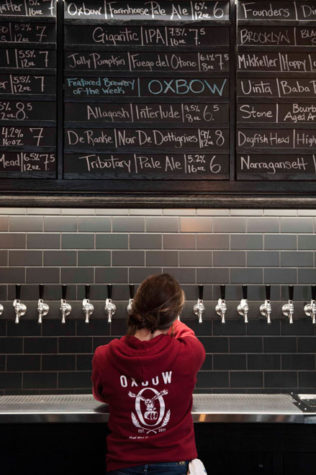 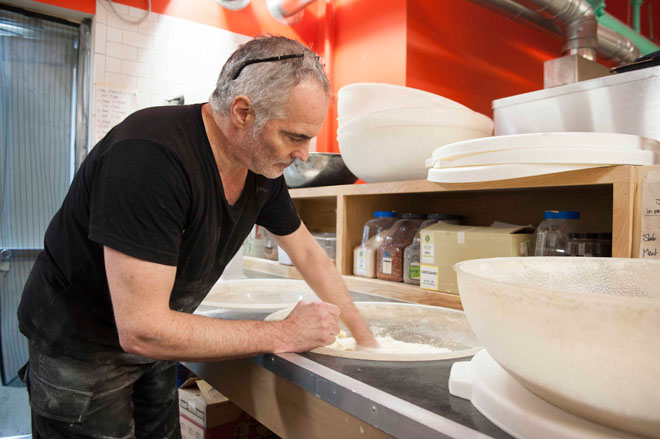 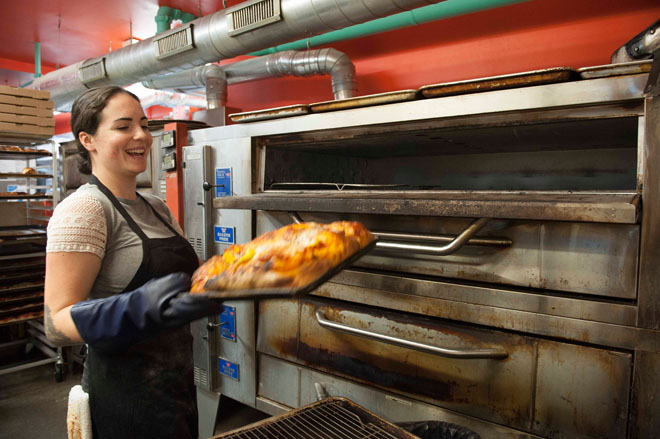 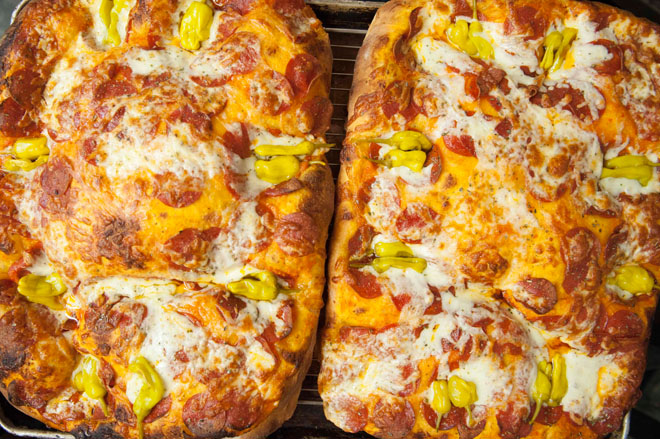 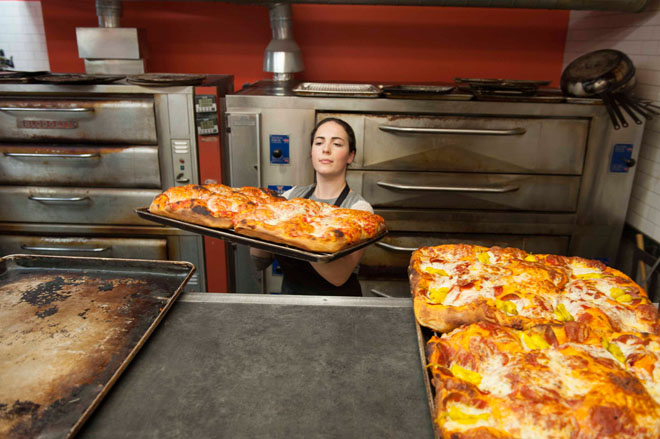 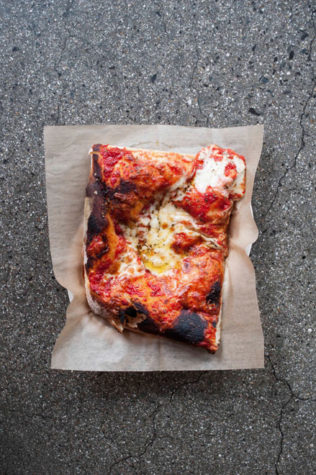 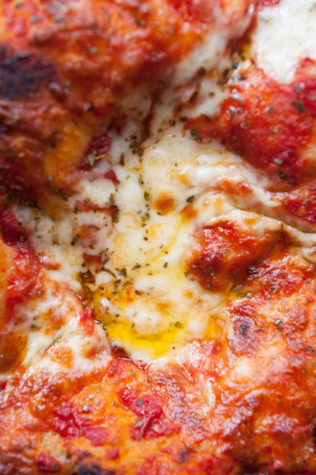 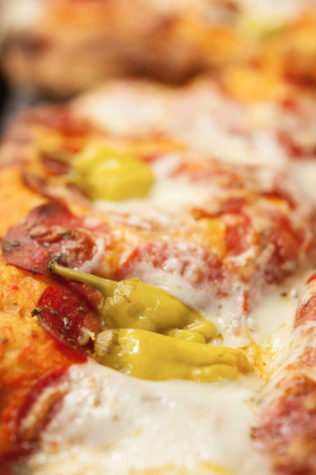 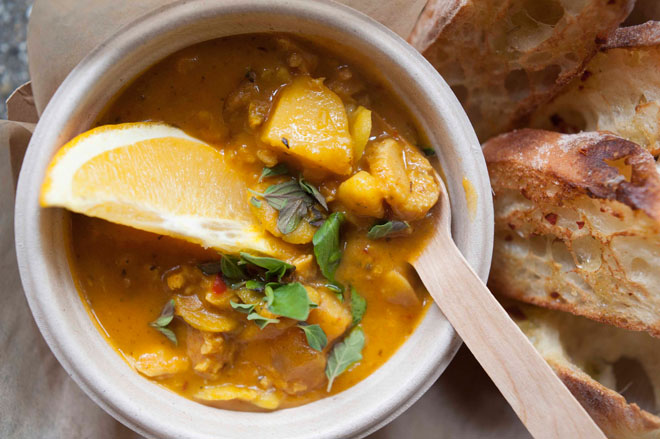 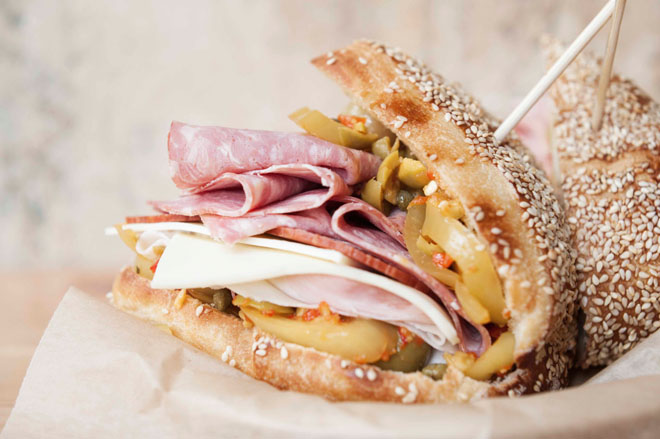 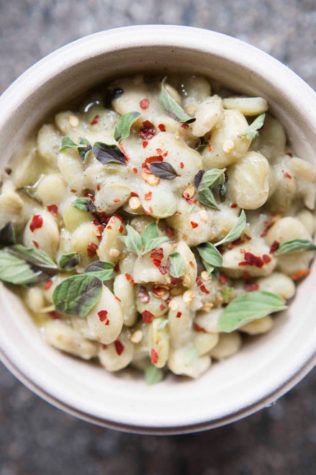 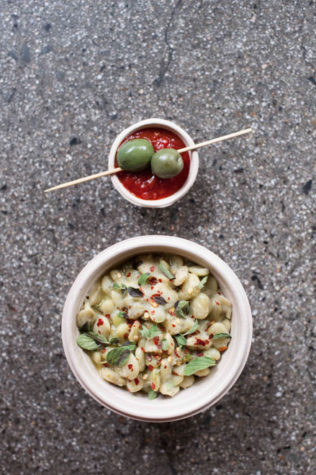 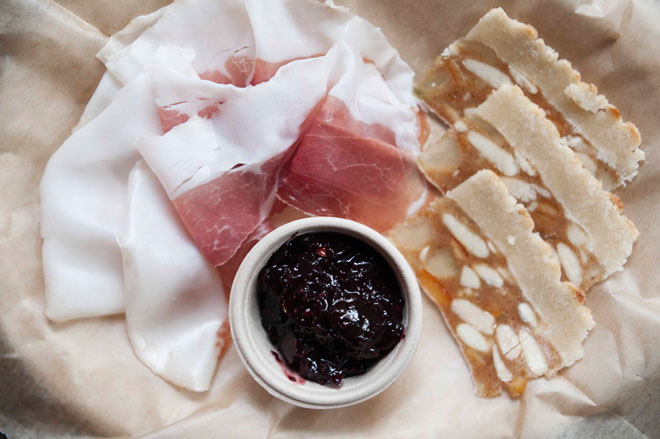 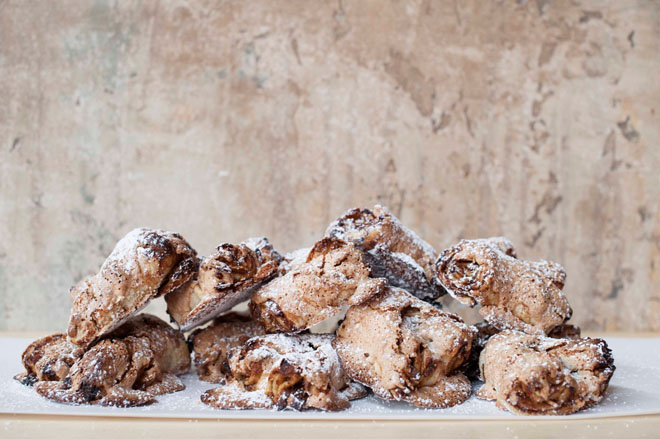 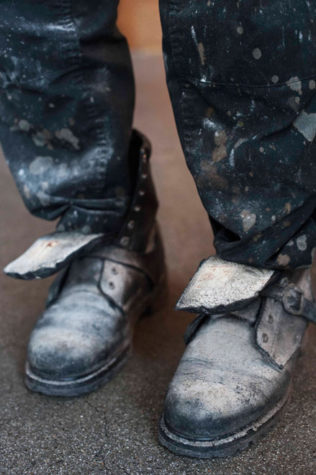 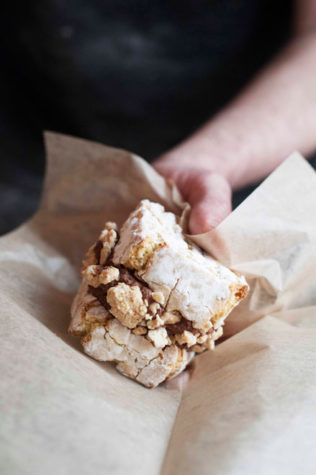 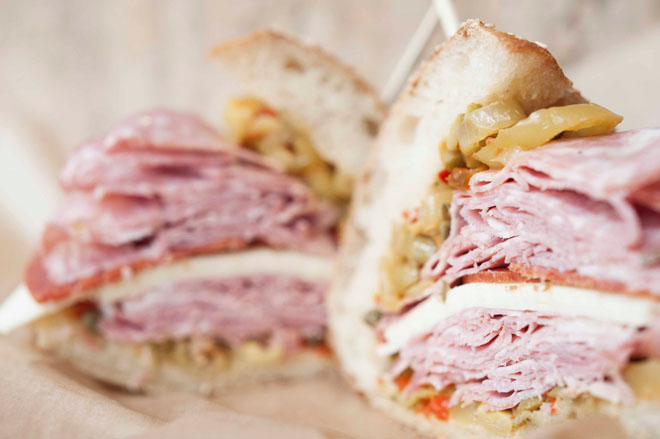 For years, hungry patrons stood in line in the back of Micucci’s waiting for Stephen Lanzalotta to serve the thick pizza slices from a window in the tiny kitchen. If you were lucky enough to get a slice right out of the oven, you might stand right there at the counter to eat it, wiping sweet tomato sauce from your chin, not at all afraid to burn the roof of your mouth with the molten cheese. Others would opt to take the slice to their cars to enjoy the crisp edge and pillowy interior in private, unwilling to wait to get back to the office or home.

A year and a half ago, Lanzalotta along with other investors opened the restaurant Slab on Preble Street. The space is in a corner of the old Portland Public Market with soaring ceilings, aged cement walls, and a variety of seating options, including booths, benches, and a long bar. “When we saw this space our jaws dropped,” says Lanzalotta. Outside the enormous windows is a tree-lined courtyard that in warmer months is filled with long farm tables, tripling the restaurant’s capacity.

Lanzalotta greets us in his uniform of black jeans and black t-shirt, completely covered in a fine dusting of flour, right down to his untied black moto boots. He’s incredibly enthusiastic about Slab and the menu he’s developed, which is full of Sicilian street-food specialties. “The food there is really different than the mainland,” he says. “Its cuisine has the influences of North Africa, Persia, and the Sephardic Jews of Spain.” His goal at Slab is to incorporate the spices and flavors from those regions into food Mainers are more familiar with. A bowl of baked clam chowder gets right to the point. Its warm orange hue looks nothing like traditional New England clam chowder. The color comes from a base of pumpkin and roasted red pepper puree without a drop of cream. The hearty chowder holds loads of chopped clams, roasted potatoes, and fava beans. Soup changes monthly and he’s planning on lentil soup for January. “Lentils mean abundance,” he explains. “In the new year, Italians gift each other with bags of lentils, which symbolize a purse full of money.”

The soup is served with grilled slices of Lanzalotta’s famous Luna Bread. You could say that this bread is the foundation that Slab is built upon. He created the feather-light but chewy bread many years ago at his first bakery in downeast Maine. “I was working towards a bread with an Italian influence that would go great with seafood. Once I got it right, it became the base for so many dishes,” he says. The half-moon shaped bread has amazing versatility and takes many forms on the menu. Of course, it’s the base for that legendary thick slab pizza, but also for the 32-inch-long thin-crust pie. The Luna becomes a sesame roll for the enormous muffuletta sandwich, crammed with Italian meats, cheese, an olive pickled pepper salad, and minced garlic spread known as “vampire repellant.” Lanzalotta has even figured out a way to make a piece of the bread into cone, deep-frying it in a beer batter, and using it to cradle tamarind-braised pork with beer cheese. “I’m always thinking of new ways for the food to be more exciting, more varied, and novel,” he says. Another example of his creativity is the prosciutto pairing. This little snack changes with the season and is both savory and sweet. A few slices of smoked prosciutto on one side of the plate are mirrored on the other side with a few thin slices of sweet panforte fiorito, almond paste, nuts, and candied orange. With a little accompaniment of Bing cherry mostarda, it’s a very clever and tasty presentation.

Since Lanzalotta was first a baker by trade, desserts at Slab are worth saving room for. The warm-from-the-oven bucciddati is a flaky puff pastry filled with figs, nuts, and exotic spices. The chef has added some almond meringue around the outside for crunch and the combination of all the flavors and textures is divine. There’s cannoli, too, with fillings that change monthly. Right now you can fill the crisp pastry with chocolate bourbon ricotta mousse and white chocolate lava rock crunch. And don’t miss Lanzalotta’s trademarked Frozzoli Dessert Burger—two meringue cookies sandwiching semifreddo.

You may come to Slab for its namesake one-pound piece of pizza, but there’s so much more here you’ll be tempted by. Whatever you choose, there’s absolutely no chance you’ll go home hungry.