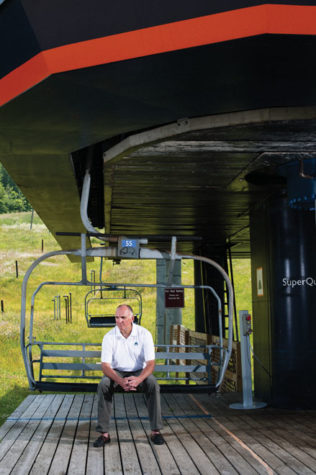 Karl Strand may be quiet and unas- suming, in the words of his good friend John Diller, but hes also very bright and very focused. Hes been coming to Sugarloaf for decades, and he loves the mountain like few others.

Sugarloaf’s new president and general manager Karl Strand opens up about his first few weeks on the job, his relationship with John Diller, and his goal going forward.

Karl Strand’s first week on the job was far more difficult than the dedicated Sugarloafer had ever imagined. In April 2015, the new president and general manager “walked into a firestorm” of media attention. The cause for concern was an accident—a “rollback”—that occurred in March on the King Pine lift and left several skiers injured.

Some of the safety mechanisms that were designed to prevent a rollback did not work as intended, allowing the steel haul rope and the attached chairs to travel in reverse. It’s a dangerous issue, but not an unfamiliar one for ski resorts. “Rollbacks are a big fear in the ski industry because it’s the one thing you never want to have happen,” Strand says. When I interview him, it’s been four months since the accident and Sugarloaf is in the midst of a safety reevaluation that will take all summer. It’s the beginning of July and we’re meeting in Strand’s office. Out the window, the mountain looms, trails green and grassy in the midday light. But Stand doesn’t seem to be tempted by the lazy summer day beckoning outside. He’s too concerned with winter and the influx of visitors it brings, each one looking for a scenic ride up the mountain. Calm and composed, he may be sitting in this office, but it’s clear that his mind is out there on the lifts, imagining them caked with ice, dusted with snow. Tools of leisure; instruments of danger and risk.

“Safety is our mantra right now,” he says when asked about his current focus. The resort has been updating their chairlifts, making sure that every single one either “meets or exceeds” current industry standards for safety. Strand and his team are also working to create a website that will educate skiers and snowboarders about lift safety and maintenance. “We want people to know how we make the lifts safe,” he says, “which means informing them on how lift operators do their jobs, what safety checklists we use, and what they can do, as riders, to have the safest experience possible.” He hopes that these outreach efforts will not only help dispel any lingering concerns about safety at Sugarloaf, but also increase preventative measures (and public communication) across the board for the entire industry.

There is never truly a silver lining to an accident like this, but it is possible to turn difficult times into learning experiences, and Strand has learned a lot from the rollback. It has also given him a renewed appreciation for the skiers and snowboarders who patronize the resort. “The beginning of my tenure here was rough, but it also reminded me of something I learned long ago: Sugarloafers are so passionate about their mountain.” He’s seen this over and over in the faces that return, year after year, to vacation at Sugarloaf. In the immediate aftermath of the rollback, the staff at Sugarloaf sent out emails to 10,000 season pass holders asking for feedback. Out of that number, only two requested their money back. To Strand, that speaks volumes.

“Our skiers are loyal,” he says. He pauses for a moment, reflecting with characteristic thoughtfulness. “I’m loyal to this mountain, too.”

The soft-spoken father of three has been coming to Sugarloaf since the 1980s, lured to the mountain by a high school friend who had landed a job at the resort. Although Strand grew up in the pleasantly tame suburbs of Albany, New York, he has long been drawn to Maine’s rugged topography and unvarnished charm. Like many of us, he was introduced to Sugarloaf in the winter, when the mountain is stark white and deep blue (a quiet color palette that’s enlivened by boisterous teenagers in their loudly colored parkas and snow pants). Over the years, he came to love the mountain for all its seasons, returning year after year for rafting trips or golf excursions, summertime adventures and fall hikes.

Do I make it all sound like an outdoorsmen’s idyll, a fantasy life comprised of getaways and vacations? It’s not. The vacations are just a small part of the story. Most of it is about hard work.

A graduate of Bryant University, Strand began his career in business on Maui, where he worked for Westin Hotels. After a few years of island life, he returned to upstate New York to attend the Culinary Institute of America. “I wanted to learn more about how a restaurant works. I wanted to understand the back-of-the- house stuff,” he says. Next, he moved south to Manhattan, where he worked his way up the line to saucier at Le Cirque. “It’s an incredibly high-pressure environment,” he says, recalling this rather crazed time in his life. “I was putting in 70 hours a week, with maybe a single day off. In Manhattan, everyone jumps from restaurant to restaurant, learning from each place you go. There is always so much competition.”

But working in restaurants taught him skills that he would apply to his next job as vice president of operations at a now- defunct chain of gourmet food stores, and later to his position running the food and beverage programs at Sunday River. He learned how to keep a cool head. He learned how to communicate clearly and concisely. And most importantly, through all these career changes, he learned how a good team works together.

Now, as the president and general manager of Sugarloaf, he draws on all his interests and professional experience—in hospitality, dining, the outdoors, and business—to fill the shoes of John Diller, the former general manager who held the position for 16 years. “Diller was an icon—and a good friend,” he says. The two men have known each other for nearly 20 years, since Strand’s early trips to the mountain as a young man. He speaks of Diller with obvious fondness: “He’s laid-back and mellow, and I guess I am a little bit, too. Maybe that’s why we get along so well.” But he quickly shifts gears, turning the conversation back toward business and the tasks ahead of him. “Replacing John will be tough, and I knew that before I accepted the job,” he admits. “Walking into it with the lift incident helped me get up to speed a lot quicker than I would have otherwise.” Even with all his experience (Strand put in six years at Sugarloaf before receiving the recent promotion) managing a resort is a huge responsibility—particularly in a place like Carrabassett Valley.

“You don’t walk into this job thinking you are going to change a ton of things. People love the tradition here; they love the history,” says Strand. “I’d known Karl for almost 20 years,” says Diller of his friend and colleague. “I knew how well he worked with the team. I knew he was well rounded and had a background in food, beverage, lodging, hospitality, and mountain management. For me, hiring Strand as my replacement was a no-brainer.” Plus, Diller adds, Strand knew the management and understood how the different departments worked together. “He’s a quiet and unassuming guy,” Diller adds, “but he’s also very, very bright and naturally good with people.” Not only are there former presidents of the mountain hanging around, ready to give advice or stop by for a chat, but the entire local community is deeply invested in the mountain. This can be a wonderful thing—Strand knows he can always turn to fellow Sugarloafers for advice or counsel—but it also induces a certain amount of pressure.

Fortunately, much of the criticism Strand has received has been constructive. Often, opinions coming from a place of passion can feel aggressive, but Strand doesn’t see it that way. “Carrabassett Valley is a skier’s community. People here like each other; they work together, ski together, and support each other,” he says. While no one wants to see Sugarloaf change too much, even the most vocal critics realize that the resort must grow with the times. Going forward, that is Strand’s number one goal: to grow sustainably. “Sugarloaf is loved for a reason,” he says. “I wouldn’t want to change the dynamic or the DNA. I want to see Sugarloaf—and the local economy—grow, but I want it to grow with consistency, with a sense that it is still the same wonderful place it has always been.”