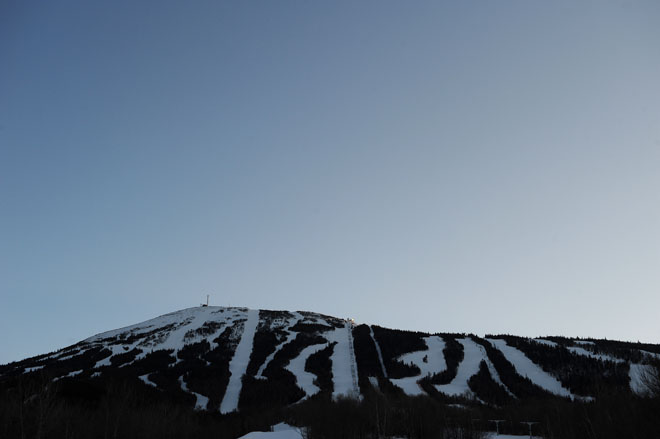 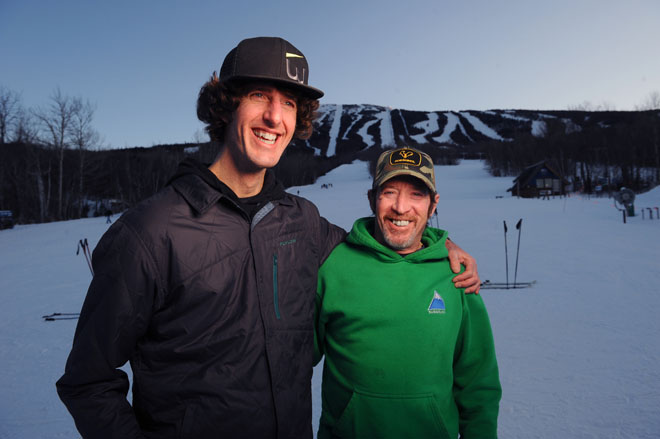 Were brothers from another mother, jokes Ash. He has been working alongside Putnam for years, and the two men have formed a strong bond. 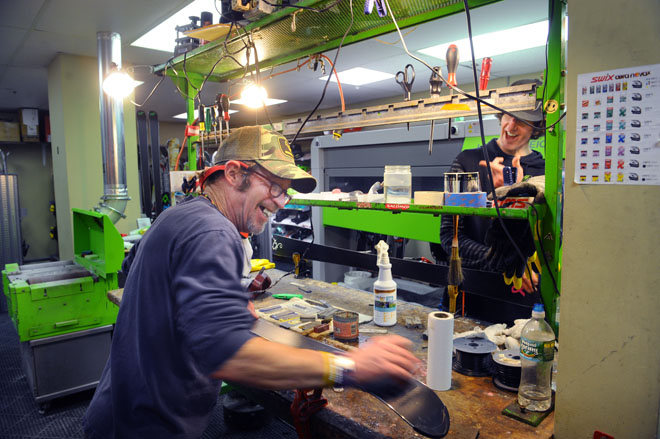 Behind the scenes in the ski shop, Bob Ash and Chris Putnam turn battered skis into things of beautywith a little help from their state-of-the-art equipment. 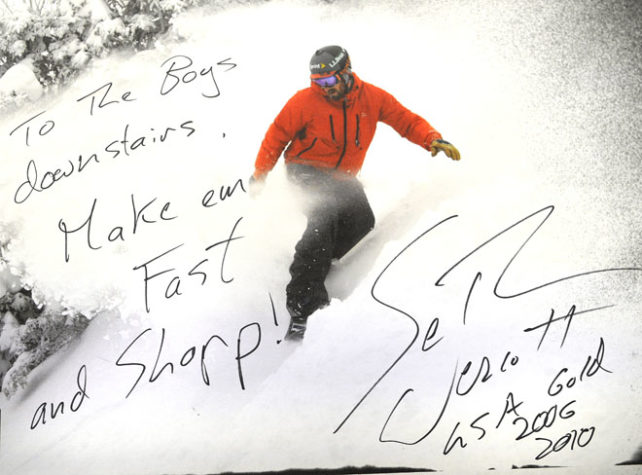 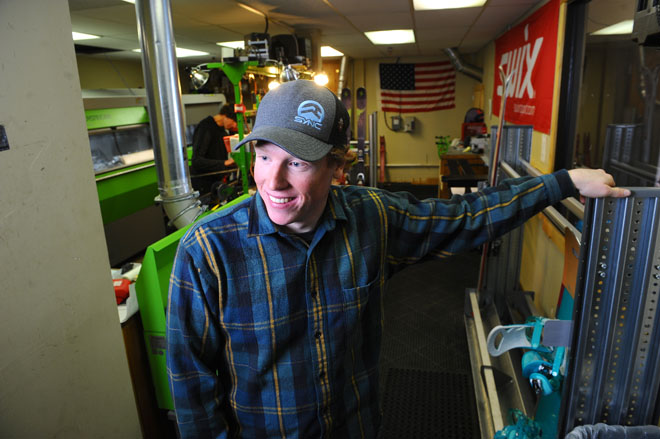 You go out on slow, un-tuned skis and its just so frustrating, says Sam Morse. Ash and Putnam, he says, do the behind-the-scenes work to make everything more enjoyable. 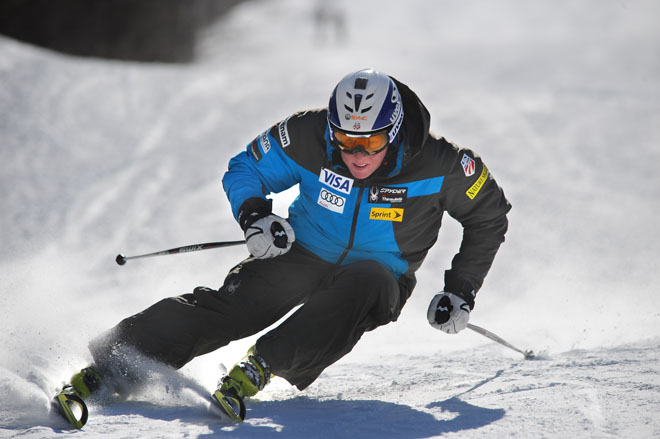 Sam Morse is a recent graduate of Carrabassett Valley Academy and a new member of the U.S. Ski Team. 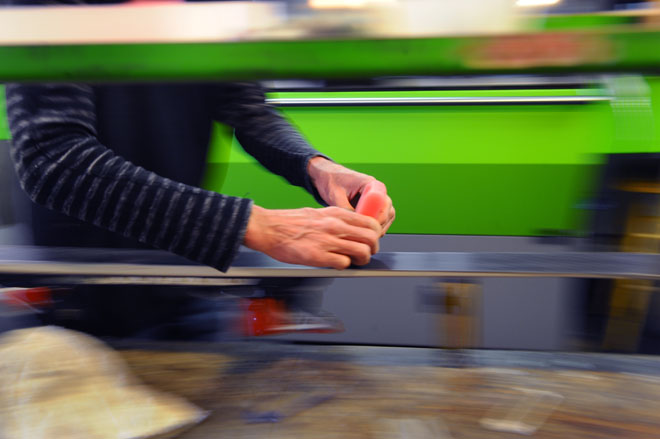 The lime green metal is a Wintersteiger ski service machine, which cost the mountain $200,000. But its worth it, according to Ash and Putnam. This high-tech piece of equipment makes their jobs easier and their work even more precise. T 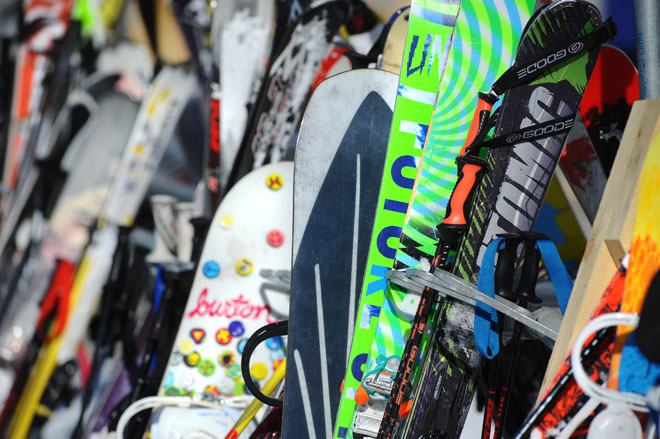 Snowboards stacked and waiting for a ride down the mountain.

A man’s workbench can tell you a lot about his character.

Chris Putnam and Bob Ash work at a big, lime green station. Stuck on the top of their bench is a sticker that reads, “Bro, Bra, Blah, Blah.” The table itself is scattered with tools and dotted with big pink globs of wax. It is cluttered and a little messy. A few pieces of metal sparkle. That’s not a word I thought I would use, but they do, because these tools are made with diamonds. In order to file the metal edges of skis to that precise edge, you need those strong stones with their nearly unbreakable carbon configuration.

“Your ears perked up at the word diamond, right?” asks Putnam. It’s true. Not because I particularly like diamonds—and certainly not because I’m the only woman in this room, as is gently, jokingly implied—but because it seemed at odds with the gritty, rough nature of this work.

It turns out that Putnam’s work isn’t gritty or rough. It’s precise and detailed, smooth and sharp-edged. Putnam is a ski tech at Sugarloaf, and alongside his “brother from another mother,” Bob Ash, he is responsible for tuning and repairing skis and snowboards for the weekend warriors and the professional athletes who patronize this mountain. On a busy day, they can get through over 60 pairs of skis. On average, Putnam estimates, he probably works on 25 or 30 pairs of skis and at least seven snowboards. (He prefers skis, which I learn early on when I ask him about the least pleasurable parts of his job. “Snowboards!” he blurts out, erupting in laughter.)

Today is a particularly busy day at the pro shop. Ash and Putnam move between monumental pieces of equipment with swift confidence. “Look at this mess,” says Ash, holding up a particularly unfortunate pair of skis. Muscular and compact, Ash has an athletic grace and a slightly brusque nature. Lean, lanky, and chatty, Putnam is his complete opposite, both in physical type and personality. Yet they work easily together. This shop is clearly their territory, their natural habitat. They are so engrossed in their work that I wonder whether they even notice when I step outside to go looking for a pair of their finely tuned skis in action.

You wouldn’t know this from the skiers and snowboarders who pass overhead. I sit below the SuperQuad chairlift and eavesdrop, hearing snippets of conversation. “Not a hint of ice,” says a middle-aged woman to her companion. “They have donuts with maple syrup,” says a giddy teenage voice. “I’m so happy!” shouts a child, simply. The air smells sweet and sugary. The mountain is crowded with skiers and the tone is of unrestrained joy. No one seems to notice the lack of sun or the bone-shaking cold.

Instead, Sugarloafers tromp happily from one lift to another, skis and snowboards in tow. I’m waiting to meet skier Sam Morse. At 18, he’s a recent graduate of Carrabassett Valley Academy and a new member of the U.S. Ski Team. He’s agreed to show me what he can do on freshly surfaced skis.

Minutes later, I watch as Morse flies down the slope, spraying a brilliant white mist as his skis cut into the icy snow. He’s clocked 80 miles per hour before, so this quick demonstration is child’s play for him. But I’m impressed. In my everyday life, it’s not often I meet someone who is more comfortable on skis than in shoes.

“Sugarloaf is different from anywhere else I know,” says Morse. At Sugarloaf, it’s not uncommon to meet people who could ski as soon as they could walk. “The average skier is ten times better here than anywhere else.” He says this is partially because of the mountain itself. The trails at Sugarloaf are icy and steep. “You go out West, and obviously there are some guys who are ripping, but they’re just not that good,” he says, and he would know. Morse has been traveling all over the globe, skiing in Utah and Scandinavia in the summer, in Maine and California in the winter. Sugarloaf, he says, breeds professionals.

But there’s a chicken-and-egg question here: do serious skiers come to Sugarloaf because the resort caters to them? Or did Sugarloaf mold itself to fit the needs of the pros who come to ski the technical trails?

It doesn’t matter which came first, because the end result is a symbiotic relationship between a great resort and a great number of professional skiers. The ski shop is a central part of this relationship. “Those two are the guys who make skiing fun,” says Morse, when asked about Ash and Putnam. “You go out on slow, un-tuned skis and it’s just so frustrating. They do the behind- the-scenes work to make everything more enjoyable. Without them, I couldn’t get the speed needed to win.”

I used to think tuning your skis was akin to changing the oil in your car: a necessary element of maintenance that yields no perceptible change. This, as it turns out, isn’t entirely true. “Racers are looking for every millisecond they can gain,” Putnam says. Having the right angle on the side edge of the skis, the right pattern imprinted on the bottom of the skis (commonly called the base grind or the “structure”), and the right amount of wax applied to the bottom— these things all add up to create a pair that performs perfectly. While racers know this better than anyone, it’s a formula that affects recreational skiers, too.

“For the average ski tune, we make sure the skis have some edge hold but not too much,” explains Putnam. “We don’t want them to feel like they’re on razors.” He shows me a pair of skis that he just finished. These skis have a one-degree bevel on the edge. I can see it, but barely. On the metal edge of the ski there is a tiny ledge that has been filed down, creating a very slight slope. On a racer’s skis, which are typically set with a higher bevel at three degrees, the edge is a little easier to spot. But Putnam assures me that they feel drastically different on the mountain. A higher-angle bevel allows for sharper turns and works well on hard-packed snow or ice. A lower angle feels more stable (and is preferable for beginners), yet it doesn’t allow for the same quick handling.

Another important element has to do with the faint patterns imprinted on the bottom of each ski. Sugarloaf recently invested in a $200,000 Wintersteiger ski service machine, which is painted a visually assaulting shade of lime green. This machine can be programed with bevel angles and base imprint patterns to create the perfect surface for gliding over frozen water. As I watch, the Wintersteiger pulls a ski through, grinding the edges down, spraying it with gusts of air, and setting the pattern into the bottom. It’s like watching a car go through a carwash, except for the sparks, which pop like miniscule fireworks as metal meets diamond-tipped metal.

I ask Ash why they need to put a pattern on the bottom of each ski, and he launches into a scientific—yet easy to follow— explanation. “Even as cold as the snow is, when a ski glides over its surface, it creates friction, which creates heat,” he says. “It melts the snow and creates a microscopic layer of water between the surface of the snow and the base of the ski. The structure of the ski breaks up the surface tension of the water, so you don’t get stuck to the snow.” He instructs me to imagine two pieces of glass. Pour water on a single plane of glass, and place the second on top. Then, try to pull them apart. It’s almost impossible. The surface tension of the water acts like glue. “But if you score one of the pieces, they’ll come right apart,” he says. “That’s why we imprint them—there’s nothing worse than a ski that won’t glide.”

Once the edges are beveled and the bottom is imprinted, the ski must be waxed. “Your skis need moisture,” says Putnam as he turns on their infrared waxing machine, the Wax Future. The machine hums as Putnam talks. “Racers wax their skis multiple times a day,” he says. “I wax mine all the time, too. If you keep your skis in good condition, they’ll last almost forever.” A good athlete knows to respect his tools, to treat his equipment with care. And that’s what these guys are: athletes, first and foremost.

Although they love their jobs and clearly work hard, like many other employees of the mountain, they were drawn here by their love of the sport. Both Putnam and Ash are in racing leagues. They spend much of their spare time carving sinuous shapes into the mountain on freshly waxed skis. “When I first moved to Sugarloaf, I thought it would be a hobby,” Putnam admits. “I thought it was something I would do for a few years until I went back to real life.”

But Sugarloaf’s magnetic pull doesn’t decrease with time. It seems that the longer people stay in this natural playground, the more loath they are to leave. “As it turns out, this is real life,” Putnam says. “I think, if you follow your passions and do what you really like, something good always falls into place.” His dream life may not look like what he imagined, but here in the shadow of the mountain, he’s found a way to make a life filled with snow and ice—and yes, even diamonds.