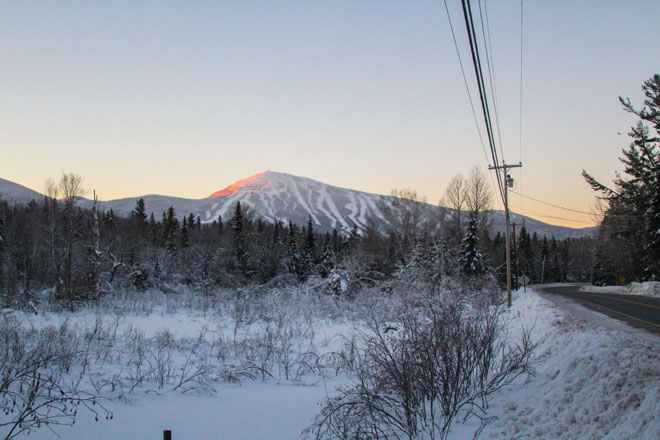 The road to Sugarloaf is long and winding. It moves through small towns, past A-frame ski homes, and along the Carrabassett River. For much of the drive, Sugarloaf Mountain is out of sight until one bend in the road, when the 4,237-foot summit comes into view. The north-facing mountain towers above the tree line, its face carved with trails that approaching skiers will be on later that day. This spot on the road is “Oh My Gosh” corner.

Amos Winter, a local general store owner, who—with the Bigelow Boys—cut the first trails on Bigelow Mountain, was the first one to drive from Kingfield to Stratton and see the potential in Maine’s second highest peak. Backed by the Maine Development Commission, and designed by Sel Hannah, the Sugarloaf Mountain Ski Club cut the initial trail in the summer of 1950 and named it after its initial visionary, Winter’s Way.

In The Story of Sugarloaf, John Christie, former general manager, writes about this first summer. “Weekend after weekend during the summer of 1950, skiers, friends of skiers, and skier aficionados from all over the state gathered on the northerly flank of the mountain to hack out a trail,” writes Christie. The tale of Winter’s Way, where volunteers drove to Stratton from all over just to be able to hike up the mountain in the height of winter on skins to ski down the 1.25-mile trail, is telling of the future dedication of this mountain community. “Sugarloaf is two things: it’s a mountain and a feeling. The mountain is self-evident, and rounding ‘Oh My Gosh’ is a great way to see the mountain, but the special part is the feeling when you are there,” says Christie.

Today, as seen from the corner on Carrabassett Drive, over 163 trails and glades trickle down Sugarloaf’s face. The turn can be shocking for first-timers, for others its pure excitement, for many it’s a welcomed sight.