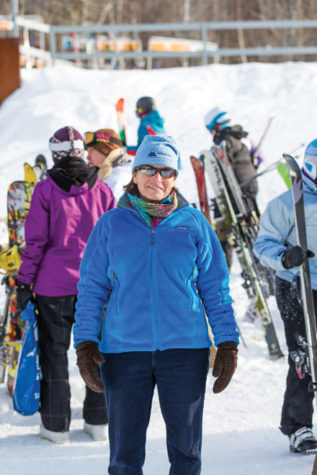 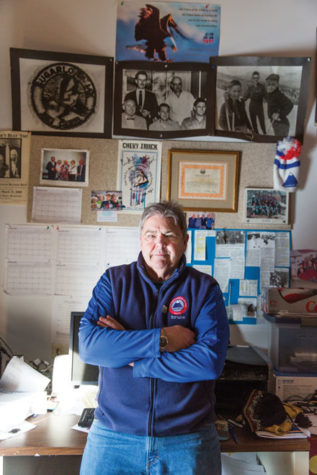 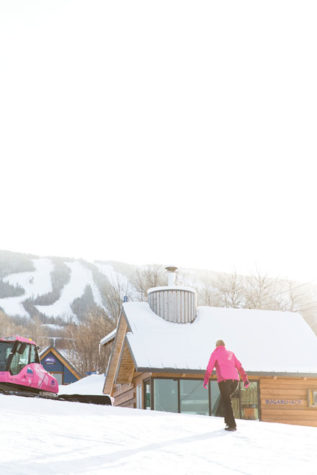 Meredith Strang Burgess at Sugarloaf, where she spends weekends with her family. She has made it her personal mission to promote breast cancer awareness and raise funds for research and treatment. 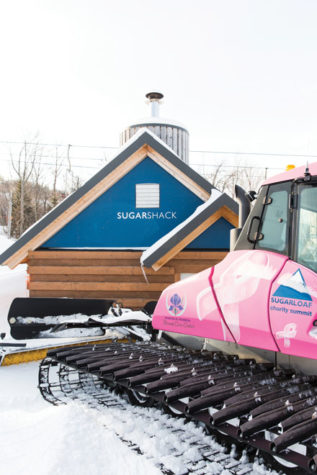 Sugarloaf brings awareness to cancer and the summit with an appropriately hued snowcat grooming machine. This year marks the 16th annual Sugarloaf Charity Summit, which kicks off with the Snowshoe Shuffle, to be held December 30, 2015. 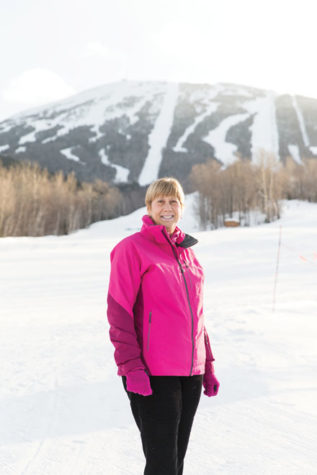 Skiers take on the cancer cause.

When it comes to the Annual Sugarloaf Charity Summit, “we talk about raising a mountain of money,” says Meredith Strang Burgess, CEO of Burgess Advertising & Marketing in Portland. Now celebrating it’s sixteenth year, The Summit, which includes a charity ball, snowshoeing, raffle, and individual fundraising through Loafers for a Cure, has brought in more than $2 million – $214,000 in 2015 alone.

The Charity Summit isn’t simply about the money. For the “loafers” who have lent their time, expertise, and dollars to the cause, it is the cause itself that is important: helping Mainers fight and find a cure for cancer. Proceeds go to the Maine Cancer Foundation and the Martha B. Webber Breast Care Center at Franklin Memorial Hospital.

“All of us have been touched by cancer in one way or another,” says Charity Summit organizer Martha Bradley. “That’s why people have joined on. That, and because it’s a quality event. We put our heart and soul into it.”

Charity Summit co-organizer Bruce Miles agrees. “Sugarloafers really like to give,” says Miles. “They are an amazing group of people who like to combine a party with the chance to give back.”

Bradley and Miles have each had long relationships with the Sugarloaf community. Bradley was the second female hired as a paid staff member of the Sugarloaf Ski Patrol. Miles first skied the mountain as a seventh grader in 1961. Soon after, he met his friend, Peter Webber. As an adult, Miles coached Webber’s kids in ski racing. They shared another unfortunate commonality: both of their wives had been impacted by breast cancer.

Webber’s wife, Martha, died of the disease in 1995, at the age of 52, but Martha has not been forgotten. With locations in Farmington and Livermore Falls, the Martha B. Webber Breast Care Center now carries on her memory. It provides mammograms and other cancer screening tests, diagnosis, clinical and support services to individuals in the surrounding communities, regardless of their ability to pay.

Miles’s wife, Kathy, learned that she had breast cancer seven years ago. “Kathy was diagnosed at the Martha B. Webber Breast Care Center, which is not far from where we live,” says Miles. “It was great having a facility close to the Kingfield-Carrabassett area, instead of having to travel hours to get the care we needed.”

A year after Kathy’s diagnosis, Webber approached Bruce Miles about helping with the Charity Summit. He readily agreed. By 2014, Kathy was participating as an individual fundraiser with Loafers for a Cure. In 2015, Loafers for a Cure collected more than $41,000 in donations from friends and neighbors. “Last year, Kathy raised $6,700, which is no small piece of change,” says Miles. “Being a breast cancer survivor, she knows how important it is that everybody has the chance to get mammograms, even if they can’t afford them.”

Meredith Strang Burgess is a weekend Sugarloafer and also a breast cancer survivor. A former three-term member of the Maine House of Representatives, she was diagnosed with the disease in 1999. Strang Burgess has made it her personal mission to promote breast cancer awareness and raise funds for research and treatment. She is known for (intentionally) being the last one to cross the finish line in the Maine Cancer Foundation’s Tri for a Cure triathlon each summer. “One hundred percent of the money that we raise for the Maine Cancer Foundation stays right here in the state,” says Strang Burgess. “At least 70 percent goes to cancer research and development.”

Even in the small Sugarloaf community, many are affected by cancer. During the annual Charity Summit event, several hundred people gather in the King Pine Room, and Strang Burgess asks those who have been diagnosed with cancer to stand up. The number of people who get out of their chairs might send chills up the spine, but Strang Burgess believes the exercise is vital. “It’s important to be cognizant of why we’re there,” says Strang Burgess. “We do a candlelight ceremony that makes people sad, but it also makes people really appreciate the gravitas of what cancer really is.”

“The good news is that there are so many survivors,” continues Strang Burgess. “The bad news is that survivors have to have to gone through cancer. It’s a very emotional evening, and we’ve been true to the cancer message. With the Charity Ball, we’re not glossing it over; it’s really serious stuff, and it’s still killing people, and it needs to stop; but we also need to have a little fun, because we’re still here today.”

The sellout Charity Ball is the culmination of the Sugarloaf Charity Summit, which begins with a December snowshoeing event at the Sugarloaf Outdoor Center. Last year 45 participants walked and snowshoed the two-mile loop, with prizes given out for the most creative costumes.

Sugarloafers can also take advantage of the one-day Cut for a Cure event, or purchase raffle tickets throughout the Charity Summit season. Cut for a Cure allows people to cut the line, and use the faster Perfect Turn ski school access lanes in exchange for a 20-dollar donation. For 10 dollars, Sugarloafers can buy a raffle ticket for a two-year season pass. This includes use of the Outdoor Center and no blackout dates.

“Last year’s raffle winner was a radiologist from the Augusta area, who reads mammograms every day,” comments Bradley. “When I called him to tell him the good news, he was in the SuperQuad lift line, and I could hear him yelling ‘woo hoo!’ at the top of his lungs.”

Next year the raffle drawing will take place at the Charity Ball on January 30, 2016. The Charity Ball, held in the King Pine Room at the Sugarloaf Conference Center, features live and silent auctions, dancing and refreshments. More than 200 auction donors and 70 volunteers donate time and resources. Everyone helps out. “The employees at Sugarloaf go beyond their normal duties with the event,” says Miles. “Everybody from the guest services department to the food and beverage department to hospitality.”

Sugarloafers, it seems, are eager to share what they have. “Last Friday at happy hour, I was at a local watering hole called Tufulio’s, and a lady came up to me as I was leaving,” says Miles. “She handed me a 20 dollar bill and said, ‘I don’t get to see you that much anymore, but I really want to thank you for all you’ve been doing. Please put this money towards the Charity Summit.’”

“One of our youngest Loafers for a Cure this year was nine years old,” Bradley joins in. “He was going door-to-door and literally collecting one dollar at a time. It was just remarkable to see the life lessons that his parents were teaching him through his fundraising efforts.”

Just as important as the money being raised is the realization that cancer has touched all of us—Sugarloafers and non-Sugarloafers alike. “Everybody has a different journey that they go on,” says Strang Burgess. “Every journey has different parts and some have tougher parts than others. As a survivor, cancer is always in the back of your mind.”

“None of us know how long we have,” continues Strang Burgess. “After my treatment, I was crazy fanatical about time. I couldn’t cram enough into one day. I was in a hurry, because you just have this appreciation of how short life is.” Through raising funds for cancer care and research, the Sugarloaf Charity Summit brings hope to patients, families and friends; through community building, it shines a light on the neighborly love from which we each may benefit during this one brief, brilliant life we all share.