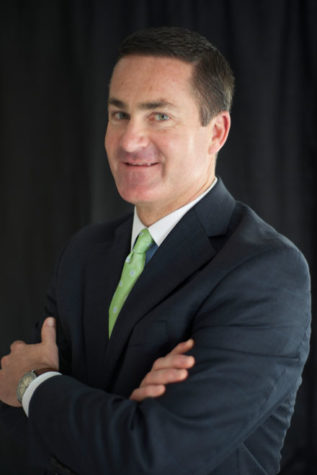 Brian Corcoran is the founder and president of Portland-based Shamrock Sports and Entertainment. He was the emcee of the 2015 Sugarloaf Charity Ball. Corcoran and his wife, Melissa Smith, have a son named Baxter. They live in Falmouth.

You grew up in Old Orchard Beach and you were an athlete in both high school and college. When did you realize that you wanted to do something with sports that did not involve being an athlete?

I ran track all the way through college at Eastern Kentucky University. My events were the 800 meters, the half-mile, and the mile. During my junior year, I realized I was not going to be an Olympic athlete. I was studying sports medicine until I realized there was this thing called sports marketing and sports business. I had a mentor who was on the sports marketing side and because I was actively involved in student activities I was able to meet a lot of people. It happened that they were looking for somebody in the sports marketing division of the athletic department. Right out of college, I became the guy doing all the halftime shows at all the basketball and football games. Little did I know back in my naive twenties that sports marketing and Shamrock would be a part of my future. It has been a lot of fun.

One of Shamrocks strengths as a company is the staffs relationship skillstheir abilities to collaborate and interact with people.

At Shamrock, were matchmakers. Sports happen to be the product and brands and companies are on the other end of the equation. We provide the matchmaking. Whether its the Boston Marathon, the Professional Bowlers Association, or a NASCAR race, we really thread the needle between the two organizations. In some cases, were talking millions of dollars that companies are investing into sports properties, as we call them. Its important to have a relationship and rapport with those Fortune 500/Fortune 1000 companies.

Your wife, Melissa, is from a small town named Winnnear Lincoln. She is the president and chief executive officer of Wright Express Corporation (WEX Inc.). Your businesses both involve working with global partners. As native Mainers, did you ever think that this might happen, and does it somehow make sense that the two of you found each other?

I think it was fate that we met. Ill go so far as to call her my soul mate. We love playing on the global stage. She stayed here as she rose through the ranks at WEX Inc., and I had to go away for 20 years. My only regret is that I lost 20 years of not living in Maine in order to get to where we are now with Shamrock. But now we have it all. Were youngin our fortiesand we have the chance to make a difference and help Maine grow. Its not just about the business. Its also about community well-being. All the friends, family, and other people that are so vitally important to us are right here. All of our family members are Mainers, through and through, and now we have a chance to share our own growing family with them. Thats pretty special.

How has your son changed the way you look at the world?

The fact that we have a baby boy at home brings a different perspective. Were on his schedule, not ours. While we still have a work calendar, we also get out at 5 a.m. with the stroller, and thats when we know we can spend some time together. It really makes you measure minutes, not just hours. Its not just about looking at my Outlook calendar and finding out what meetings I have today. Its about how I am going to be a better husband and a better dad each day.