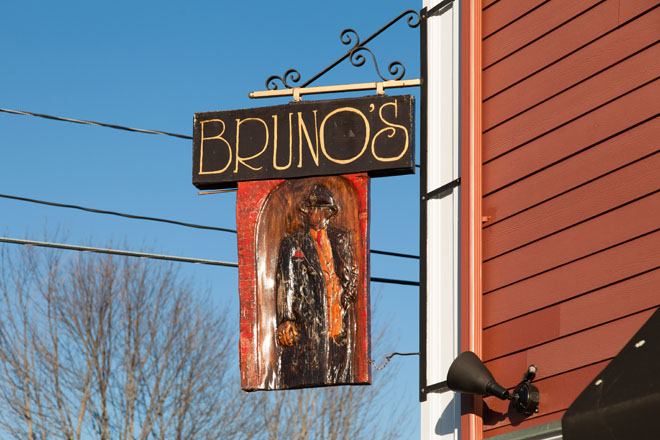 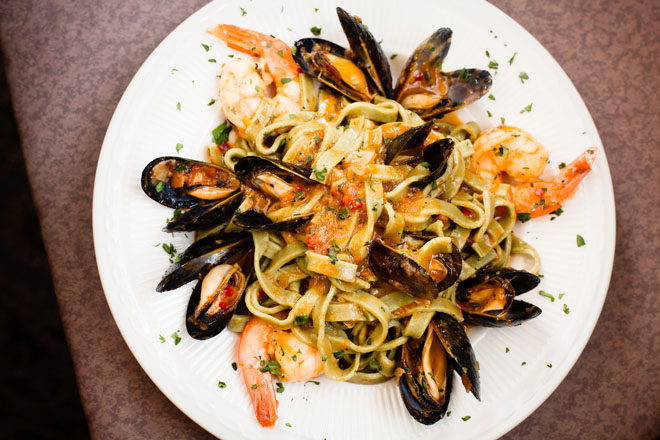 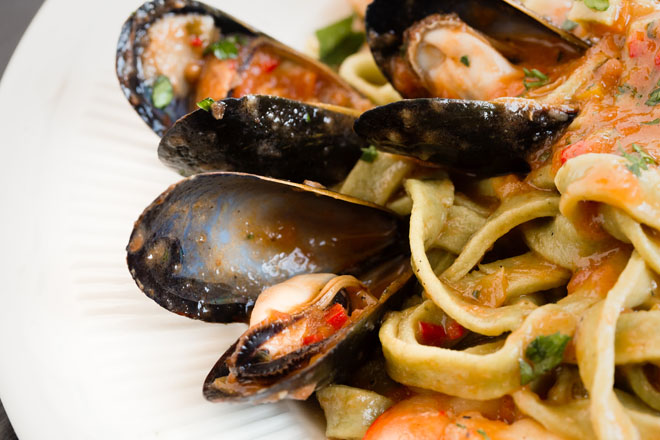 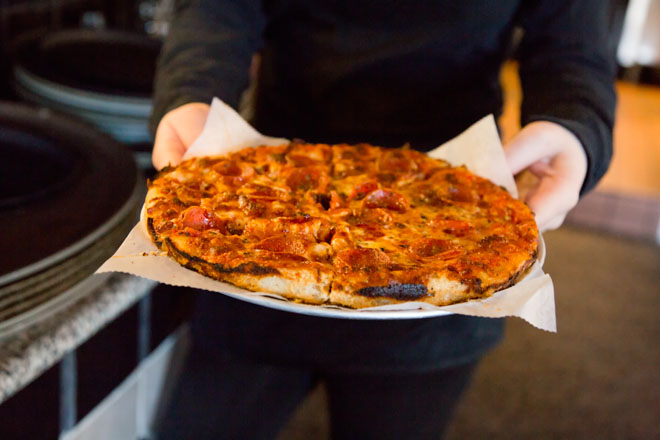 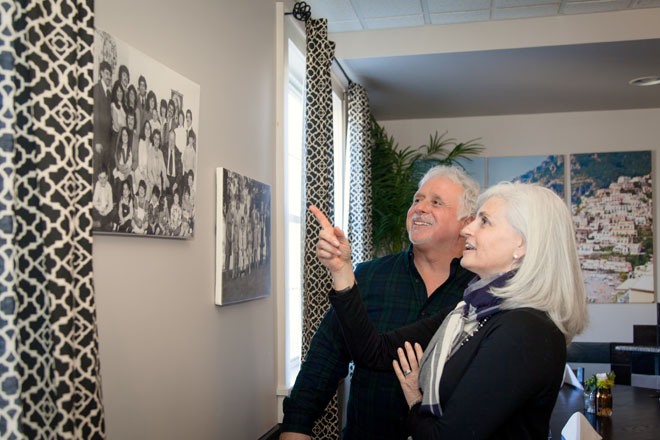 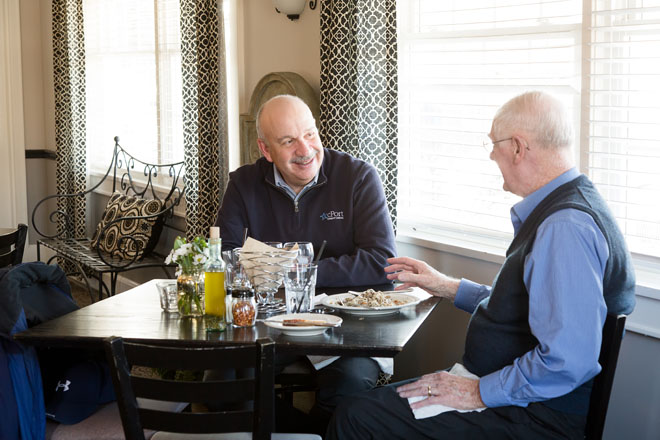 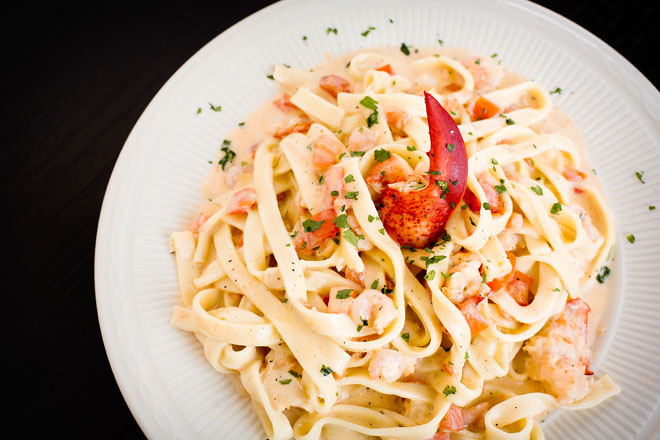 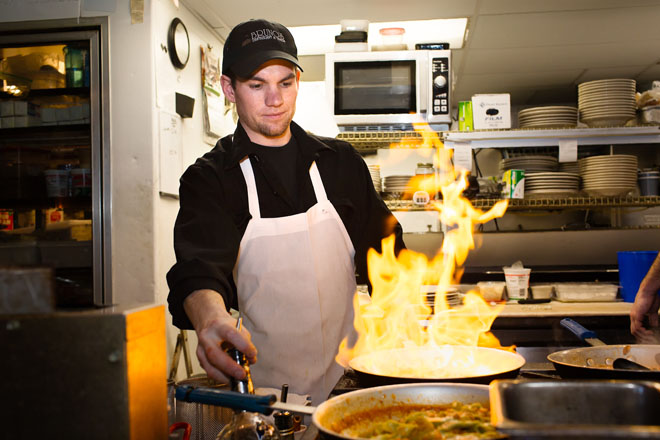 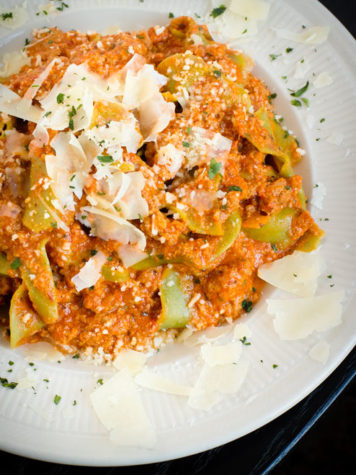 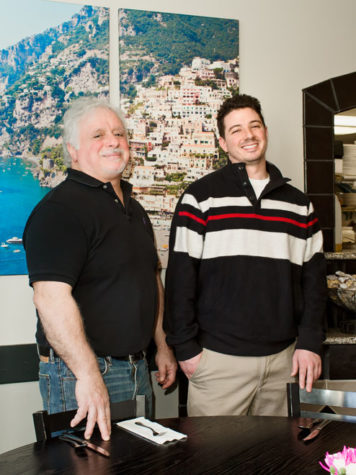 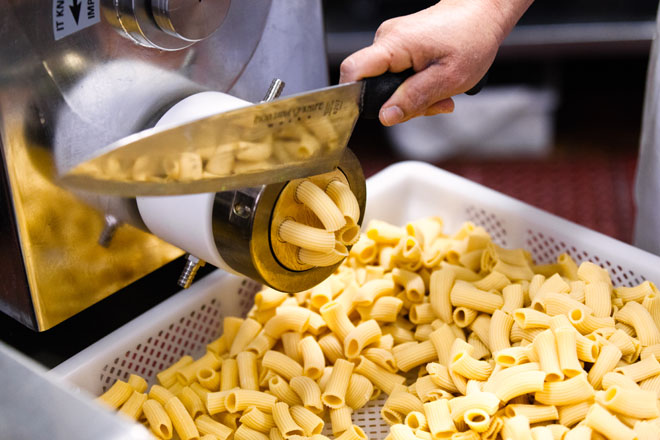 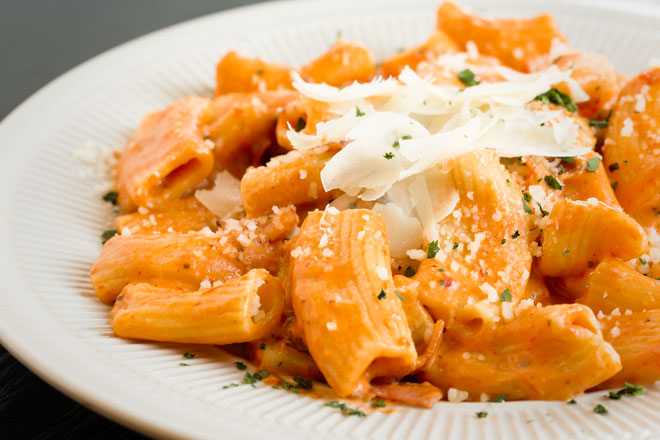 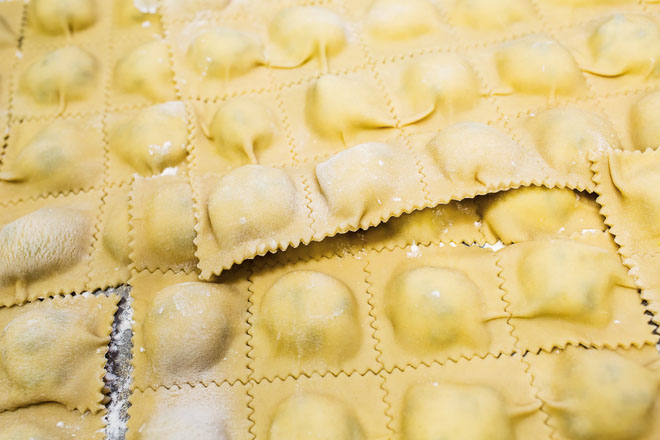 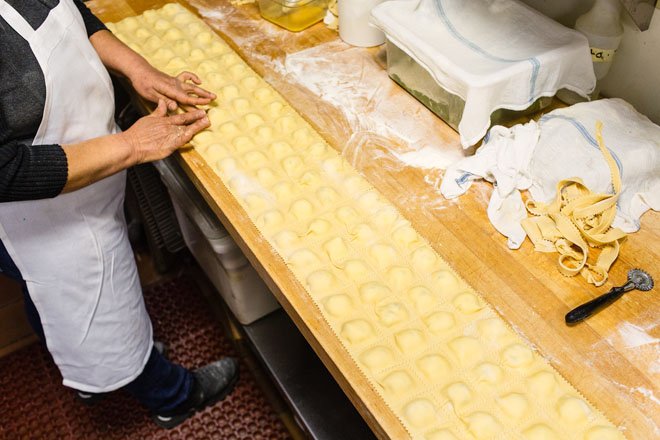 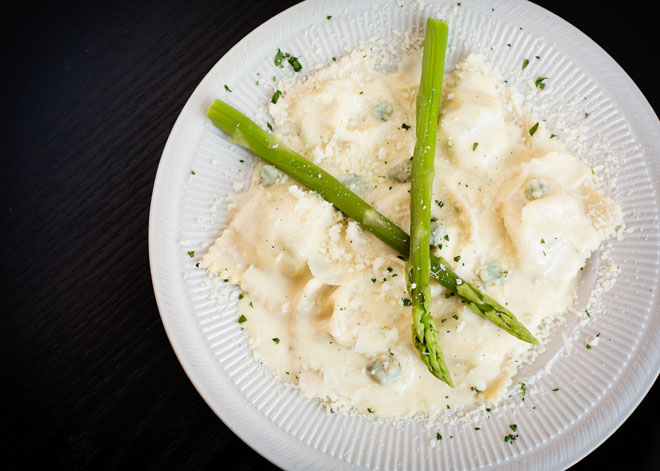 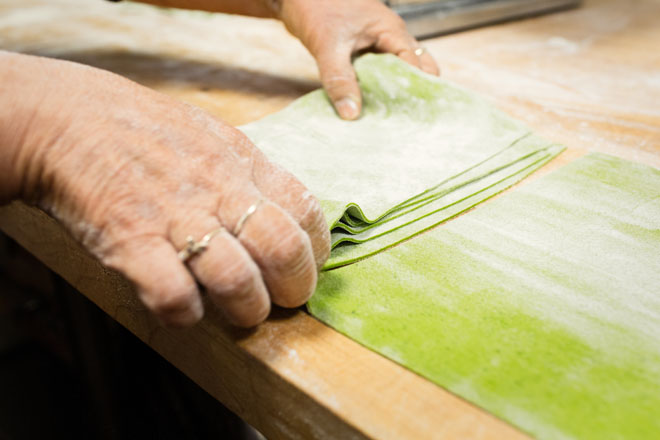 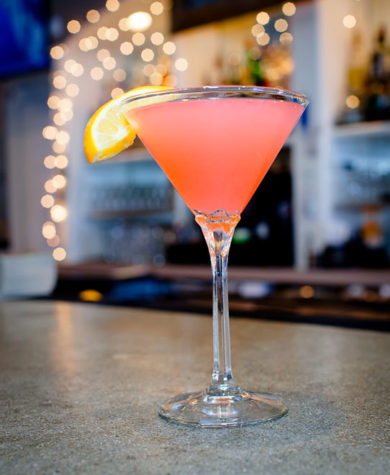 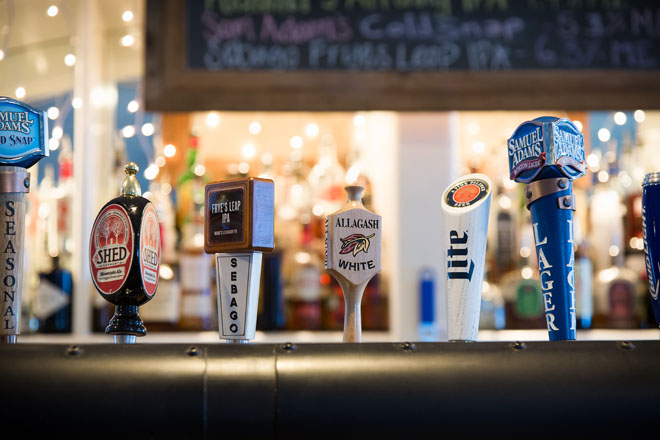 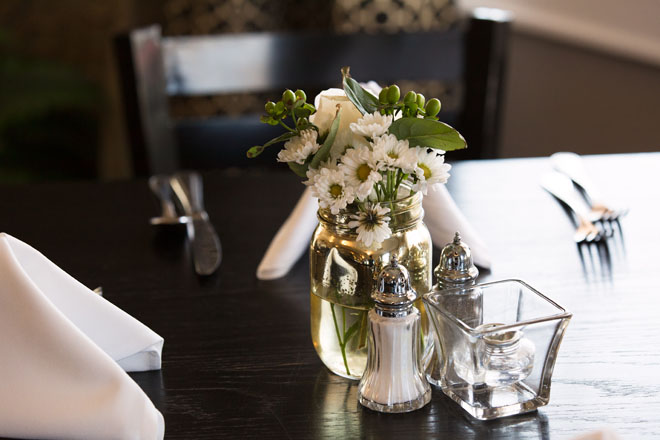 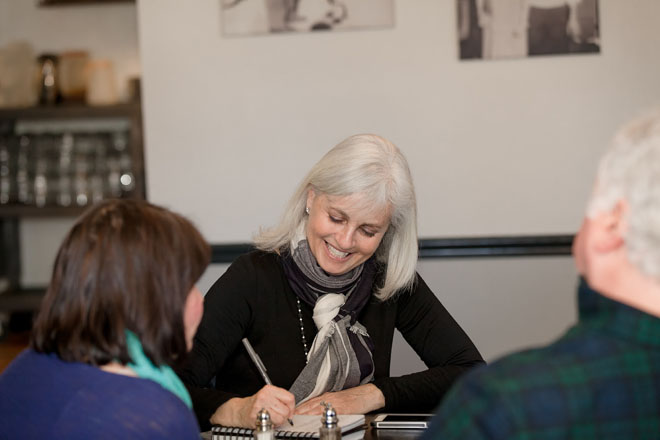 Plate after plate of handmade pastas and sauce m­ade from family recipes are brought to the table on a recent visit to Bruno’s for my weekly eat blog. I’m thrilled when owners Bob and Vicki Napolitano and their son Dan sit down to enjoy the fruits of their labor and chat.
Vicki runs the dining room, Dan is the general manager, and Bob oversees it all, including creating specials and recipe testing. Napolitano nieces, nephews, and other family members work throughout the restaurant, and some stop by the table for a bite of pasta. The whole experience leaves me wishing that I too had grown up in a large Italian family.

The restaurant business is what the Napolitanos know, and especially the Portland scene. In the 1940s, Bob’s grandfather had an Italian grocery store on Middle Street, which was then the heart of the city’s “Little Italy.” In the 1960s, two of Bob’s uncles opened the original Maria’s Ristorante. Bob’s father-in-law was Tony DiMillo, the owner of DiMillo’s restaurant on Portland’s waterfront. “He was a smart businessman, who helped steer me in the right direction,” says Bob. “Tony was my mentor and he guided my decisions about the restaurant.”

Growing up in Portland’s East End, Bob was the youngest of seven children and he learned to cook by watching his father. “He would go in the kitchen, find whatever there was, and throw it in the pot—it always turned out good,” he says. Some of his recipes are used in Bruno’s kitchen today, including the lasagna, sausage, meatballs, and sauce. While we talk, the sauce simmers on the stove in an enormous pot. When I ask Bob what’s in it beside tomatoes, he just smiles broadly—it’s clear he doesn’t want to give away family secrets.

Bob started Bruno’s as a bar in the former neighborhood, right next to Micucci’s on India Street. But, he tells me, people were hungry, so he added pizza, a few Italian dishes, and a steak sandwich (still a best-selling item on the menu). “These old Italian guys, used to hang out on the corner, including my uncle Frank,” he reminisces. “He would get some meat from Micucci’s and some dough from me, then fill it with meats and cheeses and fold it up.” This was the start of the first calzones to be sold in Portland. Uncle Frank, Bob tells me, is also responsible for teaching him how to make clam sauce and seafood marinara. Today that clam sauce with linguine is a house specialty.

In 1999, Bruno’s moved to its current location on Allen Avenue in North Deering. There’s a dining room on one side and a tavern on the other. The tavern is a neighborhood-gathering spot where “you’ll always see someone you know,” says Dan. Families seem to prefer the quiet of the dining area, where the kitchen is partially in view. Black and white photos of both the Napolitanos and DiMillos hang on the walls—a loving display of family ties.

Almost everything is made in-house at Bruno’s from salad dressings to desserts. I watch as a kitchen assistant runs sheets of dough through a pasta maker, thinning the layers with each pass. She lays them on the counter and uses a pastry bag to dollop a mixture of ricotta and asparagus in a grid. She covers them with another thin piece of dough and quickly cuts them into large squares for ravioli. “We’ve always made the ravioli by hand,” Bob tells me. “Two years ago we decided to make all our pasta from scratch and bought an extruder.” Tina fills the machine with fresh dough and as rigatoni shapes are pushed out, she slices them off rhythmically. Soon a large container has been filled with the fresh pasta.

The asparagus ravioli is served in a Gorgonzola cream sauce and it’s fantastic. The fresh pasta is the perfect combination of a chewy exterior with a creamy filling. A plate of rigatoni vodka is a delicious version of the classic with rosy sauce and bits of salty prosciutto. Bruno’s Bolognese is the slow-cooked kind with beef, veal, and pork, a touch of cream, and served over spinach tagliatelle, it’s hearty but not heavy. The same fresh pasta is used in a zesty shrimp and mussel fra diavolo, full of bold flavor. Pasta dishes are wildly popular at Bruno’s, but the rest of the menu deserves attention as well. There are excellent, chewy-crusted pizzas, fresh seafood, and specialties like the New York steak pizziola and pork osso bucco.

Bruno’s is most definitely a family affair, as the best Italian restaurants usually are. “My dad sets a good example,” Dan says. “He works really hard.” Bob smiles and shrugs. “It works,” he says.