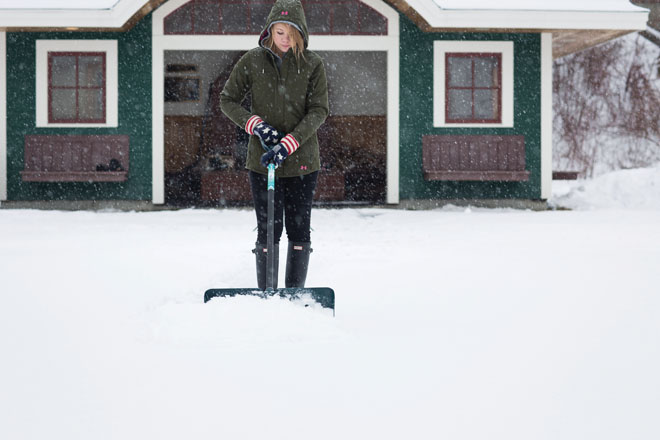 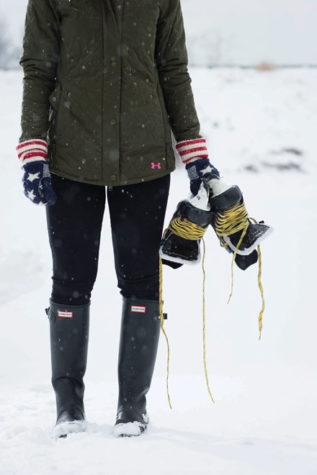 Ice skating is an affordable winter sport. All you need is a pair of skates and a space to skate. 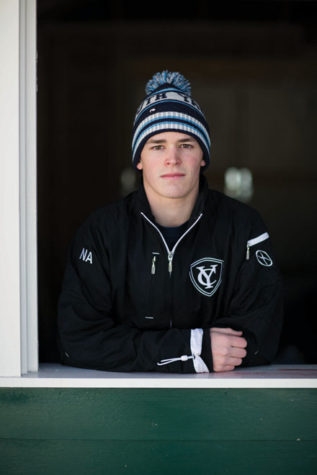 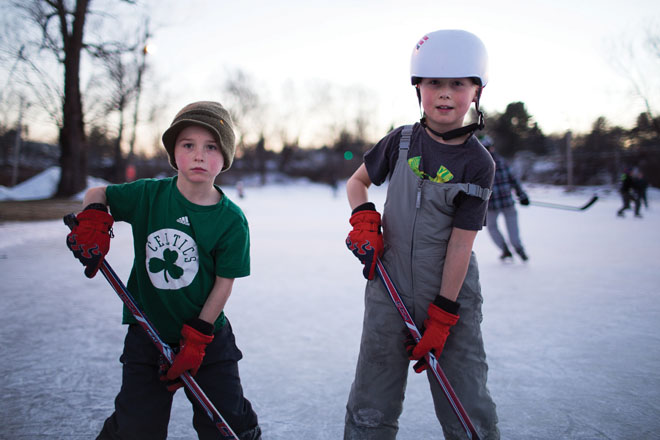 Owen and Will get ready for an impromptu game at the Orland H. Blake Skating Pond. 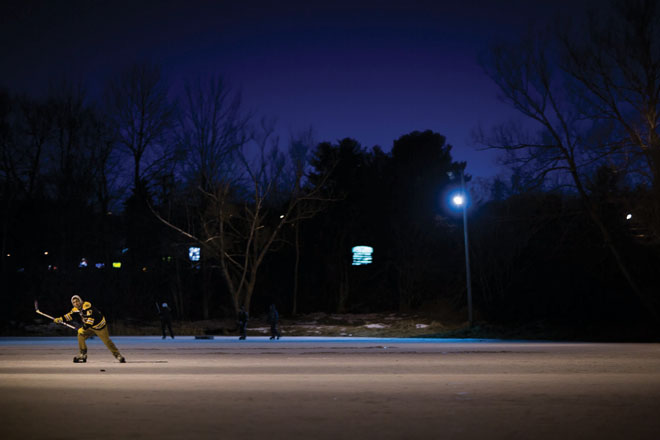 Local ice rinks are more than just places to practicealthough they serve that purpose, too. These frozen playgrounds have become community hubs for the tight-knit towns of Yarmouth and Falmouth. 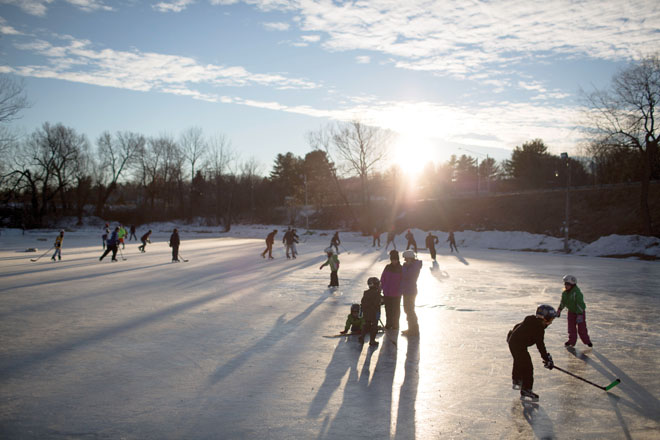 The Orland H. Blake Skating Pond was built in the 1930s. The majority of it was dug by hand way back when. The town council was responsible for helping people in need, and this was one of their ways of giving back to the community, explains Karyn Garofoli, director of Yarmouth Community Services. Below: Nick Allen, a local high school student, built an addition to the Orland H. Blake warming hut as part of his Eagle Scout training.

Stories from the Ice

A pair of teenage boys runs onto the ice in sneakers. “Will you be my Valentine?” shouts the one in the bright red jacket as he crashes into his friend. Wrapping his gambling arms around him, they fall to the ground in a tumble of legs and shouts. I skate by them slowly and the shorter boy calls out to me, “Will you be our Valentine?” I laugh and tell him sure, but he should put on some pants if he’s going to stick around. In the timeless tradition of middle-school boys, both of them are wearing shorts.

It’s nine degrees outside and I’m making slow circles around the outdoor rink at the Family Ice Center in Falmouth. Although it’s February 14th, there are plenty of skaters here who aren’t on dates-unless you consider taking your four-year-old out for her first skating lesson a date. Small children push bright orange buckets, teetering behind them as they find their footing. Parents cluster near the warming hut, thermoses of hot chocolate clutched in their gloved hands. My fiancé returns from his trip indoors with a cup of fresh-brewed coffee. He slips his arm into mine, and we skate on wobbly ankles and uncertain legs, leaning on each other for support.

After my first visit to the Family Ice Center, I find myself going back again and again, moving faster and faster across the slick surface. When I was first assigned a story on winter skating in Maine, I was a little nervous. There was a time when I could skate backwards with a hockey stick in hand, but it had been a solid decade since I’d laced up a pair of skates. Fortunately, it turns out ice skating is like riding a bike. Once you get over the initial balance issues, your body remembers how to push, coast, and glide.

It’s also, like riding a bike, an addicting hobby. Your breath comes in cold gusts and your body begins to sweat. At first, you are slow and graceless, like a fowl stumbling around the barnyard. But soon, fear drops away and you experience childlike glee at moving faster than your two legs can typically carry you. You feel fast and free and young.

And this is true no matter your actual age. Although I prefer skating outdoors on the refrigerated pond, which sits next to a charming warming hut and allows for a little vitamin D to creep under your skin, I was happy to learn that the indoor rink at Family Ice Center also has community skating hours. I spot a pair of white-haired ladies making circles around the ice. Their names are Rachael Beliveau and Liliette Bretton, and they meet at the ice center several times a week to skate together. “We were both brought up in Lewiston,” explains Liliette. “Although actually, we never connected in school—we weren’t friends as girls. We met here, after all that time had passed, and we recognized each other.” Liliette saw Rachael skating from a distance and, although it had been over 50 years since the two women met, she remembered Rachael from skating school back in Lewiston. She approached her to say hello, and from there, a friendship grew.

I can’t help but comment on the missed- connection nature of their relationship. Do they ever feel sad that they didn’t meet sooner? “Oh yes,” Rachael says, “we could have been friends all along, but isn’t this nice?”

And then we part ways. They lean in toward each other and talk quietly as they skate away. An adolescent girl whizzes past them in a figure skating uniform. As the girl practices her twirls and jumps, the two friends laugh and skate, thick as thieves.

Another winter day, another ice rink. This time, I’ve stopped in Yarmouth at the Orland H. Blake Skating Pond. I learn from Karyn Garofoli, director of Yarmouth Community Services, that this rink has been in operation since the late 1930s. “The majority of it was dug by hand, way back when. The town council was responsible for helping people in need, and this was one of their ways of giving back to the community,” she explains. “It’s used for everything. We offer our Learn-to-Skate program on Saturday mornings, bright and early. It’s a big part of Yarmouth life—and it’s important to us that we can get kids out there at a young age.” The younger a child is when she learns to skate, the more likely she will go on to play high school hockey or to participate in figure skating. Plus, skills learned at a young age are more likely to stick, becoming lifelong hobbies, passions, or careers.

Yet one of the wonderful things about ice skating is how it transcends age. Children of all ages use the Orland H. Blake Skating Pond. During the day, students from the nearby Yarmouth High School can be spotted playing rousing games of broomball while a gym teacher referees. After school, hockey players come out for practice. On the weekends, families swarm the rink. Small children teeter around on secondhand skates and parents stand by the warming hut, nursing cups of coffee or tea.

Although it takes the Yarmouth parks department a good deal of work to maintain the pond, it’s worth it. The Orland H. Blake Skating Pond is a true community hub, where people can come together for a wholesome, healthy activity. There is no charge to skate here, so all you need is equipment (which, as Garofoli helpfully points out, can be purchased for next to nothing at the town’s annual ski-and-skate swap).

Similarly, the Family Ice Center strives to keep costs low for skaters. “We’ve been open for 16 years, and our cost has never gone up. Our public skate fees are $5 for everybody above the age of five,” says Josh Brainerd, general manager at the Family Ice Center. “We certainly could, and some say should, charge more. But it’s important to us that people can afford to skate.”

Many winter sports can be expensive (consider the cost of lift tickets, for example) and for many families, the price can be prohibitive. But ice skating is a good way to keep active during the six months of cold. “Once wintertime hits, which we all know in Maine lasts forever, skating has always been popular. You can’t take your kids to a playground. Sports fields are covered in snow. Ice skating is one of the few activities you can do easily and cheaply,” says Brainerd, who has been skating for over 20 years.

These small-town ice rinks have come to symbolize more than the sum of their parts. It’s just frozen water, but to kids like Nick Allen, a recent graduate from Yarmouth High School, the pond is something far more significant. It’s where he can hang out with his friends and his girlfriend after school. It’s where he can practice hockey and master new skills. It’s also where he recently completed his Eagle Scout project by building a new shed on the Orland H. Blake warming hut, a much-needed addition that will house hockey gear and other outdoor supplies.

“Hockey and Boy Scouts have both been huge for Nick,” says his mom, Holly Allen. “They’ve taught him leadership, how to be a part of the community, and how to build lasting relationships.” The Eagle Scout project also taught him how to raise funds, work with the town, and build a small outdoor lodge. “Building the project was the easiest part,” Nick admits. “I had to do all the planning and get permission from the town and support from local organizations.” From start to finish, his project took ten months, and in the end, it brought the town of Yarmouth a new space to store hockey gear and concessions. Nick, like the town’s former council members who created the pond so many years ago, saw a way to give back to his community and seized it.

Winter in Maine is often characterized as a furious beast, a thing that blows through our gardens and tears at our sanity. But it can also be a quiet time, when sound is muffled by snow, and peace, as William Butler Yeats once wrote, comes dropping slow. Steady as the drip of water off icicles. The ice rink offers a winter experience of the second type. Skating around the pond, I feel as though I’m in a scene from an old postcard, living in a Norman Rockwell America. For parents like Holly Allen, the ice rink is a place where kids can blow off some steam and roam free. “It’s a great outlet for them,” she says. “And with the fireplace going inside the hut, it’s actually a very nice place to hang out.” She doesn’t mind when her 12-year-old daughter requests Holly accompany her to the rink, or when Nick spends all afternoon out with his friends. “It’s a community place,” she says. “You’ll talk to people in their 40s and 50s, and they remember skating down here as kids. Now their kids skate here.”

After Holly leaves and I begin my drive back to Portland, I find myself wondering: Will my kids someday skate there? I don’t have any small skates to lace (yet,) but I hope so. In the meantime, maybe I should practice a little more, smoothing out my ungainly strides until I can move in time with those around me. Until I no longer need to lean on my fiancé for support, and we can slip our gloved hands together, gliding steadily toward some happy future.