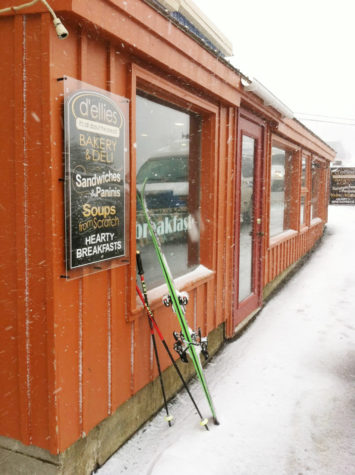 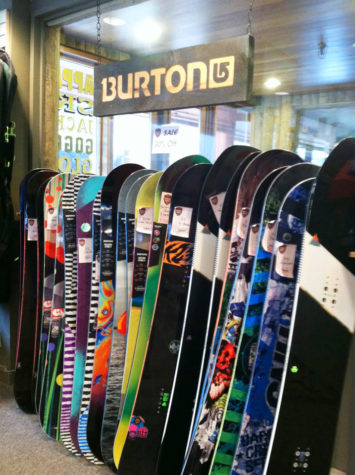 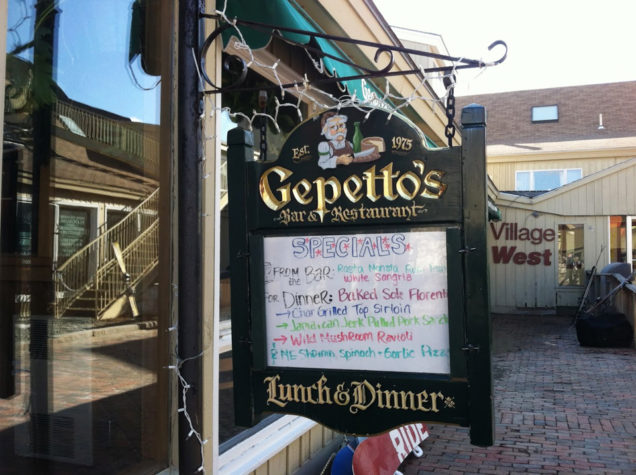 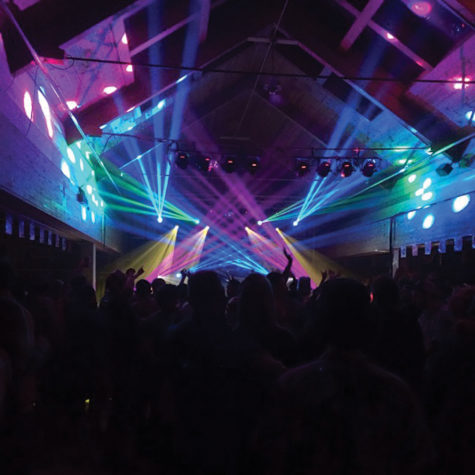 Stage lights inside the Widowmaker Lounge during a Reggae Fest concert 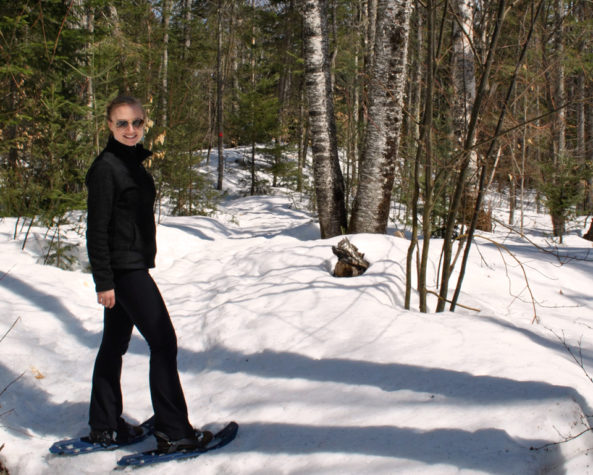 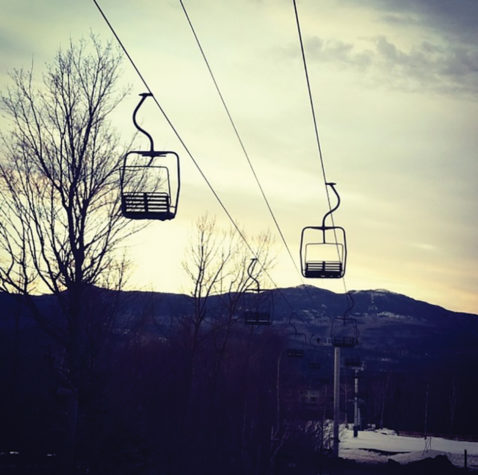 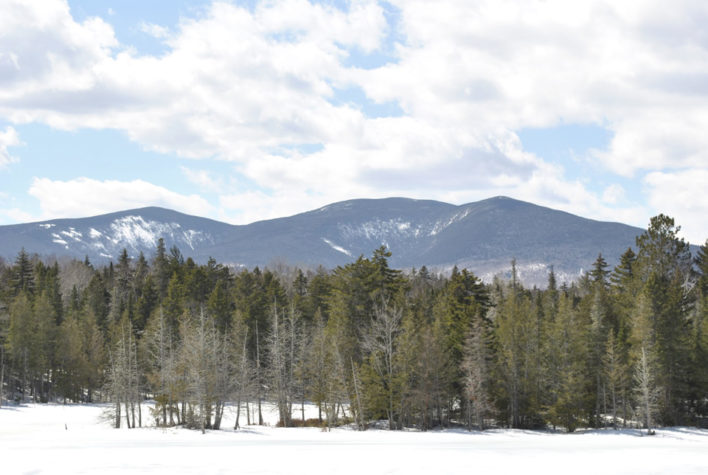 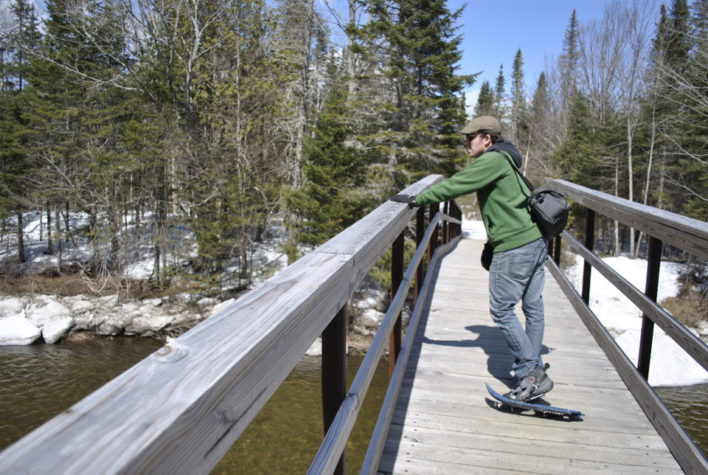 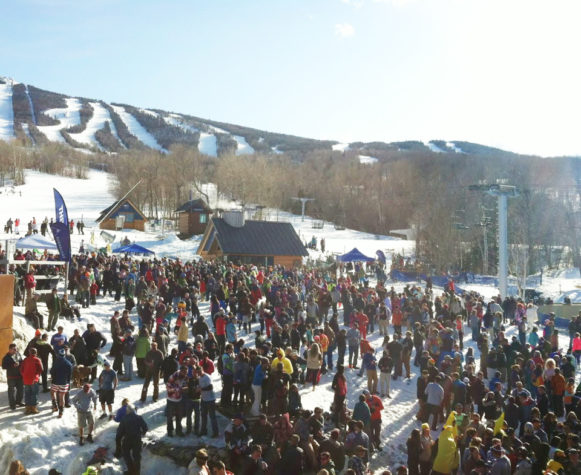 The packed beach during Reggae Fest 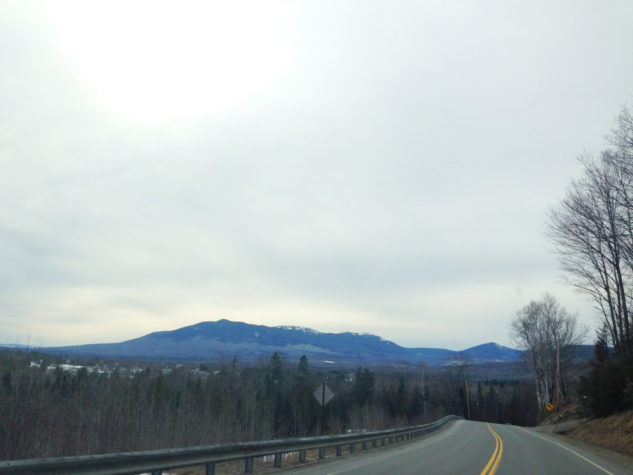 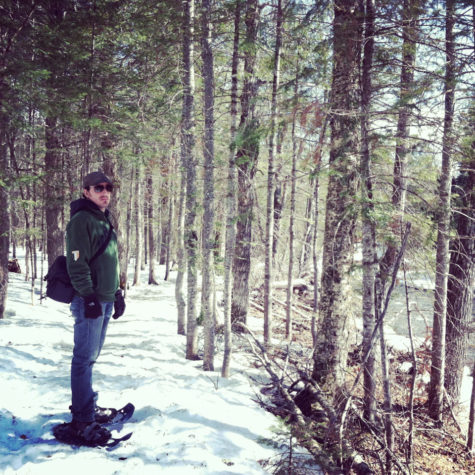 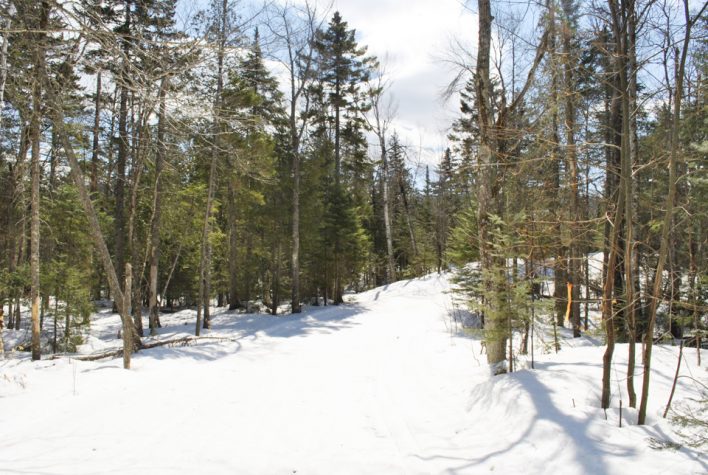 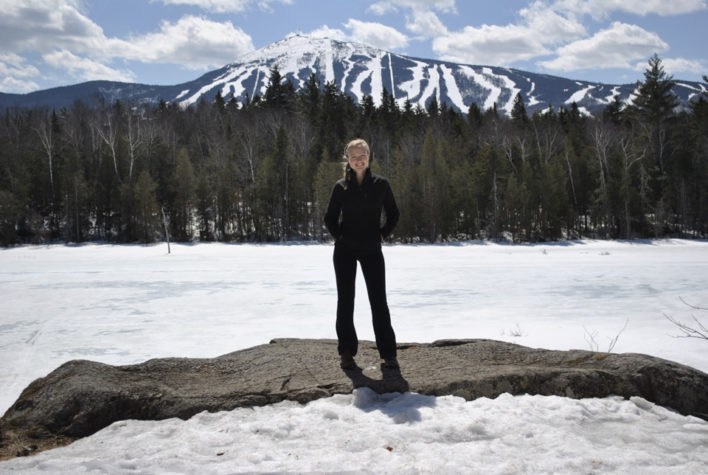 5:30 p.m. @ Sugarloaf Mountain Hotel
In the parking lot tailgaters in lawn chairs sit around grills, and coming down the mountain, skiers and snowboarders are dressed in tie-dye and wildly bright apparel. Sam points to a duo with skis slung over their shoulders— one is in a gorilla suit and the other is dressed like a banana. We are quickly realizing that Reggae Fest is kind of like a Halloween party on the mountain, where 80s snowsuits are relevant and practical. The valet takes care of our car as we unload and head inside to check in at the hotel.

6:30 p.m. @ 45 North
After a seamless check-in, we drop our bags in a guest room that has a beautiful view of the untamed Bigelow Range northwest of Sugarloaf. We follow the reggae music through an opened barn door into the hotel’s restaurant that has a rustic, cozy interior. A six-piece band plays to the après-ski crowd. After our first round, we head into the dining room, where we have a hard time choosing just one dish off a menu that featuresthe kind of Maine comfort food one needs on chilly evenings. I decide on the baked salmon over snow peas and Sam goes with the flat-iron steak that he tells me is “cooked to perfection.” So far, so good.

8:15 p.m. @ the Widowmaker Lounge
We walk over to the Widowmaker and take a seat by a window. We can’t look away from the carved runs as the trees become deep purple silhouettes against a glowing pink sky. As night falls, the snowcats’ lights are small distant beacons. They’re perfecting the snow for tomorrow, and for the first of many times on this trip, we come to understand that someone is always taking care of the mountain.

10:00p.m. @ Sugarloaf Mountain Hotel
It’s back to our cozy room so that we can be ready for a busy day tomorrow. The staff at the front desk nods at our decision.

8:00 a.m. @ D’Ellies
We meet our friends, Mac and Mattie, for breakfast at a place Mattie swears by. She has been coming to Sugarloaf since she was a kid, so we trust her opinion. We order breakfast sandwiches (some on English muffins, others on bagels) and the chef calls our names as we pick them up hot from the grill. We sit at a high top by the window, watching as a Santa suit goes by with others dressed in neon attire. As I listen to conversations around me, I quickly learn that this weekend is a tradition for groups of families and friends—and as the years add up, groups expand, packing lists grow, costumes are passed down, and funny stories pile up.

10:00a.m. @ Sugarloaf Outdoor Center
Outside the center, which sits on Moose Bog, we take in a view of Sugarloaf and the western mountains that reminds us how small we are in comparison. We pack water and snacks, and then we’re off snowshoeing well-maintained trails on a beautiful sunny day. Occasionally, we traverse over cross-country trails where we exchange hellos with jacketless skiers happily gliding along the trails.

1:00 p.m. @ Gepetto’s
We head back to grab some lunch at Gepetto’s, where we just beat the rush as a line forms out the door of skiers taking a break after a morning on the trails. The restaurant is casual, and tables are pulled together to accommodate large groups. I order the chicken Caesar salad, Sam gets the burger, and the waitress convinces us to embellish our lunches with half-priced housemade sangria, “it’s Reggae Fest after all,” she tells us.

2:30p.m. @ Narrow Gauge Pathway
A short ride takes us to another snowshoeing trail. We talk conditions with other snowshoers who explain they are good, but unfortunately, melting. We hurry onward, crossing a bridge that takes us to to the now-rushing dark-blue waters of the Carrabassett River. Ice chunks occasionally float by, reminding us of the river’s still-frigid core. We walk in the same direction as the river, stopping to gaze into the thick forest, take pictures, and throw snowballs into the rolling water.

4:30 p.m. @ the Beach at Sugarloaf
The Beach is located in front of the Widowmaker, at the base of the mountain. We stand in the sun, listening to the free live reggae show, which features Green Lion Crew, Royal Hammer, and CatchaVibe. Despite the chilly temperatures, we join the crowd in grabbing beers from the outdoor bar— exchanging money and cans from gloved hand to gloved hand with the bartenders. We talk with a couple who tells us they recently moved to the valley so they could ski all the time in the winter.

6:30 p.m. @ Sugarloaf Mountain Hotel
Our legs are tired from snowshoeing all day, so we join Mac, Mattie, and another friend, Cyndi, in the Jacuzzi. Many hotel guests have the same idea, but we all pile in and enjoy sinking our bodies into the warm water while our faces catch the cool breeze that blows down from the mountain.

8:00 p.m. @ Shipyard Brew Haus Sugarloaf
We catch a shuttle to the Shipyard Brew Haus, although we later discover that we could have either skied or hiked down from the hotel since it’s located under the Sawduster lift on the Birches Trail. Inside, the atmosphere feels authentically ski lodge with dark wood and dozens of mugs on display up over the bar. Mattie and Mac rave about their salads and we all devour spinach and artichoke dip in a bread bowl, fulfilling the hunger that comes from a long day of activity outdoors.

9:30 p.m. @ Sugarloaf Inn
While it’s not reggae music, the Sugarloaf Inn is hosting North of Nashville. The two-man new-country band plays tunes to an enthusiastic audience that two steps in pairs.

10:00 p.m. @ the Widowmaker
Back at the Widowmaker, the feature show of the weekend takes the stage. Neon lights fill the lodge packed with the reggae lovers. Iration plays to a sold-out crowd.

12:00 a.m. @ Sugarloaf Mountain Hotel
After the concert the crowds leaves the Widowmaker, emptying into a silent resort. We hit the hay back at the hotel, resting up for another day of fun on the mountain.

8:00 a.m. @ Sugarloaf Mountain
On our last day, the weather breaks from yesterday’s warmth and sun, reminding us that we are still within the reach of a northern winter. Snow falls from an overcast sky, and the summit is covered by clouds.

9:30 a.m. @ Java Joe’s
We fill up on muffins and lattes from Java Joe’s. Mattie bumps into her childhood ski instructor and they plunge into stories from years past. It must have been very special to be able to grow up coming to a place like this—where relationships are forged and outdoor adventures are part of everyday life.

10:30a.m. @ Sugarloaf Mountain
Mattie and Mac take on King’s Landing Trail, which is Mattie’s favorite because it’s long and winds down the mountain. I settle on Lower Timberline, which is a much easier run. The first run was carved in the 1950s. Today, the mountain has
60 miles of skiable terrain, with a good mix of easy, intermediate, and advanced trails.

2:00p.m. @the Bag and Kettle
We have a late lunch at the Bag and Kettle restaurant and regroup to talk over our favorite trails and lookout points. Skiers unwind with a beer and swap stories about the day’s rides.

3:30 p.m. @ the Downhill Supply Company
I head into the ski shop to see if I can find anything to remember my trip by. The store sells ski clothing as well as an array of colorful boards and skis that kids call their parents over to—a hint for next year’s Christmas. At the end of the season, many items are on sale, and I decide on a Sugarloaf sweatshirt, which features the mountain’s snow-covered peak.

5:00 p.m. @ Sugarloaf Mountain Hotel
It’s time to head home. We’re happy that we really made the most of our weekend. We leave with sore muscles, but mostly stories and reminders of how beautiful and satisfying a weekend spent in the outdoors can be.