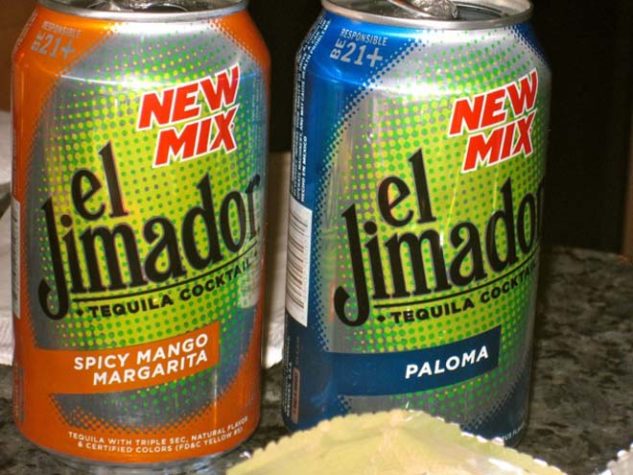 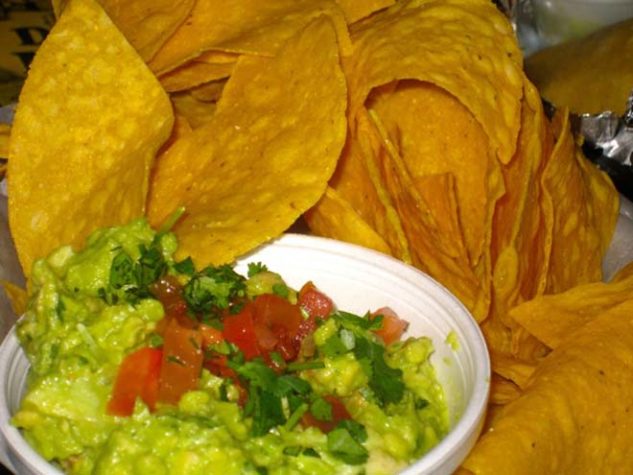 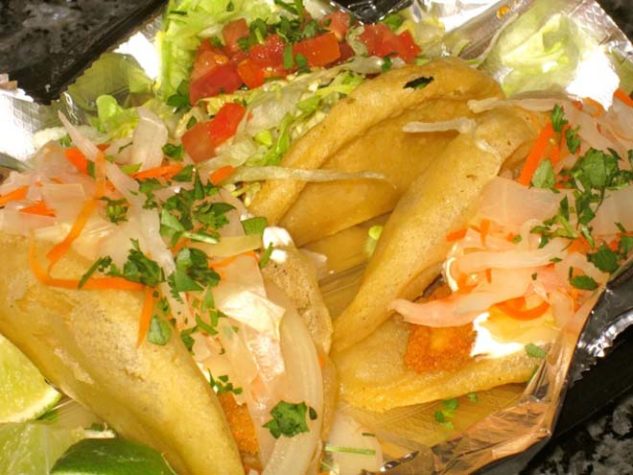 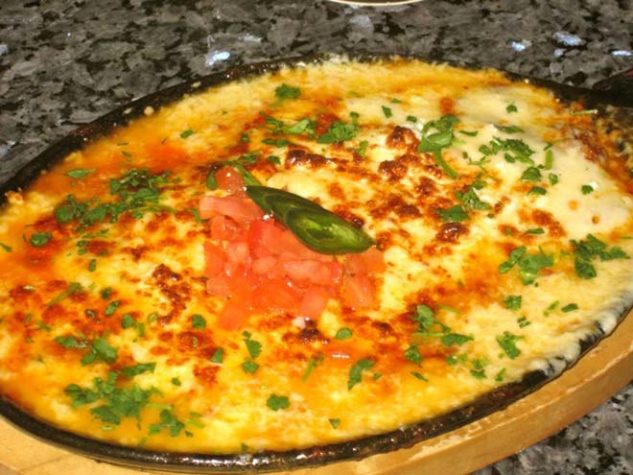 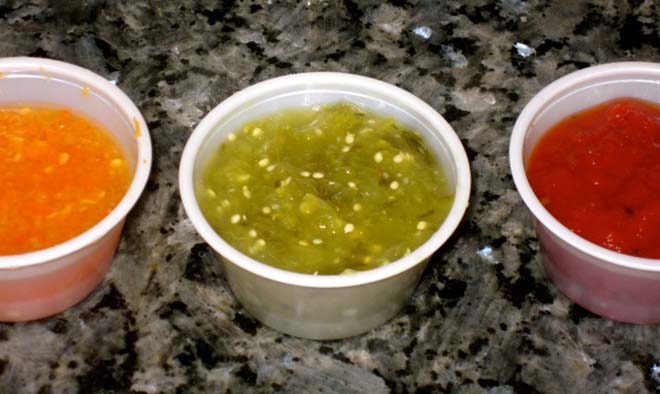 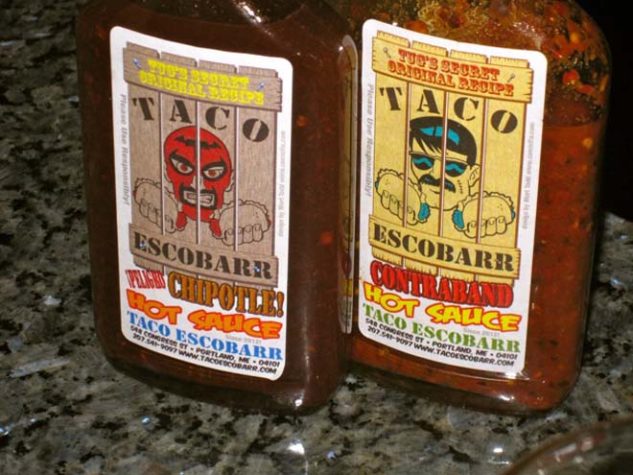 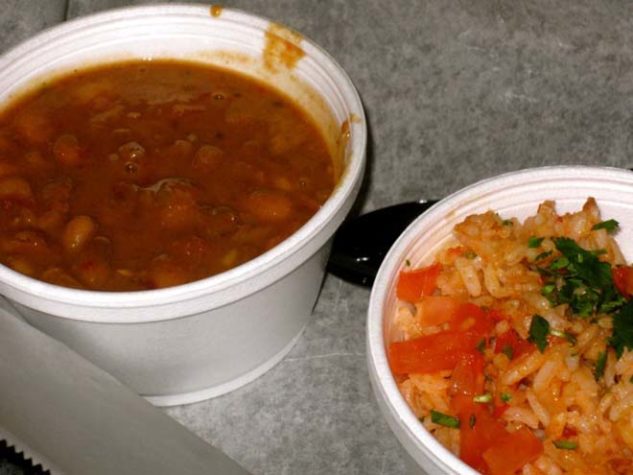 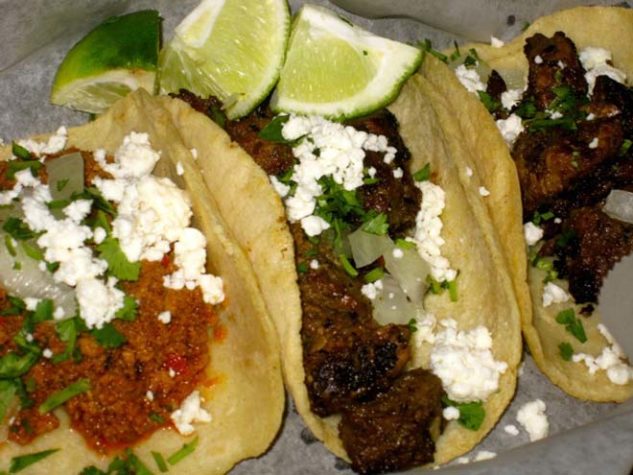 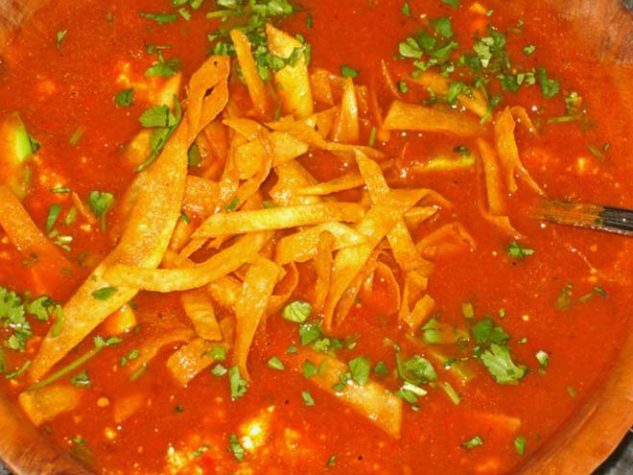 Growing up in Texas and spending a fair amount of time in Mexico, chef Steve Tuggle of Taco Escobarr understands the proper method with which to marry the flavors of these two highly complementary styles of cuisine. His goal, as he describes it, is to make food that tastes like “home.”

Some Americans consider Tex-Mex to be Mexican food, but there are a multitude of differences between the two. The ingredients are quite similar, but rather than emphasize the traditionally rustic and earthy flavors of Mexico, Tex-Mex is infused with the bold, colorful, and larger-than-life personality of Texas. The end result is, to employ a wildly overused but useful chain-restaurant term, a truly “craveable” cuisine.

The work of well-known artist Mort Todd adorns Taco Escobarr’s colorful walls in the form of various montages featuring Mexican Lucha Libre wrestlers. I assume this theme has been chosen to instill strength in those about to tear apart an inhuman amount of tacos. An elongated bar dominates the small dining room, with an open kitchen situated towards the back.

I commonly find myself at Taco Escobarr in the later hours of the night, grazing around the menu while sipping Gran Centenario Rosangel tequila, a beautifully aged reposado that has been infused with hibiscus flowers to impart a fragrant characteristic and a dreamy pinkish hue. On this particular evening I intend to make the food my primary focus and show up at a reasonable hour. I order a single (albeit larger-sized) bottle of the Lowrider Ale from Mexican craft brewery Cucapá. Much heftier than most Mexican beers, this “double rye” has nice citrus and caramel notes and a slightly higher alcohol content, making it a perfect drink choice when it will be your only one.

We begin with guacamole, prepared in the traditional manner using rich, buttery avocado, finely sliced jalapeño, onion, lime, and cilantro, garnished with diced tomato and served with a mountain of warm tortilla chips. It is, because I can think of no other way to describe it, just as it should be.

Hot sauces are all made in house, and diners are given options based on the level of heat desired. The mildest sauce is a blend of tomato with both poblano and jalapeño peppers. Located a few steps up the ladder, but still perfectly bearable, is the salsa verde, made with tangy tomatillo, poblano, jalapeño, and serrano peppers. The “Stupid” sauce is exclusively produced from fiery yet fruity habanero peppers, its flavors elevated simply with garlic and lime. Lastly, two bottled offerings: Peligro Chipotle, for those who like a little smoke with their hot and Contraband, which is made with chili de arbol and imparts a slow, lasting burn that builds to a crescendo following excessive consumption.

Though every soup I have had the pleasure to taste at Escobarr is delightful and perfectly seasoned, I particularly enjoy their version of classic Tortilla. The rich, smoky chicken and tomato broth, flecked with dried ancho and guajillo chilies, is brightened with a squeeze of lime, a showering of cilantro, and tangy, salty queso fresco. Slices of avocado and strips of crispy tortilla chip add even more texture and interest to the overall package.

Queso Fundido, a sizzling iron skillet of melted Queso Chihuahua topped with herbs, tomato, and jalapeño, comes with a choice of filling. We opt for the spicy and aromatic Chorizo sausage, which Tuggle describes as more of a “northern style sausage, made with garlic, clove, nutmeg, and ancho chili.” Another pile of chips is served to scoop up the cheese in all of its browned, bubbly, and mouth-burning glory.

Now begins the opening salvo of tacos. Fish tacos are, in my opinion, at their best served in the “puffy” shell—a San Antonio staple that involves pressing out a disc of masa and then deep-frying it. This provides a wonderful little cloud of fried goodness for the Wondra flour battered Hake, crunchy pickled cabbage, and my choice of “Stupid” habanero sauce, which I apply in increasingly large amounts.

We then transition into what I consider to be one of the best chicken tacos in existence. It has tender thigh meat braised in earthy, smoky chipotle, which is shredded before being loaded into the puffy shell. I am also quite partial to the braised ancho chili pork shoulder too. It reaches its full potential when served in the “crispy” shell, meaning the taco has been filled and pressed on a well-seasoned cast iron griddle.

In between tacos I sample various sides, including pinto beans prepared “cowboy style”—simmered low and slow with meaty pork shoulder, smoky bacon, and six different varieties of dried chili. It’s the kind of hearty, stick-to-your-ribs dish that would make even the most hardened cowboy, such as Emilio Estevez in Young Guns II, mellow out.

Beef sirloin for carne asada is marinated for several hours with olive oil, lime, garlic, and charred jalapeño, before being char-grilled and sliced. We enjoy it on a soft, warm corn tortilla, topped with chopped white onion, cilantro, and queso fresco. This presentation is more traditional than a Mexican street vendor. Among other standouts is the vegetarian taco of the evening, mushrooms and Swiss chard. It’s folded into the crispy shell with a liberal amount of melted cheese—a perfect vessel for the Peligro Chipotle sauce. There are some people who may argue that mushrooms are not actually a vegetable, but a fungus. I would urge those people to take several breaths slowly in through their nostrils and out through their mouths, before moving on to more engaging topics of discussion.

Somehow, I allow myself to be convinced that there is no dessert more perfect than a taste of two cans of El Jimidor New Mix ready-to-drink tequila cocktail. The first flavor, Paloma, tastes like boozy Fresca and though I do not personally drink soda, I will admit that I have always been partial to Fresca. The second, Mango Margarita, is less successful. It reminds me of boozy Tang fruit-flavored breakfast drink, and conjures up images of intoxicated astronauts.

Tex-Mex, much like great barbeque, is one of the most satisfying styles of American cuisine in my mind. Taco Escobarr is a perfect haven for those seeking bright, bold, and spicy fare that is both filling and satisfying—and even for those who simply want a boozy Fresca.