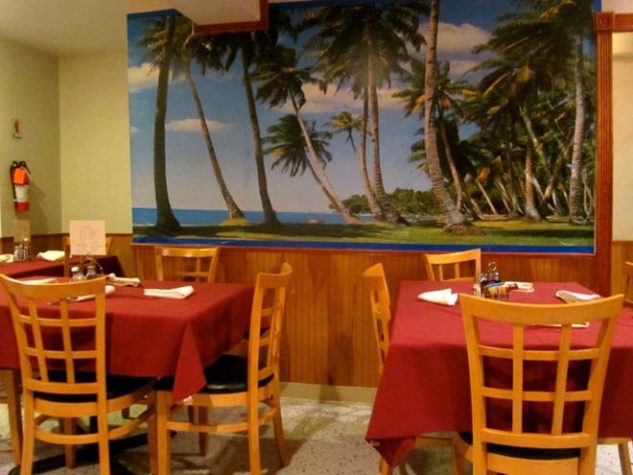 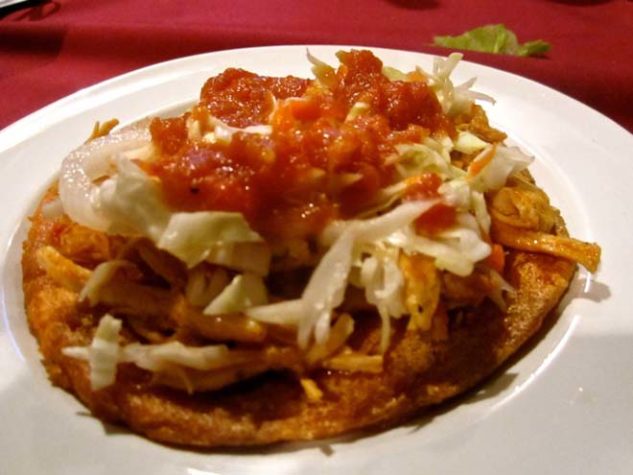 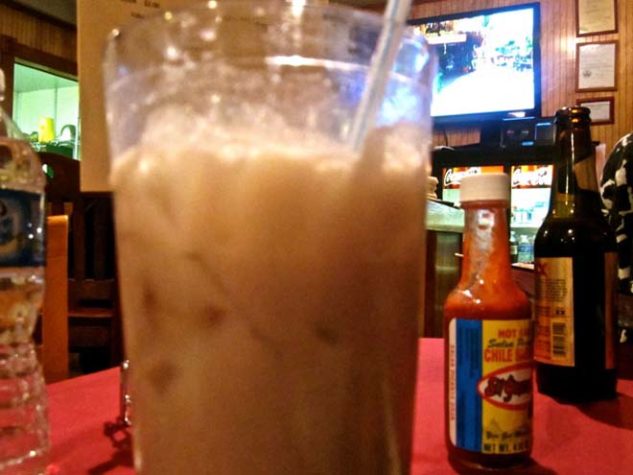 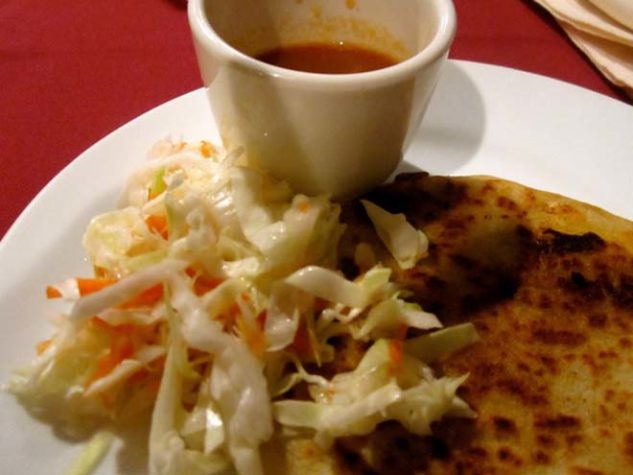 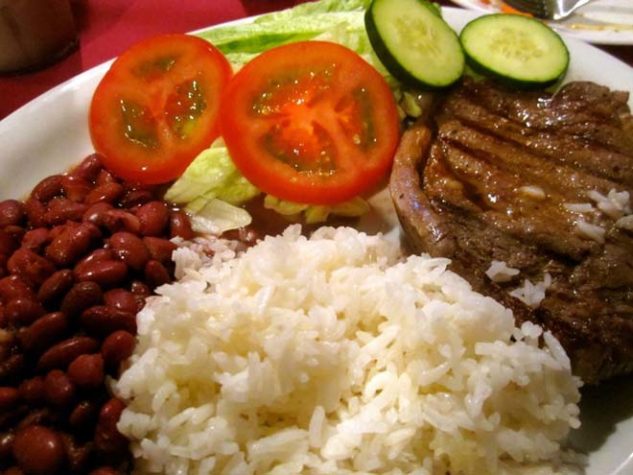 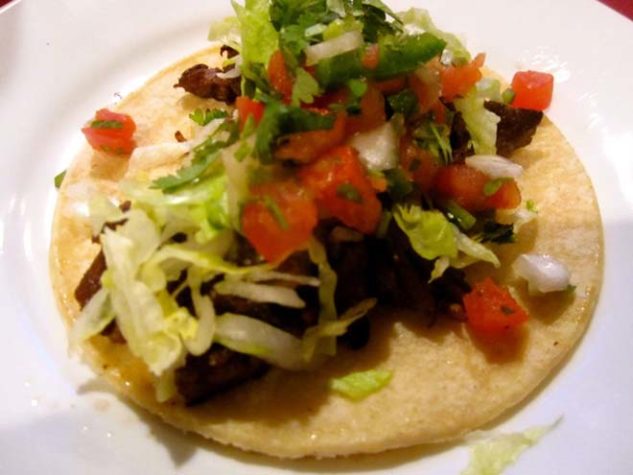 The decor at Sabor Latino is everything I expect and desire from a casual Latin American restaurant—it’s brightly lit, sparsely decorated, and dominated by a large, Scarface-esque mural of palm trees blowing in the tropical breeze. It is not often that I visit an establishment within its first week of opening, but I adore this style of cuisine so much that I throw caution straight to the wind and prepare myself for the normal ups and downs of any fledgling eatery.

Salvadoran and Mexican fare dominate the menu, with the Cuban influence manifesting in the sandwich bearing the same name. Soon after I sit at a table for four towards the front of the dining room, adjacent to both the bar and the large television tuned to the Travel Channel, a teenage waitress takes my order for a large horchata, a refreshing rice milk beverage spiked with cinnamon. This is my go-to on the rare occasions when I am not imbibing, though I have to admit I am tempted by the option of a piña colada, which I don’t actually consider to be a real “drink” either.

At this point the owner, Jaime Guevara, comes out of the kitchen and randomly introduces himself to me, instructing me to make myself at home and let him know if I need anything at all. As he moves on to greet other tables, I begin to place my order with the server. They are out of loroco, a tropical vine flower bud, for the pupusas, so I settle for revueltas, the pork and cheese variety of this Salvadoran staple, which is basically a stuffed corn tortilla. At least one taco is also in order, so I select carnitas, slow cooked pork, after being informed that they are fresh out of beef tongue. Lastly, the plato tipico montanero, Columbian dish steak, sounds intriguing, so despite the fact that I have no idea what a dish steak is, I roll with it.

A few minutes later, Jaime approaches again to explain that, due to being out of chicharron, he couldn’t properly prepare the dish steak, so I happily opt for the Rib Eye instead. I am, however, intrigued by a steak served with fried pork rinds, and decide that I must return to taste it.

At this point a few friends unexpectedly join me, which is comforting because I am beginning to feel mildly idiotic sitting at such a large table by myself, making futile attempts to be discrete about snapping photos. My newly acquired dining companions order a round of beers, taking note of my choice of beverage with curiosity. Suddenly I am thankful to have resisted the urge to drink a piña colada, not wanting to admit I have to some kind of secret drinking life previously unbeknownst to them.

The pupusa is joined on the plate by curtido, a lightly fermented cabbage salad that is the traditional garnish, and a mild, earthy sauce, made on premise. The flavors work nicely together, though I prefer pupusas to be a bit crispier on the outside and richer and meltier in the cheesy center.

Though I had ordered a carnitas taco, when it arrives it looks more like beef. I ask the waitress if it is pork, to which she replies “yes.” The first bite confirms my initial suspicion, but I let it slide. The taco is put together properly, wrapped in two warm, soft tortillas and topped with crunchy lettuce, raw onions, cilantro, and tomato. The beef itself lacks flavor, but I’m sure problem will be remedied once the griddle in the kitchen has been properly seasoned from repeated use. In the meantime, dousing the taco in fiery El Yucateco habanero sauce ties everything together just fine.

Due to staggered arrival times, I am receiving food before my newly acquired companions, so when my Rib Eye hits the table I order one more item, the enchiladas Salvadorenas with chicken, to keep my dining experience in parallel with theirs.

My steak is perfectly salted and intensely flavorful, cooked medium with a good amount of crispy fat around the edges. The rice on the plate is completely lacking of flavor, but this is easily remedied when mixed in with the boldly seasoned beans, flecked with spicy chilies. A small iceberg salad tempers the heat and adds crunch. Despite that fact that the thinner cuts of meat most Latin restaurants favor are often served on the well-done side, I’ve always been partial to the way seasoning permeates the entire steak.

Just as I take the last bite of my lettuce, Jaime comes rushing out of the kitchen with three large jugs of Wishbone brand dressing, apologizing that we have not been offered this for our salads. Everyone politely declines the offer, and I exercise self control despite wanting to explain how much better Hidden Valley Ranch is than Wishbone.

The crispy, chewy tostada that serves as a base for my Salvadoran enchilada is damn near perfect, holding a pile of tender chicken, crispy cabbage, and chilies, all liberally covered in a smoky house sauce. I am very happy to have added this one last minute, as it’s simply fantastic. As everyone finishes up and sorts out the bill, Jaime enthusiastically lays out his plans for the restaurant, which include eventually staying open until 1:00AM, and encourages any kind of feedback and insists that we come back soon.

This speech is unnecessary, as I will definitely return in hopes of sampling the variety of soups (only served on weekends), the chicharron, tongue tacos, and of course, the Cuban element. This is a small, family run establishment that, in its first week of being operational, is a welcome addition to the Latin American food scene here in Portland.