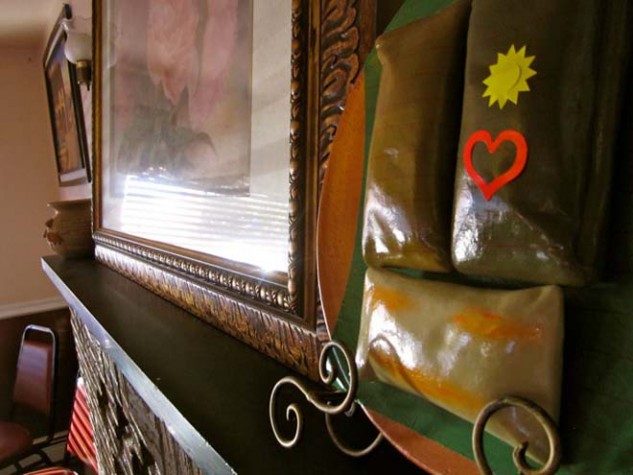 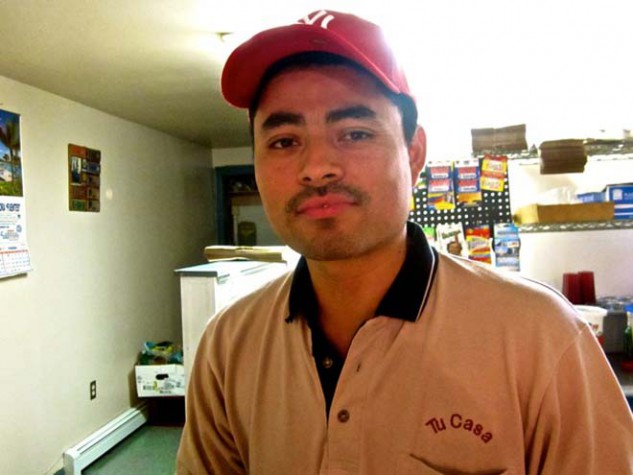 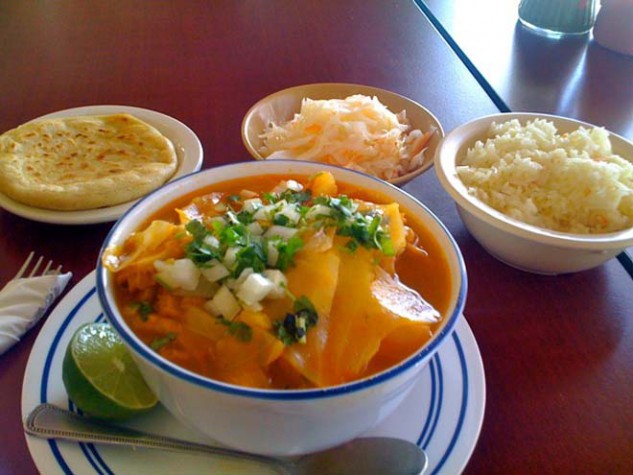 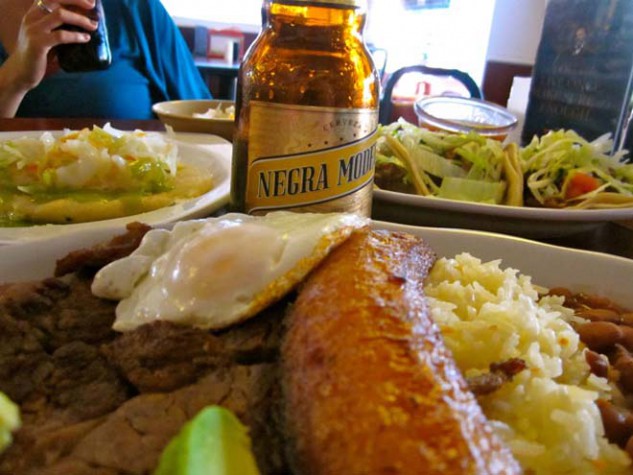 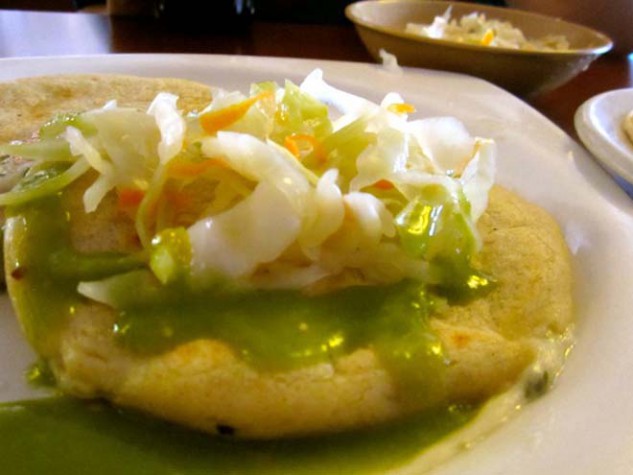 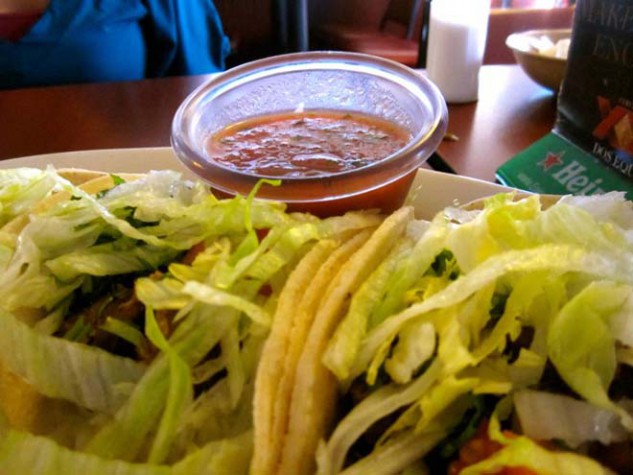 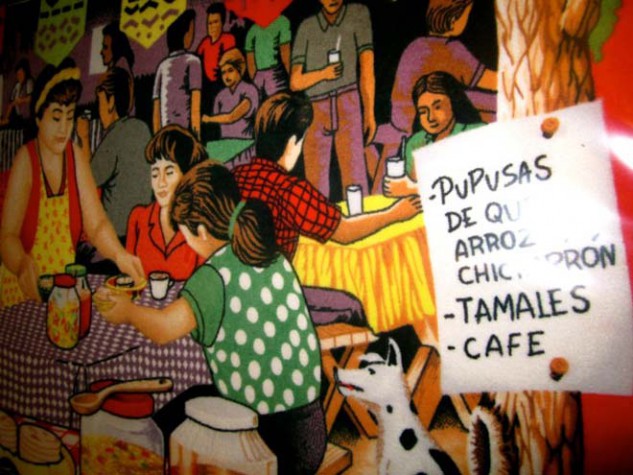 Latin soap opera is far more entertaining when you can barely understand a single word. I reach this conclusion while quietly watching the television in Tu Casa’s dining room, sipping on a Negra Modelo lager and awaiting the arrival of my Plato Montañero.
The “Mountaineer’s Plate,” consisting of a grilled rib eye, fried egg, avocado, beans, rice, and a fried plantain, is quite possibly one of the most satisfying meals I have ever encountered in the city. Though the rib eye is always cooked well done, it is intensely flavorful and salty, and when combined with the sweet plantain, creamy avocado, and over-hard egg, it makes for a perfect bite of food.
Originally billing itself as a pupuseria, Tu Casa opened for business on the East End in the fall of 2000. Pupusas are a staple in traditional Salvadoran cuisine, consisting of a thick, handmade tortilla filled with a melting cheese called Quesillo and cooked on a griddle until bubbly and browned. Tu Casa serves two varieties, one with cheese and loroco, a vine flower bud from Central America, and the other in a style called revuelta, stuffed with minced pork. Each is accompanied with a tangy, slightly fermented cabbage slaw called curtido, in addition to housemade red and green chili hot sauces that can vary in heat on different visits.
After regularly dining at Tu Casa for eight years now, I have witnessed many changes in the restaurant itself but never with the quality or consistency of the food. Up until about three years ago they were without a liquor license and as a result allowed for BYOB. Over time, they have expanded the dining room to over double its original size, as well as sprucing up their outdoor patio. They have even added photos to their menu, which has been expanded, though all of the original selections remain intact.
Certain elements will never change, such as the long waits for food and the sparse decor. You help yourself to soft drinks, such as Jarritos soda or bottled water, from the cooler, go to the counter when you are ready to pay your bill, and refrain from attempting to convince them to modify the food. All of these things act as an important reminder to relax and enjoy the experience for what it is—a small, family run operation that serves outstanding and inexpensive Salvadoran fare.
Taquitos de lengua, tongue tacos, come three to an order, wrapped in two warm corn tortillas, topped with diced onion, tomato, cilantro, and shredded lettuce, with house-made tomato salsa on the side. The tongue is braised until fork-tender, offering superb textural interplay with the crunchy toppings.
To make things mildly confusing, Tu Casa also offers “tacos” on the menu, but these are actually more like an unwrapped burrito, served one to an order on a large flour tortilla. It is also worth noting that they roll up the taco when you order it to-go, melding the flavors together and enhancing it overall. Another potentially misleading area of the menu is the enchiladas, offered both as enchiladitas, rolled corn tortillas slathered in brown mole sauce, and enchilada Salvadoreña, served on two sublime crispy-fried tostadas. All tacos, taquitos, enchiladas, burritos, and quesadillas are available with beef, chicken, tongue, or veggies.
Menudo, a comforting stew of braised tripe, boiled yuca, corn, and a spicy tomato broth, is an ideal excuse to visit on Sundays. It is showered with chopped white onion and cilantro, joined by a lime wedge and a bowl of white rice on the side. There is something extraordinary about the rice at Tu Casa—it achieves a very pleasing stickiness and flavor, due to a method perfected over a very long time.
Though tripe is only available on Sunday, the same stew is offered with oxtail or chickenthroughout the rest of the week, with the exception of Saturday, when they are closed for religious reasons. Other standouts on the menu include the pescado frito, whole, fried tilapia accompanied by beans and rice, and platanos fritos, fried plantains complimented by a mind-numbingly good dipping sauce of Salvadoran crema.
For many Portlanders, none of this information will come as any kind of surprise. Owner Luis Rodreguiz and his family already have legions of devoted followers in this town, and I simply seek to shed yet more light on what their hard work for over a decade has produced. I have also found that many people who go to Tu Casa, after hearing about it but not really knowing what to expect, tend to miss some of the stronger dishes in favor of more familiar items, like quesadillas.
If I could only find a beach towel of my own resembling the one they’ve got proudly displayed on the dining room walls, depicting happy cooks and customers in a bustling pupuseria, I would truly feel complete.
Tu Casa Restaurante Salvadoreño | 70 Washington Ave. | Portland | 207.828.4971