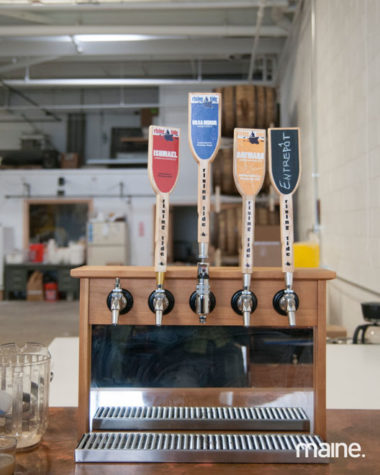 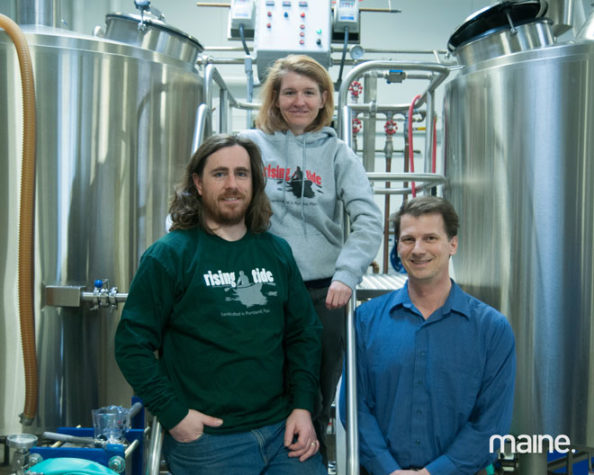 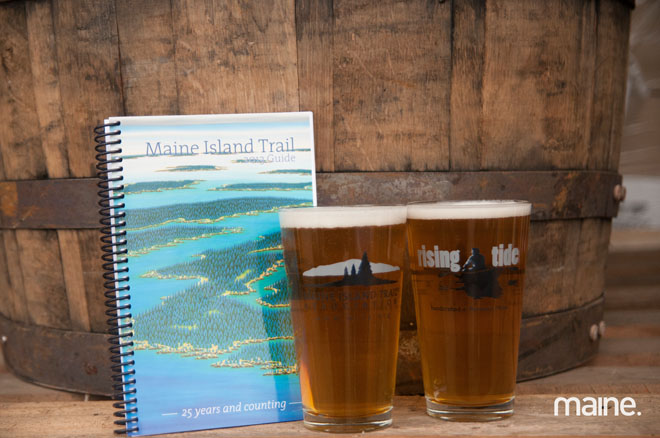 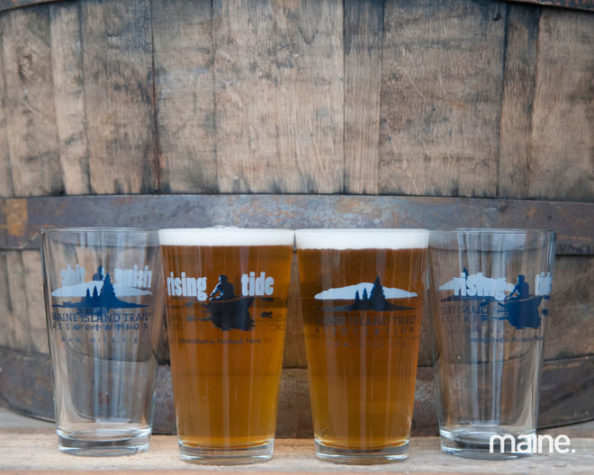 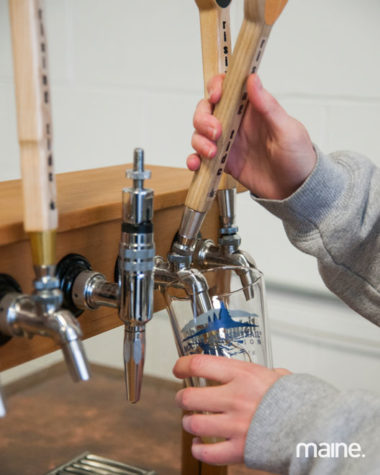 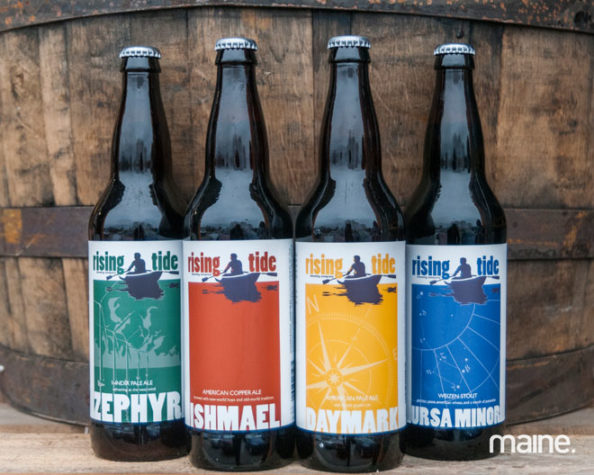 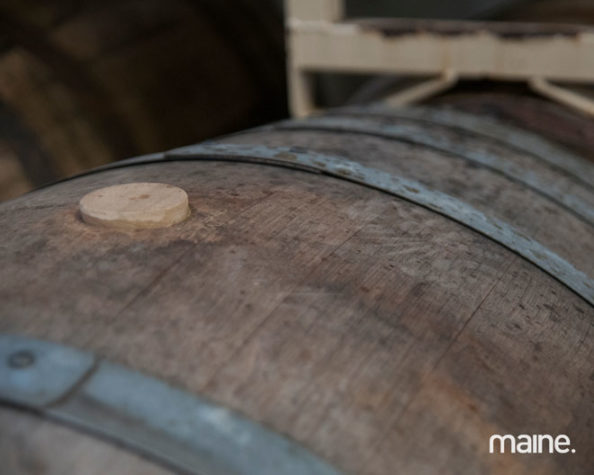 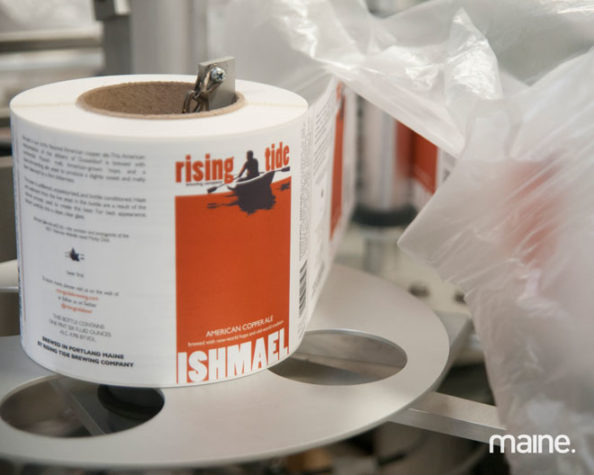 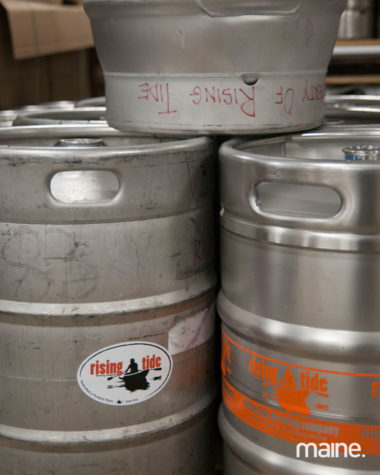 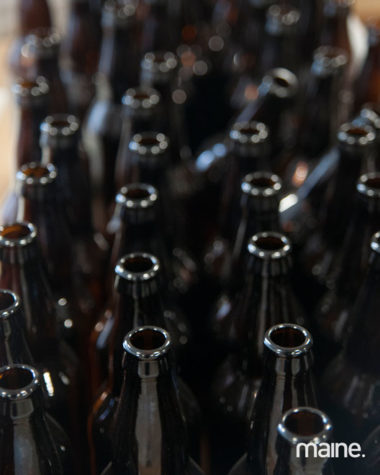 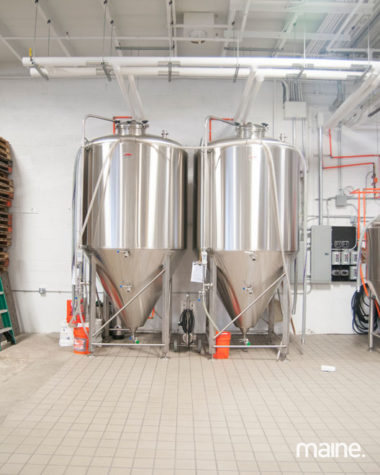 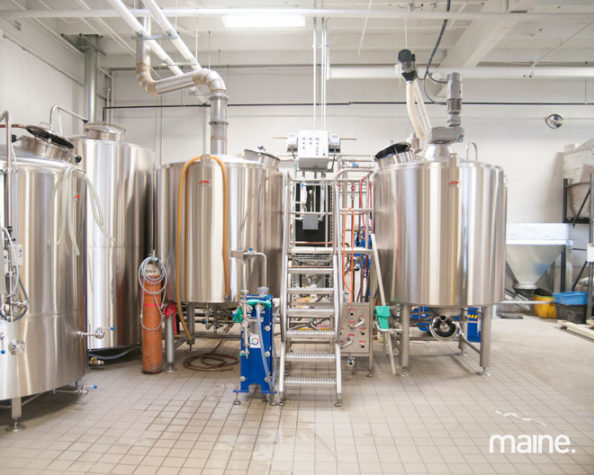 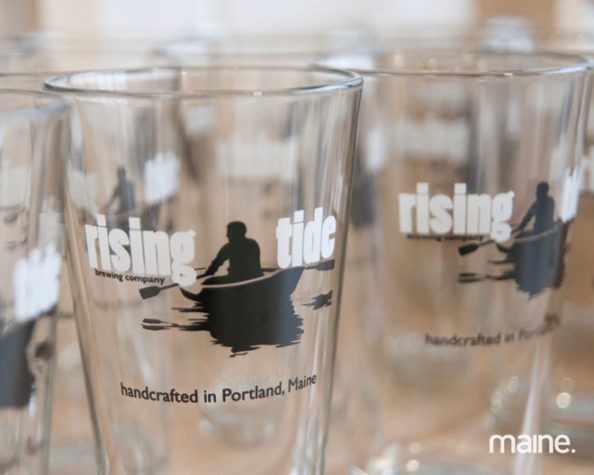 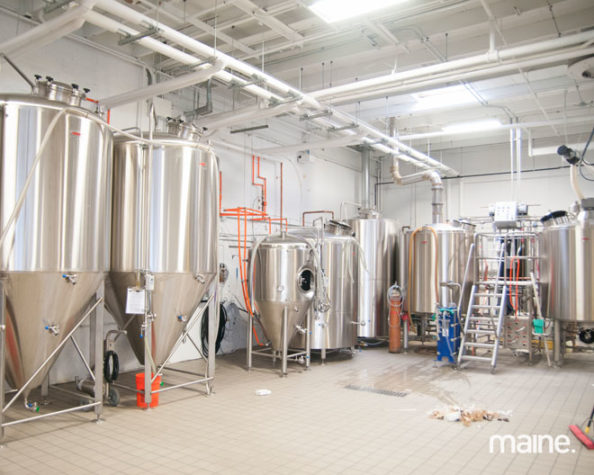 It’s Friday afternoon at Rising Tide Brewing Company. There’s a game of cornhole set up outside, a group of people on a tour, and another group tasting beer. Inside, the vibe is laid back and casual. This is a great place to slow down and ease into the weekend.

But for husband and wife co-owners Nathan and Heather Sanborn, there’s no slowing down. As Director of Business Operations, Heather focuses on marketing, promotion, social media, and everything it takes to run a small business. Nathan is the head brewer, constantly producing the core group of Rising Tide beers as well as a series of small batch, seasonal, craft brews. This summer, Nathan has created a light, refreshing beer called the Maine Island Trail Ale.

Heather says the Maine Island Trail Ale is a session pale alea beer with a low alcohol content, “so you can have a whole session of drinking.” It’s light, crisp, and hoppy with a hint of pine and citrus. “It’s the type of beer that will taste great after a day of paddling on the ocean or while camping on an island off the coast of Maine,” she says. “It’s something that’s refreshing and light and crafted with an eye toward some of those flavors that make you think of Maine.”

The Maine Island Trail Ale is more than just a special release or private label beer; it’s representative of a long-term partnership with the Maine Island Trail Association, a membership organization celebrating its 25th anniversary this year. MITA looks after the islands and public and private land along the 375-mile water trail on the coast. They teach boaters, visitors, and volunteers about sustainable island practices, they maintain the islands, and organize clean-up days.

Although the couple doesn’t often participate in sponsorships or requests for private label beer, they believe in MITA and their mission.

“Nathan and I both grew up on the islands, and on boats, and on the coast of Maine. It’s a huge part of who we are,” Heather says. “There’s no other place that could be home because of our connection to Casco Bay, honestly.”

Doug Welsh, MITA’s executive director, agrees that the partnership is a perfect match. When looking for a local brewery to work with, Welsh explains that Rising Tide was an obvious partner.

“It was instantly clear to me that Rising Tide understood what we were about, was in a similar place in their growth as a company, and we were right in sync with them,” Welsh says. “Even the name and the logo are fitting.”

As Heather walks me through the beer making process, it’s clear that science plays a major role in producing a final product. Everything is measured, sterilized, and calculated to perfection. But, there’s also an imaginative playfulness at work. The names of the beer are references to weather patterns, celestial bodies, nautical terms, and classic literature. Flavor combinations include smoke, cherry, coffee, malt, citrus, and pepper. It takes imagination to create these beers, a talent that reaches beyond science. At one point Heather compares Nathan’s ability to create recipes to composing music. “I think of it like writing a song. You have an idea of what you want it to sound like, and as you tap out some notes you get a sense of how it all comes together… Nathan has that ability to conceive of a recipe, and then understand how the ingredients will come together in order to create that flavor in a beer,” she says.

I don’t know how he does it, but I love the result.

During my visit I learn that during the brewing process, each beer gives off its own distinct scent, filling the warehouse with odors of bananas, pine, citrus, or other yeast producing smells. I learn that that adding dry hops to cold beeras is the case with the Maine Island Trail Aleadds an aromatic quality without any bitterness. And I also learn that Heather and Nathan believe in sustainability and locally sourced ingredients. They work with Resurgam Zero Food Waste, a Portland-based composting company, to reduce their waste, and use locally grown barley. Their rye is malted in Massachusetts, and Down Home Farm in Cape Elizabeth uses their spent grain. Furthermore, their boxes are manufactured in Biddeford.

Heather and Nathan are providing an ale for everyone to enjoy this summer while supporting a cause they believe inraising awareness for MITAand creating long term partnerships with local businesses. They can be found at the brewery on Fox Street most days, and are available for tours at 1 p.m. and 2 p.m. on Friday and Saturday. The tasting room is open Tuesday and Thursday from 4 p.m. to 7 p.m. and Friday and Saturday from noon to 5 p.m. Visit their website for extended summer hours and updates. For additional information about the MITA and how you can help, visit mita.org.