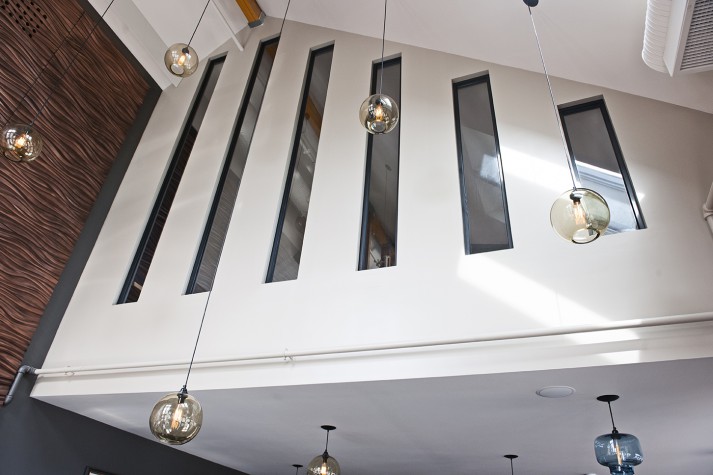 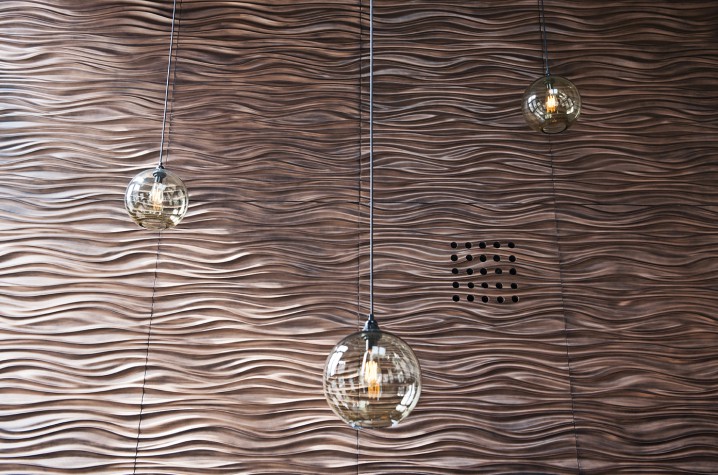 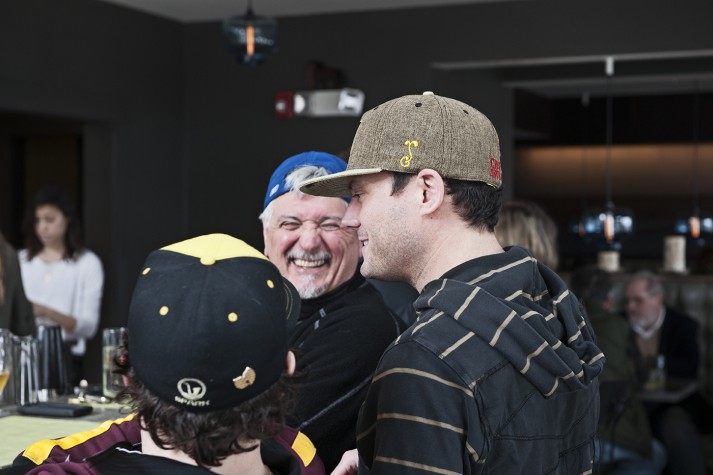 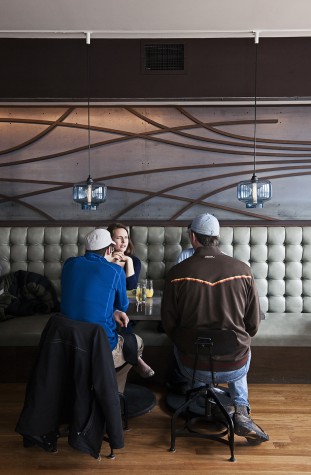 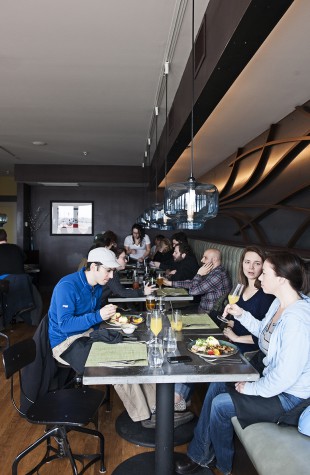 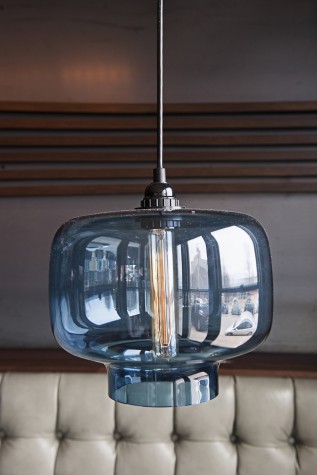 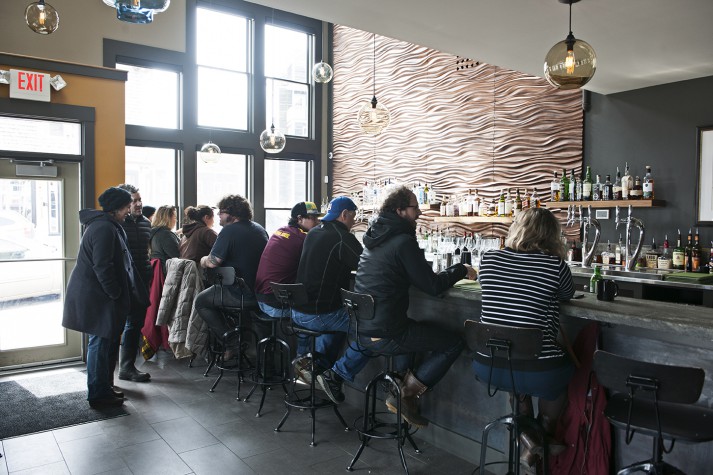 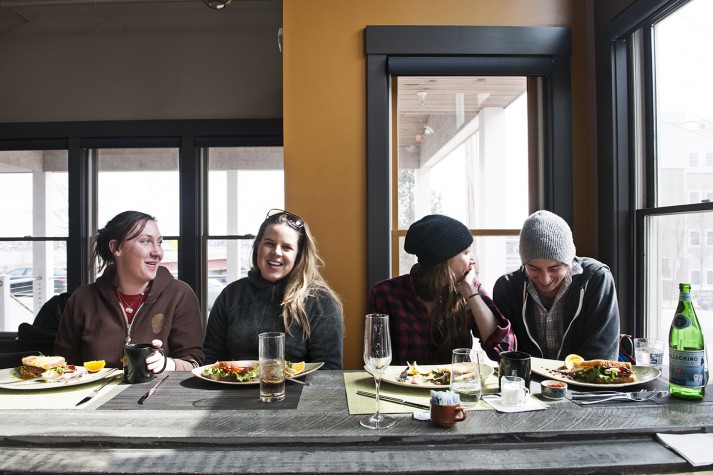 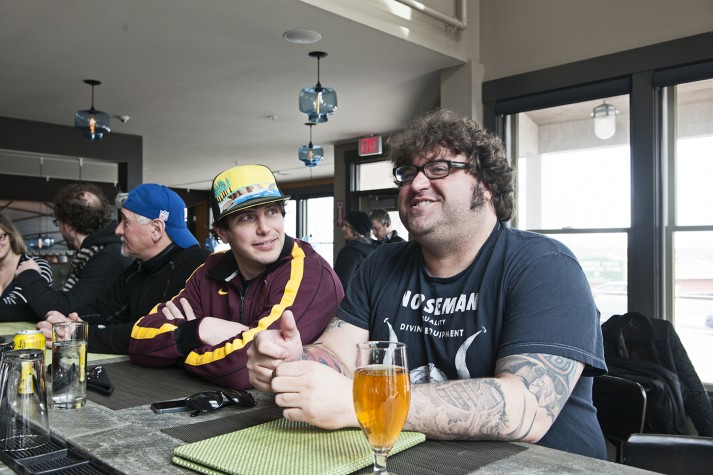 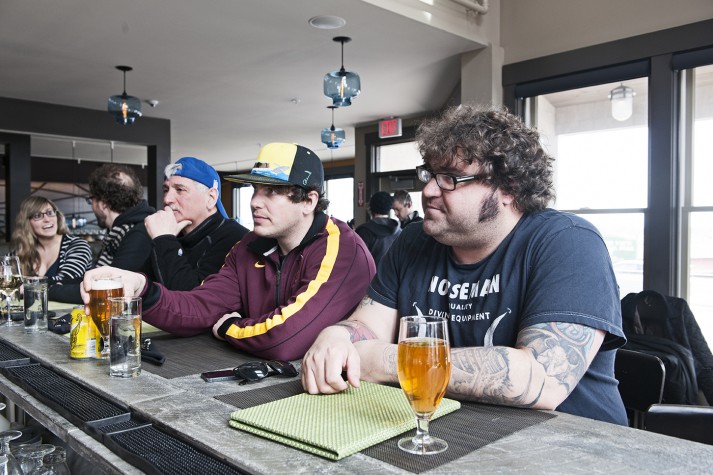 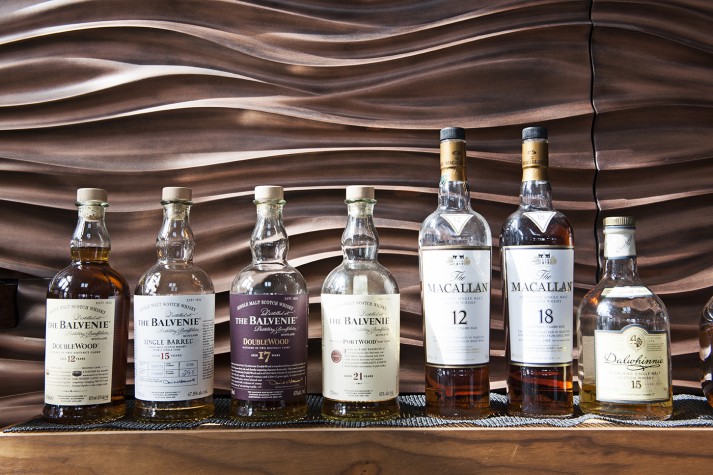 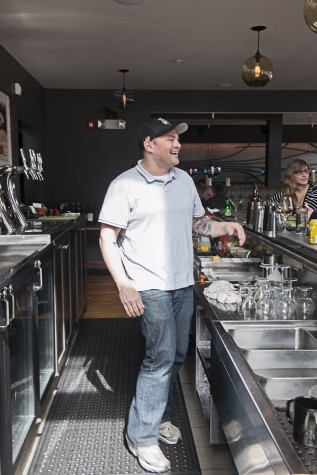 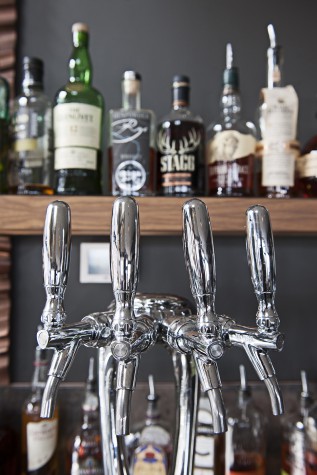 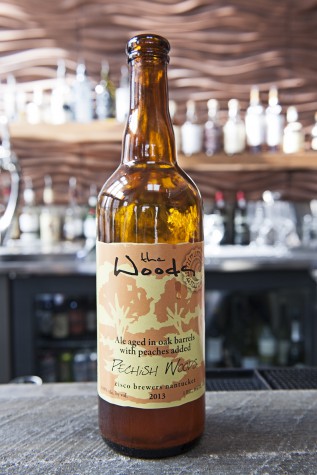 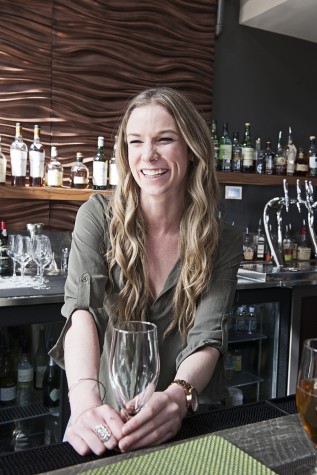 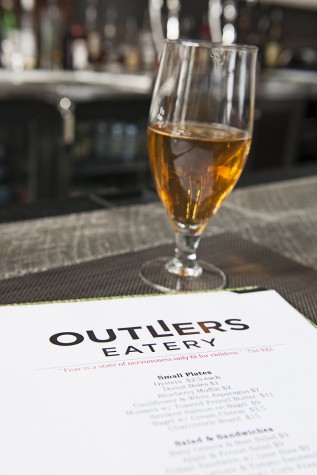 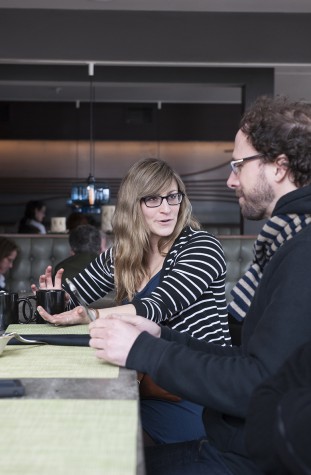 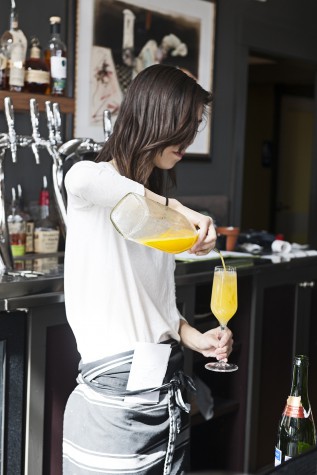 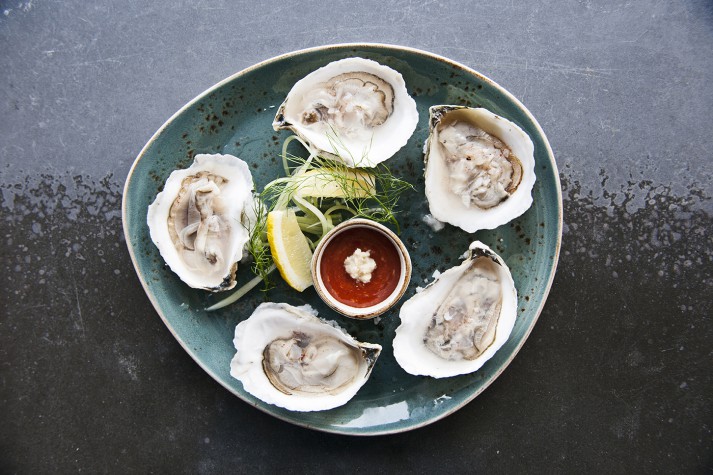 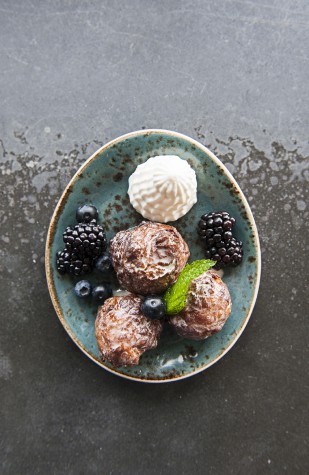 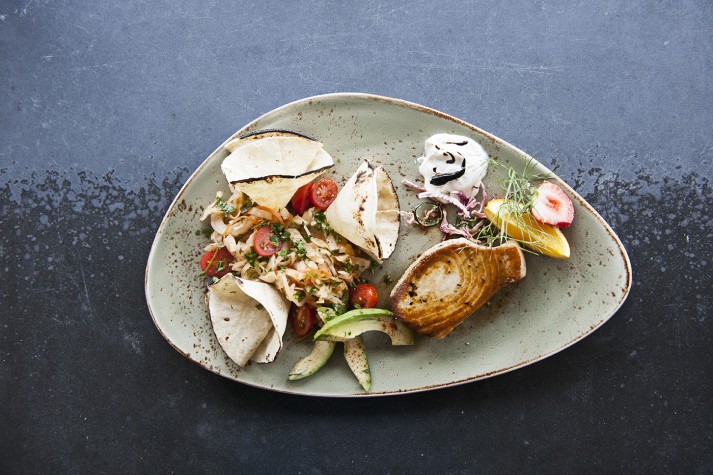 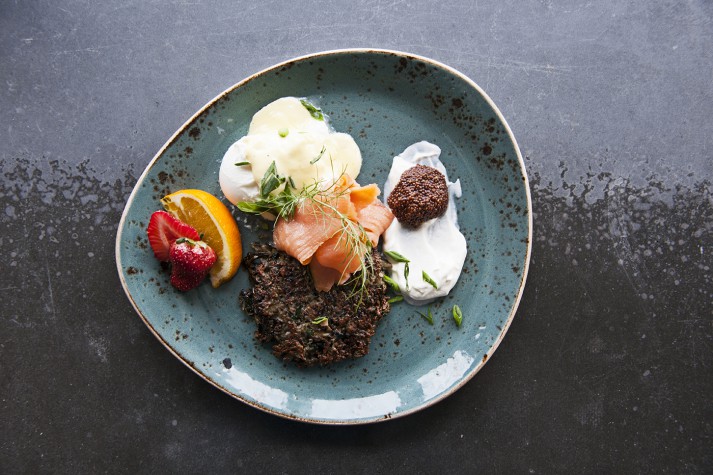 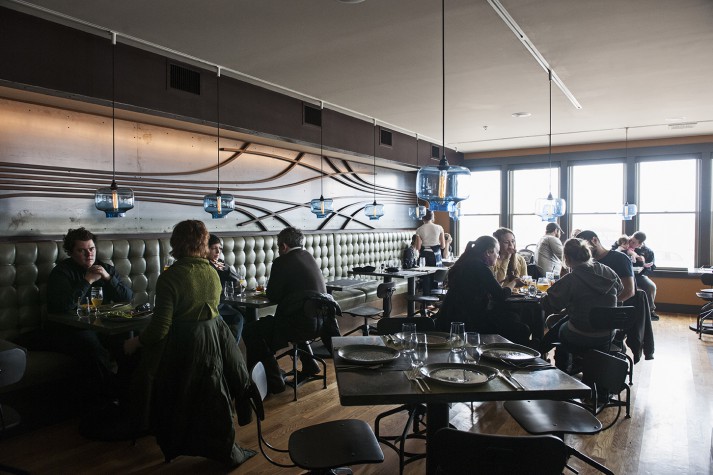 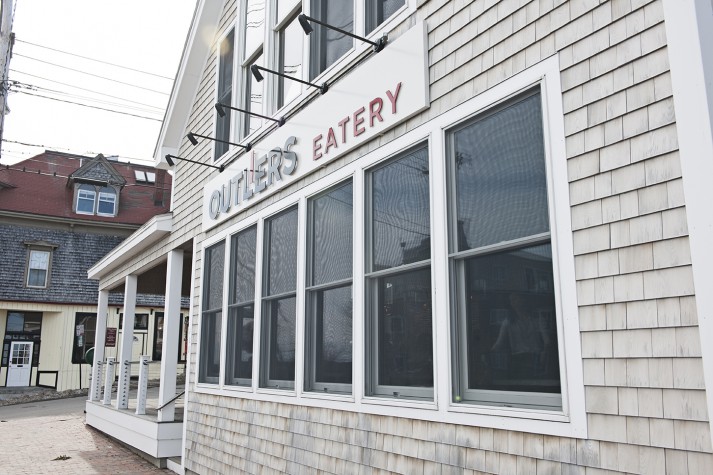 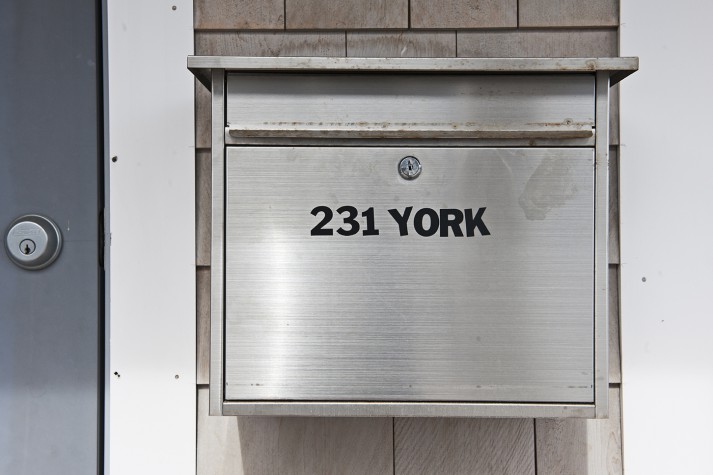 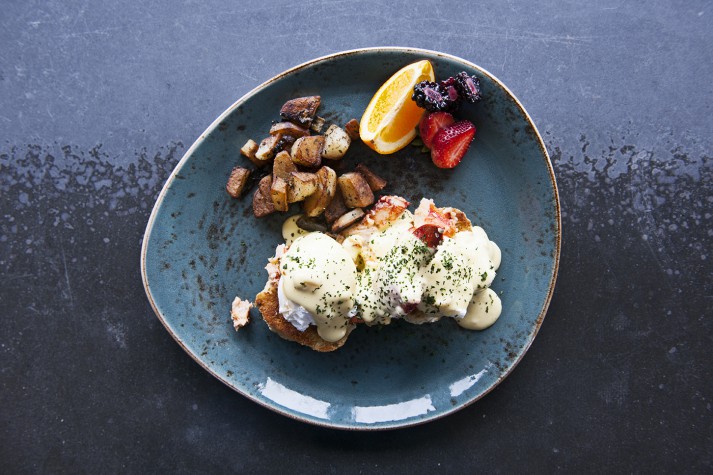 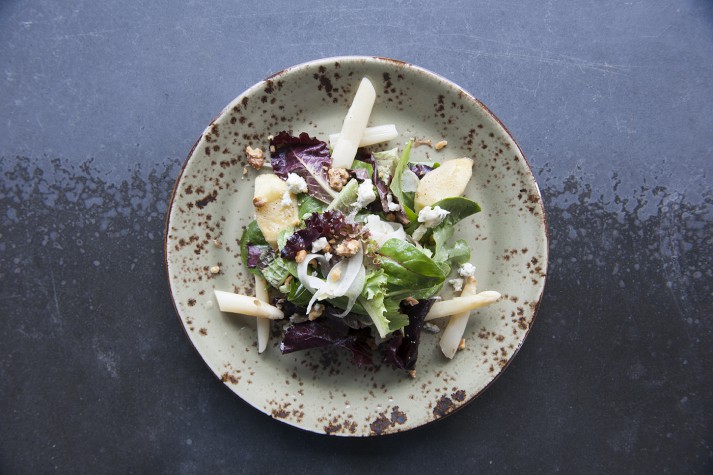 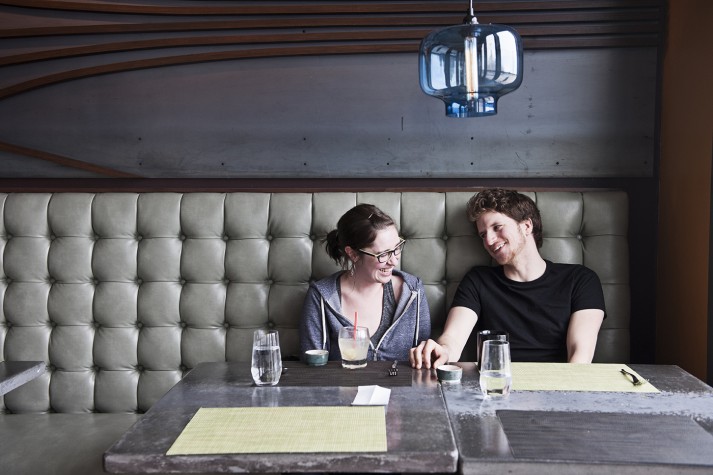 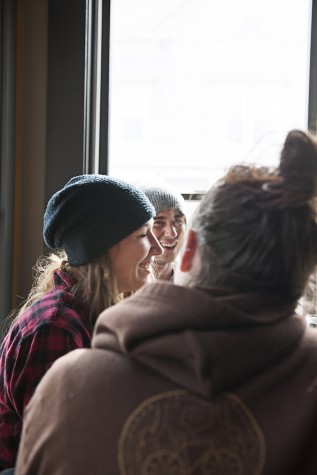 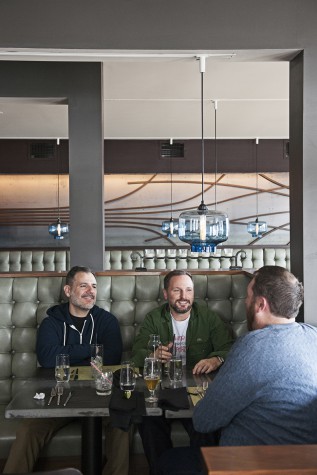 Outliers is named after Malcolm Gladwell’s book Outliers: The Story of Success, because as Outliers owner Pete Verrill puts it, “we consider ourselves outliers.” Partly due to location—on York Street on the outskirts of Portland’s West End. Partly due to how the ship is run. “I am not your average restaurant owner, and things operate a little differently around here,” he says.

The small, cohesive group of servers also share the enthusiasm for creating one of the Portland’s most unique brunch experiences. This all becomes apparent when I enter Outliers for the first time on a Sunday afternoon, and I am greeted with Wu-Tang Clan’s 1993 album Enter the 36 Chambers playing through the speakers.

Perhaps in contrast to the chosen background music, the décor inside Outliers is stunning and is the brainchild of both Verrill and his designers, Ryan Wither and Paul Lewin. The wall behind the bar is constructed of wood, but looks like waves of metal illuminated by globes suspended from the ceiling. Handsome leather banquets line the dining room, which is dominated by clean, simple lines of fixtures. Even the tap handles for draught beer resemble something out of special effects designer H.R. Giger’s work in Alien.

While on the topic of beer, Outliers boasts one of Portland’s best-kept secrets with its beer program, which casually features highly sought-after bottlings as Tilquin Gueuze and Stillbow Oxtisinal (the latter born out of a collaboration between Oxbow Beer and Stillwater Brewing).

“First and foremost, we love great beer. We love great local beer, we love great imported beer,” says Verrill. He also gives credit to manager Joe Hardy for procuring very rare and unique bottles. In turn, he is also responsible for hiding the bottles from Verrill so the “general public can get a chance to drink them, too.” Also, just because it’s not on the menu doesn’t mean it’s not in the cellar—simply ask the bartender if you’re looking for something off the beaten path, an outlier, so to speak.

Dishes are familiar, but upgraded with the best of what’s around locally. “The deliveries are made from a pickup truck, not a tractor trailer,” says Verrill. “The local farmers care about us and we care about them, and everyone cares about the food.” The smoked salmon with poached eggs and crème fraiche is accompanied by a colcannon hash, and the classic lobster eggs benedict arrives atop a large house-made biscuit. Ducks from Commonwealth Farms in Whitefield are turned into confit, which is even more delicious when covered in eggs of equal quality. Of course, there is a good deal of simplicity to the brunch offerings—from platters of raw oysters to freshly made donut holes and muffins.

I will go back to the décor for just a moment because even though it is taboo to make mention of bathrooms in any story that revolves around food, it would be a grave oversight in this case. Although I cannot speak to the ladies’ room, the men’s lounge features black rubber walls, broken mirror fragments, and a medicine cabinet equipped with a (empty) bottle of Xanax, all inspired by Hunter S. Thompson and his illustrator, Ralph Steadman. There is even a very ominous payphone that plays a dark, continuous loop of Steven Jesse Bernstein reciting his poem Face through the receiver.

At the bar, in this place on the outer perimeter of the peninsula, I think back to the namesake book, in which Gladwell dissects human triumph and claims that the key to success is practicing a specific task for 10,000 hours. The thought of logging such a thing makes my head hurt, prompting me to order a beer and put off success for another day.