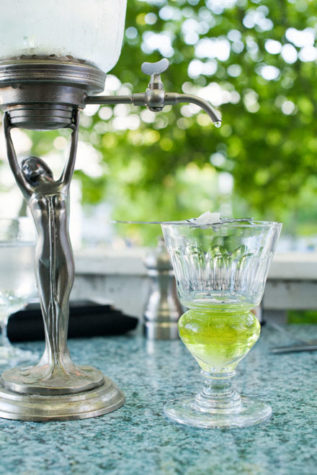 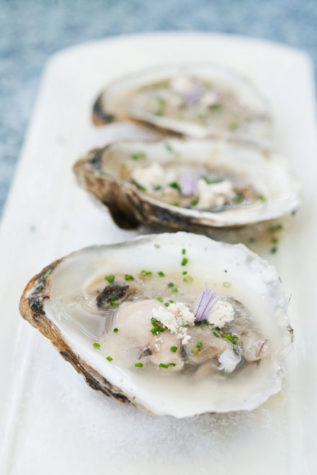 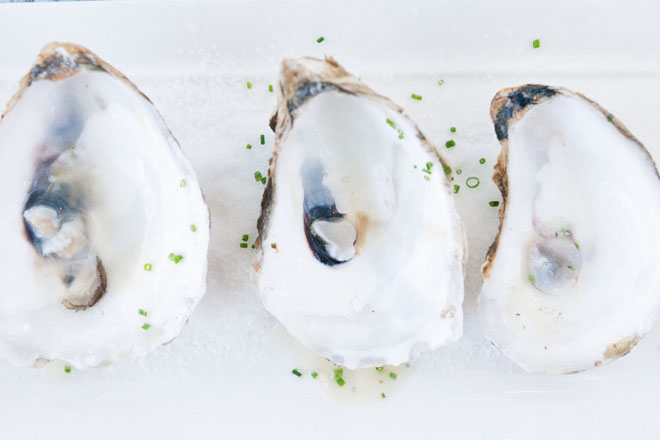 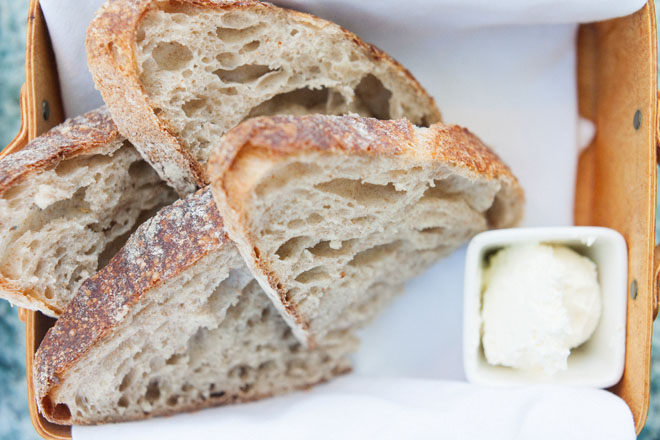 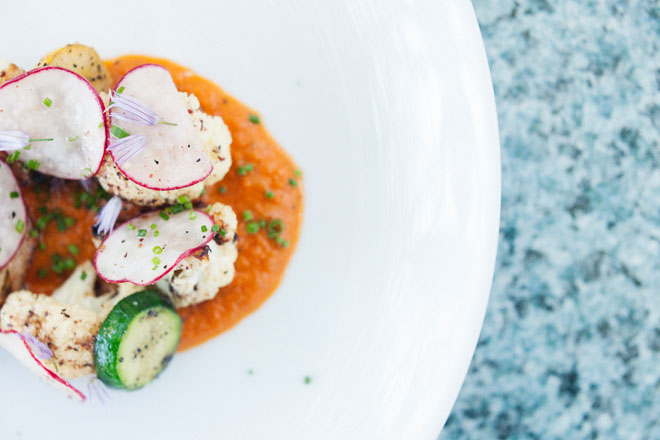 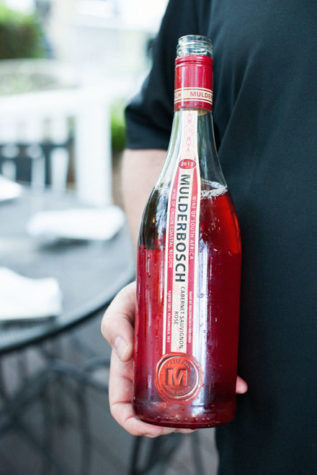 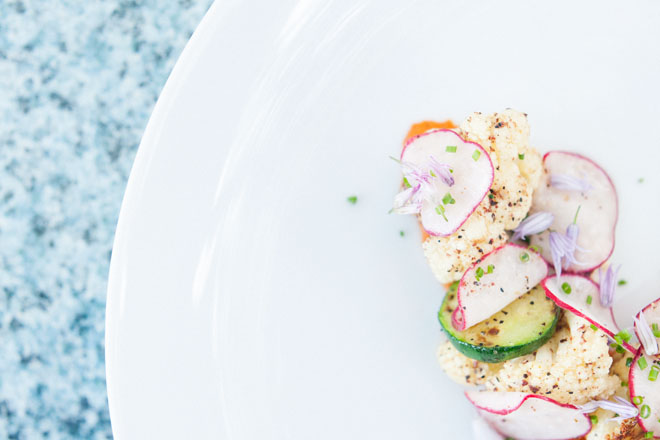 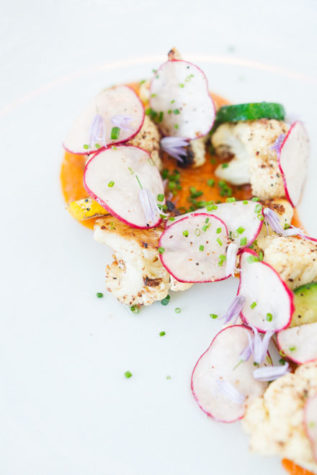 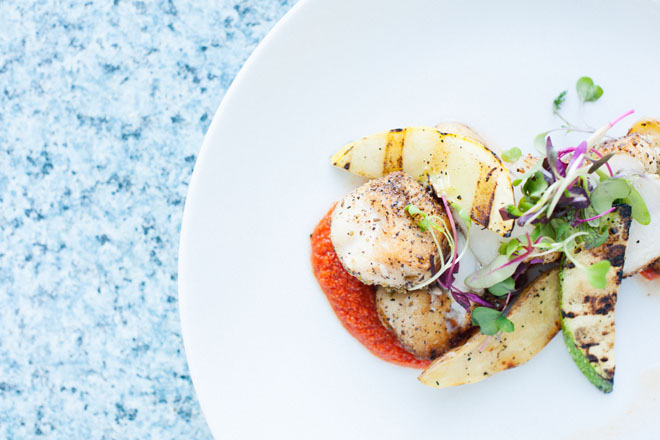 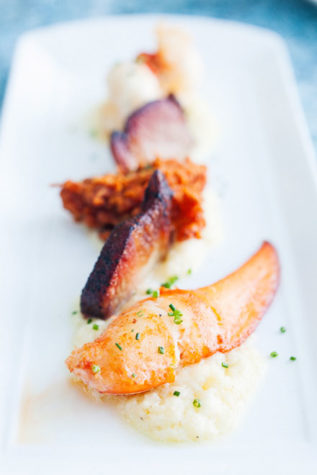 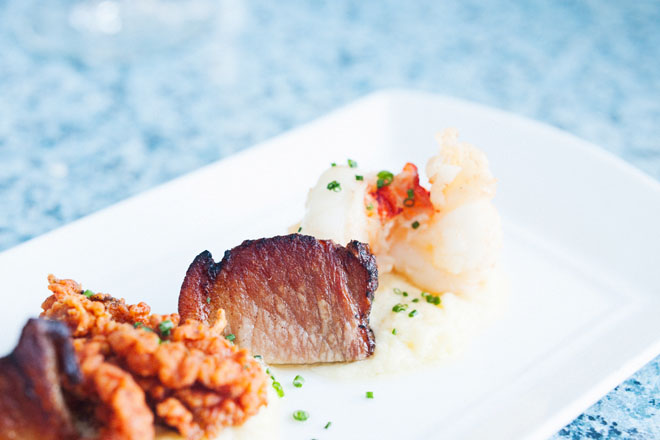 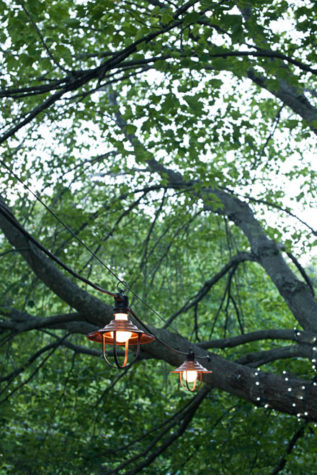 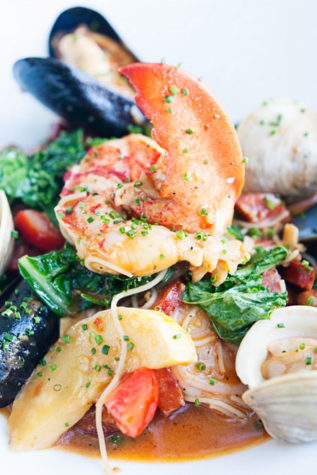 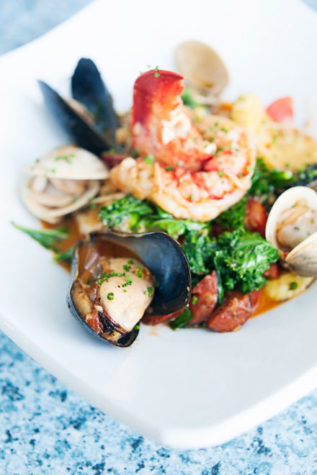 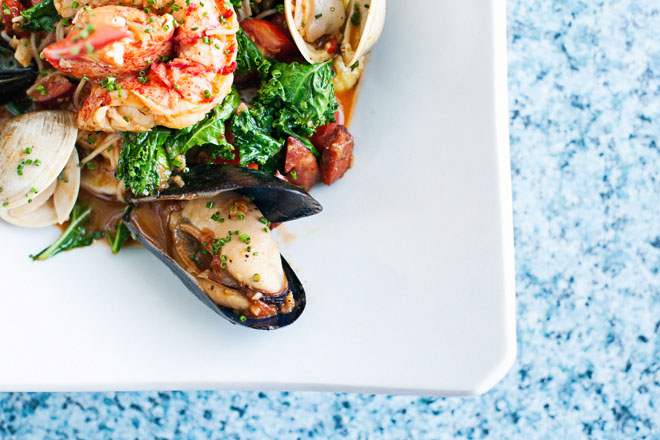 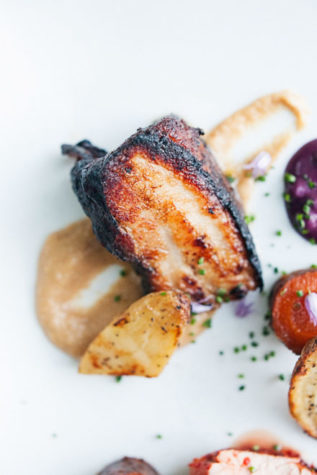 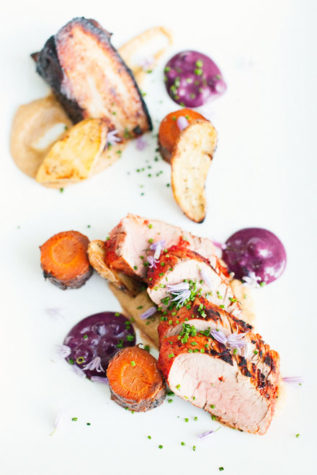 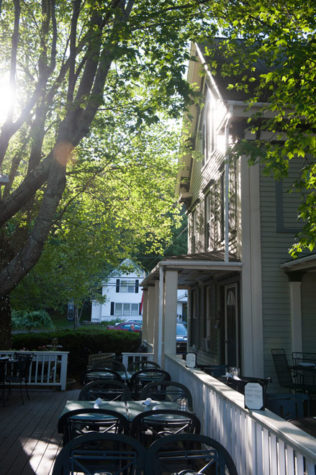 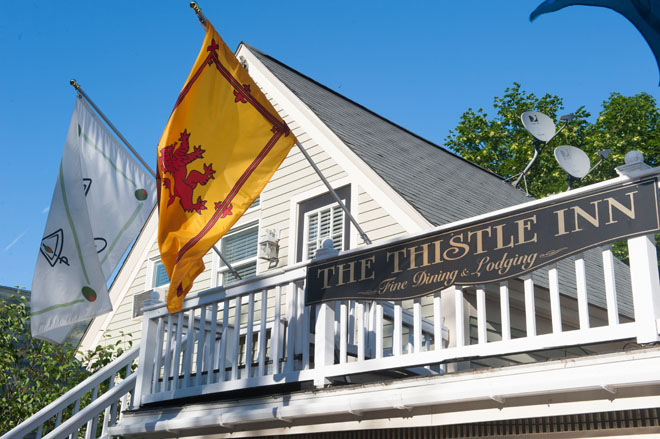 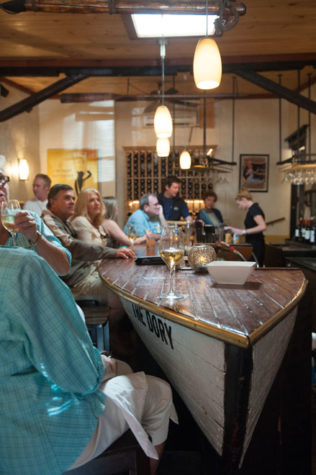 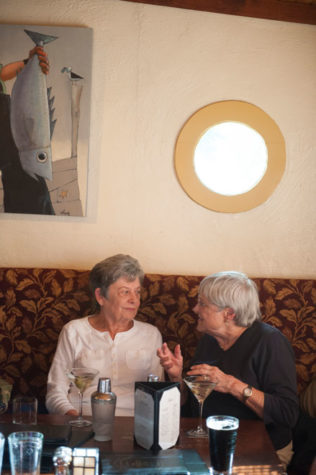 “I think you’ll really like this first pairing, it’s a bit different than what you are probably expecting.” And thus Thistle Inn owner Max Ross leaves me in suspense over what I am to drink with my order of cold, impossibly fresh Glidden Point oysters topped with bacon mignonette and chive flowers.

“Those oysters literally came out of the river this morning,” chef Nick Krunkkala tells me. “One of my favorite things about working in Boothbay Harbor is how close we are to the source for so much amazing seafood.”

Ross materializes bearing all of the elements of the proper absinthe presentation, first setting down the large silver fountain, held up by a statuette of the green fairy. He places a small chalice in front of me, half filled with straight absinthe, and lays a silver slotted spoon (fashioned into the shape of a wormwood leaf), holding a single sugar cube, over the mouth of the glass. He turns the spigot on the fountain until a slow, continuous stream of pristine water passes through the sugar cube and into the glass, a process which serves both to dilute the strength of the alcohol, which comes in at a whopping 140 proof, and sweeten the beverage unlocking its aromatics and essential herbal oils. Once the sugar cube has been dissolved, I give my glass a swirl and taste it alongside the oysters. The anise flavor of the absinthe plays quite nicely with both the brine of the oyster and the richness from the bacon mignonette, and, just like that, the meal is officially underway.

Although I am not generally a fan of al fresco dining, it is impossible to resist the allure of the patio at the Thistle Inn, which tonight is accentuated by a gentle breeze and illuminated by delicate strands of lights wrapped around venerable, looming trees. The inn itself is not large, with only six unique guest rooms as well as the Dory Pub. The pub is anchored by a large bar crafted from an original Dory boat and is a popular watering hole for year-round patrons.

As I am finishing the last sip of absinthe, I am presented with pastry chef Alex Tallen’s version of French peasant bread, which he bakes the old-fashion way using cast iron Dutch ovens. Tallen spent time perfecting her method at the Ritz Carlton in Paris. The inside the bread is soft and chewy, a perfect contrast against the crispy crust, which pairs perfectly with a healthy slathering of soft whipped butter.

The extensive wine program at the Thistle Inn is facilitated by Ross, whose résumé includes stints as both sommelier and wine director at pioneer restaurants like Radius in Boston as well as the Eiffel Tower Restaurant at the Paris Resort in Las Vegas. Organized by country, the list is quite strong in regards to prestige regions like Napa, Piedmont, Tuscany, and Burgundy and offers the usual suspects like Sassicaia, Silver Oak, and Far Niente. Further investigation, however, reveals a multitude of great values from very interesting producers such as the Bruni Morellino di Scansano from Tuscany and Laurent Kraft Vouvray from the Loire Valley. Krunkkala consistently puts out a very diverse menu with bold, dominating flavors and this wine list is definitely up to the task of elevating it even further.

Krunkkala’s unapologetic love for decadent vegetable preparations is at its best with charred cauliflower, dusted with sumac and mushroom powder, served with a sauce made from both roasted tomato and silver tequila, the flavor of which is ever so slightly present in the finish. Although it is kind of a tricky pairing, Ross successfully completes the equation with the Mulderbosch Rose from South Africa, a deeply colored 100 percent Cabernet Sauvignon which possesses an almost smoky quality as well as notes of blood orange.

As the meal progresses, Ross effectively utilizes single wines to complement multiple courses, like the Shaya “Habis” Verdejo from Rueda. Although it is full-bodied, it still has a nice amount of acid that gives it a quality faintly reminiscent of Meursault. It takes me through both butter-poached lobster with maple bacon, buttery corn polenta, and a single fried Glidden Point oyster, as well as one of Krunkkala’s favorites—fideos. For the fideos, the noodles are laden with a rich, smoky tomato broth and topped with kale, linguica sausage, mussels, clams, and lobster tail.

“The menu is seafood-centric for a pretty obvious reason,” Krunkkala says, “I mean, look around you!” At this very moment, looking around me involves catching a glimpse of the Boothbay Opera House set against the backdrop of the harbor. The house is encircled by a long line of people waiting to see Maine comic legend Tim Sample perform that evening.

Any distraction from all the commotion at the Opera House is quickly dispelled when Ross appears with a bottle of 2011 Domaine Latour-Giraud “Cuvee Carmen” Pommard from Burgundy. The delicate yet powerful nature of this pinot noir is more than enough to stand up to two preparations of pork, the first being belly that has been braised in a liquid containing fennel and strawberries until tender and perfectly integrated with the sweet, delicious fat. The second is perfectly grilled loin served with carrots cooked rescoldo (buried in embers and ash), creamy onion sauce, and blueberry mustard. While there is a range of flavors at work, they all remain complementary to one another.

I have known Krunkkala since he owned Oscar’s New American in Yarmouth, and after meeting Ross I must say I am quite pleased that these two have come together. Like most coastal Maine destinations, many still consider Boothbay Harbor to be all about tourists and prerequisite down east fare. To those people I can say that The Thistle Inn will change that notion from the first minute one sets foot through its doors.