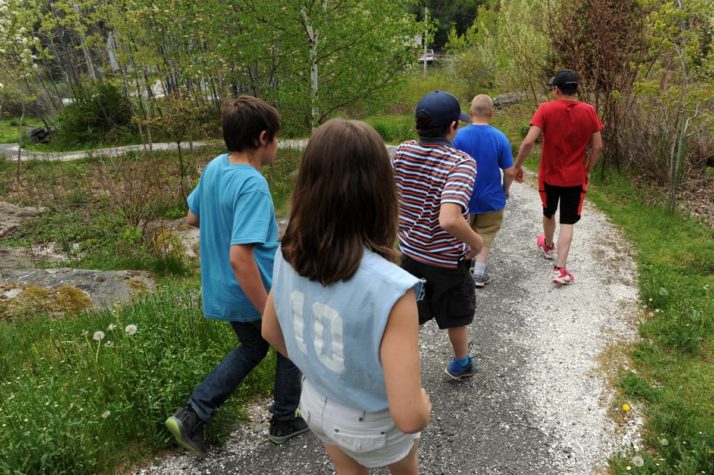 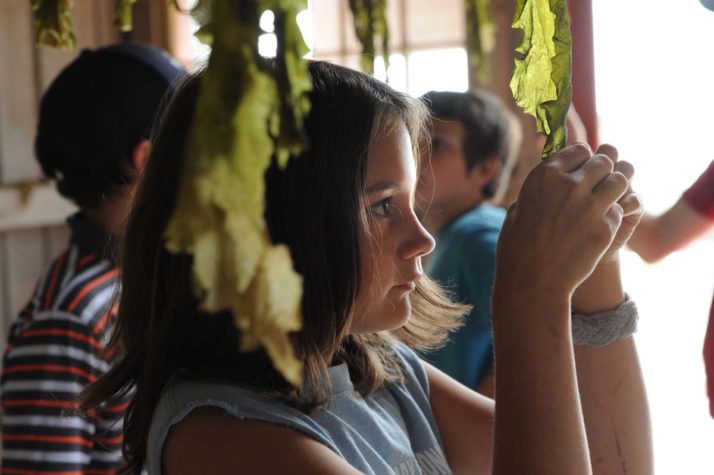 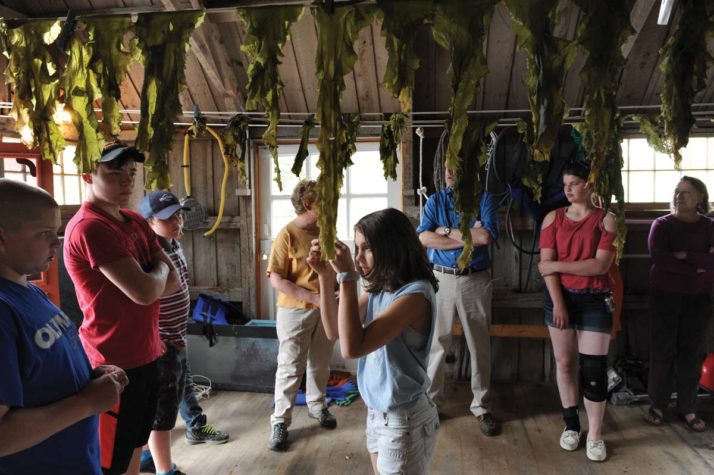 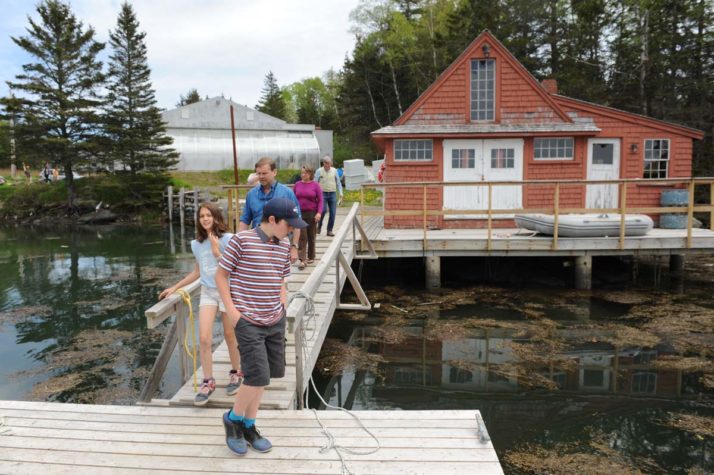 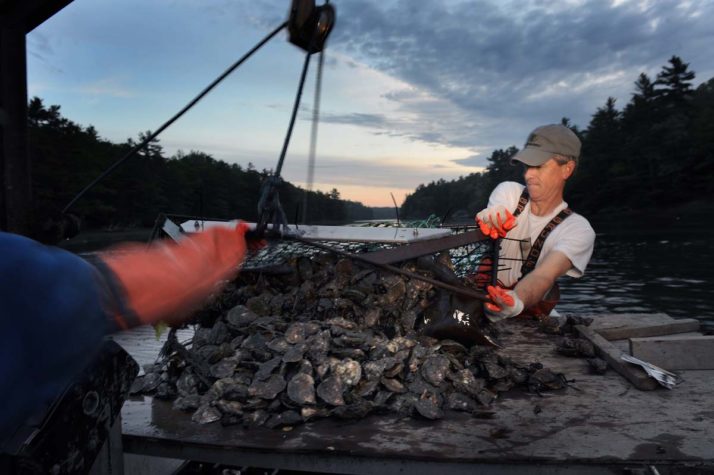 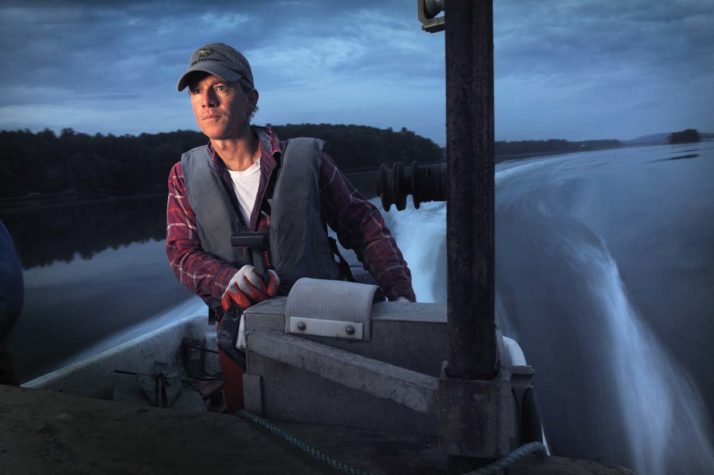 Eric Horne maneuvers quickly upriver in the predawn to begin a long day of harvesting on the family’s oyster leases. Oyster harvester Eric Horne heads out predawn toward his harvest site. 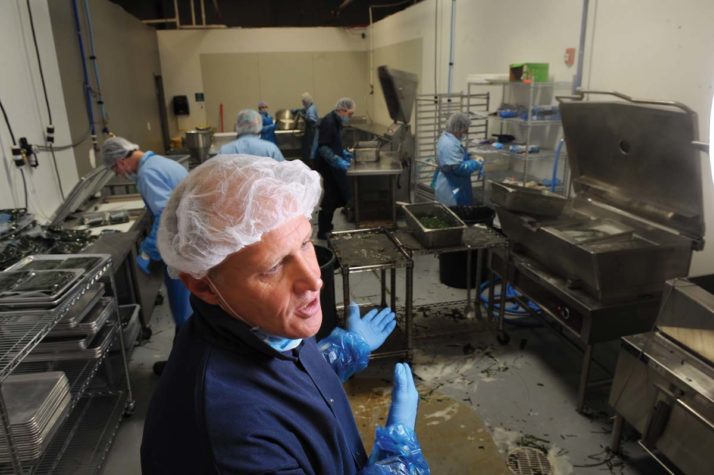 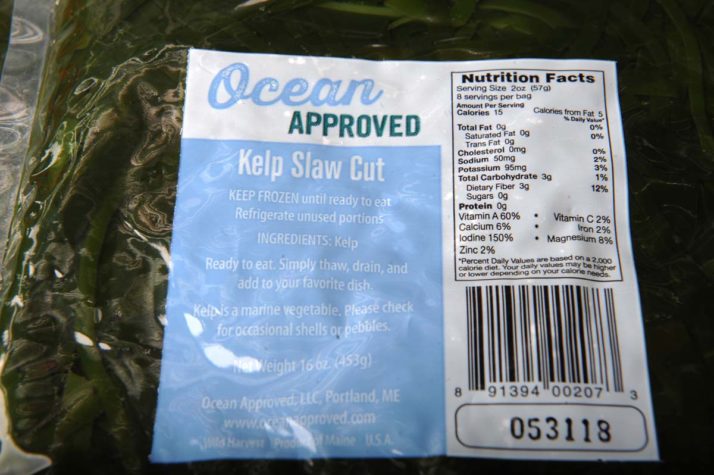 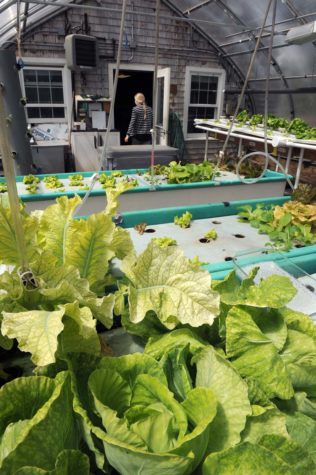 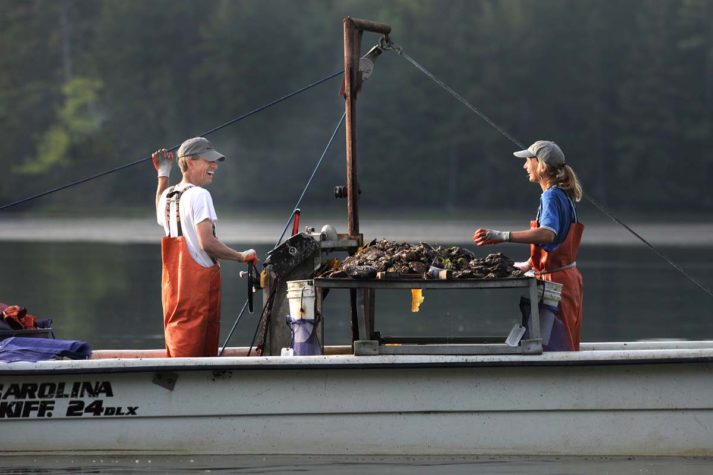 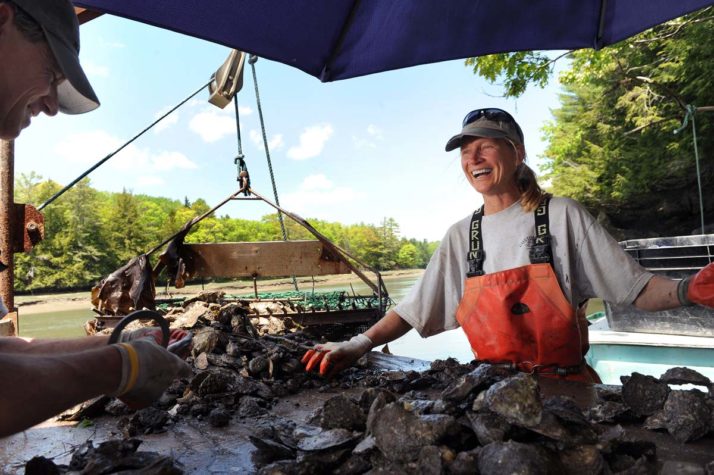 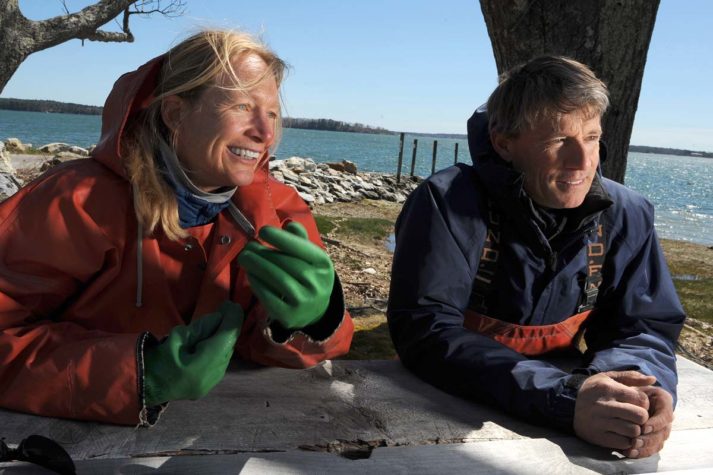 A new generation of sea farmers is expanding markets and creating new industries.

Sebastian Belle, the executive director of the Maine Aquaculture Association, stands in front of half a dozen middle-school students at the Herring Gut Learning Center in Port Clyde, giving an overview of Maine’s rapidly growing aquaculture industry. Many midcoast communities are beset nu the declining harvests of wild fisheries, and 18 years ago the far-sighted Phyllis Wyeth established this learning center to give locals students hands-on learning experience in marine farming.

Maine’s first aquaculture lease was issued by the state in 1974 to a crusty iconoclast named Ed Myers who wanted to farm blue mussels. Myers and all other aquaculture business owners need ocean leases because the sea floor is otherwise open territory; without this legal protection, anyone could harvest the mussels, oysters, or salmon that sea farmers plant and tend. But fishermen often object. As one remarked to me years ago, “Hell, I can’t go set off 25 acres and keep everyone else from fishing there, so why should they be able to?”

For most of aquaculture’s next three decades, resistance was relentless. Commercial fishermen disliked the whole idea of aquaculture, and when their opposition combined with that of waterfront homeowners who objected to floating equipment in their view, the business environment for aquaculture was, to put it mildly, challenging.

But then wild fishery declines began to cloud the horizon for coastal and island communities that had depended on the sea. Haddock landings in Maine peaked in 1983, halibut in 1988, and cod in 1992. Scallop landings declined through the 1990s. Maine’s shrimp season closed in 2013 and has not reopened. So, if you had dreamed of working for yourself on the ocean, the options have dwindled. Hence, in places like Herring Gut Learning Center and in new training academies set up by the Maine Aquaculture Association, Sea Grant, and Island Institute, some fishermen and their sons and daughters are turning to farming the ocean.

Belle tells Herring Gut’s attentive students that he put himself through college by fishing offshore, but, “the fishery I was in was in decline,” so he turned to aquaculture. He earned a graduate degree in economics and built farms for salmon, tuna, and halibut in 12 different countries.

Maine now has 190 farms on the ocean, Belle tells the students. Some are finfish farms; others raise shellfish, such as oysters, clams, and mussels, while the newest farms are raising seaweed. They are all family-owned businesses, from tiny mom-and-pops to international outfits like Cooke Aquaculture, which employs 250 people and boasts total worldwide sales of $1.8 billion from its salmon farms in eastern Maine and operations in Canada and Alaska.

Maine’s first shellfish farms, most specializing in oysters, were clustered in the Damariscotta River, where there are now few unoccupied grow-out sites. Many of Maine’s best-known oyster brands are from the Damariscotta estuary, including Dodge Coves, Glidden Points, and Pemaquids. But I am curious about the newer oyster farmers, and Belle suggests I meet Eric Horne and Valy Steverlynck, owners of Flying Point Oyster Company, at one of their lease sites near the confluence of the Cousins and Royal Rivers in Casco Bay.

Horne grew up in Freeport and got an early exposure to aquaculture through his father, a university administrator, who was a part-time partner in a business raising quahogs in Maquoit Bay. Horne remembers that part of his childhood as “out in the mud basically having a good time.” Steverlynck comes from a farming background on the Argentina pampas. She came to the United States to attend Brown University, where she and Horne met. “I studied art; I didn’t even know what an oyster was,” says Steverlynck.

Horne and Steverlynck were young professionals living in Boston when they married in 1997. But they could not see themselves raising a family in the city, so in 2000 they moved to Maine to try to make a go of oyster farming. Initially they worked for Winter Point oyster company as they established their own locations. They knew to look for certain kinds of bottoms—in estuaries, with a mix of fresh and saltwater, where oysters thrive but their predators do not. They also learned the hard way that good bottoms can change within a few feet. Their first years in business were also beset with water quality issues and major storms, which brought in layers of silt that smothered their oysters. Only two of their ten locations produced any oysters. “You have to float yourself for three years until you get a crop, and with setbacks that can stretch to five or six years,” says Steverlynck. One year, while waiting for their oysters to grow to marketable size, Steverlynck went back to teaching art and Horne worked in marine construction. By 2006, however, they were producing a profit and entered the oyster business full-time.

At the couple’s operation off South Freeport, we board their rugged 18-foot Carolina skiff. At the site, which is part of a patchwork of 25 acres they lease, Horne hoists his custom-designed oyster drag (a self-taught welder, he fastened it to the gantry himself ) up and over the side while Steverlynck lines up the tow.

They harvest once a week, hauling aboard three- to four-inch oysters. They aim to produce 200,000 oysters per year, which they sell wholesale to New York and Boston markets. “It helps to be a Maine oyster because it’s viewed as high quality,” says Horne. Still, in the fall when oyster supplies from the rest of the East Coast increase, the demand for premium Maine oysters drops by half.

Horne and Steverlynck have three children at home in Freeport, ages 6, 10, and 14. Their company’s low-overhead approach, says Steverlynck, “keeps us nimble and family-oriented. We design our schedule around our needs at home.” But there are of course major risks as well. “You drag for hours on end—days on end—months on end,” says Steverlynck. And Horne adds, “Everything is on the line in a storm.” As we head back ashore, having sampled some delectable Flying Point product, I ask Steverlynck how she likes to prepare oysters. “I like to sell them,” she responds. But for all their practicality the farmers are also reflective after a decade and a half in the business. “I would do it again,” says Steverlynck. “It’s a small miracle we survived—there are so many things that did go wrong.” Horne points out that their survival rate is only 20 percent of the juveniles they have raised in seed nurseries and then plant on their leases, partly because the waters in Casco Bay are cooler than in Damariscotta. Nevertheless, he adds, “We are now able to make a steady go of it.” The secret of their success is straightforward, says Steverlynck. “You have to keep at it. You have to be persistent. Too many new farmers give up.” Horne chuckles at the definition he once heard of an entrepreneur as a person who works 24 hours a day for himself to avoid having to work eight hours a day for someone else. But this pair of oyster farmers has another explanation for their success: “Being on the water makes us happy,” says Steverlynck.

Our next stop is a big change of scene: a sprawling warehouse in Biddeford’s industrial park, where tractor-trailer loads of fresh vegetables are in the process of unloading. Ocean Approved, Maine’s largest seaweed aquaculture business, has just entered into a co-packing agreement with Curran’s, which is the largest processor of fresh vegetables grown on farms near and far in Maine. Co-owner and general manager Paul Dobbins meets us at the door.

“We’ve been here a week,” Dobbins says with a wide-eyed enthusiasm that belies his deep experience with entrepreneurial start-ups, first with a company that made environmentally friendly home cleaning products, then at Idexx, where he helped the company expand into the Japanese market. Ocean Approved began in 2009, with half a million dollars in grants and loans from NOAA Fisheries and the Maine Technology Institute. Dobbins recently closed a new round of financing with investments from the Maine Venture Fund, Coastal Enterprises Inc. (CEI), and the Island Institute, which enabled the company to move into this new larger space and dramatically increase production. “We had the demand and we had the supply, but we couldn’t increase our sales without more efficient equipment,” he says.

Dobbins has the persuasiveness characteristic of all true believers; he makes you believe along with him that sea vegetables are the most natural thing to be eating. His belief in sea vegetables has deep roots. His great-grandmother collected and served them in Newfoundland when they were the only winter vegetables available.

But Dobbins is also excited by the fact that kelp, which is the only farmed vegetable that requires no arable land, fresh water, fertilizers, or pesticides, also removes excess nutrients from the water column. “We are kelping the earth,” he quips.

Globally, kelp drives a $5 billion industry, and most of it is sourced from Asia. But Ocean Approved sources its seaweed—two species of kelp, known locally as “horsetail” and “sugar kelp”—from a combination of wild harvesters and seaweed farms in the Gulf of Maine. Dobbins’s goal, however, is to source 100 percent of the company’s product next year from kelp farms, five currently in operation and five planned for various locations in New England. “We want seaweed not just from our farm, but from others in the region, because we want to create a new industry and meet the growing demand for our products created with farmed sea vegetables,” he explains.

This year Ocean Approved will ship 60,000 one-pound bags of kelp slaw—linguini-like strips of kelp—to colleges, universities, restaurants, and other food service suppliers. Ocean Approved recently found a hit product in smoothie cubes, of which they will produce some 260,000 this season. The cubes, which add important micro-nutrients and texture to fresh fruit drinks, resulted from a series of experiments conducted with the help of Samantha Allen at the Maine Squeeze Juice Cafe, a popular smoothie bar with two locations in Portland and one in Kittery. Juice bars up and down the East Coast and even in Texas will be serving Ocean Approved’s smoothie cubes this year.

Dobbins has always looked for business opportunities in transformational markets, and he believes kelp farming is one of them. Kelp from Asia is shipped dried to the United States, then is reconstituted with dyes that restore its green color. Health- conscious American customers don’t like the dyes, and have concerns about the water quality where kelp is grown in Asia. “Our selling point is the Gulf of Maine,” says Dobbins. “We have the cleanest waters in the world. It’s our great competitive advantage.”

Back at Herring Gut, the students have just given Belle a tour of their aquaculture micro-enterprise. Their first step was seeding lines with kelp spores. They carefully suspended them in Herring Gut’s tidal impoundment, off the bottom to avoid predation from green crabs, and watched the kelp grow. The total harvest was 22 and a half pounds, they tell him proudly, and they are drying it in a small shack at the edge of the pound. Their challenge now is to design kelp products they can sell. So far they have proposed kelp pretzels, kelp dogs (seaweed sprinkled on hot dogs), and a smoothie enhancer they call Kelp Kombombo, a play on kombu, another name for kelp. Students such as these at Herring Gut are clearly excited to be at the forefront of Maine’s new wave of aquacultural innovation. 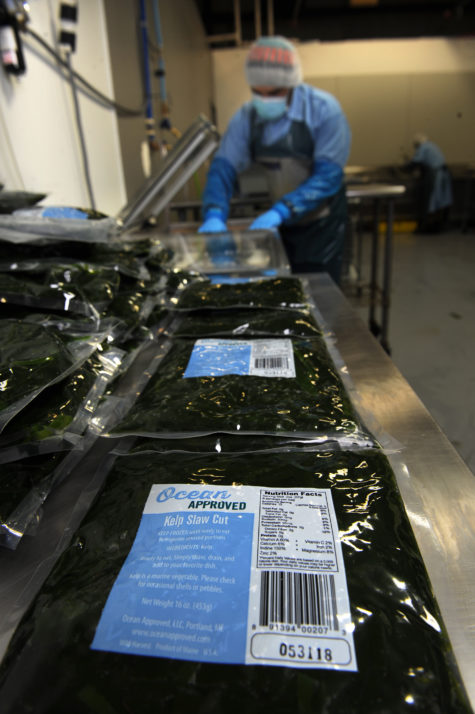 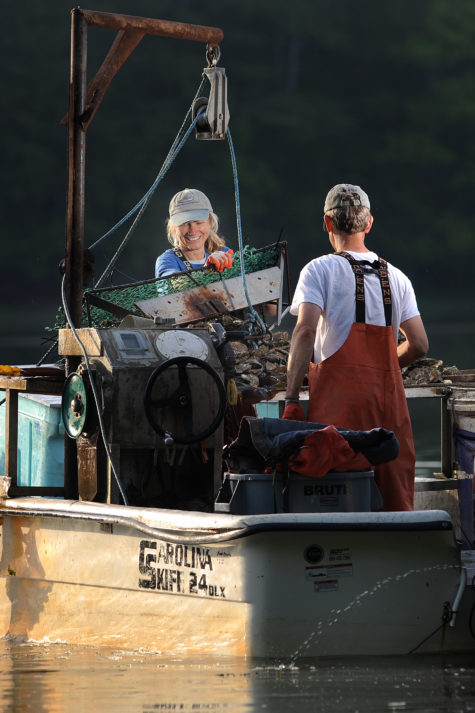 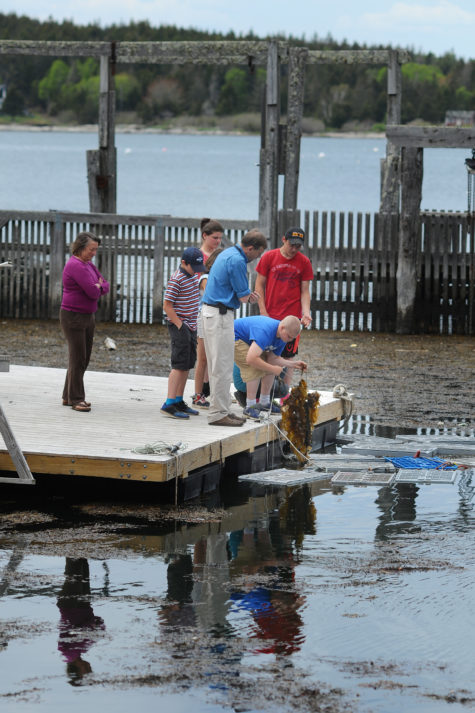 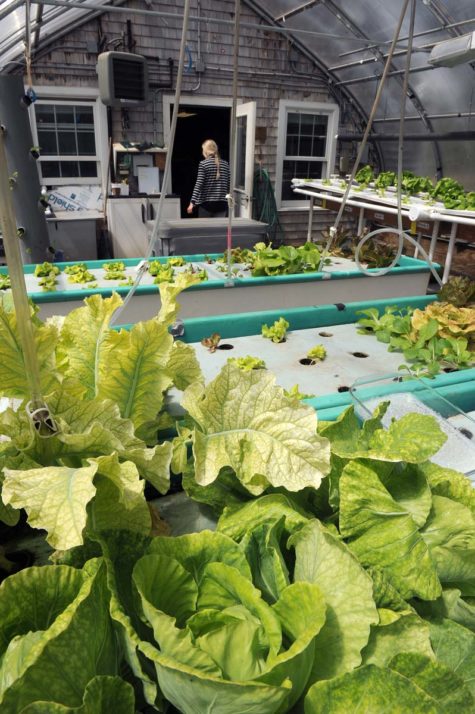 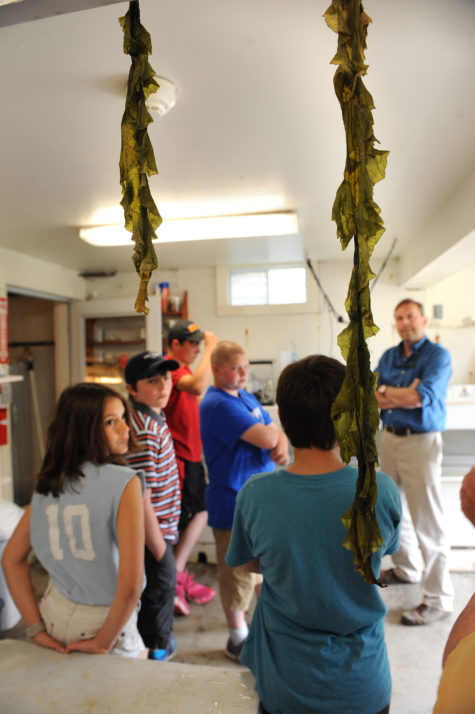