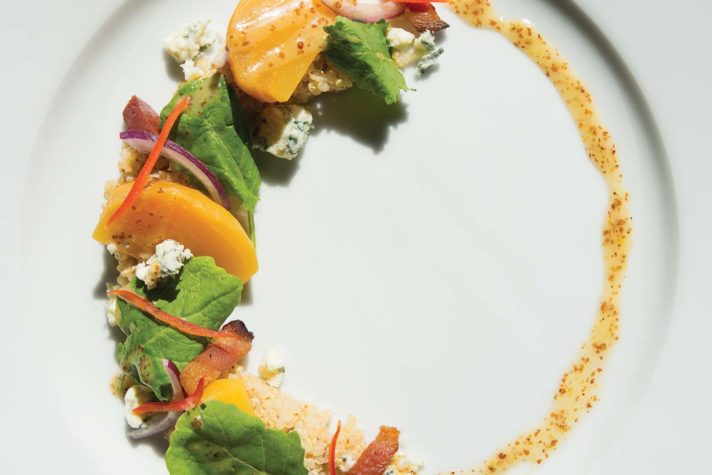 The beet and quinoa salad, a hit at David’s KPT’s monthly test kitchen events, is now on the menu. 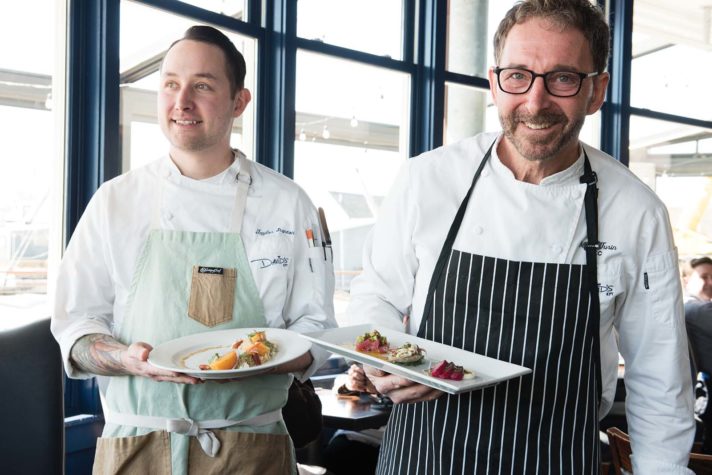 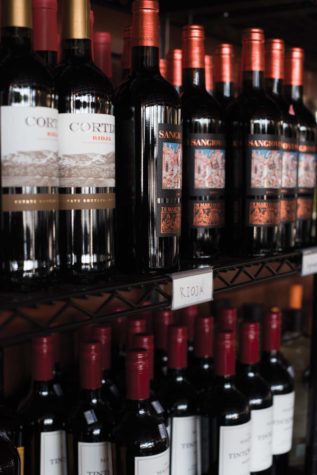 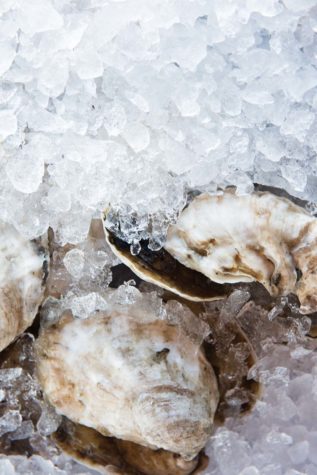 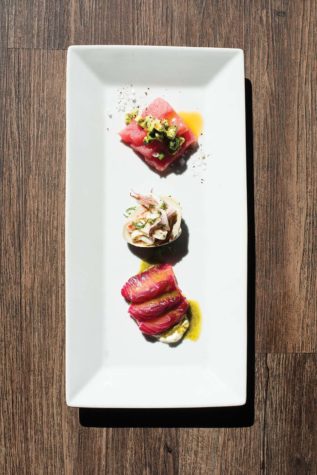 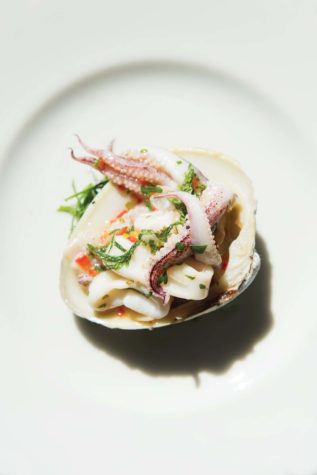 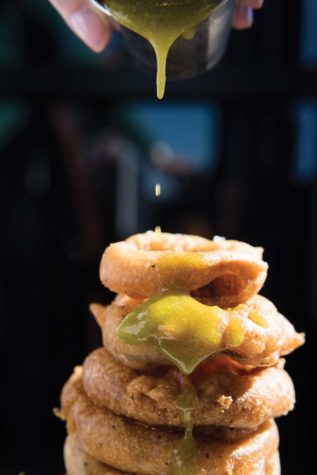 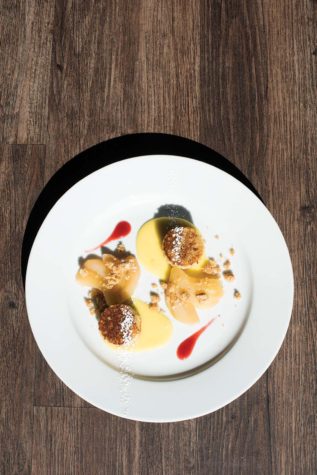 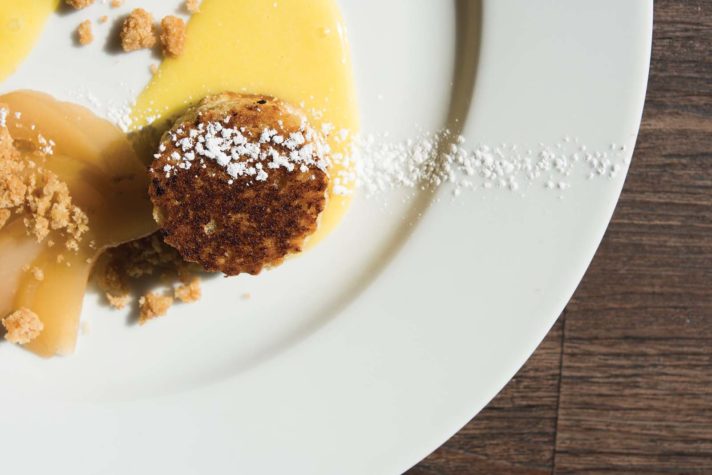 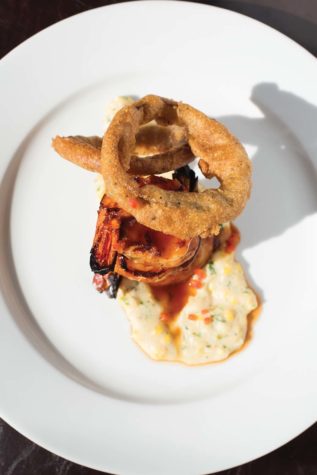 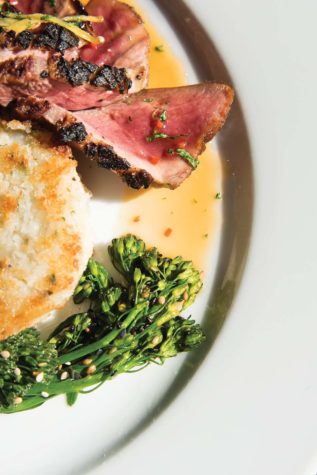 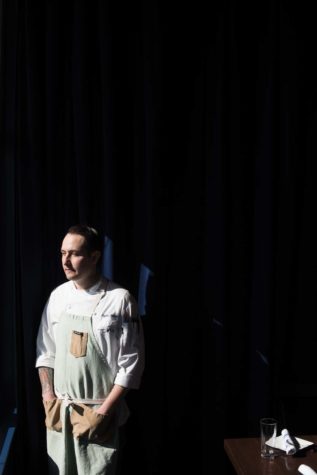 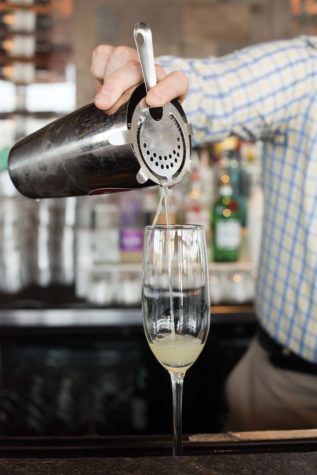 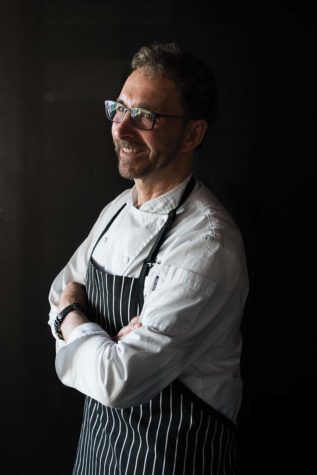 One afternoon in early June of last year, during a quiet moment between Kennebunkport Festival events, I took myself out to lunch. I could have gone to any of the fine choices in town, but I knew where I wanted to be-the deck of David’s KPT. It was early in the season, that sweet spot where you can take off your sweater and let the sun graze your shoulders, the moment you dream about all winter. I was shown to a seat, with a small table and an uninterrupted view of the sparkling river. I ordered a lobster salad and a glass of prosecco. An off-duty server from another restaurant sat nearby, reading a book and sipping white wine. An older couple behind me, faces turned toward the sun, looked blissfully content as they shared a bowl of mussels. I exhaled. The season had begun, and there was no better place to celebrate.

Of course, there’s much more to David’s KPT than enjoying the sun on the deck. The restaurant is on the first floor of the Boathouse Waterfront Hotel, a luxurious, nautically inspired inn developed by the Kennebunkport Resort Collection (KRC). When Tim Harrington of KRC approached David Turin to open a restaurant inside the new boutique hotel, Turin admits he was a little skeptical. “It was going to be a very expensive build out. It needed special pilings and permits,” says Turin. “And most hotel restaurants tend not to be that interesting.” Turin also wasn’t looking for a new venture. He had just opened Opus Ten in Portland, his experimental restaurant-within-a- restaurant. “But I’m famous for, ‘Well, let’s just take a look,’” he says. KRC is well known for its distinctive properties in the Kennebunk area. Each hotel has its own unique character and style, along with a culinary mission. “Tim Harrington (founder and creative director) is a true visionary,” Turin says. “He has a very unusual ability to get to the essence of something he’s seen in his travels and make it come alive.” The Boathouse Waterfront Hotel is a prime example of this, with its upscale coastal decor that’s tasteful, comfortably chic, and never cliché. Walls are just the right shade of navy; there are abundant stripes, antique model schooners, and lots of mahogany. All it needed was a restaurant, and a chef, that complemented Harrington’s plan.

Harrington had a lot of confidence in Turin. The chef/restaurateur has decades of experience, high standards, and broad appeal. David’s in Portland and David’s 388 in South Portland both attract enthusiastic followers in search of creative but approachable food, thoughtfully prepared and reasonably priced. He could bring that same standard to Kennebunkport’s waterfront. “David was such a win for Kennebunkport. He’s so much more than just a great chef. He embodies the spirit of hospitality. He’s incredibly creative and inspires our people. It’s been a truly great collaboration,” says Harrington. The Boathouse decor rolled right onto the new restaurant space, with a yacht-like interior to match the exterior views provided by the surrounding full-length windows. Plush upholstered seating and soothing tones evoke an immediate sense of comfort and well- being. There’s one bar area by the entry for a more casual experience and another in the dining room, which draws in those waiting for tables or who prefer to order dinner at the bar. Near the back of the restaurant is yet another bar that also serves as a raw bar. And the whole place is surrounded by that heavenly outdoor deck. Each seating area has a view— of town, the bridge, and the water.

The first person Turin hired was general manager Jeff Fightmaster. “I knew within 30 seconds of talking to him that he was the right person,” Turin says. “He understood staff training on a larger scale.” When the restaurant opened in May of 2013, neither Turin nor Fightmaster knew what to expect. “I thought maybe we’d have 600 guests a day to start, but we surpassed that the first week,” Fightmaster says. “We were just not expecting to do the numbers we did right off the bat. Suddenly we were serving nearly 1,100 guests a day.” This was new territory for Turin, and it took some adjustments in menu planning. “We use a smaller number of elements in a dish, but we make sure each one shines,” he explains. “We’re actually elevating the level of the food, because each element has to pull its own weight.” A new dish that he’s particularly proud of, scallop crudo, illustrates the concept. The perfect scallop is dusted with porcini mushroom powder, then barely seared. It’s presented with pickled shiitake mushrooms on a sauce that Turin has named “mystery beurre blanc.” It tastes faintly of curry and a touch of soy. “It’s my favorite thing I’ve made this year,” Turin says. “Chefs have an urge to add stuff. A dish isn’t done until you can’t take anything away.” This is not corner cutting by any means, but a careful and conscientious approach to making food that’s advantageous for both a busy kitchen and diners.

In preparation for the summer season, Turin recently instituted monthly “test kitchen” nights. This is an opportunity for him and his kitchen staff to try out new recipes for the menu and receive feedback from tasters who have bought seats at the table for the evening. “The kitchen’s really gotten behind this,” he says. Dishes are collaborations between Turin and chef de cuisine Taylor Stanton, who has worked alongside him in the kitchen since the first day. “I trust Taylor,” says Turin. “He understands the brand and he understands how to be able to do it for 600 people a night.” Stanton, whose right arm is brightly decorated with vegetable tattoos, appreciates all he’s learned from Turin. “He gives you the tools to succeed,” he says, “and lets you take it from there. And he has so much stamina.”

At the first test kitchen night in February, Turin greets diners seated in the raw bar room. He encourages honest feedback and provides paper menus with space to make comments. This evening’s menu includes a trio of oyster preparations and a fried oyster po’ boy on a steamed bun with napa cabbage slaw, a twist on his ever-popular pork shoulder bun. There’s a pickled beet dish that will eventually morph into a quinoa and beet salad with kale, Great Hill Dairy blue cheese, and bacon lardons. An apple-cider-braised short rib is ridiculously tender, barely needing a knife. At the next test-kitchen dinner, the chef presents a tower of spicy honey barbecue shrimp atop jalapeno-corn porridge. And marinated duck breast gets a drizzle of sweet wine sauce fortified with ginger, soy, and garlic butter. “I think this is my favorite duck sauce ever,” Turin says. “Having to keep the elements in check has made my cooking better,” he continues. “I’m more focused on getting each one exactly right.” This summer, there will be a new emphasis on crudo, with a variety of creative presentations, including gorgeous, fuchsia beet-cured salmon gravlax and buttery yellowfin tuna with chili oil and avocado. Many of these experimental dishes have earned a spot on the David’s KPT summer menu, but old favorites remain. Turin’s pepper-crusted rare tuna with sesame-peanut soba noodles is a beloved dish that retains its place on the roster, along with open-faced lobster ravioli and the KPT meatloaf. Crisp Allagash White beer-battered onion rings, another perennial hit, live on with an updated mango-jalapeno “ketchup” developed by Stanton. “People assume we’re fancy because of the decor,” says Turin. “We’re not fancy. You can come dressed any way you like and order a pizza if you want. It’s really considered upscale casual.” But of course the chef ’s pizza is quite remarkable, too, with choices from steak and lobster to “Cajun reggae” with blackened chicken.

Beverage director Andrew Baker also tries out new ideas on willing participants at test kitchen events. A special cocktail, Perfect Pearl, contains limoncello, Cointreau, lemon and lime juices, and is topped with prosecco. “Anything that has bubbles does very well in Kennebunkport,” says Baker. “Our cocktails cater to the seasons. We put ourselves in a summer mentality long before summer starts.” He’s developing at least ten new concoctions, “five up and five on the rocks,” he says. Pascal’s Persuasion, with Bombay Sapphire gin, fresh celery puree, lemon juice, and simple syrup is light and refreshing, a lovely complement to acidic foods. Baker also oversees the extensive wine list. “It’s a really robust list and could be kind of daunting. But the service staff has been well trained to help guests.” His goal for the summer is to expand the selection of rosés to include new varietals. He encourages beer drinkers to try something new, too, offering craft brews that they have not tasted before.

Turin has been an integral part of the Kennebunkport Festival since its inception in 2011. Last year at the Spirit of Maine event, he was on the dance floor balancing a tray of ice cream cones while grooving to the beat. David’s KPT is the site of the Grand Finale, a no-holds-barred party overflowing with live music and dancing, incredible food, and plenty of drinks. “The festival is the kick-off to summer,” he says. “It brings people, and big energy, to town.” That’s true. And when you need a break in all the excitement, there’s no place like a seat on David’s KPT deck. 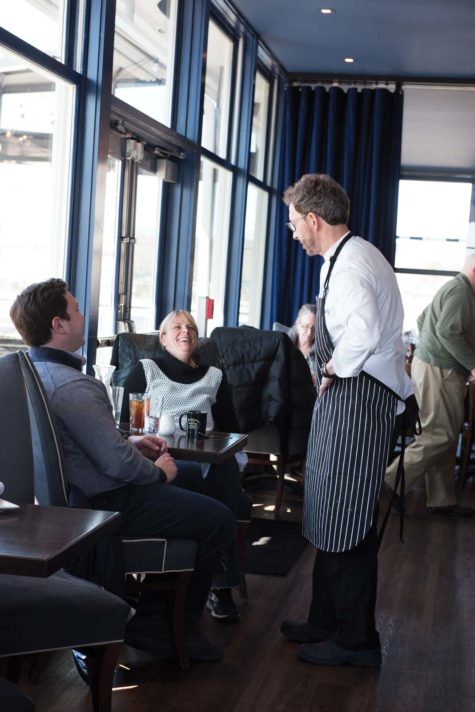 Turin enjoys spending time with diners, both regulars and first-timers. 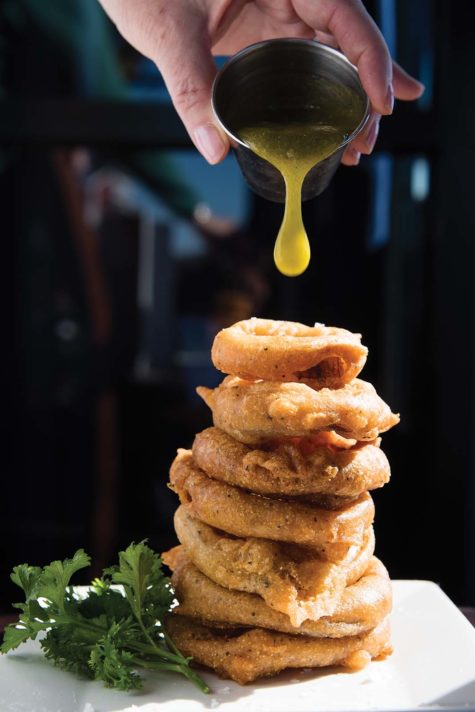 Beer-battered onion rings get a boost from a tangy mango-jalapeno sauce. 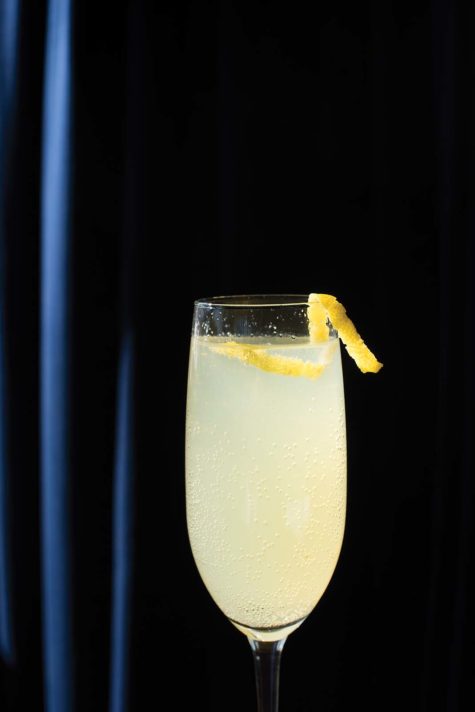 A Perfect Pearl, the very essence of summer.