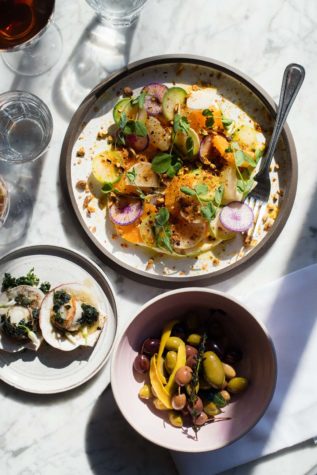 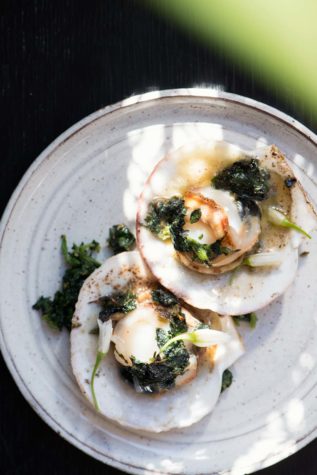 Sea scallops served in their shells. 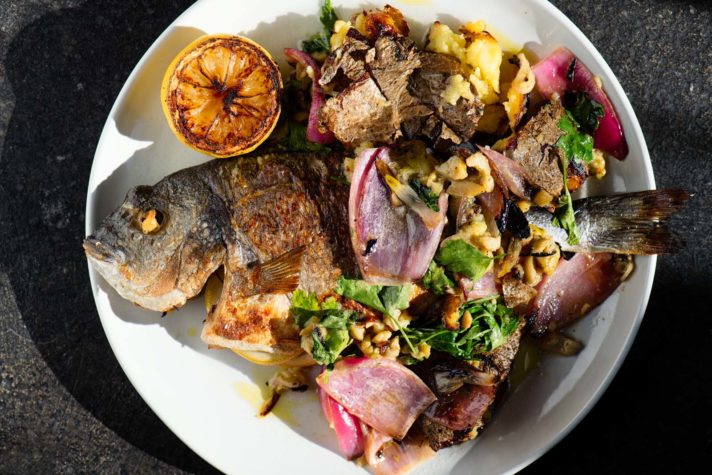 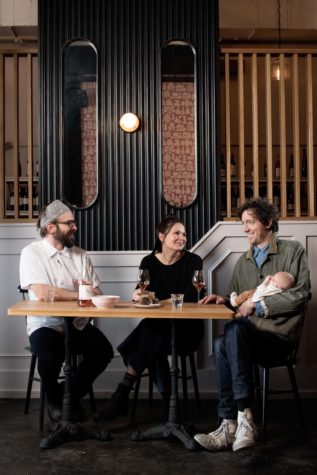 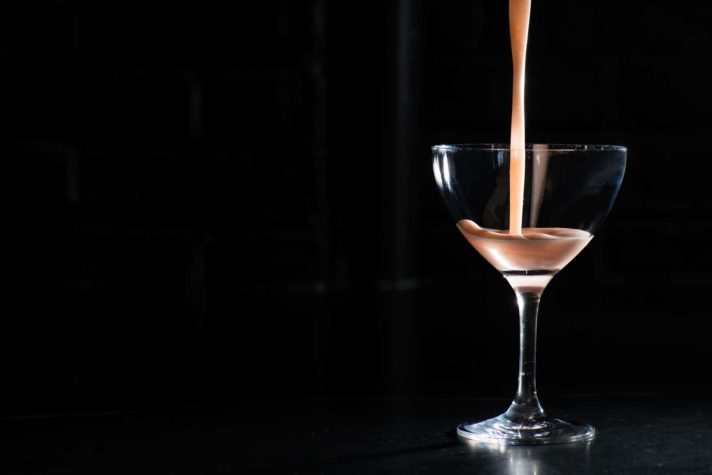 Mama Don’t, a cocktail named for a J.J. Cale song, is a rum and pomegranate juice concoction frothed with egg white. 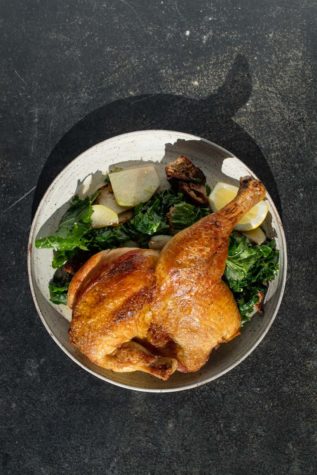 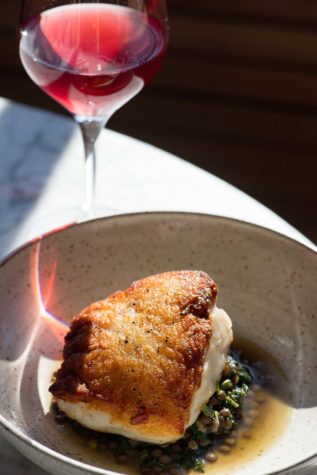 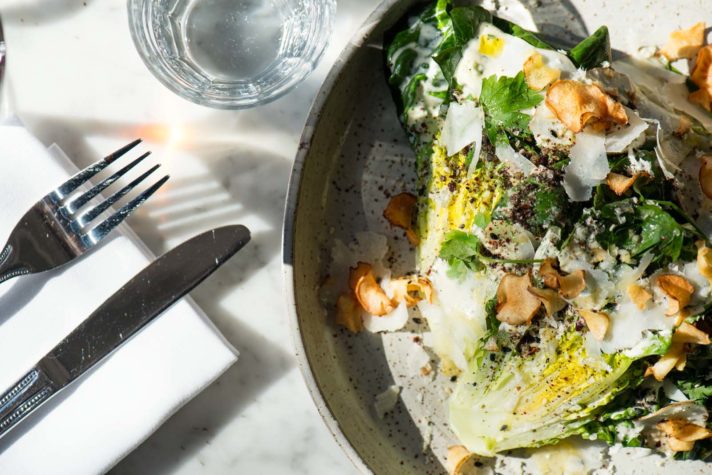 A salad of Little Gem lettuces with sunchokes, black sesame seeds, and yogurt. 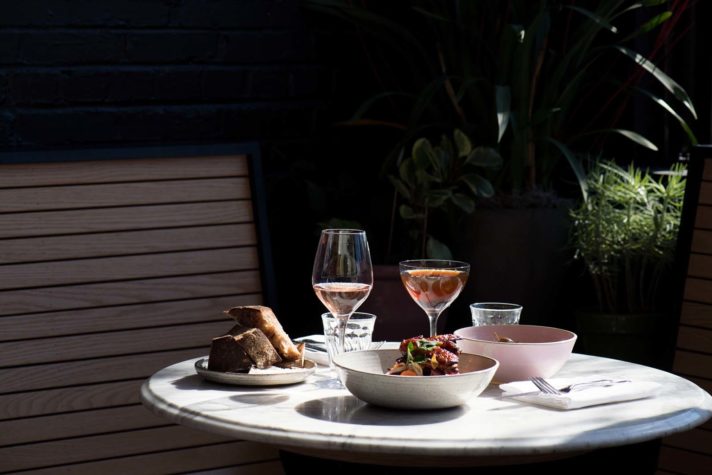 A serene corner in the Drifters Wife dining room.

In February 2016, Peter and Orenda Hale’s year-old natural wine shop, Maine and Loire, was on the verge of going bust. The couple had been drawn to Portland from Brooklyn, New York, where they met working at a restaurant known for serving exclusively natural wines—loosely defined as those made without chemical or technological intervention. Given Portland’s celebrated food and drink scene, they figured the wine shop would be a good fit, especially due to its location on an up-and-coming stretch of Washington Avenue at the base of Munjoy Hill. But the largely unfamiliar bottles weren’t selling.

“We knew we needed to open the wines so that people could try them,” says Orenda. They created what she calls a “makeshift restaurant” in the front of the shop, recruiting a fellow Brooklynite, chef Ben Jackson, and his wife, Alexis, to move to Portland and work with them in the tiny wine bar they created and named Drifters Wife, for a song by the late guitarist J.J. Cale (both Hales are fans).

The wine bar was the first step in what Peter calls “a series of ‘just go for it.’” Jackson’s intensely seasonal food, which was cooked on two induction burners and served alongside the exceptional wines, began to attract local and national attention, and when the opportunity arose to move into a larger space next door, the Hales went for it. In February 2018 the new Drifters Wife debuted with a full kitchen for Jackson, 60 seats, and a look that combines sleek midcentury-modern lighting and blond wood banquettes with black walls and a bright white ceiling whose steel beams recall the building’s industrial past. Maine and Loire is now inside the restaurant, visible from the dining room through partial walls.

Last August Bon Appétit named Drifters Wife to the “Hot 10” list of “America’s Best New Restaurants,” and suddenly, getting a reservation required significant advance planning. “I’ve worked in restaurants since I was 13, and that was a personal source of pride—it meant yes, we’re good,” says Orenda. “Even after being in the new space for eight months we had been really slow, and I remember saying to Peter, ‘I don’t think Portland gets us, and I don’t know if they ever will.’”

On a busy Friday evening, it’s clear that Portland does indeed get Drifters Wife. Peter greets me and my companion with gregarious warmth and leads us past the packed bar to a round table for two near the back of the restaurant. Orenda stops by to say hello with the youngest of the couple’s three children, two-and-a-half-month-old Poppy, asleep in a carrier on her chest (all three have been born since the Hales moved to Portland). Across from us, a table of six is engaged in animated conversation, indicative of the mood of the entire room.

I’m eager to try some of the wines, but since I’ve also heard good things about the cocktails, my dining partner and I start with Mama Don’t—a frothy pink rum-based libation also named for a Cale tune—and the Martinez-esque, a version of the classic riff on the martini, made with Old Tom gin. With them, we nibble from a bowl of warm olives slicked with oil and herbs, and devour every bit of a hunk of earthy sourdough bread spread with softened dulse butter.

Our server, Lennie Newman, approaches our table with a white linen towel draped over her shoulder and a wide smile. She wanted to work at Drifters Wife to learn about the wines and has become both knowledgeable and deeply passionate about them. We put ourselves in her hands to choose wines by the glass with each course. I begin with roasted bluefish on a bed of kohlrabi sliced into discs. In our conversation earlier in the day, Jackson and the Hales joked about the chef’s “kohlrabi epiphany”—a method he developed to reduce the vegetable’s gaseous tendencies by blanching it in herb and citrus broth. The result is tender yet still slightly crunchy and makes a cool base for the hot bluefish, whose crispy skin topped with shaved horseradish gives way to just-done, slightly smoky flesh. With it, Newman pours a 2017 Nana Vins et Cie “Bubbly,” a lightly fruity, fizzy French rosé that balances the richness of the fish. A salad of Little Gem lettuces, sliced sunchokes both raw and crisply fried, black sesame seeds, and yogurt pairs with Fabien Jouves “A Table” 2018, a dry yet soft rosé blend of merlot and malbec.

Jackson changes his menu based on what’s in season and available at local markets, riding his bike to the Portland Farmers Market when the weather permits. His half chicken, however, is a constant. He rubs the flesh side with herbs and roasts the chicken between two cast iron skillets to create its exceptionally crunchy, golden brown skin. Tonight it is served with kale, charred onions, and roasted parsnips, and my companion, who prides himself on his roast chicken, proclaims it the best chicken dish he has ever eaten. I happily concur, stealing forkfuls of the meat with the perfectly seasoned vegetables and sips of the accompanying wine, Domaine Guion Bourgueil Cuvée Domaine 2016, a bright, minerally cabernet franc from the Loire Valley. My main dish is equally memorable, a seared and flaky fillet of hake on a briny bed of nettles studded with maitake mushrooms and pillowy mussels pulled from their shells. Newman’s wine pairing, Dominique Lucas Quintessence Haute-Savoie 2015, is quite possibly the most delicious white wine I have ever enjoyed. “It’s what Chablis wishes it could be,” she says, and while good Chablis is one of my favorite wines, I understand what she means. Honey-scented and clean with a lightly mineral, lingering finish, this is a wine I will return to Maine and Loire to buy.

The alchemy between wine and food is what makes Drifters Wife so distinctive, and so astonishingly good. Although Jackson’s menu looks simple on paper, the nuanced flavors and textures he and just two cooks coax from seasonal ingredients create dishes that both nurture and delight. “We don’t talk too much about what’s going into the food,” Jackson says. “We like to understate and overdeliver.”

The menu offers a single dessert, and tonight it is malabi, an Israeli milk pudding that Newman describes as “like panna cotta without the gelatin.” Drizzled with Concord grape reduction and sprinkled with fresh thyme, it is cold, silky, and refreshing. With it we share a glass of Clos Marfisi Muscat du Cap Corse 2015 from Corsica, which is sweet with a tart edge. As I sip it and gaze contentedly around the still-full dining room, I realize the word for how I am feeling is charmed—by the food, wine, service, and the deeply personal nature of the entire experience. The Hale-Jackson trio built a place to share what they know and love, and by just going for it, Drifters Wife has gotten it just right. 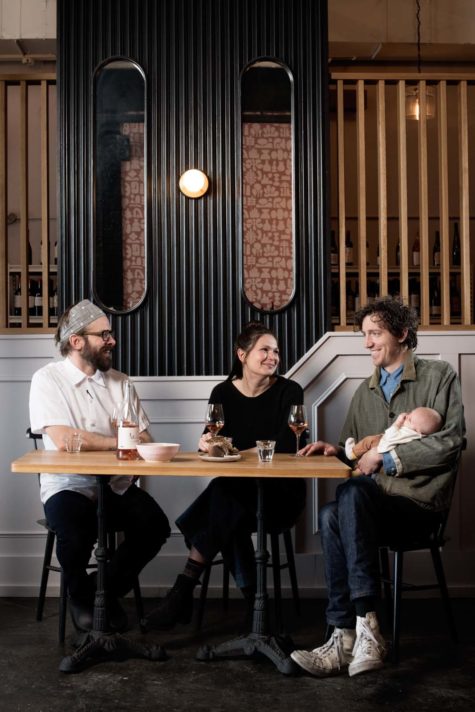 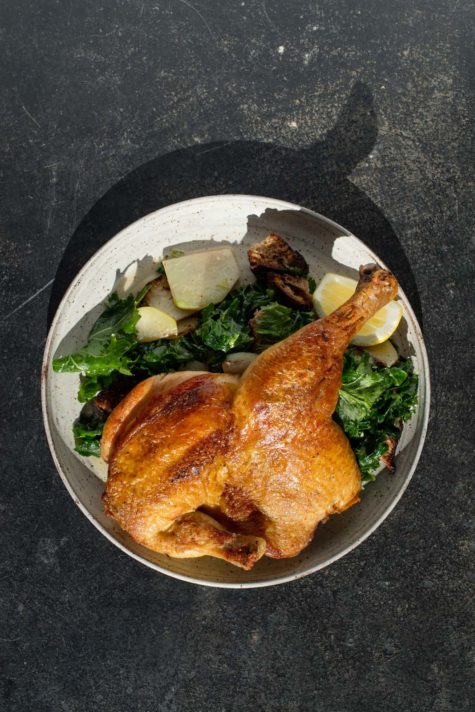 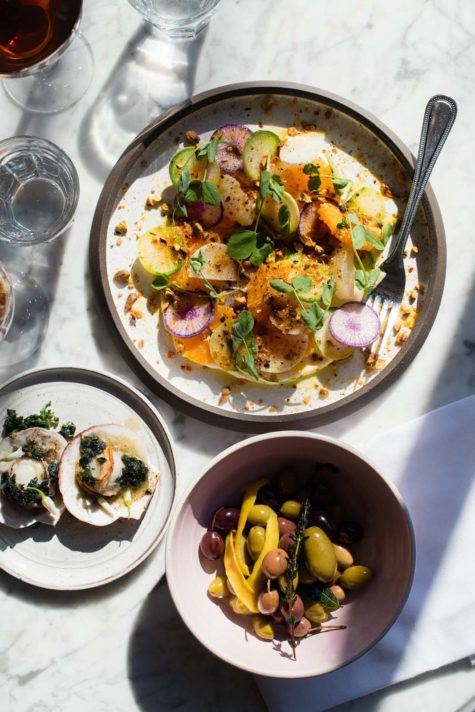