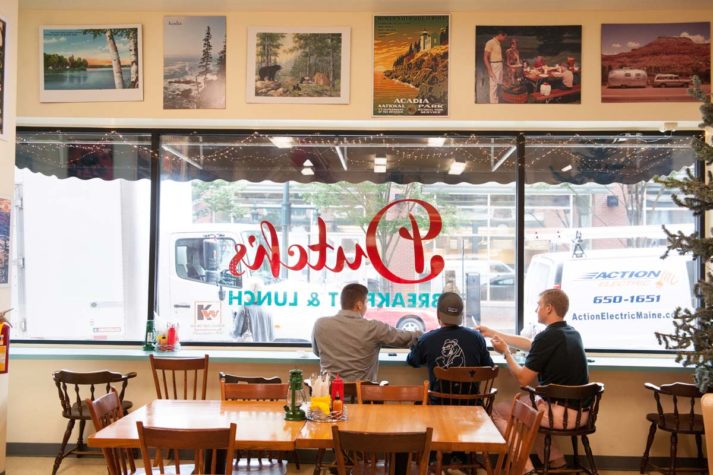 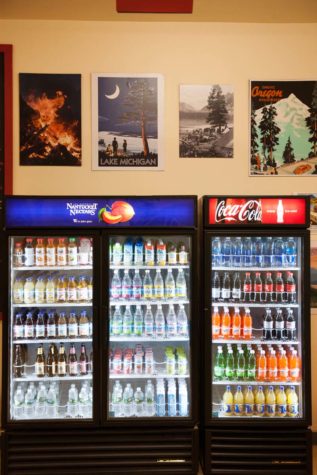 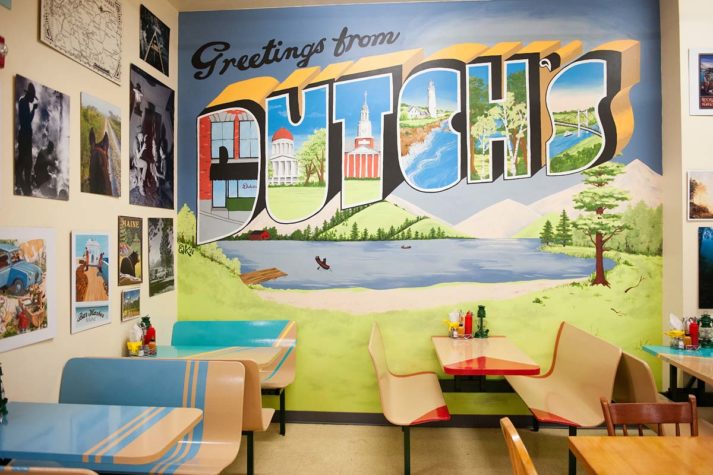 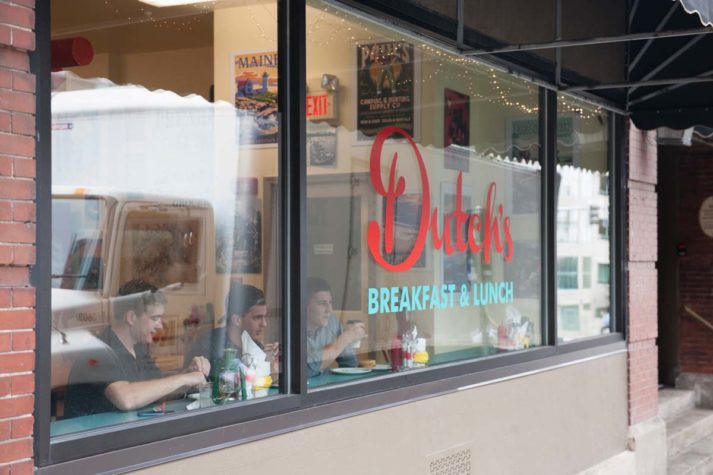 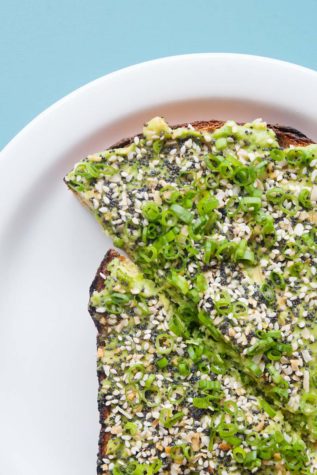 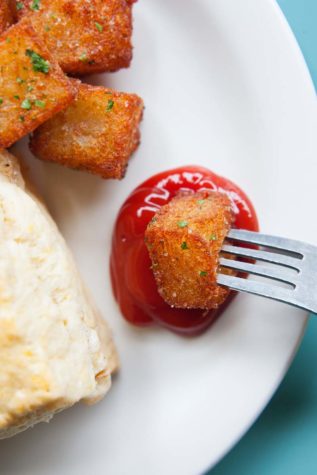 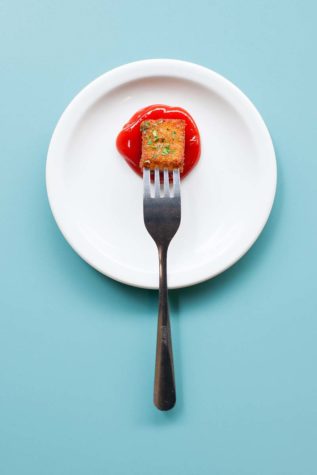 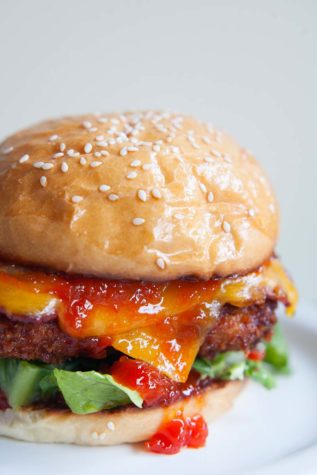 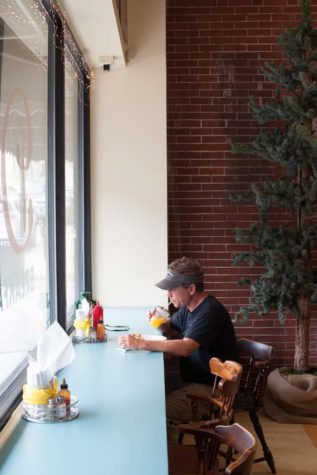 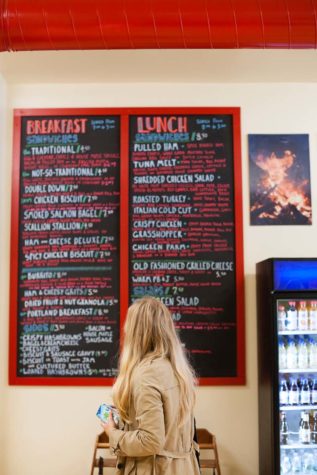 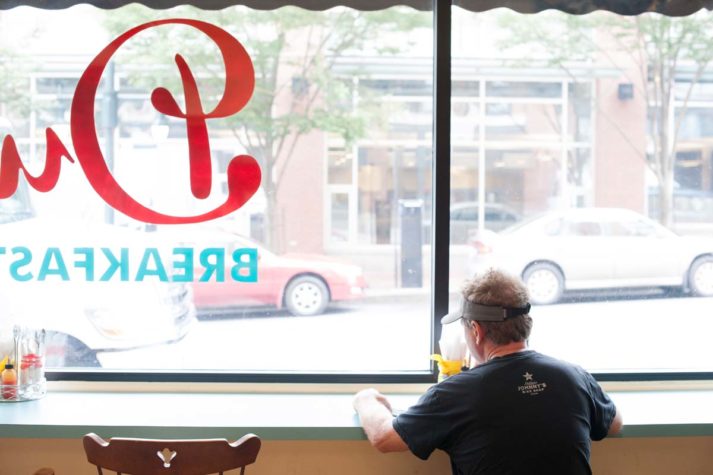 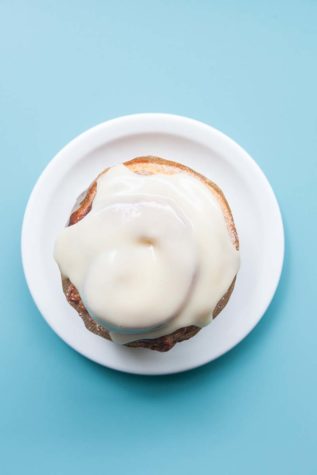 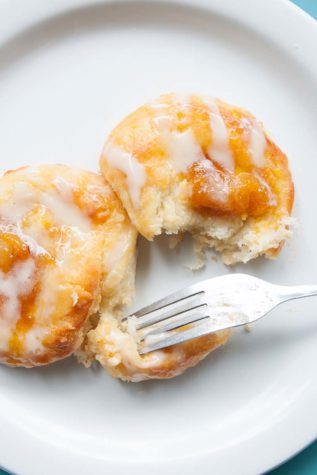 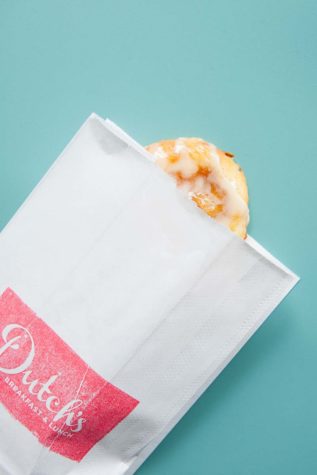 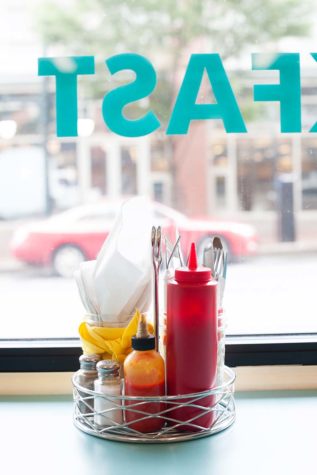 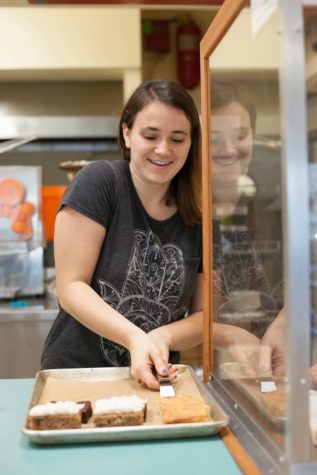 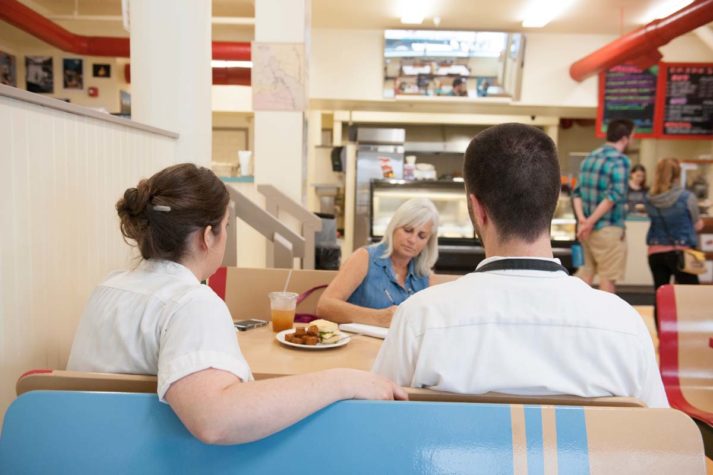 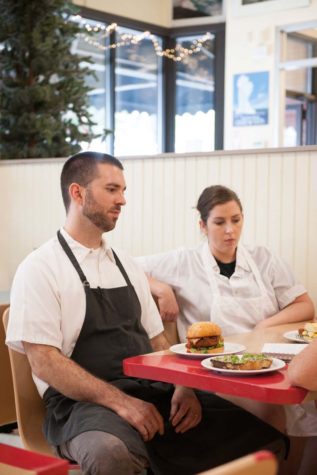 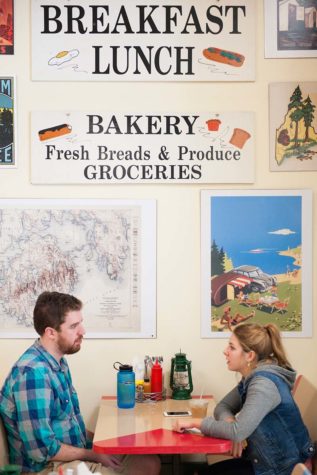 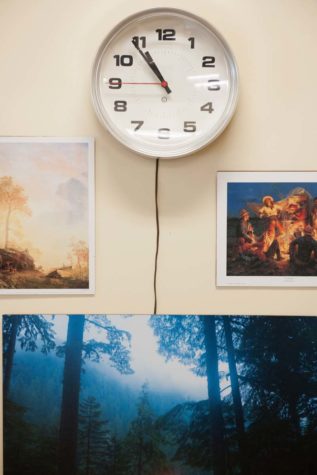 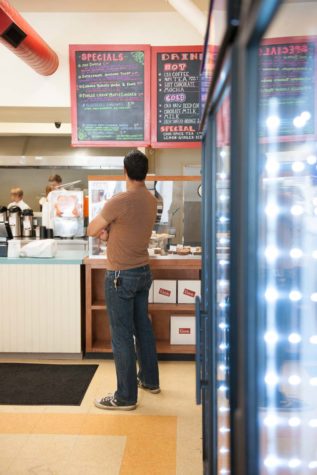 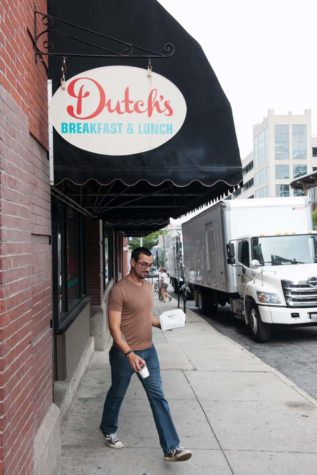 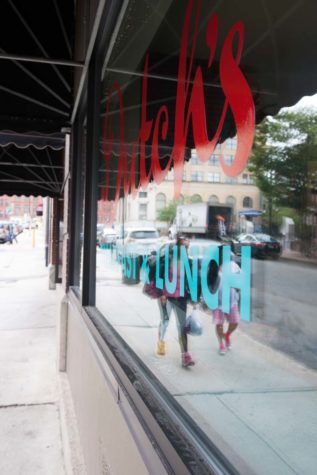 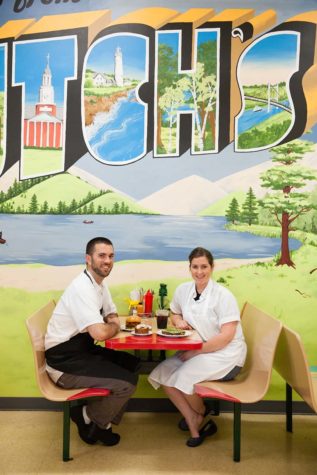 Maybe you never noticed the unassuming storefront with red and teal lettering on Preble Street, just off Monument Square. Maybe you’ve walked past it, a little curious. Or maybe, like me, you’re already a fan. After consuming many egg sandwiches with fantastic hash browns at Dutch’s, I was eager to learn about Lucy and Ian Dutch and how they came to open this homey, casual spot.

Ian, a Culinary Institute of America graduate, has worked for some well-known chefs, including Todd English and Jean-Georges Vongerichten. But the four summers that the couple spent as personal chefs to a family on Nantucket were his favorite. “There was always a dinner party, so we wrote new menus every day. Our clients never said no to anything, and we really developed our own style,” Ian tells me. They would spend the off-season doing stints at various restaurants, mostly in San Francisco. “We tried to pick places that were interesting; then we could use what we learned the next summer,” Lucy says. She spent time honing her skills at the highly regarded Bar Tartine, while Ian picked up experience in global cuisine.

The valuable experience in Nantucket and elsewhere made the couple realize they wanted their own place. They came back to Maine, Ian’s home state, ready to make that happen. They looked all over Portland, finally settling on the sizable spot on Preble Street, mostly because the kitchen was already built out. They worked hard to make the space comfortable and inviting, choosing a Vacationland theme. “Lucy was the vision and I was the muscle,” says Ian. He gave booths from an old pizza parlor a sharper look with paint, and Lucy chose a mix of vintage posters and graphic elements to line the walls. A large mural proclaiming “Greetings from Dutch’s” was painted by artist Evyonne Krawiec, reminiscent of the large lettered, iconic graphic from the 50’s. In every corner, there’s something fun to look at. The feel of the place, a little hip, a little quirky, dictated their decision to serve home-style, from-scratch breakfast and lunch.

The Dutches arrive by 5 a.m., so Lucy can get started on the six types of bread and several pastries she makes every day. From the flaky biscuits and English muffins to the country loaf and Dutch crunch rolls, all of Lucy’s baked goods are outstanding. She also makes croissants, bagels, Danish with seasonal fruit fillings, and a decadent cinnamon roll with cream cheese frosting. Come on the weekend if you want one of her filled doughnuts. “It’s a lot of planning and a little bit of hustle in the mornings to be open by 7 a.m.,” says Ian. He’s busy working on those irresistible hash browns, little crispy cubes of freshly grated potato, fried to order. “The hash browns have become a monster we have to feed,” he says. “We’re now going through almost 300 pounds of potatoes a week.” There’s a varied selection of breakfast sandwiches to go along with all those potatoes. You could get the Traditional, but I’m partial to the Not-So-Traditional with egg white, avocado, cheddar, and chimichurri on a biscuit. Or try smoked salmon with tobiko, tomato, and capers on a house-made pretzel bagel. Avocado toast with “everything” bagel seasoning, on that chewy country bread, is my favorite mid-morning snack.

At lunch, area office workers line up at the counter to order the crispy chicken sandwich on a buttery bun, a good old-fashioned grilled cheese, or the hearty red wine braised beef sandwich with crispy onion strings. Ian roasts all the meat in-house, and the pulled ham sandwich with pimento cheese, BBQ sauce, and mustard slaw is a lunchtime favorite. There are salads and soups as well, and you can finish up your lunch with one of Lucy’s cookies or fudgy brownies.

The Dutches seem to have a firm grasp of the kind of food people really like to eat, straight forward but with some unexpected ingredients that boost the homemade flavor. The eatery recently got a mention in Bon Appétit, and plans are in the works to expand bakery production so they can sell those fabulous breads. They’ve applied for a liquor license, which will let them serve brunch cocktails.

In the first year of business, when things were a little slow, Lucy and Ian’s motto was “live to cook another day.” I’m happy they did. 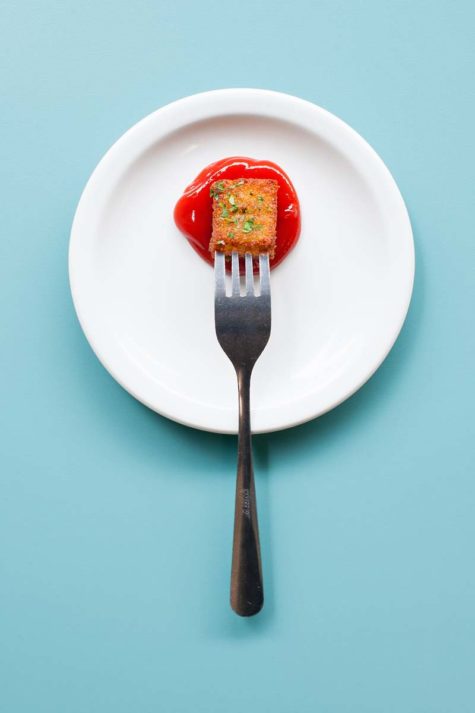 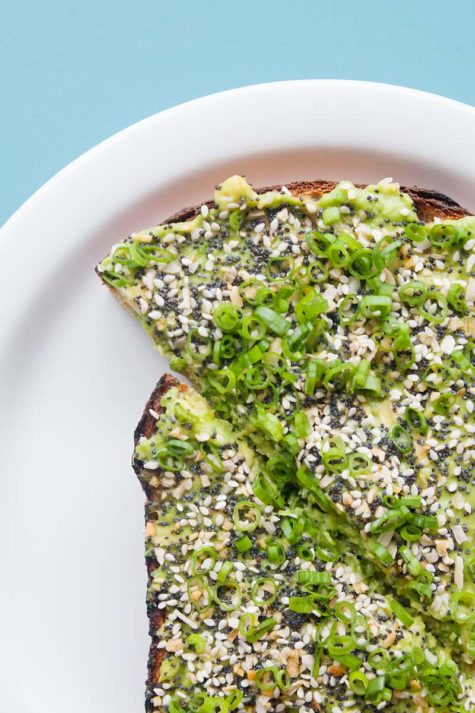