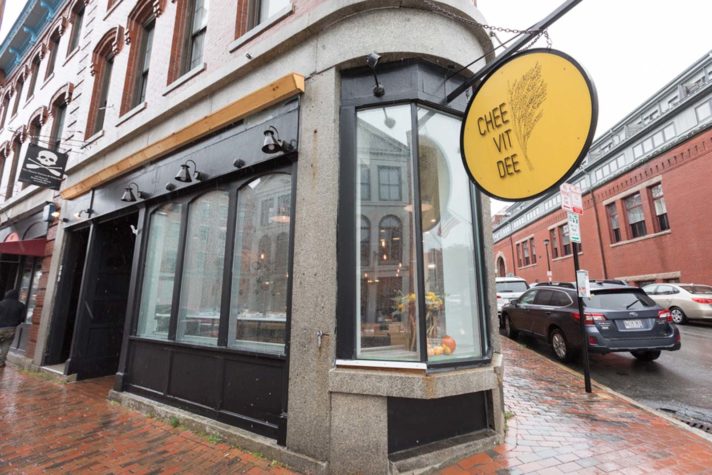 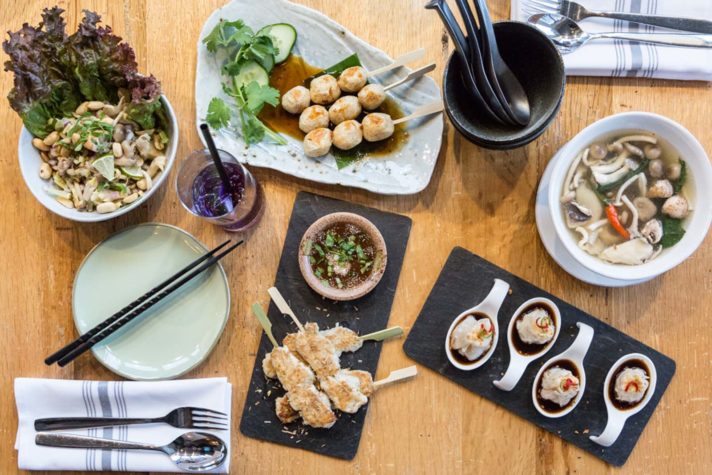 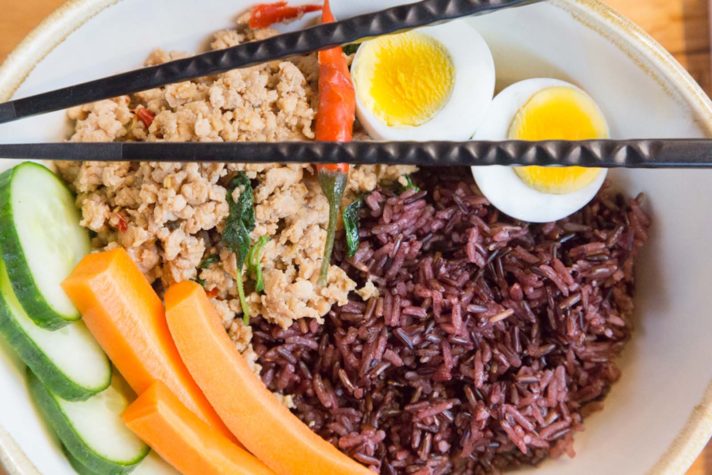 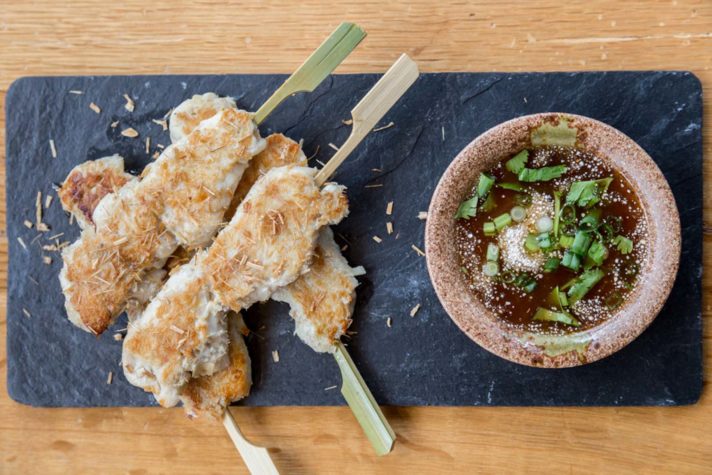 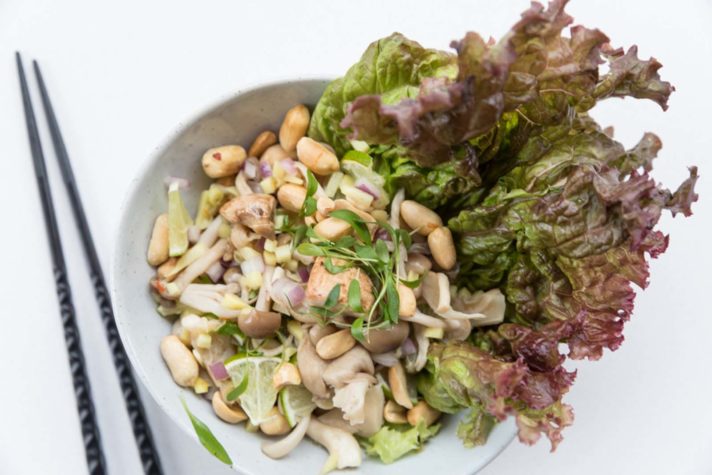 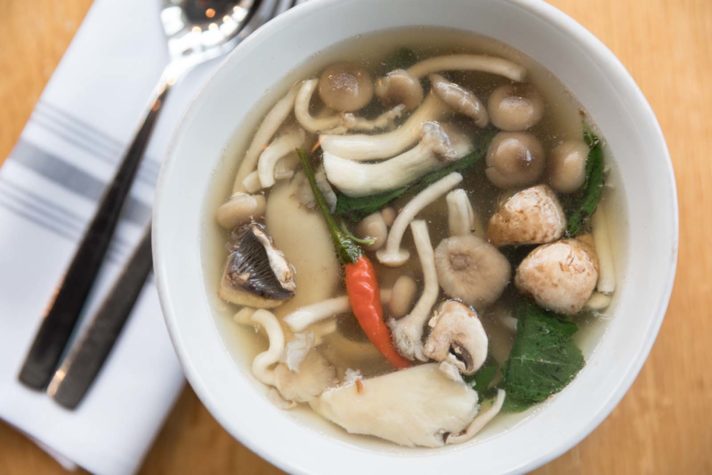 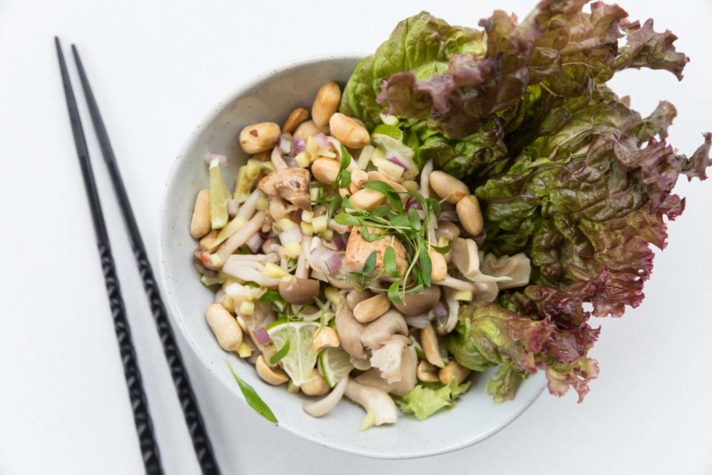 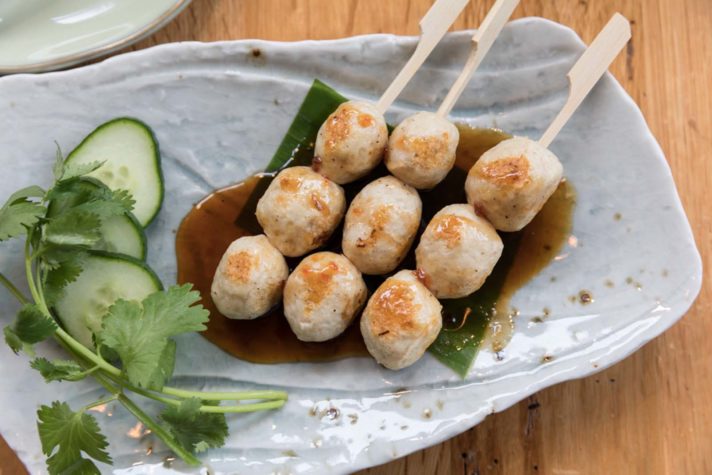 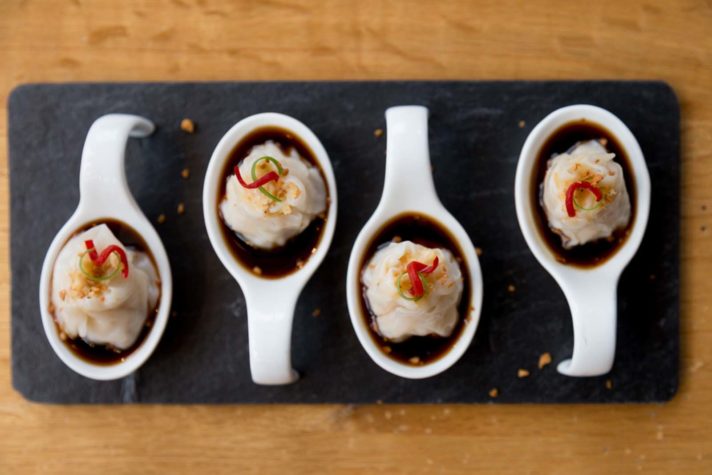 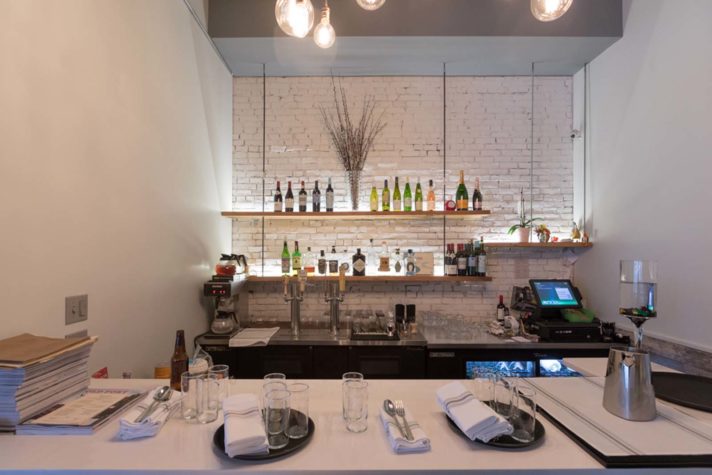 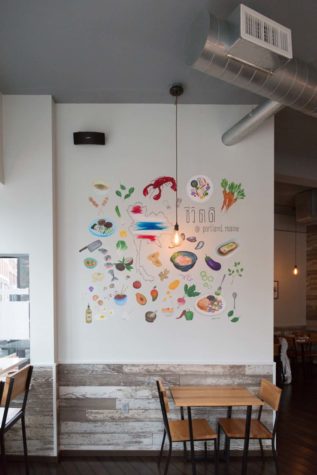 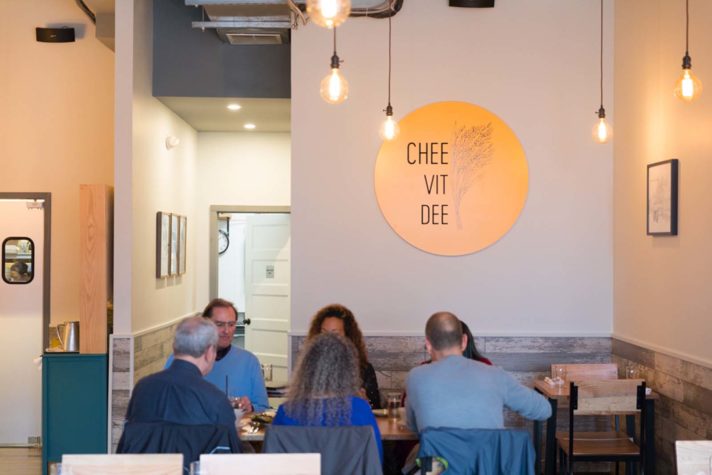 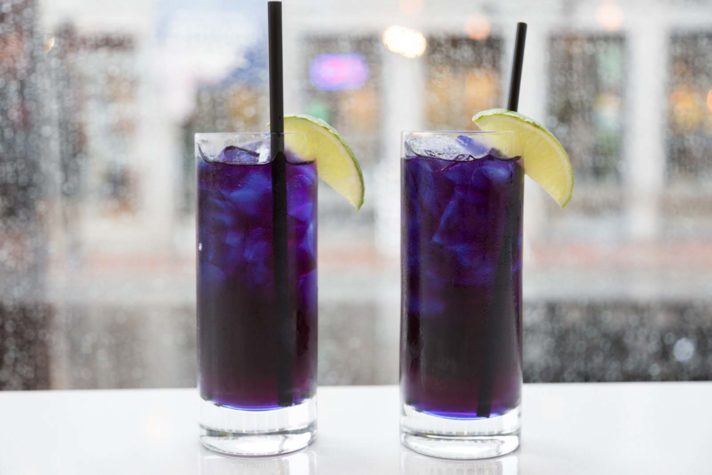 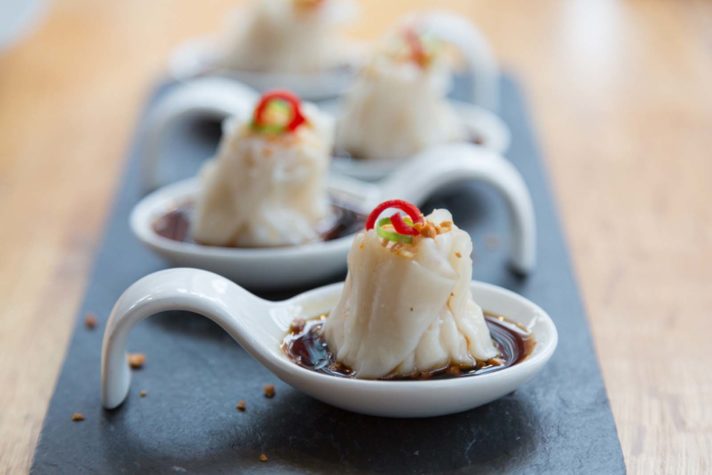 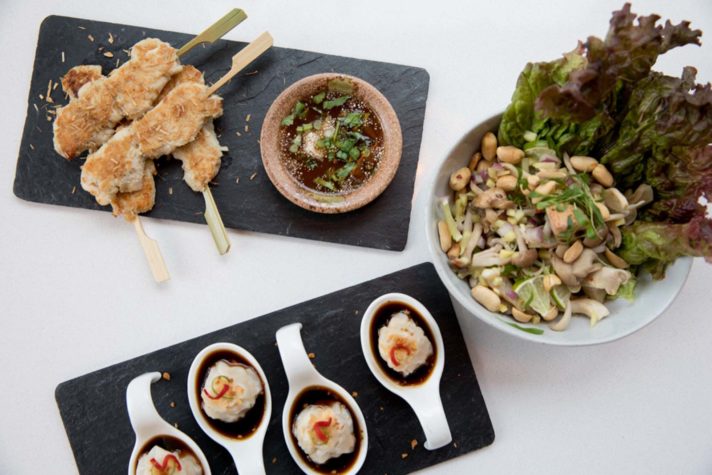 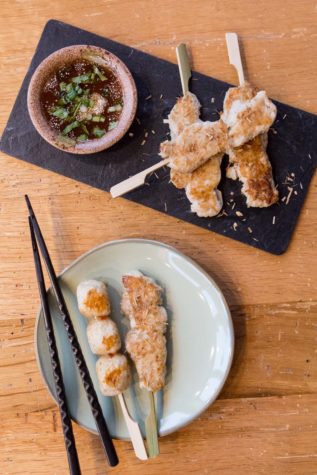 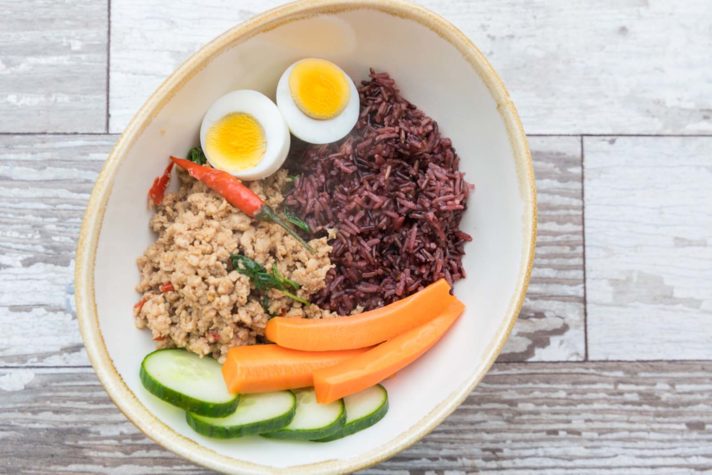 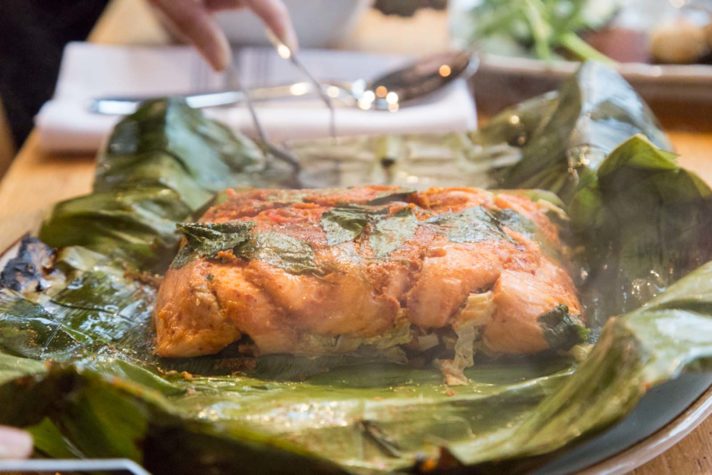 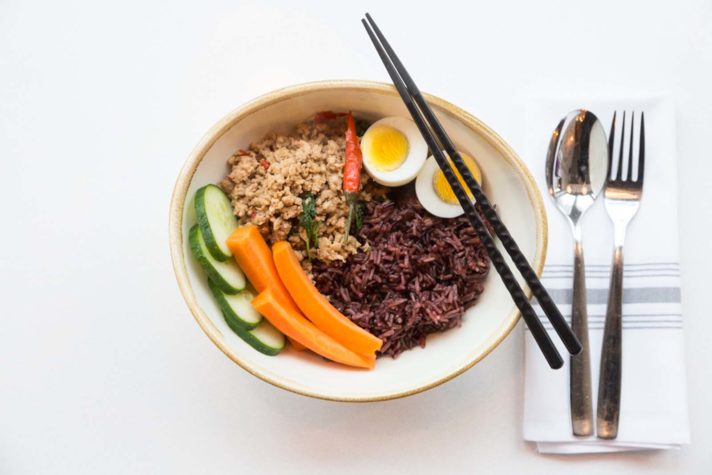 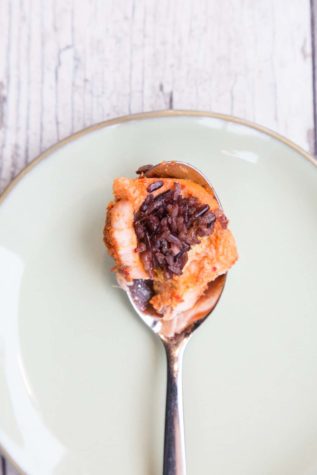 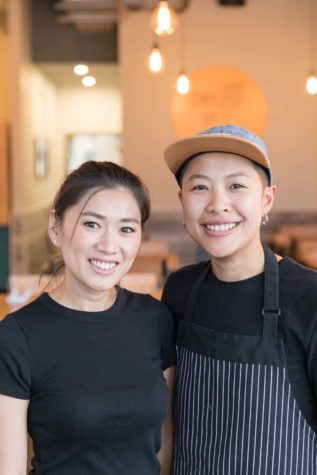 Four flavor profiles make up the foundation of Thai food: sweet, sour, salty, and spicy. But there’s one element that is rarely mentioned, and is important to the Thai cuisine experience: hospitality. At Cheevitdee on Fore Street in Portland, there’s a warm welcome from Nik Thonglamun, the server who is likely to remember your name after your first visit. His smile is infectious, and when he offers you a glass of butterfly pea iced tea, say yes. The blue-hued, lightly sweetened tea is a popular refreshment in Southeast Asia. Add a squeeze of lime, and watch it turn a deep purple-red. “It has good benefit and can help your eyesight,” Cheevitdee co-owner Nuttaya Suriyayanyong tells me.

The tea is just one of the many options at Cheevitdee with healthful attributes. While the flavors are similar to the Thai offerings you may be familiar with, the dishes and their preparation are quite different. “We have nothing like pad thai,” says Suriyayanyong. “We haven’t found a way to make it healthy yet. It was hard to understand at first.” Pad thai, everyone’s go-to Thai dish, is often loaded with oil and sugar, two things that Cheevitdee tries to avoid. “We try to eat healthy food at home,” says Suriyayanyong. “Then we thought, why don’t we cook what we eat?” The menu was developed by chef and co-owner Jay Pranadsri, who is also Suriyayanyong’s cousin and owns Mi Sen (a popular restaurant and noodle bar on Congress Street). Curry paste is made in-house, a piquant blend of “herbs and spices that are good for you.” The paste is used in several dishes, including the beautiful and dramatic ping ngob, or grilled salmon curry. The fish filet is coated with the paste, some chilies, and a few leaves of Thai basil, then placed on a bed of riceberry. The whole thing is wrapped in a green banana leaf and grilled, making a spicy, smoky dish that’s unwrapped at the table. Riceberry, a purplish-brown whole grain, is used at Cheevitdee instead of white rice. It’s a hybrid of three Asian rice varieties that’s high in antioxidants minerals, a little earthy in flavor, but with a fluffy consistency. Yum hed, a fresh mushroom salad, encompasses all the classic Thai flavors using ubiquitous ingredients like chilies, lime, ginger, and lemongrass. There’s a variety of mushrooms from North Spore Mushroom in Portland and a scattering of crunchy peanuts. “It’s good with skewers,” says Suriyayanyong, referring to the gai ta krai, lemongrass chicken on a stick, and luk chin ping, tiny grilled chicken meatballs. The kitchen handles another Thai classic, tom yum nam sai, deliciously. The delicate chicken broth holds chunks of salmon, mushrooms, and basil, making it a warming and flavorful bowl. I’m overwhelmed by a big bowl of pad kra pow. The ground chicken is simply garnished with a hardboiled egg, carrot sticks, and riceberry. But one bite changed my mind, proving that appearances can be deceptive. The chicken is wonderfully seasoned with Thai basil and other spices, making it a real sleeper that shouldn’t be overlooked.

Suriyayanyong is an experienced restaurateur. She came from Thailand 17 years ago and has worked at and owned restaurants since. Her aunt owned the former Sala Thai on Washington Avenue in Portland, so restaurant work is a family affair. She also owns a restaurant called 5 Thai Bistro in Portsmouth, New Hampshire, splitting her time between there and Cheevitdee.

Suriyayanyong wasn’t looking to double her workload, but when the space on Fore Street became available, it seemed like an opportunity too good to pass up. It took Suriyayanyong and her crew nearly ten months to transform the space. Now the room is spare and light, with simple wooden tables and white walls. Big windows are good for watching the scene in the Old Port. A painted mural graces one wall, featuring a map of Thailand with the colors of the Thai flag and images of traditional Thai ingredients. There’s a small bar area, offering a good selection of wines by the glass and bottle, as well as beer. There are several Maine brews, and a light and fruity Chang beer from Thailand goes well with Cheevitdee’s food. The restaurant has gained a following of regulars, particularly Old Port office workers in search of something more interesting than a sandwich. “If you have good food, you have good life,” says Suriyayanyong. 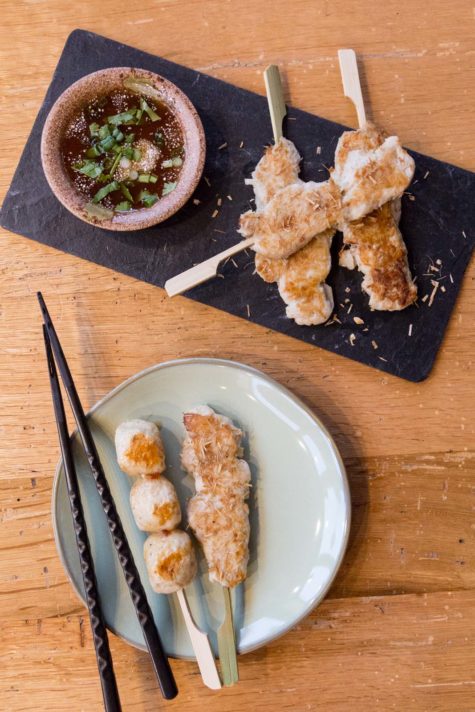 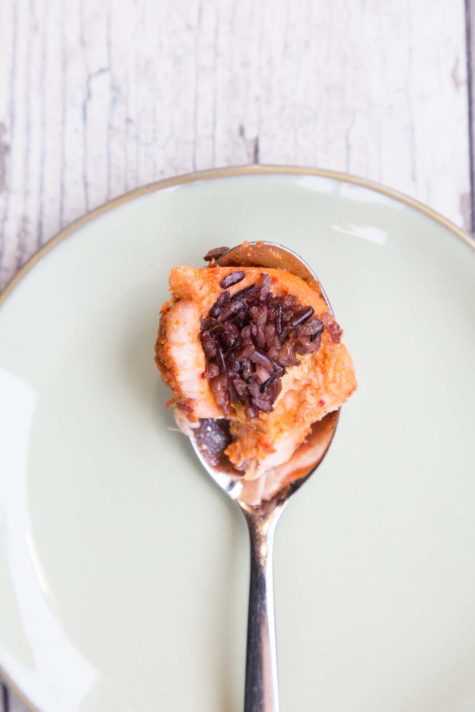