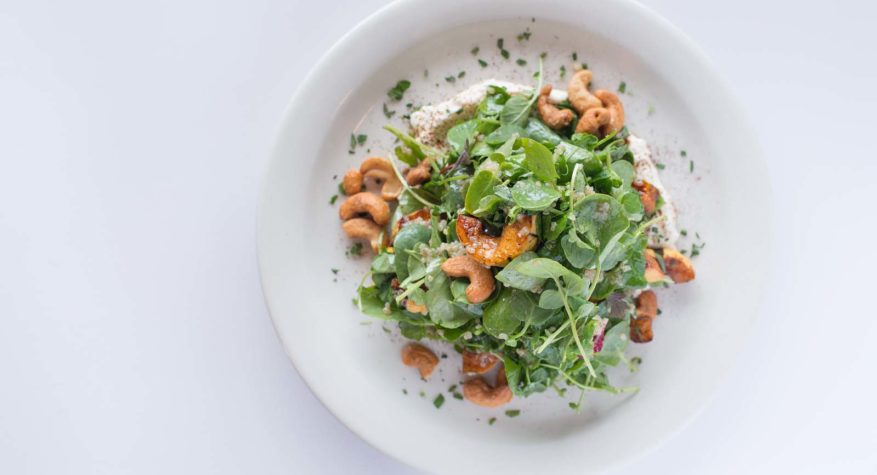 Seasonal dishes, including a delicata squash salad, round out a menu full of traditional standards. 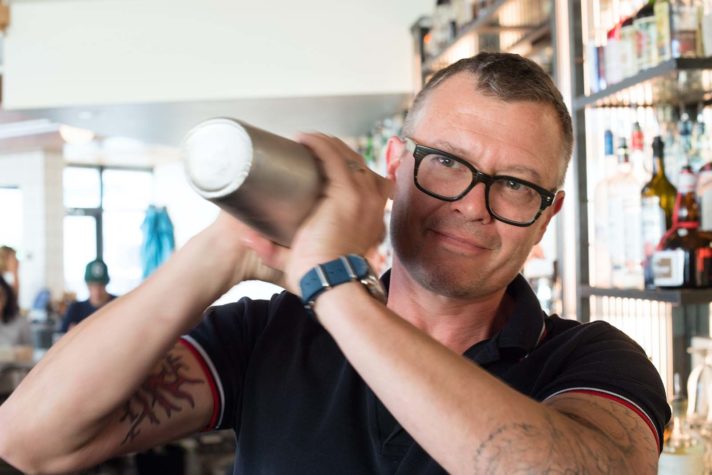 “Hospitality done right can be an extension of the welcoming comforts of home and hearth,” says co-owner Birch Shambaugh. 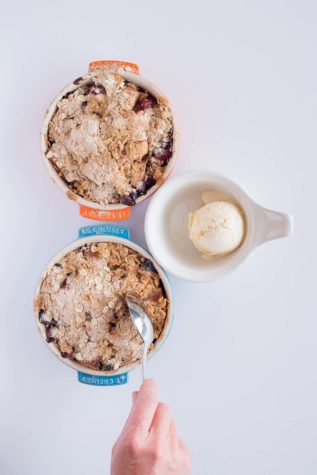 A homey, delicious fruit crisp features the best of the season’s bounty. 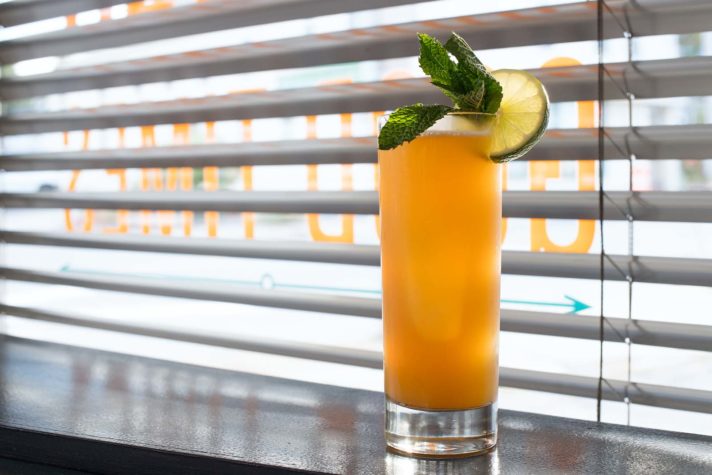 Specialty cocktails, like the Fog Mull grog, are thoughtfully created and beautifully crafted.

The Heart of an Evolving Portland Neighborhood

There’s a revitalization happening at Woodfords Corner. The area, where four neighborhoods come together, is not just getting a facelift; it’s getting a new life. The two flatiron-style buildings that frame Forest Avenue are being updated to preserve their brick exteriors. The clock tower, in the building that was once the town hall for Deering before Portland annexed the town, is lit up and working for the first time in decades. New businesses are opening—a coffee shop, an art gallery, a photography collective, and a juice bar—joining the already well-established breakfast spot, seafood market, art supply store, and bakery. It’s all happening where, 100 years ago, a trolley traveled Forest Avenue from the downtown to Deering. And Woodford Food & Beverage is right where it wants to be, smack in the middle.

“We’re extremely pleased and honored to be a part of the revitalization,” says co- owner Birch Shambaugh, who opened the restaurant with his wife, Fayth Preyer, two years ago. “Most people were serious naysayers when we told them what we were planning to do out here,” he continues. “But as we did our due diligence and immersed ourselves in the neighborhood, we became convinced there was a possibility for vitality and always hoped this might come to pass.” The city of Portland released a plan to transform Forest Avenue in 2012, “roughly the same time we were thinking about diving into the restaurant business,” says Shambaugh. “The potential for growth and change in an interesting fashion became clear to us.” The couple and their two young children make the neighborhood their home as well. “The neighborhood has changed a lot since we bought our house almost a decade ago,” Shambaugh says. “Now there are more strollers and lots of kids, including our own, at the school bus stop.” The project to upgrade the intersection aims to improve walkability in the area and alleviate vehicle congestion. Woodford Food & Beverage, as well as other businesses, wants its corner of Portland to invite exploration. A sculpture by Portland artist Aaron Stephan will anchor a new emphasis on public art.

The restaurant itself is an integral piece of the visual character of the neighborhood, a rare vestige of midcentury modern architecture in the city. Originally a Valle’s Steak House, the building was the gathering spot for families a generation ago. “I smile every day when I come to work and see this building,” says Shambaugh. “It’s always stopped me in my tracks. The more we learned about our own neighborhood, the more potential we saw for this storied building to become a restaurant again.” The building had most recently been home to a mortgage office and it needed to be stripped right down to its impeccable bones. The interior took shape based on a vision combining the best of American roadhouse and French brasserie- style dining. Upholstered booths line the windows facing Woodfords Corner, with a row of tables opposite them. The bar has the feel of an old-fashioned lunch counter, its zinc top earning a burnished patina. The black Naugahyde stools surrounding it lend a kitschy lounge feel.

“The only type of place we were ever interested in opening was a neighborhood restaurant,” says Shambaugh. “But what makes a great neighborhood restaurant is subjective and pretty difficult to define. It’s been an evolving process and an ongoing dialog among me, Fayth, and chef Courtney Loreg. It’s a long-term relationship with your customers and community, which requires a level of honesty, genuineness. They know you, you know them, and you have to care about delivering a space and experience that’s welcoming and compelling on a regular basis.” Drawing on the memories of other great neighborhood restaurants they’ve loved, and nostalgia for Valle’s, the three worked to create that same feeling of connection. “We want you to be comfortable bringing the family, including kids, but you could also sit alone at the bar, read a magazine, and order a drink and a burger. It’s also a place to step out and celebrate a life event. To be all those things at once, those are the kind of places we love most. Valle’s was that, and we aim to be like that,” Shambaugh says.

“The menu’s design also echoes that feeling of hospitality,” says Preyer. “There are old, reliable house favorites, touchstones that will remain. But we bring seasonality to other parts of the menu. Seasons come and go, but the burger or steak frites always remains the same.” That’s a relief to the many fans of Woodford’s burger, a beefy beauty topped with smoked bacon, grilled onions, cheddar cheese, and house-made pickles. “We spent a lot of time with Courtney considering some of the bygone classics,” says Shambaugh. “She has deep skills and a broad vernacular that really lets us express the idea.”

Loreg presents us with a gorgeous pork shank in a luscious pool of braised white beans with bacon, tomatoes, and a generous amount of butter. The meat is fall-off-the- bone tender, deeply flavorful, and finished with fried shallots and bread crumbs. It’s a riff on French cassoulet, reinterpreted but maintaining the legacy of a classic dish. “We always thought about this place as the sweet spot where brasserie meets diner, with updated takes on dishes you recognize but haven’t encountered the way we’ve envisioned it,” Shambaugh says. “All the dishes pick up those themes of comfort and familiarity, but we have room to run.”

Loreg brings a profound level of creativity and experience to her work. She’s classically trained and naturally curious. In Woodford Food & Beverage’s first year, the menu didn’t change often. Stability was the goal at that time. “I’m super excited to say that in the past eight months or so we’ve come closer to how we think it can best be done. We’re able to change with the seasons, and the menu has evolved to a much closer version of what we want,” says Shambaugh. “The menu is really just a baseline, a framework that we can layer upon. This is now Courtney, less confined.” Loreg creates daily specials, including two or three types of house-made pâtés. “We’ve become known for our old- style terrines and pâtés,” she says, offering a plate of head cheese accompanied by cornichons, pickled spring onions, toast, and mustard. The salmon rillettes is a particularly popular offering, and people have been known to call ahead to see if it’s available.

The pâtés and many other house favorites— steak tartare, oysters, and classic deviled eggs—partner well with the cocktail list curated by Shambaugh. “The cocktail menu has gone through the same process as the food menu,” he says. “It’s really become a lab for experimentation.” He’s got a soft spot for variations of the Manhattan, conjuring up one called the Oakdale Special. “It’s named for the neighborhood that’s so dear to us,” he says of the blend of rye, Cynar, sweet vermouth, and double oak bitters. The housemade bitters are made by charring oak harvested from a majestic tree in the family’s yard. In the dark days of winter, Shambaugh presents his versions of grog, spicy, citrus-laced rum concoctions. His Fog Mull grog is uplifting, a spiced pick- me-up perfect for when you think winter might never end. “If we have one sweet spot, it’s simple, strong cocktails,” he says. “We delight in drinks that somehow coax satisfying complexity from relatively simple ingredients and combinations.” Woodford Food & Beverage’s bar is quite a sweet spot, too, drawing in neighbors and friends meeting up at the end of the day. A North Deering resident enjoying a glass of wine at the bar tells me, “I love staying here in my neighborhood. The Old Port is busy. It’s comfortable here.”

Shambaugh and Preyer hope the makeover of Woodfords Corner will bring a new sense of place to the area. “We have no illusions that the experience here is the same as the Old Port. It’s very different out here,” says Preyer. “We’re off the beaten path, and it’s fun to play that role,” Shambaugh adds. “We’re excited to learn that people have had a couple of great meals at some of the really well-known spots like Fore Street, and then on the last night of their trip they’re traipsing out Forest Avenue to see us.” Sunday brunch has become a draw, both for visitors in search of a fun way to cap off a weekend and neighbors seeking an opportunity to catch up with each other. It’s also another chance to absorb the character of the area, perhaps taking a walk afterward to see what’s new and improved.

“What comes next, at the end of construction, is going to be really interesting,” says Shambaugh. “We feel the momentum tangibly, every day. This is meaningful change.” He and Preyer are in it for the long haul, committed to Woodfords Corner as a village and a vital part of the Portland landscape. “This is what we’ve made our lives about,” he says. “It’s all encompassing, all consuming. We’re trying to earn our place in the community.” 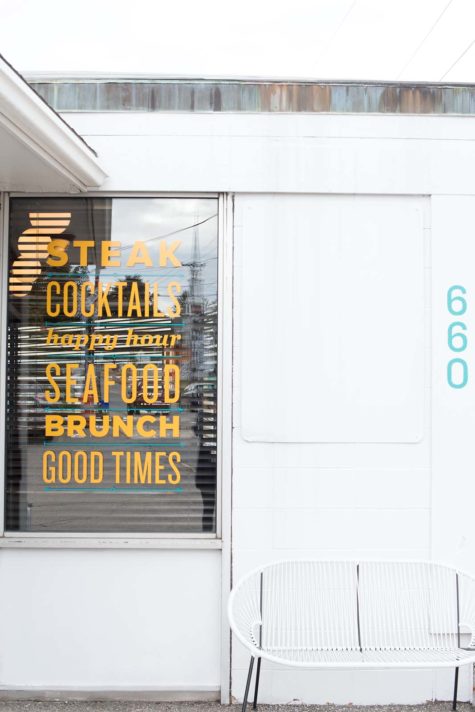 This month marks the restaurant’s two-year anniversary as an off-the-peninsula destination and neighborhood favorite. 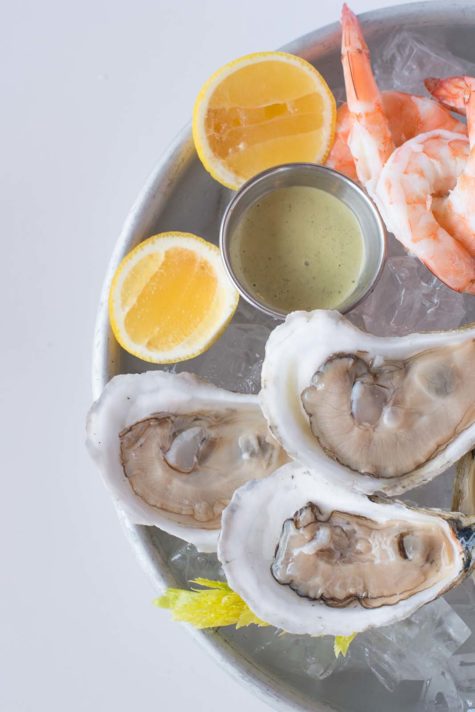 Oysters and other fresh Maine seafood are an excellent start to lunch, brunch, or dinner. 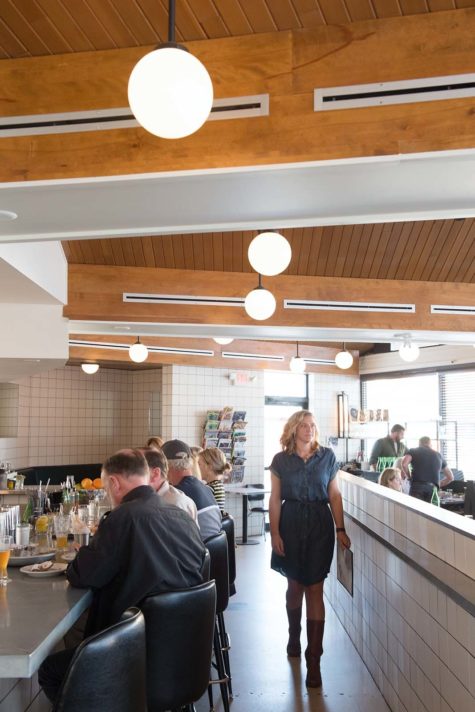 Woodford Food & Beverage appeals to all ages, from families with children to older people enjoying an evening out to neighbors sipping a drink at the bar.