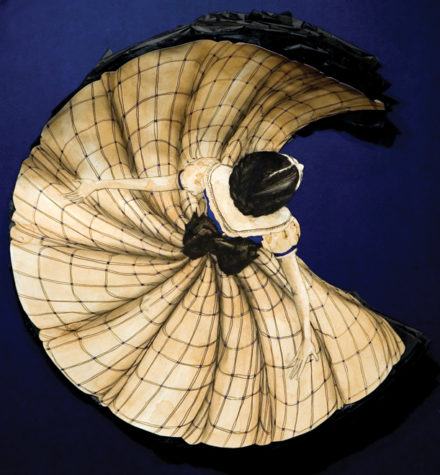 Lisa Pixley tells stories. How she moved to Maine on her own when she was 19, how she always intended to be an artist. “Growing up, it was rare that I was praised for something, and I was good at drawing, so I worked extra hard at it.” How she put herself through the Maine College of Art and graduated in 2007; it took her ten years. That extra time has given her a sure hand, and she deploys her brilliant technique to express her inborn, fearless instinct for emotion. She looks for inspiration in comic books and graphic novels—and in Renaissance art. The point of her work is to tell stories, too.

This large figure forms the centerpiece of an installation, Four and Twenty Blackbirds. She is Mary Todd Lincoln, known for her extravagant dress and unhappy life, a woman, Pixley says, who was “swept up in history.” The other panels spin around this one.

This is a bird’s-eye view of the figure. Her skirt twirls, a big circle with the front slice cut. Her head is a circle, too; only her nose protrudes. Remember the nursery rhyme:

The maid was in the garden / Hanging out the clothes. / Along came a blackbird / And pecked off her nose.

Pixley’s drawing is spontaneous, supple, and elegant. The woman’s big bow could belong to a happy Disney princess, but the bow is black, the color of mourning. The colors are startling: tea-stained flesh, that shiny black, inky, violent blue.

Pixley plays with the poem’s literal meaning: a nose, the pie, the birds (“I wanted to draw what a pie of birds looks like”), as well as her own darker associations with money, class, war, and a violated girl.

The narrative evolves through mutating forms. The maid’s skirt morphs into the pie; the pie becomes a coin; running soldiers take flight as blackbirds.

“When I’m doing these installations I carry around a little kit, with stacks of paper, a charcoal set, and pens,” Pixley says. On the spot, she draws panels and scatters them across the wall. And she does not stick to two dimensions. Mary Todd’s shimmering plaid skirt floats over black crepe paper crinolines.