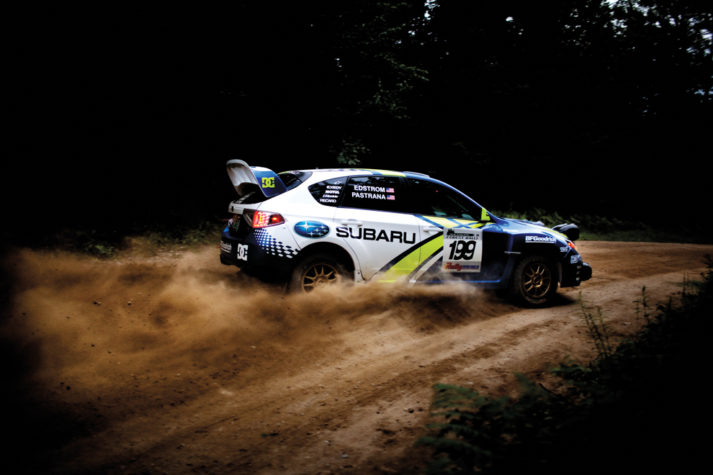 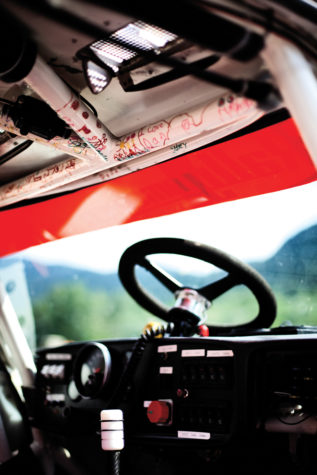 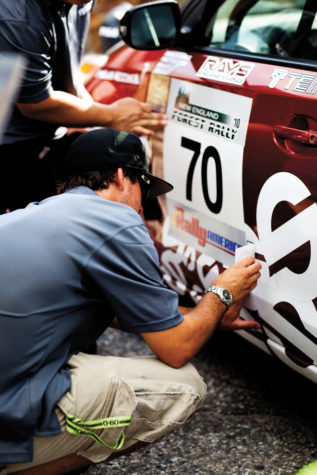 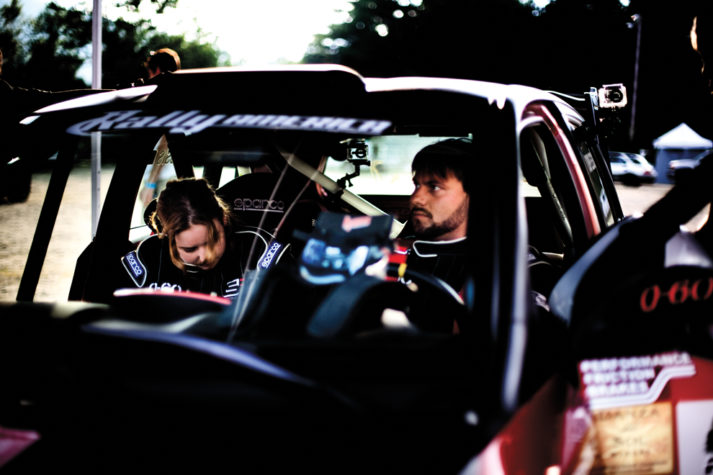 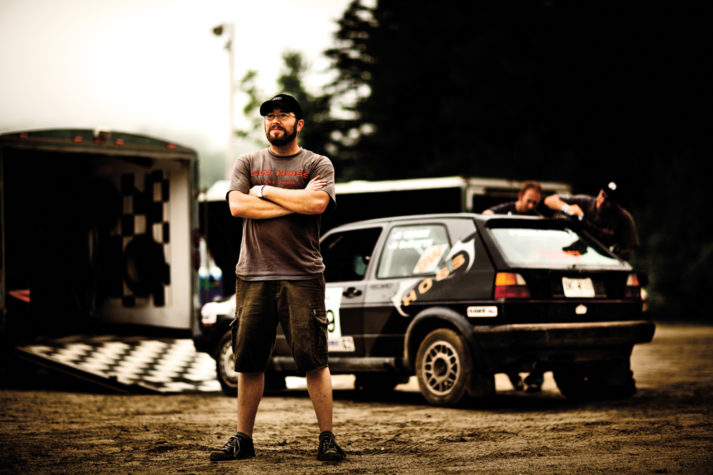 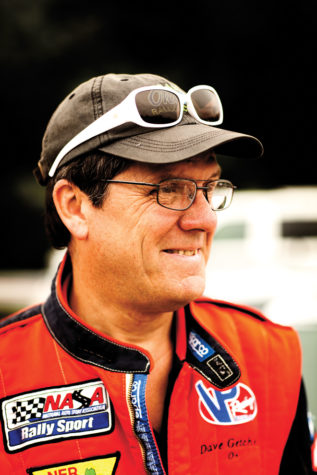 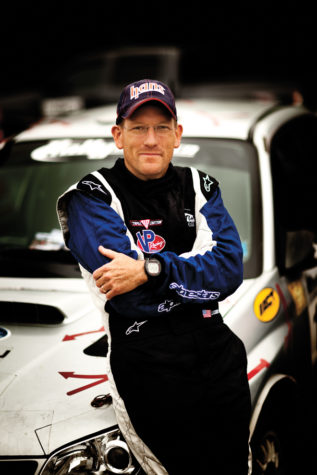 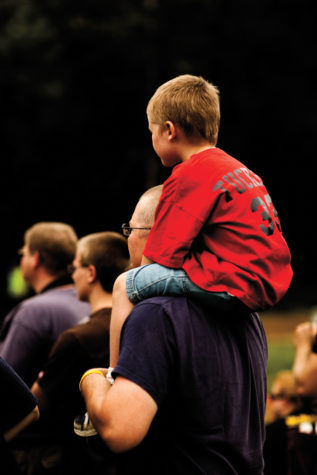 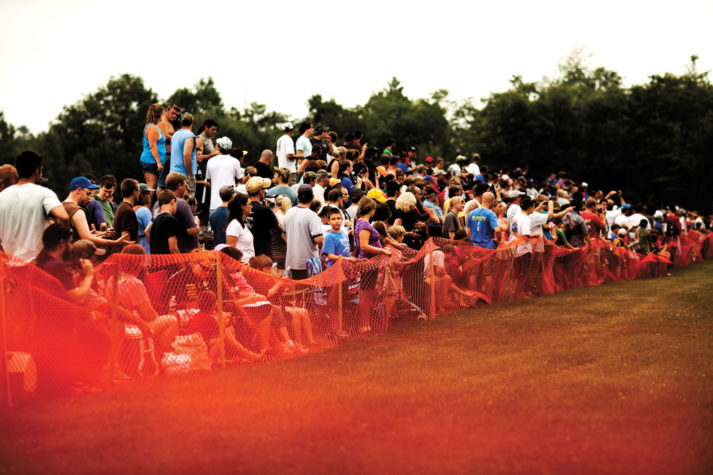 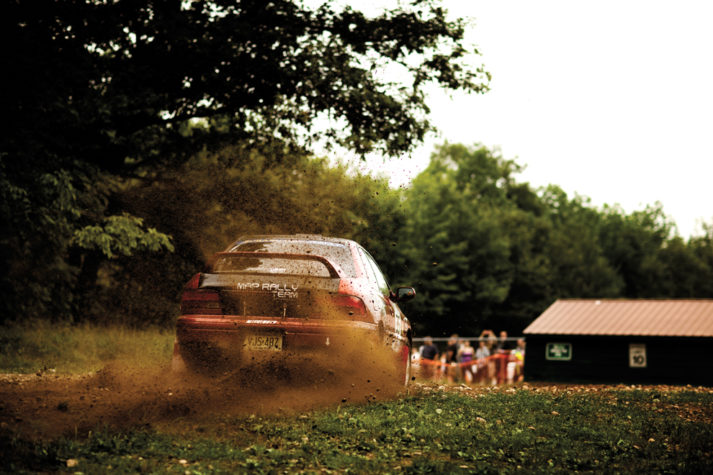 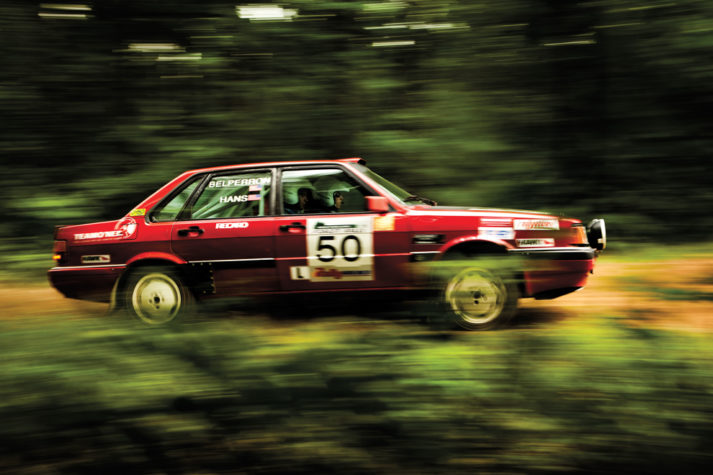 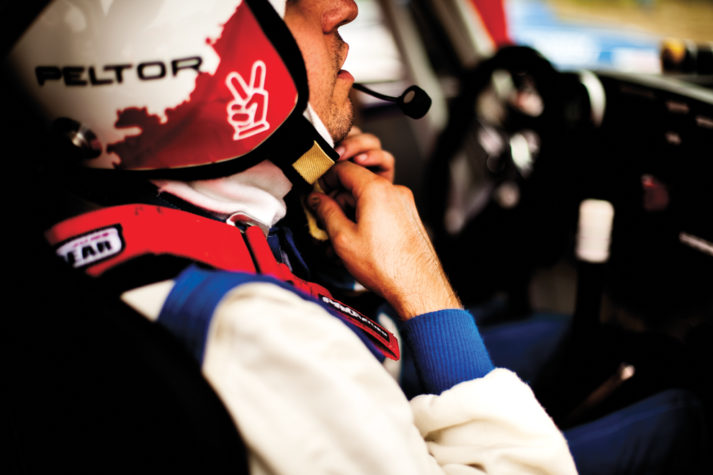 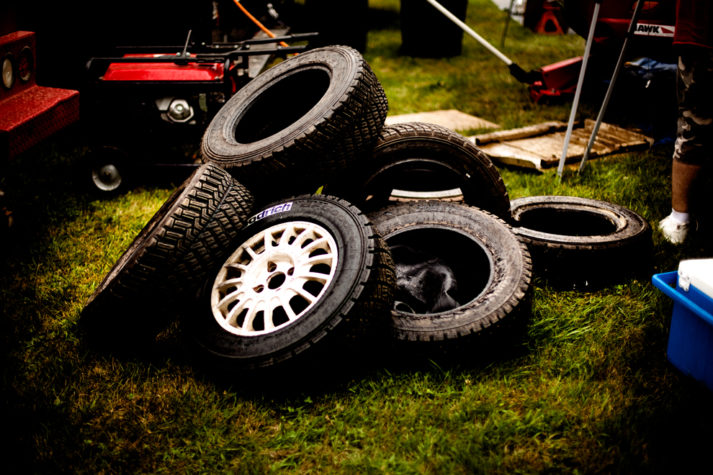 The New England Forest Rally attracts thousands to Western Maine every year. These car enthusiasts would spend every penny to participate in this three-day adrenaline rush over logging passes and closed dirt roads. And that’s just the fans.

An Audi with “00” taped to its side makes its way along a dirt road lined with spectators.  An announcer shouts, “The track is hot!” The crowd goes silent with anticipation. Eventually, a far-off buzzing grows louder until a compact sedan complete with roll cage and sponsorship stickers careens around the corner and leaps over a dirt mound in front of a row of makeshift bleachers. Dust flies everywhere. A handful of fans run alongside, hoping to glimpse the car as it takes the next corner.

This is the New England Forest Rally.

Made popular initially in France, rally car racing is nearly as old as the automobile. Historic images of enthusiasts racing over farmland and unpaved roads from Paris to Madrid bring to mind Chitty Chitty Bang Bang mixed with Cannonball Run. It was sanctioned in the United States in 1944 by the Sports Car Club of America, and taken over by the Minnesota-based Rally America in 2005.

Today, forest rallies—an offshoot of the original rally races—are an adrenaline rush at 120 mph over backcountry roads that serve as multiple dirt courses, or “stages.”

On July 16 and 17, modified turbo-charged production cars, such as Subaru Imprezas and Ford Fiestas, kicked off the fifth and final round in the Rally America National Championship, which took place in and around Newry, Rumford, and Mexico in Maine, as well as parts of New Hampshire.

This year, sixty-five teams—many composed of Maine residents—entered the New England Forest Rally, but not everyone made it through. And, as the announcer stated when a driver cautiously took a jump, “You have to finish it to win it, folks.” Travis Pastrana, last year’s New England Forest Rally winner and a crowd favorite hailing from Maryland, took the jump a bit more aggressively. He was already out of competition, and was “just having a little fun” according to fans in attendance.

As you can imagine, most rally drivers wear fire-retardant suits and helmets equipped with microphones. The driver and co-driver are strapped into tight bucket seats inside a roll cage with dual shoulder straps secured by a central buckle. Their helmets are affixed to shoulder and neck guards, rendering big movements nearly impossible. Trust between driver and co-driver is critical. Both must be able to communicate effortlessly and think a few steps ahead of the action.

“I’ve been riding with my co-driver for eight years,” says Bangor resident John Cassidy. A physician’s assistant in a homeless shelter, Cassidy and his co-driver Dave Getchell race in a 2003 Subaru WRX, a popular make for rally cars.

Unlike traditional rally races, in which cars travel 1,500 miles and the navigator determines the best route, in a forest rally co-drivers shout instructions to the driver from “pace notes” for upcoming obstacles, track conditions, or hairpin turns.

According to co-driver Kristin Przybysz, the typical note “R5-/smCr 70 L4 loose” would be read, “Right five minus over small crest, seventy, left four loose.” From this information, the driver ascertains that a fast right corner is coming up that leads to a small crest in the road before a run-out of seventy meters and a moderate left turn on loose dirt.

Przybysz, number two co-driver in the eastern championships and a Casco native, started volunteering at rally races after seeing race footage online. She got her shot to be a co-driver in Oregon for someone whose regular co-driver broke her collarbone (“Not from rally racing!” she says). From there, Kristin bought the right equipment, got a job at NAPA Auto Parts in Lewiston to learn about calipers and such, and has been co-driving for five years. A few years ago, she met the man for whom she would remain a steady co-driver.

“I met this Polish driver and said, ‘I know who you are!’ and he said, ‘You know how to say my name!’” They were married six months later.

Her husband, Mariej Przybysz (pronounced Mach-ay Pshi-bish, but he answers to Matt) fishes for scallops out of New Bedford. He is also the number one rally driver in the eastern  championships. “We have normal jobs,” says Kristin, who now works for Native Maine, a local food supplier based in Westbrook, and recently started competing as a driver in her own car. “I don’t buy shoes or cute clothes because I buy new tires instead.”

A dedicated bunch, New England Forest Rally spectators made their way to the various stages around western Maine, creating a line of cars

One of the best things about forest rally for fans is the accessibility of the drivers. Racers stand by their cars during 30-minute service breaks, chatting, posing for photos, and signing autographs.

According to many fans and drivers from Maine, like Cassidy, the 1993 national champion and Ogunquit native Carl Merrill drew them to the sport.

“He was a big force in the 90s,” Cassidy says. Today, unsurprisingly, Pastrana and Ken Block from California are the fan favorites. Pastrana and Block cut their teeth snowboarding and skateboarding as amateur riders in the X Games. Rally America joined the X Games in 2006, and Maine native Chris Duplessis was recently invited to participate.

Duplessis grew up in Bethel on a farm called “Pooh’s Corner,” where his parents raised him with his brother and sister alongside real-life Pooh characters including a pig, donkey, rabbit, and baby kangaroo.

“My dad and brother raced go-carts,” Duplessis, age twenty-three, says. “But, you could only race in the summer.” Duplessis became interested in rally, which at the time was a winter event on snow, as soon as it was legal for him to drive. This year’s New England Forest Rally was his first with his new 2010 Scion so he didn’t have high expectations. “I don’t expect to do well,” he says with a smile. “Maybe third? But it feels awesome to be home.” This year, he placed first in his class and fifteenth in the national championships.

For his “day job,” Duplessis teaches others how to race at the Team O’Neil Rally School in New Hampshire. He is often the co-driver for his students, but he prefers to stay behind the wheel. “When you drive, you’re in control. The co-driver has to be good at math, be able to read and write,” he adds with a laugh.

As a newcomer to the rally, you won’t find a better ambassador than Duplessis. He emanates enthusiasm for the sport. He’s engaging, patient with photographers, and comfortable promoting the sport and competing with friends. People praise him constantly and have even started legends about him—including one about how Chris once pulled a man from fiery wreckage during the Climb to the Clouds race on Mt. Washington.

“Chris helps others get into the sport,” his mother Carol raves as a rally car with Georgia plates drives by. Carol waves. “That’s Gary Wiggins. Good kid. Chris taught him how to drive.” This happens frequently throughout the weekend—fans and other drivers mentioning how intertwined everyone’s experience is. When he received his Scion, Duplessis gave his old car to Ed McNelly from Oxford, a former student and friend who was participating as a driver in his first rally that weekend.

According to Mike White, an IT professional from Camden who races a 1984 Saab for his team RallyHo Motorsports, the camaraderie between drivers is unparalleled. White was competing after a seven-year hiatus to raise his daughters. While standing at the meet-and-greet, or “Parc Expose,” at Sunday River the morning of the first race, he was slapped on the back by several other drivers who were happy to see him return to the circuit and even tackled by a former member of his crew. “I’ve been in the IT industry for almost twenty years, but I love racing,” White says with a smile.

White’s car is plastered with local business names—sponsors from his area that proudly support him—while other cars sport logos from national brands, but there is little separation between the amateurs and the pros. “If you break a turbo, you walk to the team next to you and they’ll give it to you,” says Craig Zurhorst, a former journalist and now community relations director for Western Maine Transportation Services who volunteers as a local liaison for Rally America.

Andrew Freeman owns a camp with prime viewing along the sixth stage of the rally, on a dirt road that winds through the wooded areas in Woodstock, Milton, and Concord Pond.

“I was kind of against [the rally] at first,” he says. “I didn’t know what it was and the roads were shut down. I complained. Then I saw my first race and I’ve donated my land for spectators ever since.”

He is referring to a multi-acre area cordoned off with police tape to keep viewers safe. Volunteers patrol the dirt roads, telling people to back up and wrangling with the occasional unruly drunk. Driving out to the area, spectators stand by the road as if they are waiting for a parade. In some spots, the air reeks of tobacco and beer; in others, grilled hot dogs and burgers. People hoot and holler at every car, whether it’s racing or not.

On Freeman’s land, the spectators are mostly families and some older folks sitting in camp chairs or on the beds of pickup trucks. “When the race starts, stand up,” Zurhurst says with the authority of someone who has been to many of these events. “If something goes wrong, you want to be able to jump out of the way…quick.”

When it is announced that the race will be delayed, fans speculate that perhaps some of the drivers had trouble at the last stage and need to be hauled from ditches or dragged out of the mud. Some lamented the fact they didn’t pack enough beer, while those beside them worried about how intoxicated their counterparts might become.

Once the race begins, cars whizz by with more or less a minute between them. One driver lurches toward a ditch but pulls the car around in time and skids off. “I’ve been waiting for someone to go into that brook,” someone shouts from the crowd. Another leaned over and whispers, “People love to see the mistakes.”

“We control what we can,” Cassidy says. “There’s a lot we can’t control. If we crash, we crash. I heard a country song on my way here and the lyric was ‘Live like you’re dying.’ I think that’s about right.” Then he adds, “On the street, I drive like an old lady.”