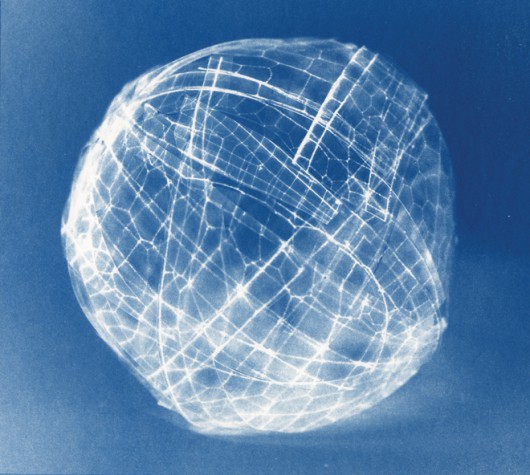 Anna Hepler’s prints are mesmerizing, transparent constructions: imaginary molecules or webs of affection. They breathe volume. Hepler explores the cohesiveness of pattern, how things hold together, and how patterns change when they are translated between two and three dimensions. “I make something solid to achieve something flat, and vice versa,” she says. Sometimes she works on paper; other images she suspends in Plexiglas.

They are maps of connection. Hepler’s work embraces space and delineates the atmosphere. These are diagrams of spirit, making palpable what cannot be seen.

Hepler scanned dragonfly and damselfly wings onto transparent material, from which she built tiny spheres. Dissatisfied with
their size, she photographed the objects, detaching them from three dimensions and the realities of scale.

This print is a cyanotype—a blueprint. Paper brushed with a chemical solution turns
blue where it is exposed to ultraviolet light. Where the wings’ veins block the light, the paper remains white. The image glows like a celestial body; it seems a glimpse of a fragile, imagined, disintegrating object whose threads of latitude and longitude barely cohere. Joints, like synapses, burn with the energy of connection.

The image projects not only three dimensions, but also a fourth dimension: time. We are witnessing a moment in a continuum, watching the forces of change. And the work itself is subject to change.

This summer, the Portland Museum of Art will mount an installation of Hepler’s “Inflatables,” clear plastic taped together and blown up like balloons. The tape lines become a shifting lattice, whose weighty scale and raw manufacture contrast with the ethereal precision of the two-dimensional cyanotypes.

The “Inflatables” breathe. The volume of air expands and contracts and leaks. And when exposed to light, the blue of the cyanotype fades. This is art, not life. Pumping in more air will revive the balloons, and the blue regains its intensity in darkness.