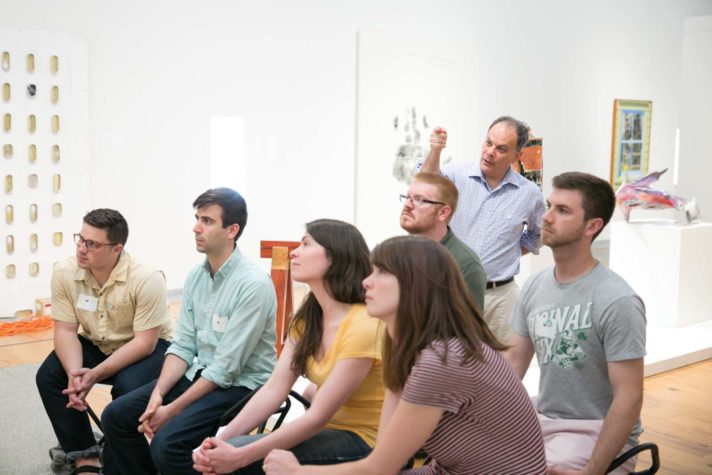 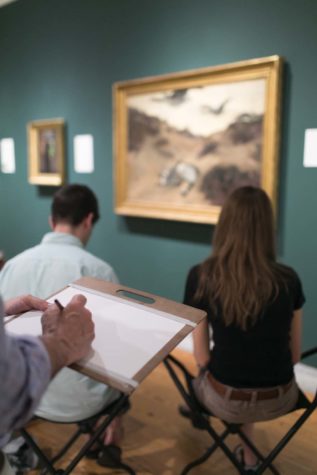 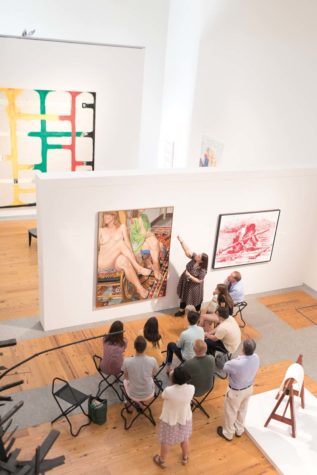 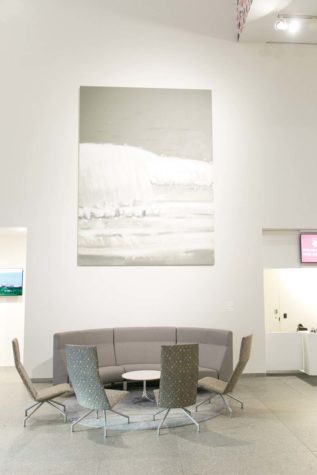 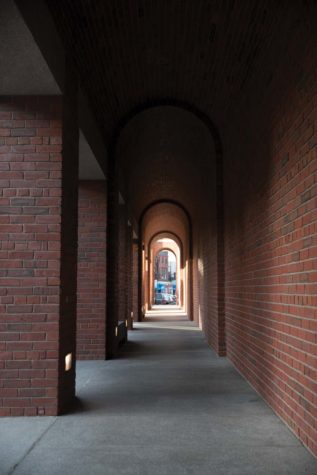 The PMA was founded in 1882 as the Portland Society of Art.

Medicine at the Museum

Learning observation and thinking skills by talking about art.

Two lifeless geese lie on a jagged dune between sparse tufts of vegetation. Three of their brethren have taken to the sepia-toned skies above. Is it possible that a hunter is poised just beyond our view? Is there a deeper meaning to this work? When American artist Winslow Homer finished Wild Geese in Flight in 1897, he could not have known that his oil painting (now located at the Portland Museum of Art— just 12 miles away from his former studio on Prouts Neck) would become a topic of conversation for future physicians. For the past two years, students from the Tufts University School of Medicine Maine Track Program and health care providers from Maine Medical Center in Portland have been learning about observation, collaboration, and thinking skills through examination of pieces like Homer’s painting of wild geese, using an approach called Visual Thinking Strategies.

Jennifer DePrizio, the Peggy L. Osher director of learning and interpretation at the museum, says that the method helps people develop empathy and respect for others’ points of view. “Art is a way for us to talk about the most important things about being human,” says DePrizio, who has worked in museums for 18 years. Previously the director of visitor learning at the Isabella Stewart Gardner Museum in Boston, DePrizio has been with the Portland Museum of Art since 2014. “Our museum is really interested in how we can use the resources we have to better the community,” says DePrizio. “Art museums are traditionally tailored to people who already know about art. To make museums more accessible, we need to reach out to people who may not feel comfortable there.”

Cognitive psychologist Abigail Housen and Philip Yenawine, a former educator at the Museum of Modern Art in New York City, developed the concept of Visual Thinking Strategies in the early 1990s. “They were trying to figure out what happens when people look at works of art,” says DePrizio. “Visual Thinking Strategies is an open- ended, learner-centered way of learning how to look and talk about art, and decipher what you’re looking at.” DePrizio has offered this experience to several Portland-based health care groups, including surgical residents and heart catheterization laboratory staff at Maine Medical Center. “When I begin the conversation I say, ‘Everything is possible,’” says DePrizio. “‘Bring in anything you want to add.’”

The learning strategy focuses on three questions, beginning with, “What’s going on in this picture?” In the case of Wild Geese in Flight, the hunter hypothesis is a popular one. But perhaps there are other possibilities—the first owner of the piece told the Portland Museum of Art that the title was At the Foot of the Lighthouse. If that is true, perhaps the lighthouse played a part in the death of the geese? Or maybe there are other possibilities. Whenever anyone offers an interpretation, DePrizio asks, “What do you see that makes you say that?”

“It takes a while to develop an idea and be brave enough to raise your hand,” says DePrizio. “Then someone will have a different idea. That’s when it opens up and becomes this really rich conversation.” DePrizio prompts people to go deeper with a third question: “What more can we find?”

A 2001 study done by researchers Jeffrey and Lisa Smith at New York’s Metropolitan Museum of Art found that museum visitors spent a median time of 17 seconds looking at one piece of art. Using Visual Thinking Strategies, DePrizio says that groups typically spend 25 minutes in conversation. Some discussions have gone on for as long as 45 minutes. “This is really incredible in terms of sustained looking and thinking about works of art,” she says.

Sustained focus is important for people in the health care field. “Medical education really homes in on critical thinking skills and interpretations based in evidence,” says DePrizio. “You can’t just say, ‘Because I think so.’ There has to be something, whether or not you can always articulate it.” DePrizio has worked with Dr. Stephen Hayes, an internal medicine physician at Maine Medical Partners in Westbrook, and Dr. Jo Linder, the director of student affairs in Maine Medical Center’s Department of Medical Education, to introduce these concepts to second-year students in the Maine Track Program. The collaboration between Tufts University School of Medicine in Boston and Maine Medical Center gives admission preference to qualified Maine residents and individuals interested in rural health care with the hope that they will return to their home state to practice medicine.

“Going to the museum helps us to be open to looking at something that we do not see on a regular basis,” says Hayes, who has been in the medical field for 30 years. “It really helps people with observation and building a language around what they’re looking at.” Hayes has also been involved with the Maine Humanities Council’s Literature and Medicine program. “As you study something and think about it and look at it from different angles or collaborate with someone else, different aspects of it become more important,” he says.

Hayes says that one of the most valuable aspects of his Portland Museum of Art experience is that it has helped him understand the way that he processes information. “Patients would want you to do that. They’d want you to be reflective and look at things critically. Decisions are not always black and white.” In his 2011 book Thinking, Fast and Slow, Nobel Prize winner Daniel Kahneman described “System 1” thinking as fast, instinctive, and emotional and “System 2” as slower, more deliberative, and more logical. Hayes says that health care providers are called upon to exercise both types of thinking. “There are situations where you can make a judgment relatively quickly, and it’s correct, and you deal with it,” says Hayes. “But there are other situations where you have to keep going back and testing your thinking against what’s going on and making sure that you’ve got the right information to make a decision.”

Hayes also likes the collaborative nature of looking at art together. “As a group you might have more ability to think about something differently,” says Hayes. “People with different talents, or different ability levels, can actually cooperate or create something in that kind of an encounter.” Hayes points out that most patients—especially those who have complex problems—will be interviewed by multiple providers, including front-office staff, medical assistants, nurses, primary care providers, and consultants. “We’re asking different observers to look at the same information, get different angles on the information, and to use that to interpret,” says Hayes.

Hayes and DePrizio believe that programs like Visual Thinking Strategies will help the Portland Museum of Art with its goal of benefitting the community as a whole. “For anyone, no matter what your job is, no matter what you do when you’re not in a museum building, art can give you a better sense of what it means to be a human being,” says DePrizio. “That naturally enriches the experience that we can have with one another every day.” 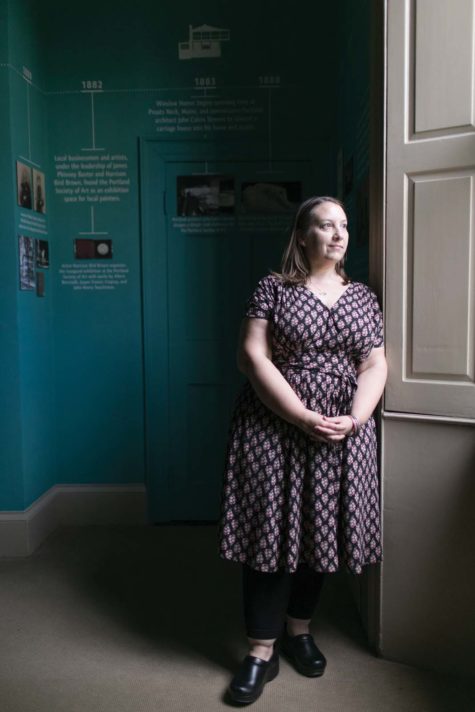 DePrizio at the Portland Museum of Art’s historic McLellan House. 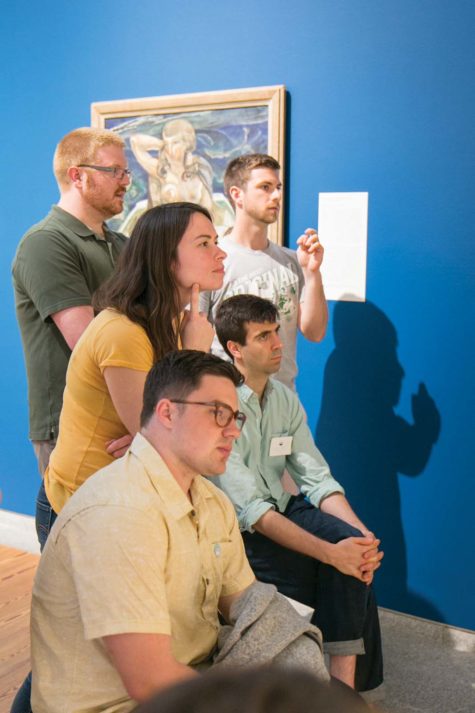 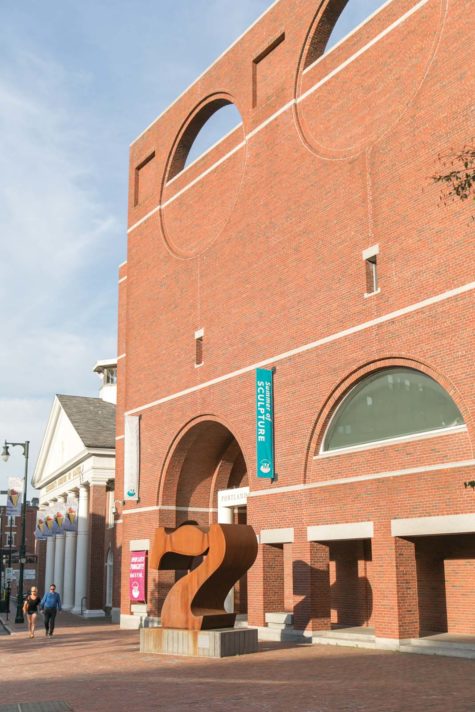