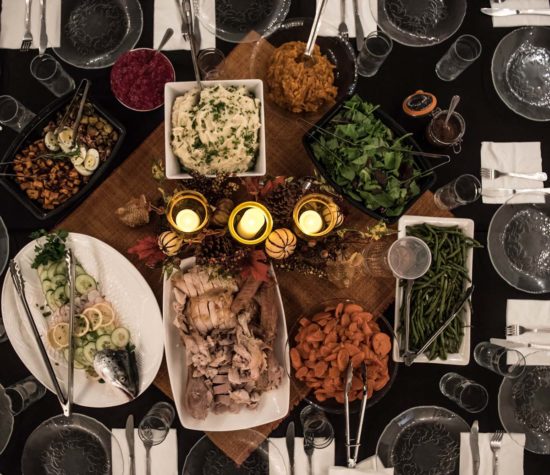 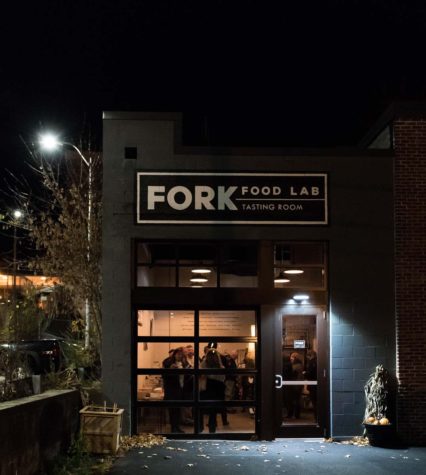 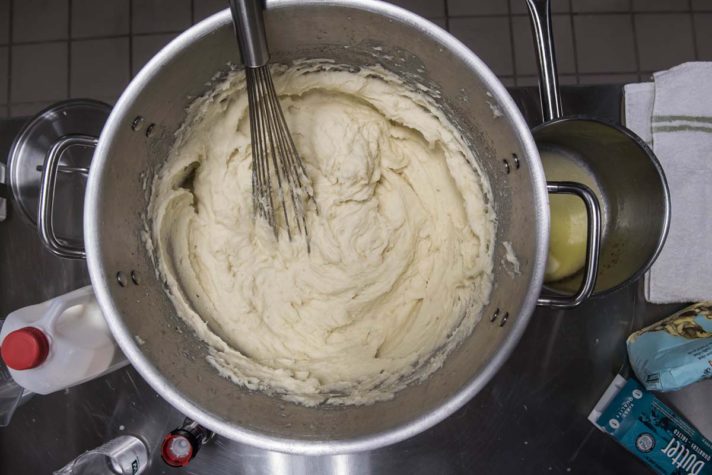 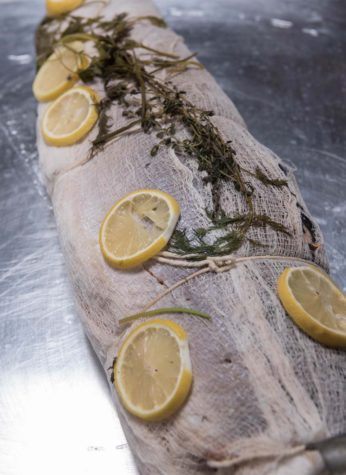 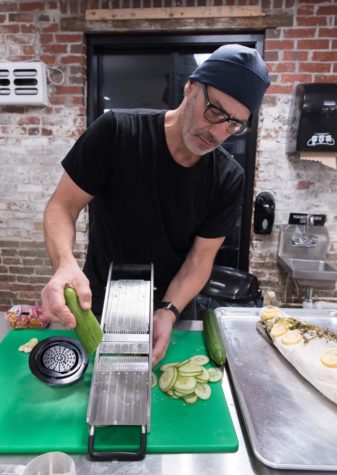 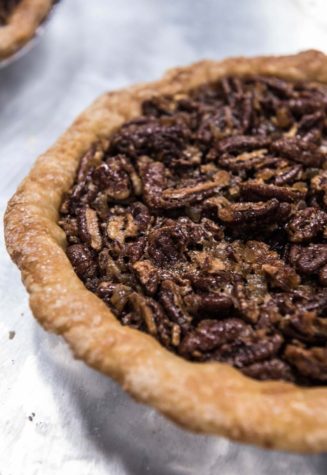 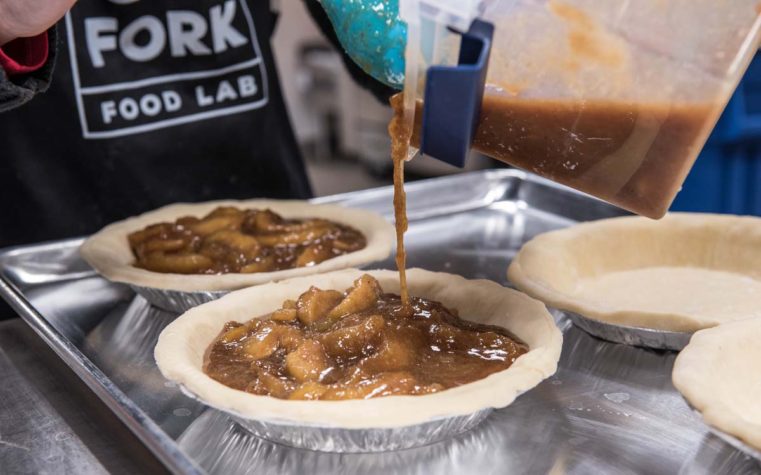 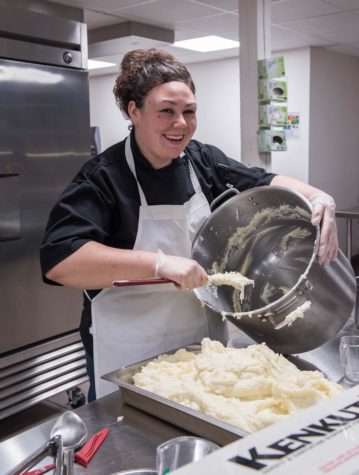 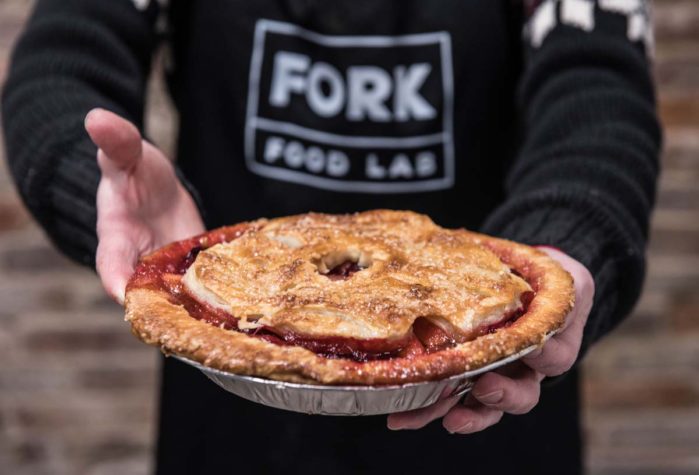 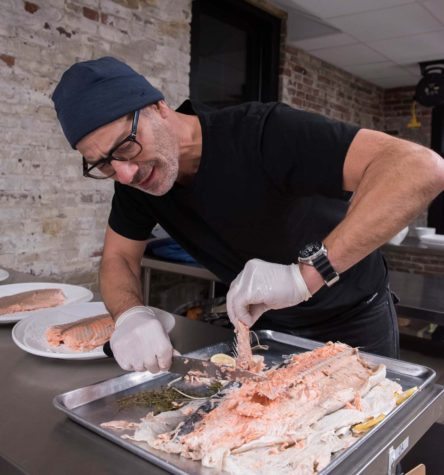 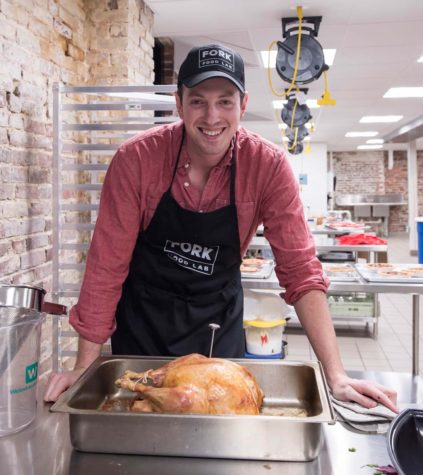 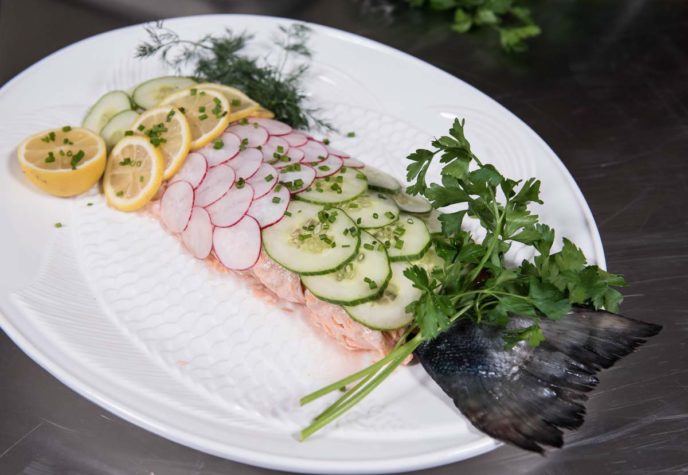 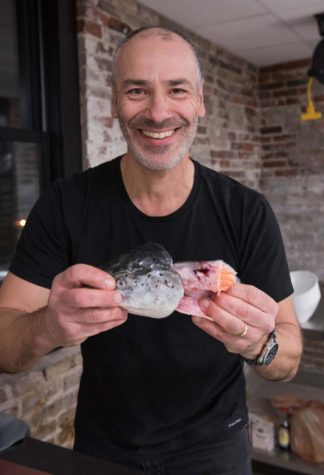 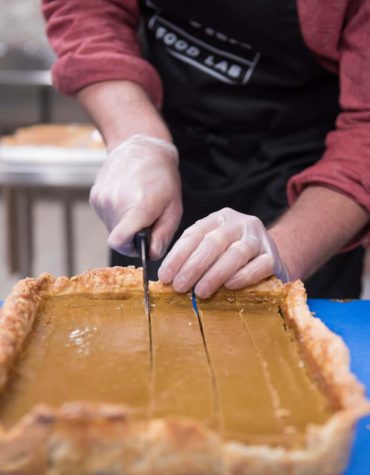 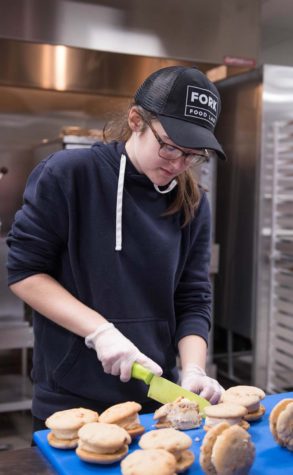 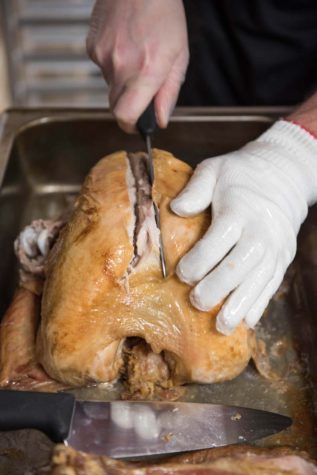 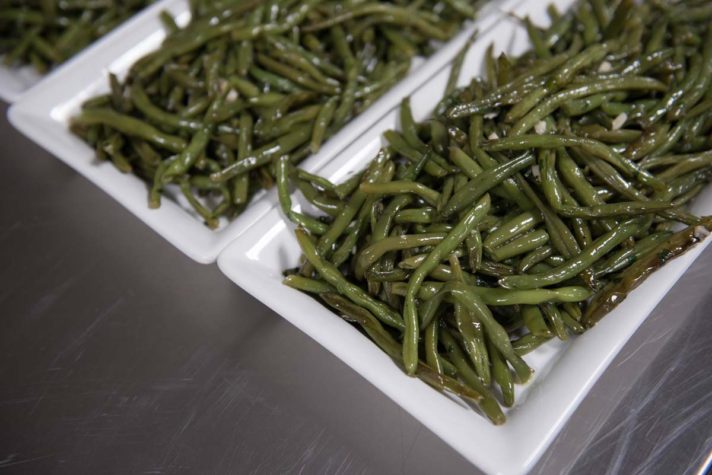 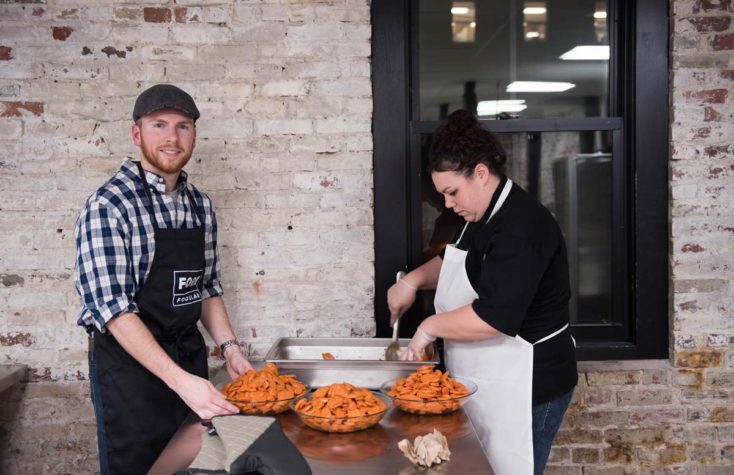 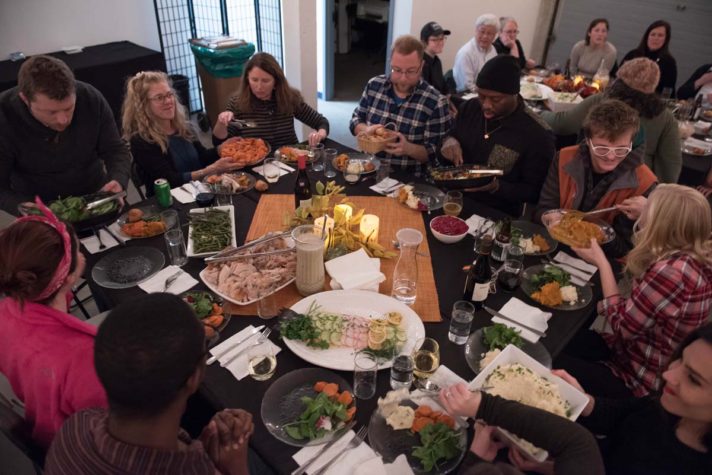 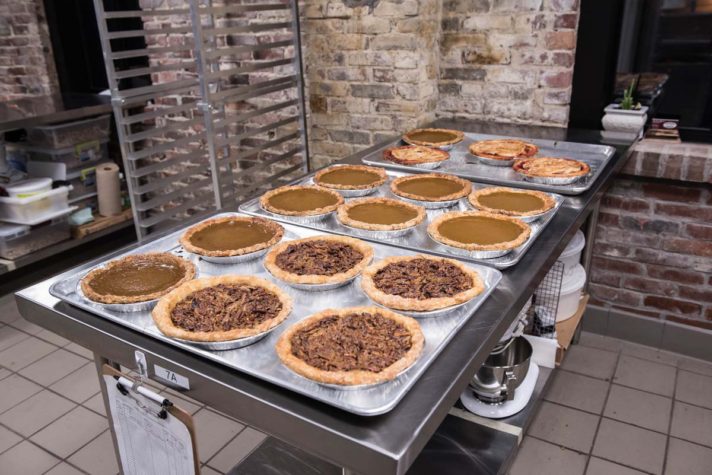 In Fork Food Lab’s shiny new kitchen, there’s the unmistakable, mouthwatering smell of Thanksgiving. Turkeys are roasting, gravy is simmering, and pies are baking. Chef Edward Bondellio of French Picnic Catering is garnishing poached salmon with cucumbers and radishes. On the other side of the kitchen, Renee Dolley of Renee by the Bay is working on pies, including a gingered apple cranberry pie that looks absolutely delicious. New convection ovens and cook tops line the interior, and there are numerous prep tables pushed up against the exposed brick walls. Fork Food Lab partner Eric Holstein is mashing potatoes, a large pan of melted butter by his side. It’s much less frenetic than my kitchen an hour before serving time, even though cooks are readying dinner for almost 40 people. Holstein has hosted a Friendsgiving dinner of his own for the past seven years, but this is the first time he’s done one for the public and the first dinner that Fork Food Lab has hosted in its space in West Bayside.

Fork Food Lab, opened just last September, is the brainchild of Holstein and partner Neil Spillane, former CEO of Urban Farm Fermentory. Holstein brings many years of restaurant consulting experience, as well as hands-on experience from when he and college friend Madison Gouzie created pop-up hot chocolate and s’mores bars in New York City. Those “Winter Warmer” pop-ups became the basis for the Marshmallow Cart, one of the first members of the Fork Food Lab. Members are food makers and people with ideas for food products, who need a place to make it happen. “There are few networks for food producers,” says Holstein. “Our goal is to help create a community built around food.” The vendors have their own commercial licenses and use Fork Food Lab as their approved kitchen. At the moment, there are 23 members sharing the communal kitchen. Spillane says with the shared kitchen, members can ask each other questions and work together to buy in supplies in bulk. “We take over as many of the tasks as possible, so members can do what they do best,” he says. “We give food entrepreneurs all the tools they need to be successful.” It’s not just the makers that benefit from the Fork Food Lab community; buyers do too. The space provides a centralized location where retailers and consumers can find, taste, and purchase products. The Tasting room is open to the public on weekends, with cold brew coffee from White Cap Coffee on tap and a rotating roster of members’ products, such as baked treats from Fat Pants Bakery and Cape Whoopies.

Friendsgiving guests gathering in the tasting room, sip on wine, cider, and Rising Tide Brewing Company Zephyr Pale Ale and snack on Plucked Fresh Salsa and chips. Some are neighbors, like Tim Burns and Mary Jameson, who moved to West Bayside from Cape Elizabeth and “make the rounds of any food events.” Other guests are friends and colleagues of Holstein and Spillane. I caught up with Peter Nielsen who heads St. Joseph College’s Institute for Local Food Systems, a new program. He is at the event with his daughter Izabel, who spent the last several months working at Turner Farm on North Haven. As we take seats at the table, I meet Mary Turner of the Midcoast Hunger Prevention Program, who had volunteered at the Feeding the 5000 event in October. “That event was all prepped here at Fork Food Lab,” she tells me, “using food that was gleaned from local farms.” Carl Hanson takes a seat next to me. As we pass platters and bowls family-style, he explains why he was Fork Food Lab’s very first investor. “Eric and Neil are incredibly smart individuals, and they know what they’re doing. They have all the right backgrounds,” Hanson says, as he helps us both to glazed carrots and green beans. We fill our plates with turkey and salmon, roasted Brussels sprouts and potatoes, and rolls from the lab’s newest member, Chalkboard Baking. Before dessert is served, Spillane leads a tour of the facility. “We’re working to transform the local food system,” he explains, “with community at the heart of it. It’s the opposite of globalization.”

Fork Food Lab has plans to host many more events. There will be a winter market for tasting and gift buying on December 17 and cooking classes and family-oriented events. Gelato Fiasco, which has a dedicated open kitchen at the site, is offering gelato-making classes. Local chefs, and anyone else interested, are invited to use the space for pop-ups of their own. Holstein and Spillane have opened up new options for the local food community with an exciting, dynamic idea. And I even got to take home leftovers. 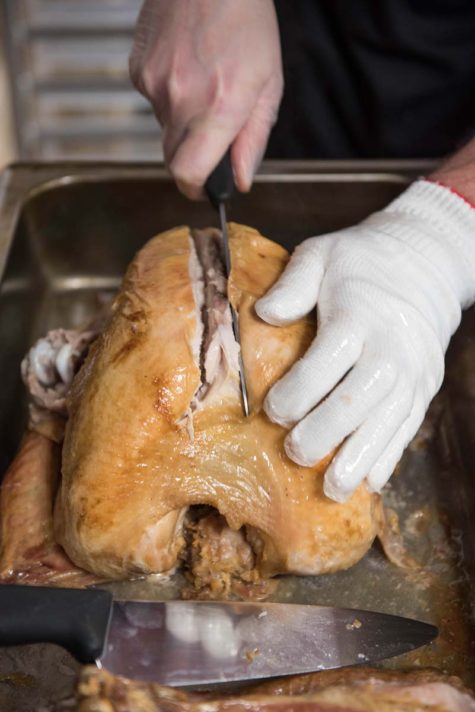 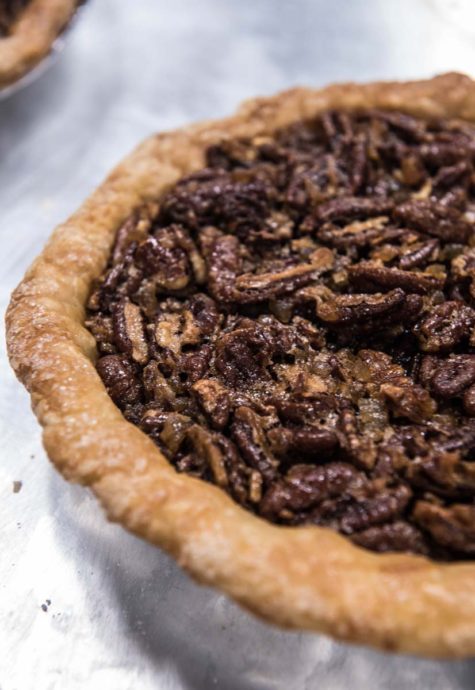