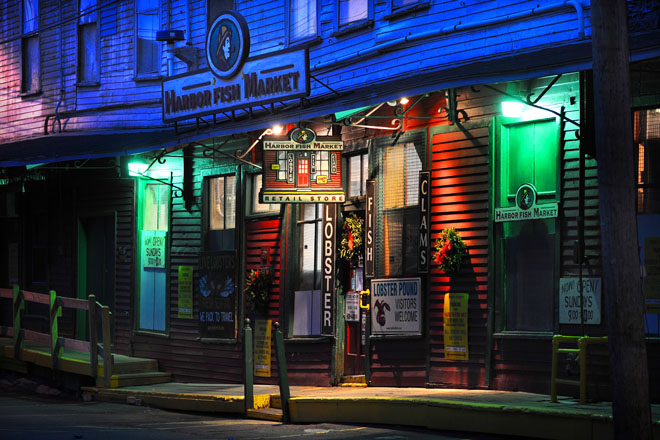 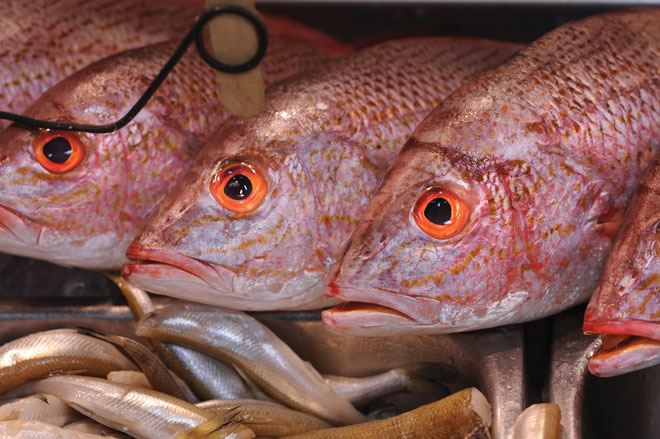 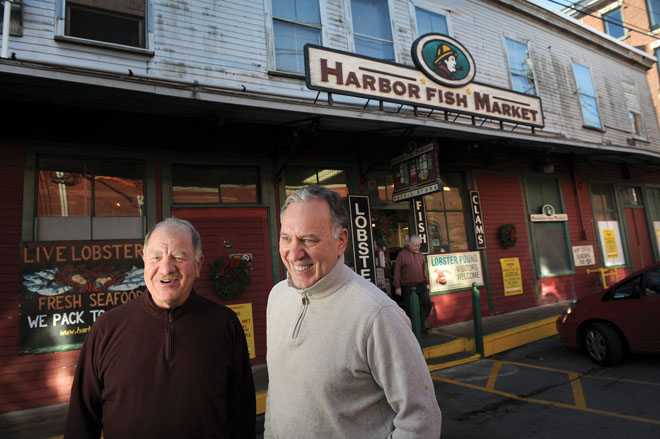 Nick and Mike Alfiero are proud of the family’s long heritage at the Harbor Fish Market. 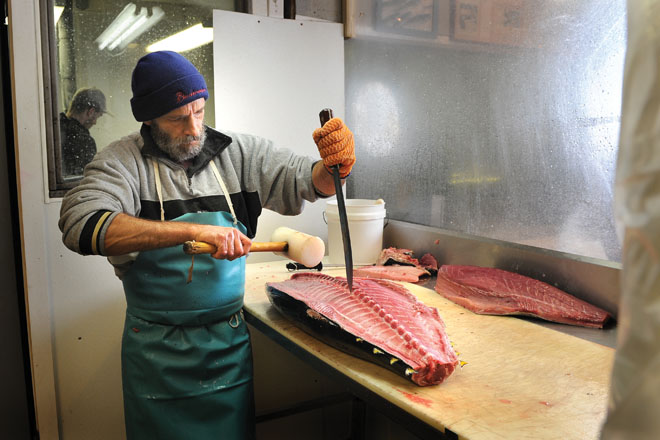 Ronald Brown of Portland debones a tuna shortly after dawn at Harbor Fish, where he has worked for 32 years. 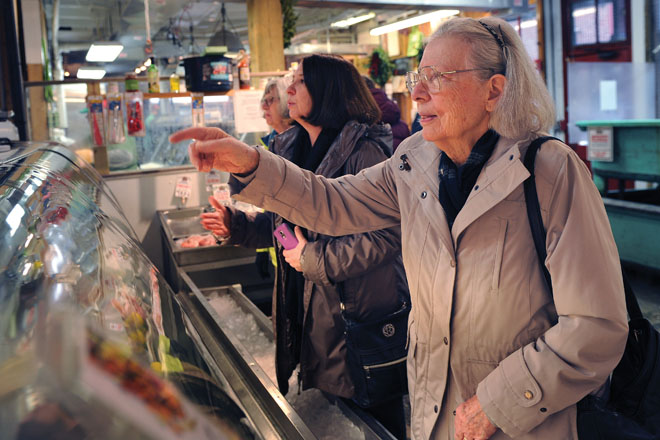 Barbara Lavopa, 82, of Scarborough has been coming to the market for about 40 years, beside her is Linda Crooker of Ann Arbor, Michigan. 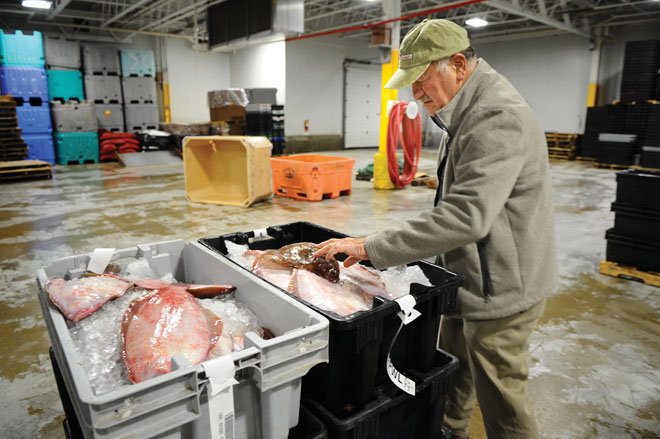 Nick Alfiero, one of the owners of Harbor Fish Market, inspects the day’s fresh catch of flounders at the Portland Fish Exchange.

A Portland institution since 1969 built on honest business, family values, and a love for good seafood

The Harbor Fish Market is in many ways the anchor institution of Portland’s three-mile-long working waterfront. There are a dozen or so wharves fingering out into Portland Harbor, but Custom House Wharf is one of the few where the public is welcome to wander and soak up the salty atmosphere. Custom House Wharf is also where the Harbor Fish Market has been located ever since Ben Alfiero, Sr., left his job at Pine Tree Paper in 1966 and bought into his brother John’s fish business “for half of nothing,” according to Nick Alfiero, Ben’s oldest son, now one of the owners with his younger brother, Mike.

Mornings are normally a busy time at the Harbor Fish Market. Although the retail part of the market does not open until 8:30 a.m., many of Harbor Fish Market’s 43 employees arrive by 6:30 a.m. to sort, cut, and display fish. The market’s customers run the gamut from the city’s top chefs to connoisseurs and people like you and me. Throughout the morning, you can watch some of the market’s most skilled employees in the refrigerated room filleting species both common and exotic. Photographer Fred Field and I watch through a big window as Ronald Brown and Nancy Brown carefully fillet the day’s fare. Ronald has been an employee at Harbor Fish for 32 years and Nancy for 25 years. “We have a lot of long-term employees,” says Mike Alfiero, who met us shortly after we entered the market. “Half of our employees have been here between 10 and 15 years. In the old days at a fish company you didn’t get a vacation or a day off. You didn’t get benefits. We feel like we brought that into the business.”

If there is a hiatus in the frenetic pace of work at Harbor Fish, it occurs in the early afternoon after a morning of buying, cutting, and displaying, and before the late afternoon rush of customers shopping for fresh seafood on their way home. We sit down with Nick and Mike in the cramped conference room down a back corridor as they describe the deep family roots and values that still drive Harbor Fish Market’s business.

Ben Alfiero, Sr., was an instinctive businessman. He had grown up in the India Street neighborhood of Portland known as Little Italy. “It was a tough neighborhood,” Mike explains. “My dad’s philosophy was no matter what you do, you do it well—whether it’s sweeping up fish guts, or whatever. My dad also had a great business sense. He loved wheeling and dealing. He was great at not wasting anything. He could use the trimmings off of fish and create something to sell, life fish stir fry.”

Another family value that has guided all business at Harbor Fish, in Nick’s words, is, “we would never sell anything we wouldn’t take home to our families. Quality comes first and the price is the price.” As Nick sums it up, “It’s not the bottom line you pay attention to. The bottom line will come if you do everything else right.”

But perhaps the most important value in Harbor Fish Market’s business model is
the centrality—the sacredness, actually—of maintaining family bonds, which perhaps also stems from the owners’ Italian heritage. Nick adds, “We care about each other as brothers. We didn’t jump on each other if there was a mistake; we have always been forgiving of each other.” And Mike adds, “Harbor Fish is as much a part of our sisters’, in-laws’, and mom’s lives as ours.” With that he hands me a copy of a newly published book, Harbor Fish Market, which is filled with family recipes, co-authored by Nick’s wife, Kathleen, and his son, Rian. It was dictated by Nick, who stood at a stove and reconstructed his approach to cooking, which had previously been instinctual, mostly involving a pinch of this and a splash of that.

Another attribute that stems from the family’s Italian heritage is that the Harbor Fish Market has always sold fish and shellfish that were considered exotic in Maine, but are common in Mediterranean cooking. “Restaurants were not used to species we brought in, like squid and tuna and mussels, none of which originally had a local following,” says Mike. “We were introducing them before they became trendy. Portland has become a foodie town, partly because of us,” he adds proudly, as he lists the top restaurants in Portland that buy seafood from the Harbor Fish Market.

The foodiness of the market is clear from the moment you step inside the red storefront. On display near the door is a pile of shimmering green eels, and close by are turbot from Spain.

Although Nick worked at Harbor Fish during college, he left Maine after graduating and worked for Lever Brothers, the international food company, from 1971 to 1975. “I was in a gray suit with a briefcase,” he recalls. “It was a Park Avenue corporate-type job, but I moved my family four times in those five years.” When the company asked him to move again to Detroit, “My wife said to me, ‘This is no life.’” The next thing that Nick recalls was “Dad said, ‘I’m starting to do really well,’ so I moved back for one-fifth the pay.”

The Harbor Fish Market was 25 feet wide at the time and 40 feet deep front to back. Two lobster tanks bubbled near the entrance and an ice machine was on the second story. “All of us did everything—we stunned fish, we cut fish, we met boats at midnight, we banged the ice off the wharf, and we served customers.” Nick adds with a mixture of pride and determination, “We haven’t had a backward step since I moved back; we’ve seen steady growth.”

As a kid, Mike remembers, he would come down to the wharf on his bike and catch eels by putting a line down through the wharf’s drainpipes. Mike eventually wound up at architectural school, which taught him different approaches to problem solving. He brought that training and design sense to the business. “I was looking at the logo one day. The old logo was just the Gloucester fisherman, and I got to thinking about the red storefront with the black trim.” To him, the storefront reminded him of the signature identity of such structures as red barns and red marine storage buildings he had seen throughout his life. He suddenly realized that “the front of our store is our identity.” After a few drafts, the family trademarked the logo and storefront 15 years ago.

Throughout their working life together, the brothers divided up different areas of responsibility. Ben, Jr., who died this past November after a long illness, took care of administrative things. Mike handles the buying of most of the store’s shellfish and specialty fish. And Nick is the leader.

As we walk through the retail section, Mike points to stacks of crabmeat cups, and mentions that the market sells between 500 and 800 cups per week. We also pass by baskets of sea urchins, containers of seaweed salad from a farm out in Casco Bay, fresh scallops just harvested from Cobscook Bay, mahogany clams from Jonesport, smelt from Maine’s rivers, and seven varieties of local oysters, including Pemaquid, Glidden Point, Dodge Cove, and Johns River. “Everyone has their favorite flavor, like wines,” says Mike.

“We try to list where everything comes from,” Mike says, pointing out the carefully marked labels on each item displayed. Mike emphasizes that Harbor Fish Market’s suppliers are essential to their business. “A lot is done on a handshake,” he says, with dealers spread out across the Maine coast, Boston, New York, Virginia, and elsewhere. “A supplier may be stuck with 300 pounds of gray sole one day,” says Mike, “and you buy it even though you don’t need it, because when you really need some and it’s in short supply, he’ll remember you.”

While Mike handles the Harbor Fish Market’s shellfish and specialty fish suppliers, Nick buys the market’s extensive varieties of fresh groundfish. Hoping to benefit from his keen and knowledgeable eye, we accompany him to the Portland Fish Exchange, where boats offload their catch to sell at a display auction. Walking with Nick through the large refrigerated space on the display auction floor a half hour before the auction will begin, we watch Nick inspect totes of scallops, monkfish, cod, and dab.

Nick jabs a finger into a pile of large dabs, a species of flounder, and then holds one up. “You want the flesh to be firm and you want the fish to bend, so you can see it’s not in rigor.” He also inspects the eyes, which need to be clear, not cloudy, and looks at any blood, which should be red, not brown. Nick also knows the individual boats the catch comes from and their captains. He observes that the captain of the boat that is selling the dabs usually lands in Massachusetts, but is back in Portland for Christmas. He pauses at a large tub of freshly shucked scallops that are on display and pops one into his mouth raw. “That’s how you really know,” he says. “I have been eating them raw for 50 years with just a little lemon squeezed over them. They should taste sweet and buttery.”

Nick bids on the large dabs and one of the lots of scallops. When we return to Custom House Wharf, Mike greets us at the door and underscores another reason for the company’s success: “Maine is the perfect place for being in the fish business—there is no better place to be because the Maine brand is so strong.” He mentions how customers all over know about Maine lobsters and points to the phenomenal success of Luke’s Lobster, the chain of lobster shacks started by Luke Holden that has quickly expanded to cities along the East Coast.

Mike also adds a few parting comments about what has made the Harbor Fish Market. “We grew up in this business, but we also grew up in this town. We look our customers in the face every day.” And then Mike concludes, “It’s not a career—it’s a way of life.”

Oh, and about that moment of truth 35 years ago with that young woman in front of Harbor Fish Market. We were engaged within three months, married within six months, and over the following years produced four wonderful sons. As my mother used to say, “If there is any doubt, there’s no doubt.” And with fish, like marriage, there should never be any doubt. 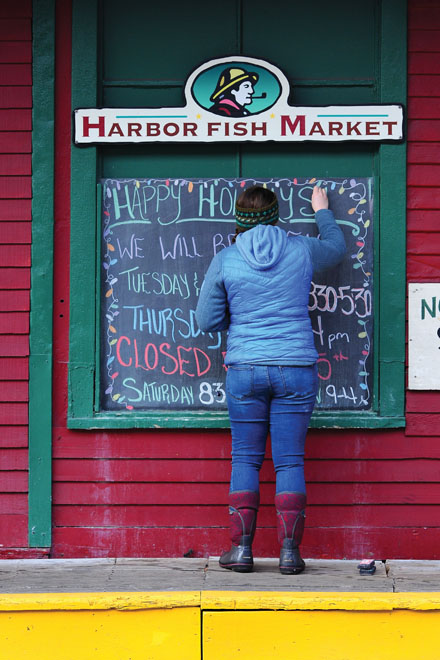 Kathryn Johndrow of Portland updates the chalkboard before the market opens for business. 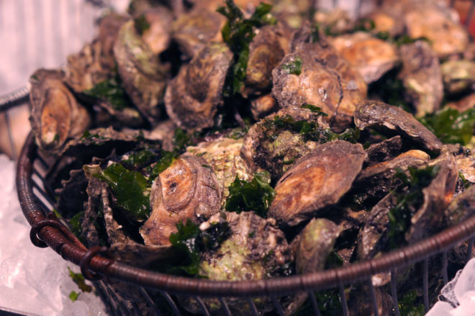 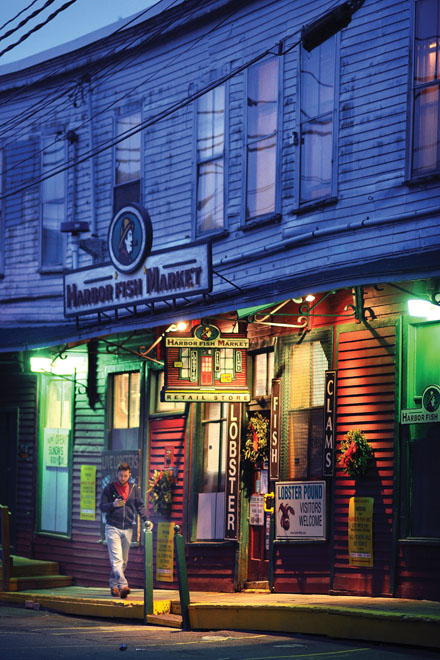 In the early morning light, Connor Vincent of South Portland arrives for work. 20160109 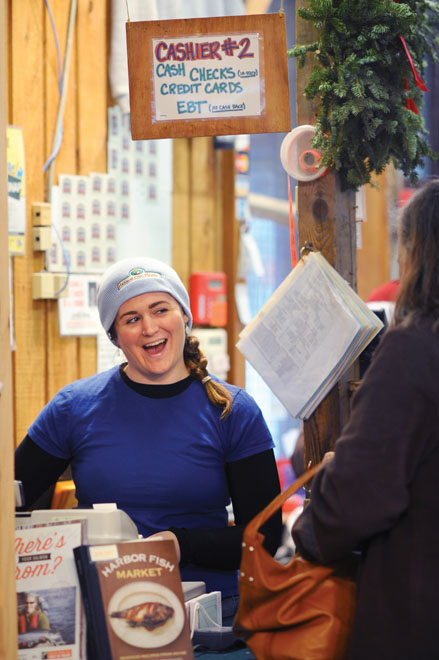 Liz Johndrow of Portland, a cashier, is part of the market’s focus on strong customer service. 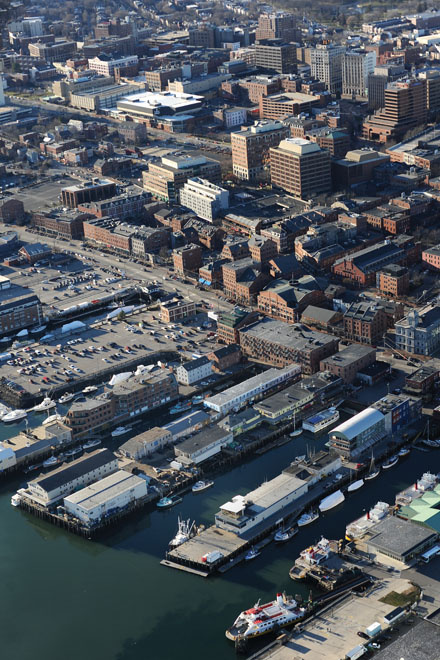 Custom House Wharf helps anchor Portland’s working waterfront. (Harbor Fish Market is in the long gray building on the second wharf to the right of the large parking lot.)