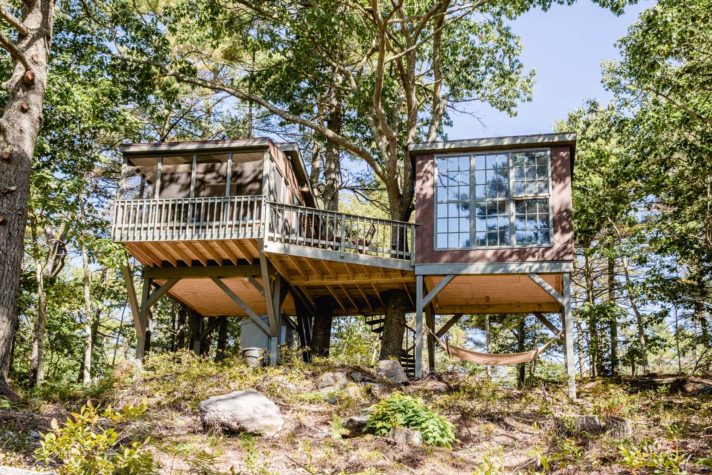 The tree dwellings were designed by Marsha Dunn and constructed by Loren Francis. They sit on a long slope of woodland overlooking the Back River in Georgetown. 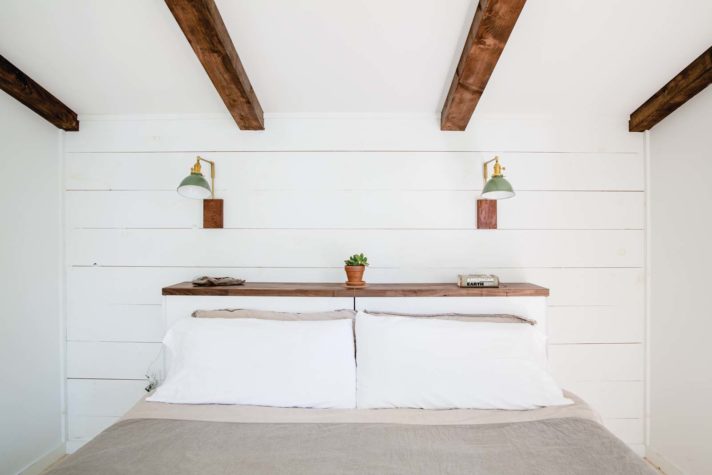 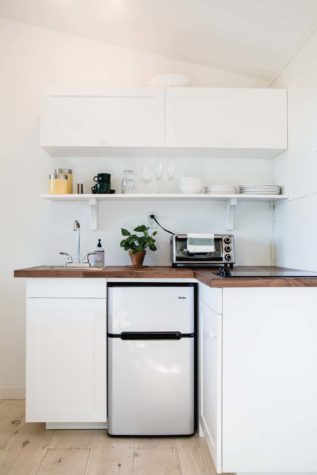 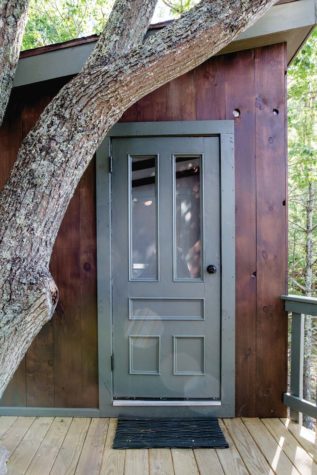 The tree houses are constructed on ground level in the Francis family workshop, then lifted into the trees and installed. 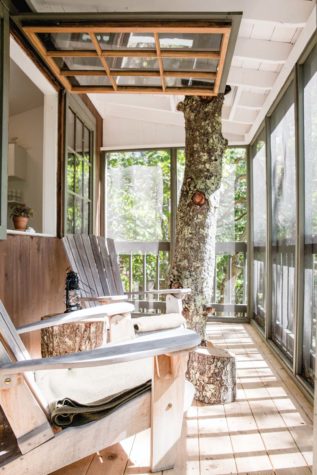 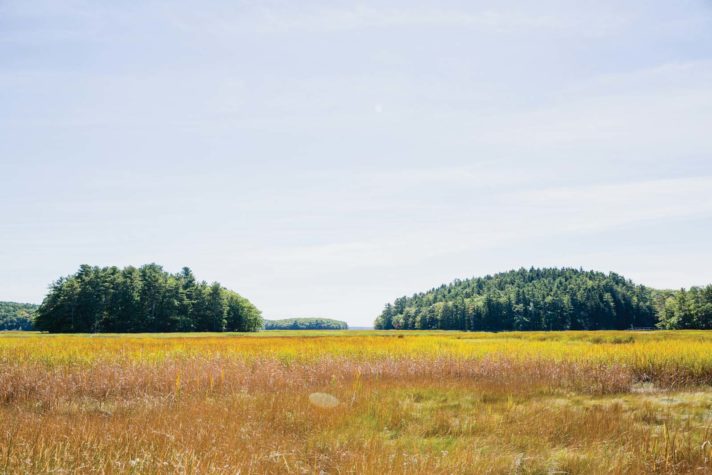 Midcoast Maine in the summer is a glorious sight. The Francis family has lived in Georgetown since the 1970s, farming on a nearby peninsula. 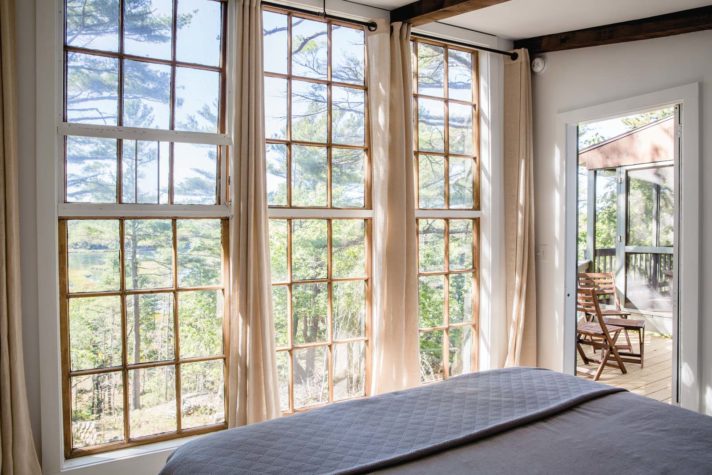 Marsha designed the floor plan of the tree dwellings. In the initial sketches, the windows were going to hinge outward from the sides, but in the final product, they have overhead hinges, which make for a better view. 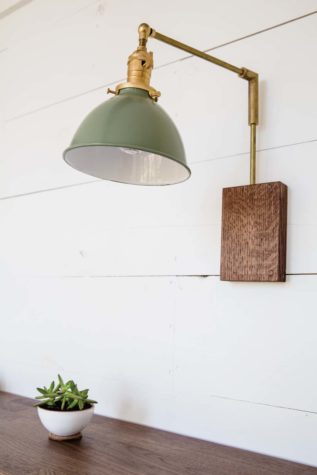 The decor inside is woodsy and natural, and even includes a few small potted plants. 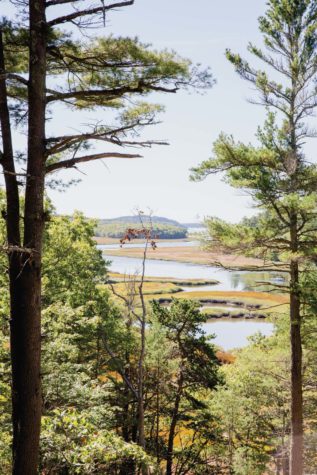 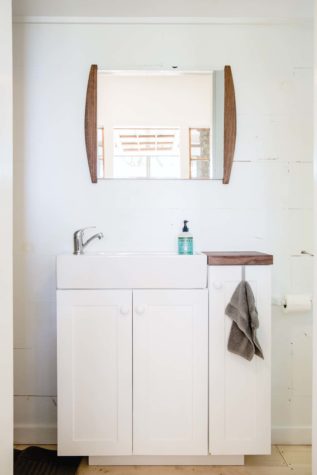 Perched high within the trees on the coast of Georgetown, three clever little homes are providing ample inspiration to Maine travelers.

What is so appealing about sleeping in a tree house? It’s a question I return to time and again as I explore three tree dwellings that have been erected on the coast of Georgetown, a series of little woodland homes perched high in the pines. Their size makes them cute, and that’s certainly appealing. They are also rather whimsical— and well designed, with Scandinavian- inspired interiors and cleverly laid-out floor plans. But it’s more than that, says builder and co-owner Loren Francis. He’s covered in sawdust and his long wild hair is pulled back in a bun. He balances his baby daughter, Pippy, on his hip as he talks, sometimes lifting her over his head playfully. “Tree houses make you feel like a kid again,” he says. “They take you back.”

There’s also something to be said for the view. I’m sipping coffee on an unstained Adirondack chair that has weathered to a light dusty gray, looking out through reclaimed windows down a long wooded slope to marshlands divided by the sinuous curve of the Back River. I don’t usually observe the world from this viewpoint—it’s the perspective of a squirrel or a chipmunk, high above eye level, but not as high as a plane or a bird. “When you’re in the trees and you feel the breeze coming in, you feel as though you’re part of nature in a different way. There aren’t any boundaries between you and the trees, there’s a continuous flow between inside and outside,” says Marsha Dunn, who, along with her husband, Philip Francis (brother to Loren), and Ida Lennestål (Loren’s partner) comprise the four-person team behind Seguin Tree Dwellings. “There’s a tranquility to the view up there,” she adds.

This view inspired the project, explain Loren and Ida, who currently live in a vintage camper that they bought and renovated and parked on his parents’ nearby property. (Vintage campers are another obsession of Loren’s—he’s bought five of them in the past few years.) “My family has been here since the 1970s—they were part of the back-to- the-land generation,” explains Loren. As kids, both Philip and Loren often looked across the water from their parents’ 55-acre property in Georgetown, wondering about this forested hill, this wild piece of land. When it went on the market in 2015, Loren decided to explore it in earnest, taking long walks through the woods. One day, as he stood on the crest of the hill, he realized that there was something missing from the real estate listing. “He saw there was this possibility for incredible views,” Marsha remembers. “He said to me and Philip, ‘Let’s do something with it. Let’s get the land.’”

They closed on the property on Leap Year Day, February 29, 2016. From that day, the foursome has been caught up in a whirlwind of work, constructing the three dwellings (a job overseen by Loren), managing bookings and sales (Philip handles this end of the business), and figuring out the aesthetics of their unconventional project (Marsha is master of this domain). Ida helps out with anything else that might crop up, from driving into town to purchase tools to painting rooms, photographing the houses, building the website, and other tasks big and small—all performed with a baby strapped to her back. Much of the construction took place in the Francis family boathouse, where they build, paint, and finish the tiny houses before moving them to the site and placing them into the trees with a crane.

“We had a bit of a tight fit on our first one,” Loren says as he opens the door to the bedroom. The door just barely clears the trunk of the massive oak tree, which rises up from a hole cut into the deck. “We figured out our measurements a bit better on our second house, but this one cut it close,” Ida laughs. In addition to the living trees that lend support to the structure (load-bearing stilts carry additional weight) there are several end tables made of raw sections of trunk, freshly cut with bark still in place, arranged in useful places around the deck and topped with potted geraniums. As I chat with Ida about their design schematic—“We all have similar design sense,” she says of the Scandinavian-chic dwellings— Loren interrupts to direct our attention skyward. “A bald eagle,” he says with a note of reverence in his voice.

The second and third homes are similarly nestled into nature, yet these structures benefited from the foursome’s experience building the first. One fantastic addition are the swinging rope bridges (designed, like every detail in the space, by Marsha) that connect the kitchen, bathroom, and living area to the bedroom. “When we started out, we were focused on keeping everything as affordable as possible,” Loren says. “But as we went along, we began to elevate the design. By the end, we were doing all custom kitchens and baths, with custom cabinetry.” As Marsha explains it, the biggest design challenge was to “create an interior space with clean lines and minimalist decor that gave a sense of tranquility and openness to the trees outside without impeding functionality. This led to things like designing a hanging closet into the headboard.”

Instead of imposing limits on their creativity, Loren says that the dwelling’s small size encouraged them to dream big. “I wanted to use our creativity instead of monetary resources to build a truly interesting  space,” he said. “From the beginning, it was important to me that we build something that people would talk about. It’s those places you remember—the weird ones, like the bar with a secret arcade in the back.” The tree houses also tap into the national trend of choosing experiential purchases over material ones. Tree dwellings, as Loren intuited, provide fodder for dinner party stories and a scenic backdrop for family photographs. Before the first tree dwelling was even in place, dozens of people on Airbnb had already booked the room. (After I visited the Seguin Tree Dwellings, I went online to book my own stay, only to find that summer 2017 was entirely blocked out for all three houses.)

While rentals will play a large part in the future of the tree dwellings, Loren, Ida, Marsha, and Philip hope to use the space for another purpose during the shoulder seasons. “We have a dream of creating a gathering space for artists and students. We may not build more tree houses, but we do want to build another place where people can come together,” Ida says. “It was the real impetus behind the project,” Loren adds. “We didn’t build these to make money. Our goal was to create something interesting and beautiful, and possibly a place where we could host other creative people.” Artists could use the forested seclusion to disconnect from their daily lives, drawing inspiration from the natural landscape, perhaps gaining a new perspective from their perch in the trees.

“Already, a number of people who have visited have said they felt reinspired to bring creativity back into their own lives,” Marsha says. “I’ve been so moved by how much the tree dwellings have already meant to people.” In particular, she recalls one entry in the guestbook that made her feel as though all the hard work, all the effort they put into constructing these elevated houses, was worth it. The guest wrote, “‘Sometimes in your life, you find a place you needed to be, and that place can help heal your soul.’ That,” Marsha says, “meant so much to me.” 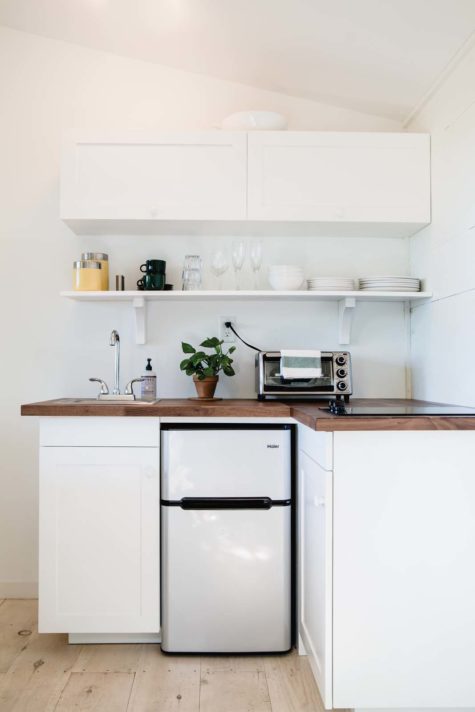 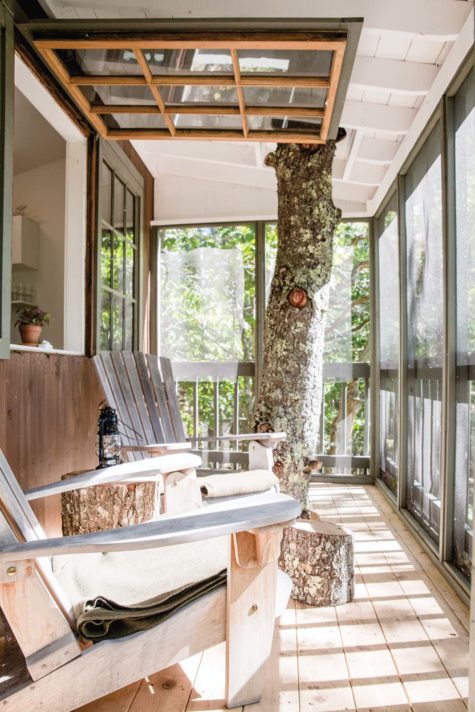 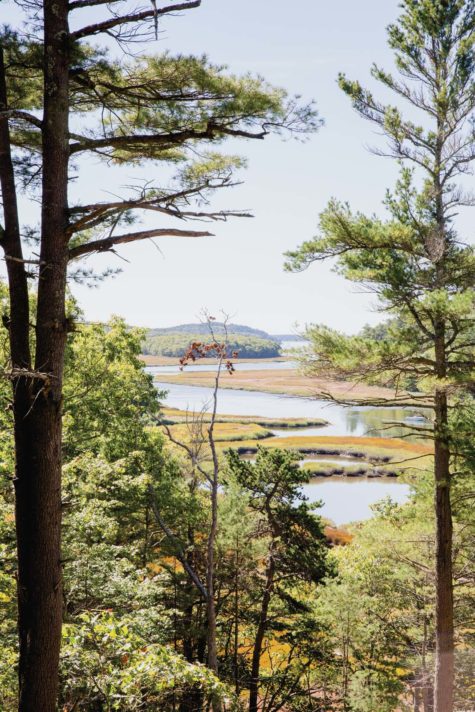