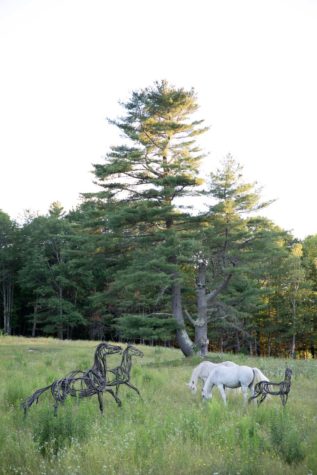 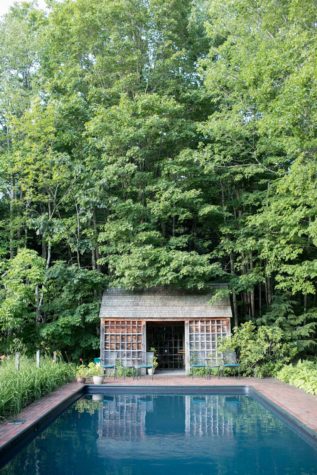 The pool and pool house are a favorite hangout for the grandchildren. 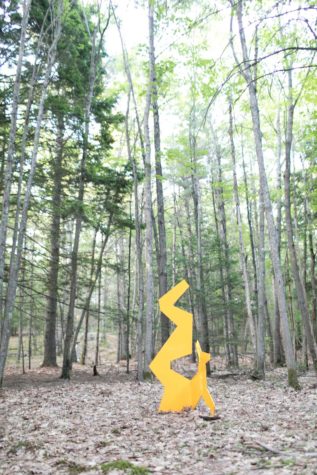 A sculpture by Stephen Porter along the woodland trail. 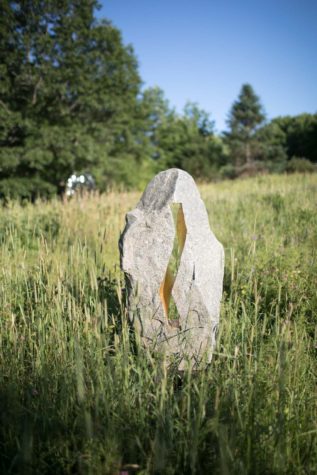 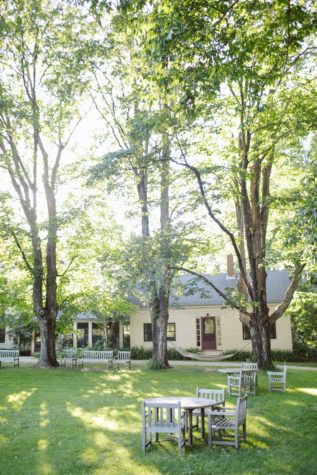 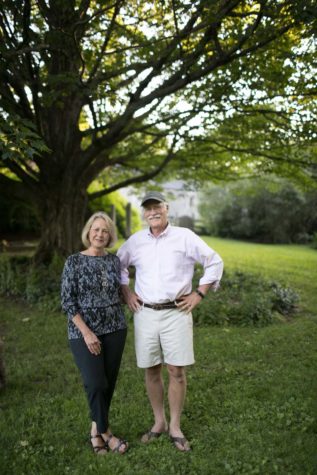 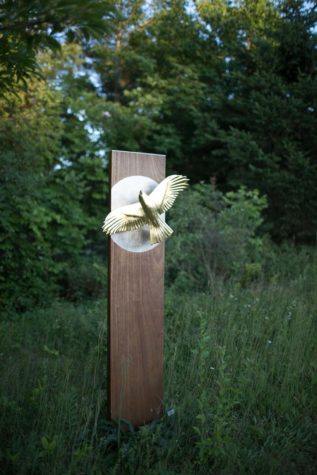 At Home On Hawk Ridge

Bill Ginn and June Lacombe on art, energy, and the environment

Not far from Bradbury Mountain, in the woods of Pownal, is a small homestead located at the end of a dirt road. A broad swath of lawn edges up against a carefully laid garden, featuring hay-cushioned rows of beans and zucchini. The wind rustles the tall grass next to a red barn and carries with it the discourse of poultry from behind an ancient maple. Look more carefully, and you will see a curious interplay between real and imagined. A bronze goat casts a wary eye, while a steel porcupine takes shelter beneath a bush. Called Hawk Ridge Farm, this perspective-shifting space is the home of June LaCombe and William “Bill” Ginn, who have spent a lifetime trying to take a broader view of the world, while creating an existence that supports their values.

LaCombe, an independent arts consultant, and Ginn, executive vice president for global conservation initiatives at the Nature Conservancy, began rebuilding Hawk Ridge 40 years ago. LaCombe and Ginn were drawn to the 1848 Greek revival Cape and barns that they describe as “melting into the ground” at the time they bought it. “We wanted to raise our food,” says LaCombe. “We had small kids, and we were living on the land. We made choices based on ethics.” They ran Hawk Ridge as a working farm for more than two decades—with more than 100 sheep at one time.

LaCombe and Ginn first met while working at Maine Audubon’s Gilsland Farm in Falmouth. Ginn was the assistant director; LaCombe was the director of education and a naturalist who helped plan the center’s trails and gardens. They shared a passion for the environment and a longstanding affinity for the Pine Tree State. Ginn’s father came from Delaware to study at Bates College in Lewiston. When World War II broke out, he joined the U.S. Army and ended up meeting a girl from North Dakota. They married, and she helped him pay for the remainder of his education by working in the research department of the Bates Woolen Mill in Lewiston. After graduating from Yale Law School, Ginn’s father worked as a lawyer in Cleveland, Ohio, where Ginn was born and raised. Ginn returned to Maine to attend the newly founded College of the Atlantic in Bar Harbor (after transferring there from Amherst College in Massachusetts). He was one of two people in the first graduating class of 1974.

LaCombe grew up in North Yarmouth. Her father was a registered Maine Guide and the superintendent of schools for Cumberland and North Yarmouth. LaCombe’s mother, an organic gardener and environmental activist, worked in the research department at Maine Medical Center in Portland. LaCombe and her two sisters grew up skiing at Sugarloaf and navigating the family’s Lyman Islander down the Royal River for picnics on the islands of Casco Bay. “We lived really the best life one could live in Maine,” says LaCombe. “And we had the sense that we could do anything.”

LaCombe would go on to earn a degree in environmental education and art from the New College in Tuscaloosa, Alabama. Always interested in creative pursuits, she was originally a weaver. While working at Gilsland Farm, she organized her first show in sculpture with abstract avian pieces by Edwin Gamble. LaCombe went on to do graduate work in this field, including doctoral research in environmental art at Antioch University New England in Keene, New Hampshire. “Art has always given heart to environmental issues,” says LaCombe, who has spent more than 25 years specializing in New England sculpture. “It really does empower each individual who lives with art and creates art.” LaCombe has curated exhibitions across Maine, including several at the Coastal Maine Botanical Gardens in Boothbay and the Wells Reserve at Laudholm in Wells. This year’s show at the Wells Reserve, Power of Place, runs through October 17 and features 65 sculptures in granite, steel, marble, and bronze from artists such as Jac Ouellette, Cabot Lyford, Stephen Porter, and Kate Cheney Chappell. “I really feel that sculpture can help reveal a sense of place,” says LaCombe, describing the rolling fields and distant crashing surf at the 2,250-acre national estuarine research property.

For more than a quarter of a century, LaCombe and Ginn have invited people to Hawk Ridge to enjoy yearly sculpture shows and accompanying festivities on their property. LaCombe combined this summer’s 125-sculpture exhibit, called Embracing Earth, with a series of “maple tree talks,” which addressed art and sustainable living under the same towering landmark beneath which her daughter was married. “People have to care about something in order to change,” says LaCombe. “Loving something provides a spark and ignites a shift.” On the summer solstice, LaCombe and Ginn hosted a contra dance and a pie potluck, which brought 75 people to the farm. In July, qigong master Ken Ryan led a group of 45 individuals in the traditional Chinese movements that generate life force—or qi—as a kinetic sculpture by George Sherwood called Wind Orchid rotated gently near the back fence. LaCombe says that the family’s peacock chimed in with occasional shrieks during the exercise. “He is very tuned into changes in energy,” says LaCombe. “Especially my energy.”

At the entrance to Hawk Ridge is an abstract piece by Gary Haven Smith, for whom LaCombe curated a solo show at the Ogunquit Museum of American Art this year. “I would no more sell this particular piece than I would sell my own cat,” she says. LaCombe wants her clients to love their sculptures as much as she does. “When I go to someone’s house and think about where they might place sculpture, I sit at their desk, I stand at their kitchen sink, and I sit in their favorite chair and look out the window, and that’s where one might place a piece of sculpture.”

In the woods across from Hawk Ridge is a forest path that LaCombe once traversed with her now-grown children, Eliza and Will. On the side of the trail, LaCombe points out two undulating person-sized sculptures called Fiddlehead Chaise and Chaising Waves, carved from tapestry granite by Pownal artist Jordan Smith and large enough to lounge on. “Granite is the bedrock of Maine,” says LaCombe. “There is a powerful connection between the material, the artist, and the placement of sculpture. Sculpture on the landscape creates a relationship with its place. It connects the earth and sky.” In contrast to these mammoth pieces, which required a hydraulic lift for their installation, is a delicate wire and bead sculpture by Jean Noon. Called Seed Pod, it hangs like an oversized butterfly cocoon from a tree branch nearby. LaCombe says it is especially brilliant when highlighted by the rays of the sun. “There is something magical about the changing of the seasons and how the elements interplay with sculptures outdoors.” The show also includes work by sculptors Lise Becu of Tenants Harbor and Jesse Salisbury and Kazumi “Hoshi” Hoshino of Steuben.

Ginn, who has a degree in landscape architecture from the Harvard Graduate School of Design, founded an organic recycling company called Resource Conservation Services, Inc., which he sold in 1992. He subsequently wrote a book titled Investing in Nature: Case Studies of Land Conservation in Collaboration with Business. Since 1996, Ginn has served in various positions within the Nature Conservancy, including chief conservation officer. “For me it was a lifelong passion that came from a small child being out in the woods and seeing the impact of development on places that I cared about,” says Ginn. “I certainly fell in love with the environment here in Maine, but I have come to greatly appreciate the vast complexity and diversity of the world’s environment, and how important that is to all of us.”

Ginn and LaCombe are doing their part to use resources wisely. Four years ago, Hawk Ridge became entirely solar-powered, thanks to modifications done by ReVision Energy. This conversion has been so successful that there is enough additional electric energy to run fans that keep the flies off their horses in summer and heaters that keep the water in the peafowls’ cages from freezing in the winter. As of this past June, the solar panels had created about 4,000 kilowatt-hours of excess power, and they plan to purchase an electric car. “We’ve tried to be conscious about how we live because we are connected to the rest of the world,” says Ginn. “We’re not hiding in the backwoods.”

Ginn and LaCombe also own a home on Eagle Island in Penobscot Bay—one that they originally designed on a napkin. From the beginning, they powered all of their refrigeration, communications, electricity, and lights using a solar-power system. They estimate that they have only run their backup generator on the island once or twice in the last 10 years. “Systems get better and more reliable,” says Ginn. “We made a lot of improvements and today it’s just as relevant, and even better, than it was 25 years ago when we started.”

Ginn and LaCombe have seen many things evolve in the decades since they first met at Maine Audobon. They’ve raised their children, avidly pursued their vocations in art and environmentalism, and continually transformed their habitats. Through it all, these former back-to-the-landers have attempted to maintain a bird’s-eye view of the larger world from their home at Hawk Ridge. “It does resonate to take care of our own garden, to take care of our own place on Earth,” says Ginn. “It’s what keeps us sane and happy and fulfilled.” 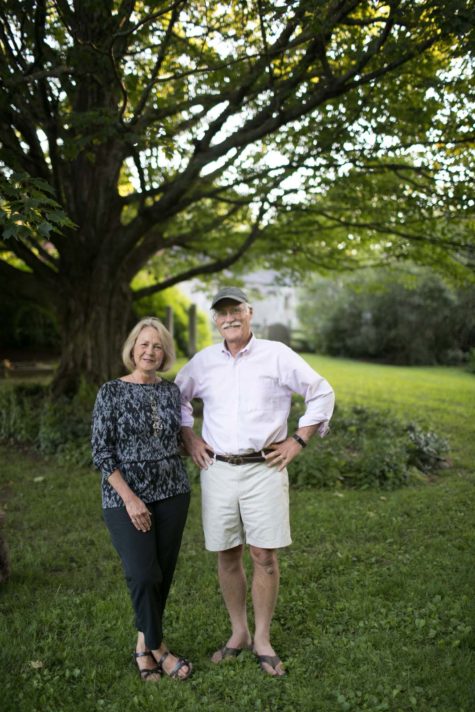 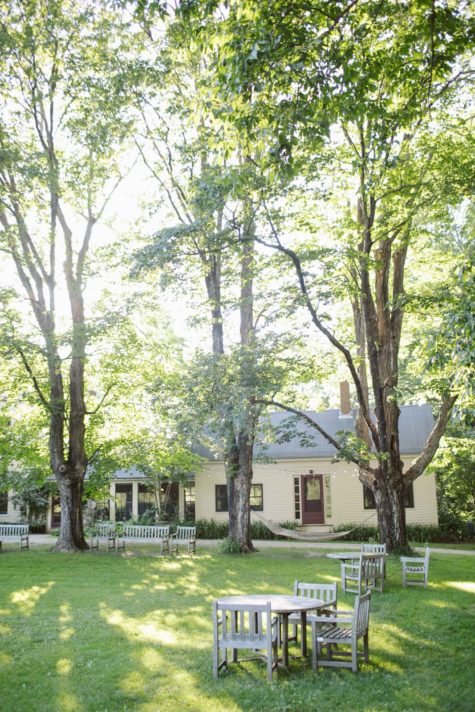 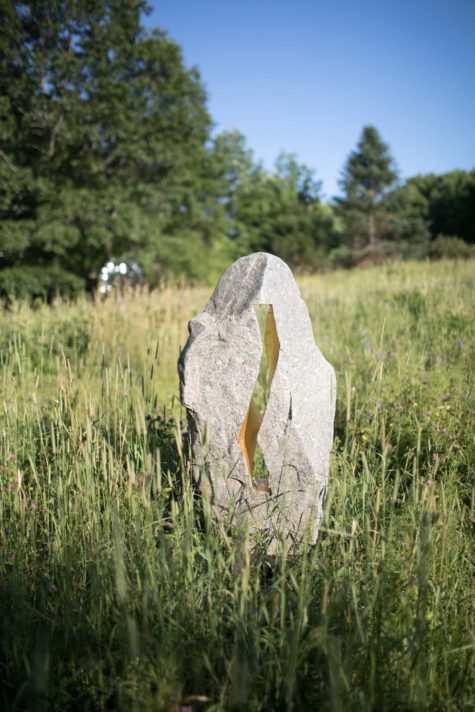